By the time Arvid Ehrmantraut celebrated his 83rd birthday just after Thanksgiving in 2007, he had lived a full, fulfilling life.

Like thousands of his generation from the Flint area, Ehrmantraut served his country in World War II without hesitation before returning home and spending decades working for General Motors, rising to the rank of foreman. Along the way, he married twice, the first time at age 19, and raised three children with first wife Helen before her death in 1994. He found love again with second wife Marilyn, until she passed away in 2005.

As the holiday season approached two years later, however, Ehrmantraut’s children were understandably concerned about the unfortunate turn their father’s life had taken. Unable to care for himself after suffering a stroke, Ehrmantraut was living with one of his daughters. He struggled to communicate.

That’s when Greg Gorton entered the twilight of Ehrmantraut’s life.

In his third year as a caregiver with Right at Home In Home Care & Assistance of Grand Blanc, Gorton began caring for him on an almost-daily basis, easing the burden on his family as the two formed an immediate bond. A routine of breakfast followed by watching a western movie soon developed. One day, Gorton noticed that Ehrmantraut was energetically responding as a cowboy strummed a mandolin in one of the films. Gorton, who had spent years as a musician playing several instruments in bands and even on cruise ships, felt compelled to point something out. “I turned to Arvid and said ‘I can play better than that guy’,” he recalls.

Ehrmantraut seemed to light up when Gorton walked in with a mandolin on his next visit, sat down and began playing. “He just came to life in his chair and it was like he wanted to do a cartwheel or jump right out of his body,” Gorton says. “It was amazing. Later, his daughter said ‘you don’t even know what you did for dad’ because her parents loved to go square dancing in their younger days.” The pamphlet distributed at Ehrmantraut’s funeral on May 19, 2008 featured a photograph of Gorton playing mandolin beside his appreciative client. “That was so sweet,” says Gorton with obvious emotion in his voice.

Gorton’s time with Ehrmantraut is just one example of the countless lives he has touched during 17 years with Right at Home. Last fall, Gorton was named the Home Care Association of America’s 2021 Caregiver of the Year for the tireless dedication, deft touch and loving patience he brings to an often challenging, thankless and emotionally-draining role. Gorton was stunned. He had never even heard of the award he had emerged from a field of nearly 250 nominees across 41 states to earn.

“It all started about the third week of September when Leslie (MacDonald), who worked in our front office, called to say I was one of ten finalists for this national award which blew me away because I didn’t know the award existed,” Gorton shares. “The next week, I was told to be at the office at 11:30 a.m. that Friday with scrubs on. I had no idea what was going to happen.”

Gorton arrived at Right at Home headquarters that morning, rounded a corner, entered the main office before the sight of balloons, smiling co-workers and ABC12 cameras briefly stopped him dead in his tracks. Gorton then lifted his hand to his chin, flashed a smile and slowly walked into the room as Right at Home President Scott Hill announced he had been selected Caregiver of the Year. “I was surprised to see Channel 12 there and all the attention was suddenly on me like I was a king or something,” he laughs. “I don’t look for recognition or awards, but it’s very humbling to be honored in this way.” 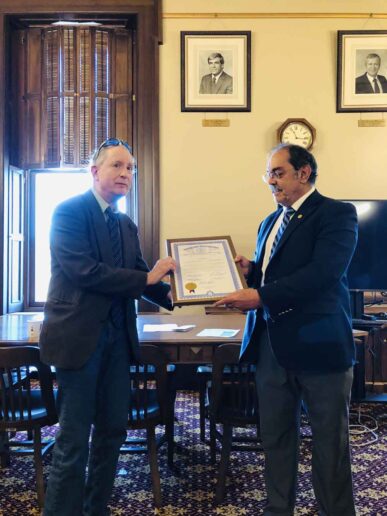 Hill was not surprised to see Gorton honored in that way after nominating him. “Our office staff engaged in conversation and debate about which caregiver we should nominate,” he says. “In the end, we felt that Greg embodies, in a special way, what this award represents. When we found out he was a Top 10 finalist for an award representing thousands of caregivers across the county, we were thrilled even with that! When we found out he was named the country’s top caregiver, we were so proud that all the office staff members had tears in their eyes.”

Gorton received the award during a formal presentation at the State Capitol in Lansing on November 3 as part of an HCAOA Michigan chapter meeting. In addition, Tim Sneller, Gorton’s State Representative, presented him with a signed proclamation on behalf of the state legislature and Michigan Governor Gretchen Whitmer. “It was just a cool experience being at the Capitol for the first time in my life and meeting so many people, especially other home care agency owners,” Gorton says. “It was nice to talk about why we all do what we do. We fill an important need.”

HCAOA Executive Director Vicki Hoak and Right at Home CEO Brian Petranick were also in attendance. “It was an honor to present a tribute to Greg Gorton as he received the 2021 Caregiver of the Year Award,” Sneller later wrote on Facebook. “His commitment and compassion for his patients is unmatched. He works incredibly hard to ensure that patients feel comfortable and receive the highest quality of care. Thank you for all you do for our community.”

Gorton acknowledges how difficult and even dirty his job can be, but prefers to focus on how rewarding it is. “God has really blessed me to be able to do this work, making people’s lives and the lives of their families better through compassionate care and empathy,” he says. “It’s so gratifying to see people light up when I come into their homes. I think of this as missionary work I’ve been called to do.”

Gorton is full of stories about memorable clients he has served. There was a retired surgeon who worked at Hurley Medical Center for nearly 40 years and a couple, ages 100 and 98, who reached their 77th wedding anniversary prior to the husband’s passing. “That guy worked at Kettering University when it was General Motors Institute and was still so sharp at 100,” Gorton says. “I’d ask him a question and get a Library of Congress answer.” He sometimes worked 16-hour shifts caring for a former Navy Seal who had also been an all-state football player and wrestler as well as his high school’s valedictorian before being partially paralyzed in a car accident. “He was in a lot of pain some days,” Gorton recalls. “That was tough to see.”

Gorton also shared a moving moment he witnessed while providing hospice care. “There was a couple there who had been married a very long time, but now one was in hospice and the other had Alzheimer’s disease, yet they still connected by holding hands,” he says. “Really sweet.”

Gorton even found a way to connect with a patient at Kith Haven Nursing & Rehabilitation in Flint who had been in a catatonic state for about five years. First, the man opened his eyes as Gorton was fixing his bed and later, Gorton got him to lift a hand from underneath his blanket and give a thumb’s up. Finally, Gorton decided to tickle his feet in the same manner his father once did when it was time to get out of bed. “He laughed so loud, everybody heard it,” he says. “The nurses had never seen him do anything like that.” 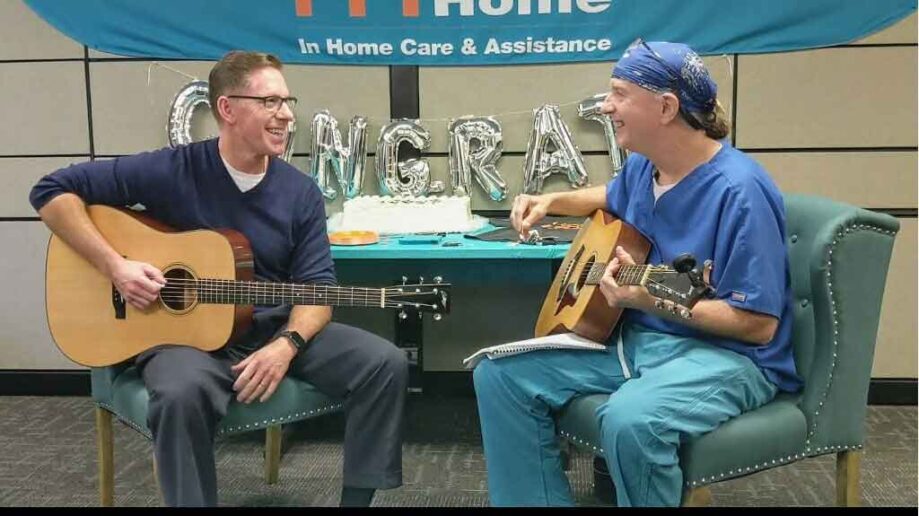 Gorton has also worked in sales and as a taxi driver in addition to his music gigs, but was ready for a change after taking a nurses aide class at Baker College in 2005. “I just opened up the Yellow Pages and there was a half-page ad for Right at Home,” he says. “I was down to my last $100 and had no experience, but I contacted them and they gave me a chance. It didn’t take long to realize this was the kind of work I was looking for.”

These days, caregiving does not end for Gorton when his shift does. He also cares for his elderly mother in the Grand Blanc home they share with one of his sisters. The grind does not seem to faze the 63-year-old Gorton, who maintains an unmistakable passion for his work and has given little thought to retirement. Scott Hill, who can’t imagine Right at Home without Gorton, is thankful for that. “Greg will tell you the purpose of his life is to utilize his skills and talents to help spread the love of God around this crazy world,” he says. “Sometimes, people find themselves in very difficult situations requiring help and this is exactly where Greg has a positive impact on the lives of our clients. He does this every time he walks into their homes.”

Photos provided by Right at Home In Home Care & Assistance