Ed Watkins is always listening, thinking, paying attention to the world around him. All the available information is taken in, sorted, analyzed, understood, extracted and then represented visually for himself and those around him. Each illustration he creates is a window into his world – a world of hope, fear and confidence, of anxiety, struggle and peace. It is evidence of a world of his experience, of the African American experience and of our collective humanity. It is a world only he knows and with each drawing, he provides just the briefest glimpse of a perspective different from our own. “My art develops as the world develops,” he explains. “Much of my work is about me making sense of the world around me through my experience as a Black man in America.” 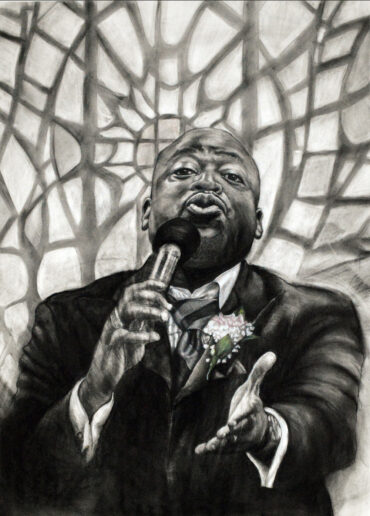 Preach Turner, 2019.
“This is the first piece in the ‘preach’ series and it evolved over 18 months of writing and doodling. I met each preacher in my series and asked for permission to create the image and they all just loved the idea.”

Born and raised in Flint, Watkins graduated from Flint Southwestern High School in 1968 and seemed destined to follow the path to the factory like so many others in the city. That’s when a school guidance counselor bluntly told him he was “not college material’.” His trajectory changed, however, after competing in a high school track invitational at Bowling Green University in Ohio. “I took first place in the 100m and 200m races,” he recalls. “The Bowling Green track coach talked to me about running for the university. It sounded great – I thought it could be my only chance.” The coach asked Watkins what he wanted to study and the young man had no idea. “I told him I liked to do art stuff and he said I would be an art major. I was cool with that,” he laughs. 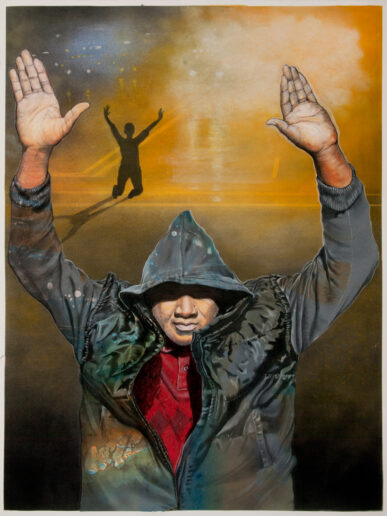 Surrender Jonesy, 2015.
After the fatal shooting of michael brown in Ferguson, Mo, ‘hands up, don’t shoot’ became the rallying cry at protests across the U.s.

Art was never something Watkins thought much about while growing up, only realizing his love for the subject in fourth grade. “I learned to draw a horse from someone in my class,” he adds, “then, I was drawing horses all over the place.” Watkins continued drawing through his high school years without a thought as to its potential. It was during his college years that he fully embraced his talent. He made plans to become an art teacher, influenced by a former teacher John Nash and his first teaching experience during the summer before his first semester, working in art activities on the children’s wing of Hurley Hospital. “I loved that job,” he smiles. “I still remember hearing the children yell ‘the play man is coming!’ when the elevator doors opened.” 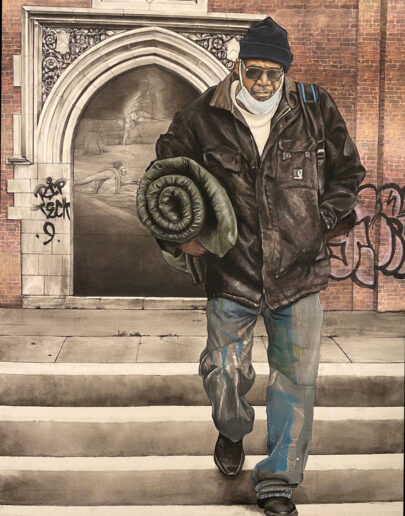 Pick up your bed…, 2021. This piece was inspired by a sermon about the pool of bethesda in israel as recounted in the gospel of john (5:1-8).

In college, he met his future wife Marcia, honed his talent and was ready to graduate until life threatened to change his plans. “I got drafted in 1972 and at first, I was headed for Vietnam,” Watkins recalls. “Instead, I joined the Marine Corp. Reserve and was given a six-month delay before I had to report.” He received his Bachelor’s in Art Education and finished half of his Master’s in Education course work before attending boot camp training. After his training, he returned to Bowling Green. Watkins married in 1975 and took a corporate job before he and Marcia decided to return to Flint in 1977 to teach young artists, raise a family and create art. They both worked at Beecher High School, Marcia teaching ceramics while he worked in alternative education. Watkins then found a professional home at the Genesee Area Skill Center when he was hired to teach drawing and photography part-time. He became full-time in 1984 when he introduced one of the area’s first graphic design classes for high schoolers. In the late 80s, he was one of the first to offer a computer graphics class. He started teaching at Mott Community College in 2006 and a year later, began pursuing a Master’s in Studio Art at Eastern Michigan University with a focus on mixed media, collage and printmaking. In 2012, he retired from the Skill Center and retired from teaching at Mott last year. “During the pandemic, all of my classes were remote and it wasn’t for me. I decided it was time,” he says. 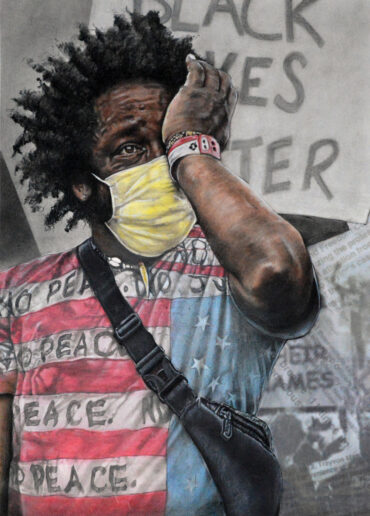 Breathe, 2020. This piece depicts tristan taylor, organizer of the “detroit will Breathe” march.

The last few years of social upheaval, the pandemic, isolation and unfilled time have provided Watkins a constant source of anxiety, hope and inspiration that is reflected in his recent art. “My family has always been culturally and politically active, participating in the Civil Rights march in Detroit and the open housing protest in Flint,” he explains. “It made me who I am today. Images of my present and my past stick in my head, and my art is an attempt to pull those ideas out and understand them. I have always been a visual learner.” 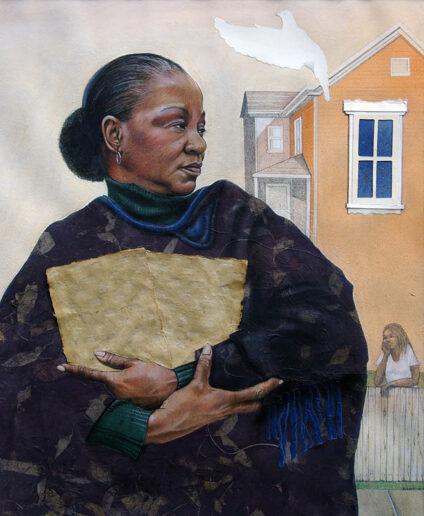 Marcia@908, 2008.
“My wife is the centerpiece of this drawing, depicting her at her childhood home in ohio. In the background is a young marcia dreaming of the world beyond the fence.”

“The exhibit is about what I see, hear, encounter and a response to the social issues I deal with as an African American man.”
ED WATKINS 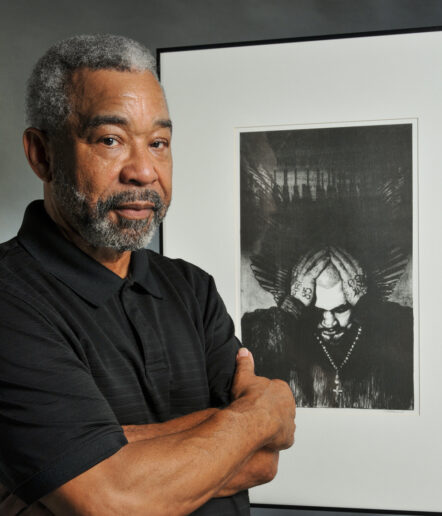 From beginning to end, his process is a long and winding path. It starts with listening and words that slowly develop into the images he creates. “I read and listen to news and pay attention to what is going on,” he explains. “I take notes and combine them with scribbles and doodles until I center on a final image. Then, I choose my medium.” For his recent works, Watkins took inspiration and images from the Ferguson protests, Black Lives Matter, George Floyd’s death, racial divide and other social issues, as well as singular moments in time that represent the experience of living in America. Many of the illustrations can be viewed in his exhibit featured at the Flint Institute of Arts. “The exhibit is about what I see, hear, encounter and a response to the social issues I deal with as an African American man. These illustrations helped me understand and get through the isolation and anxiety of the pandemic,” he states. 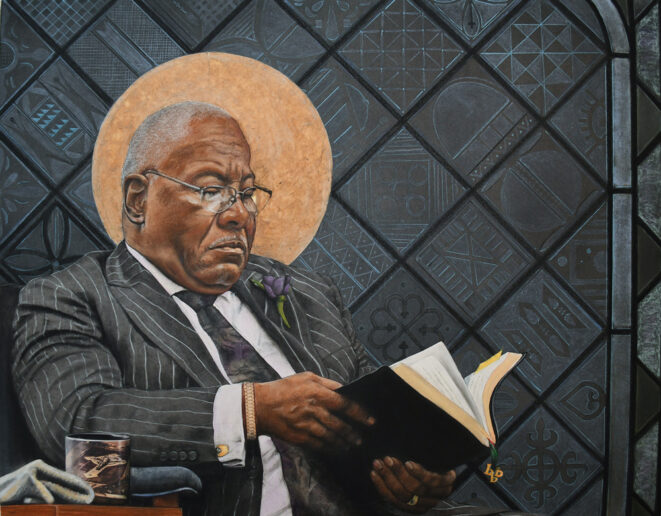 The art of Ed Watkins is much more than what it seems at first glance. It’s filled with symbolism, the images chosen precisely to convey an internal emotion or meaning. It’s a snapshot of life – another viewpoint and a representation of a culture that continually strives for justice and understanding. It’s a way for Watkins to assess and understand the world in which he lives in the best way he knows – through a constant evolution of expression and illustration. “Sometimes the process takes years from idea to final work and it is constantly changing. I enjoy the journey.”