Davison native Caitlin Hinterman has had an exciting life during her career with the U.S. Army Reserve. She recently obtained a very high honor when she was promoted to Lieutenant Colonel and is currently serving as the Aide de Camp to four-star General Jacqueline Van Ovost.

A graduate of Davison High School, Hinterman was attending Central Michigan University (CMU) when she realized she was uncertain as to what she wanted to do with her life. Each day as she walked to classes, she passed by the Army Recruiting Station where one particular recruiter would be standing outside, taking a break. “Every single day, he asked me, ‘Want to join the Army?’” she shares, “and every day, I would say, ‘Nope!’”

Still not quite knowing what path she wanted to take, Hinterman finally put some thought into joining the Army. She was athletic, having played a variety of sports while growing up, and a couple of her friends had joined the U.S. Marines. “I finally walked up to that recruiter and told him, ‘‘I’m ready.’” 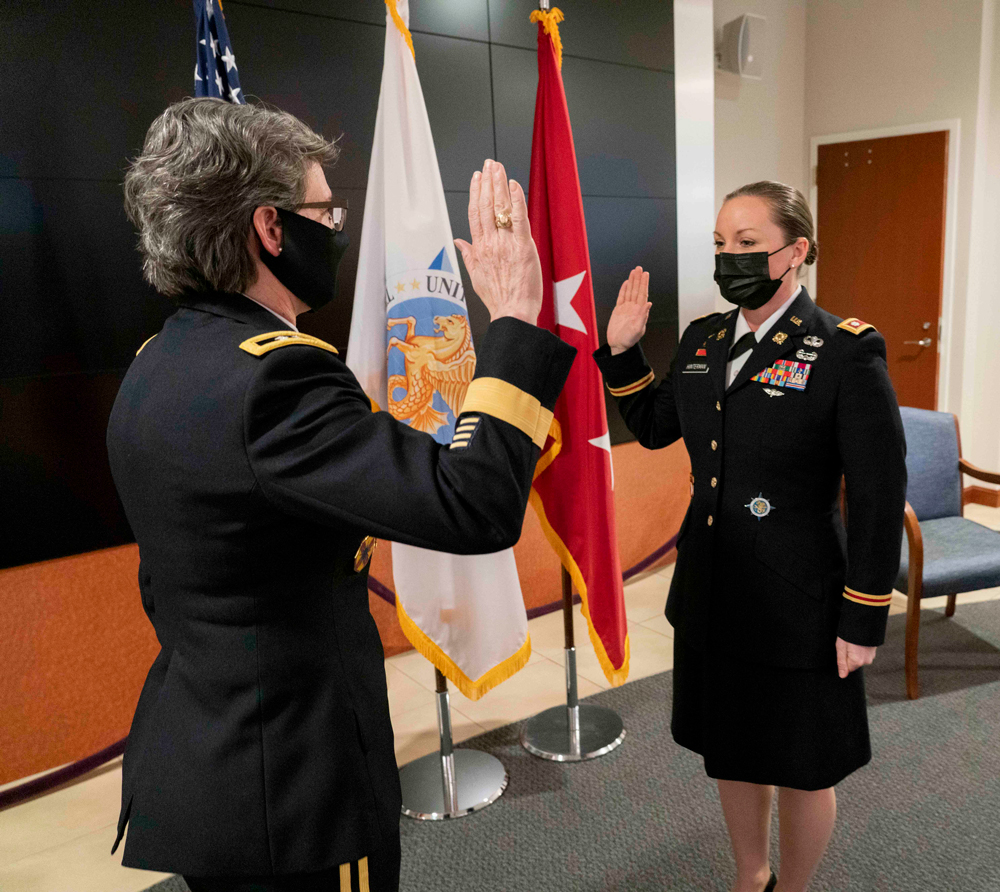 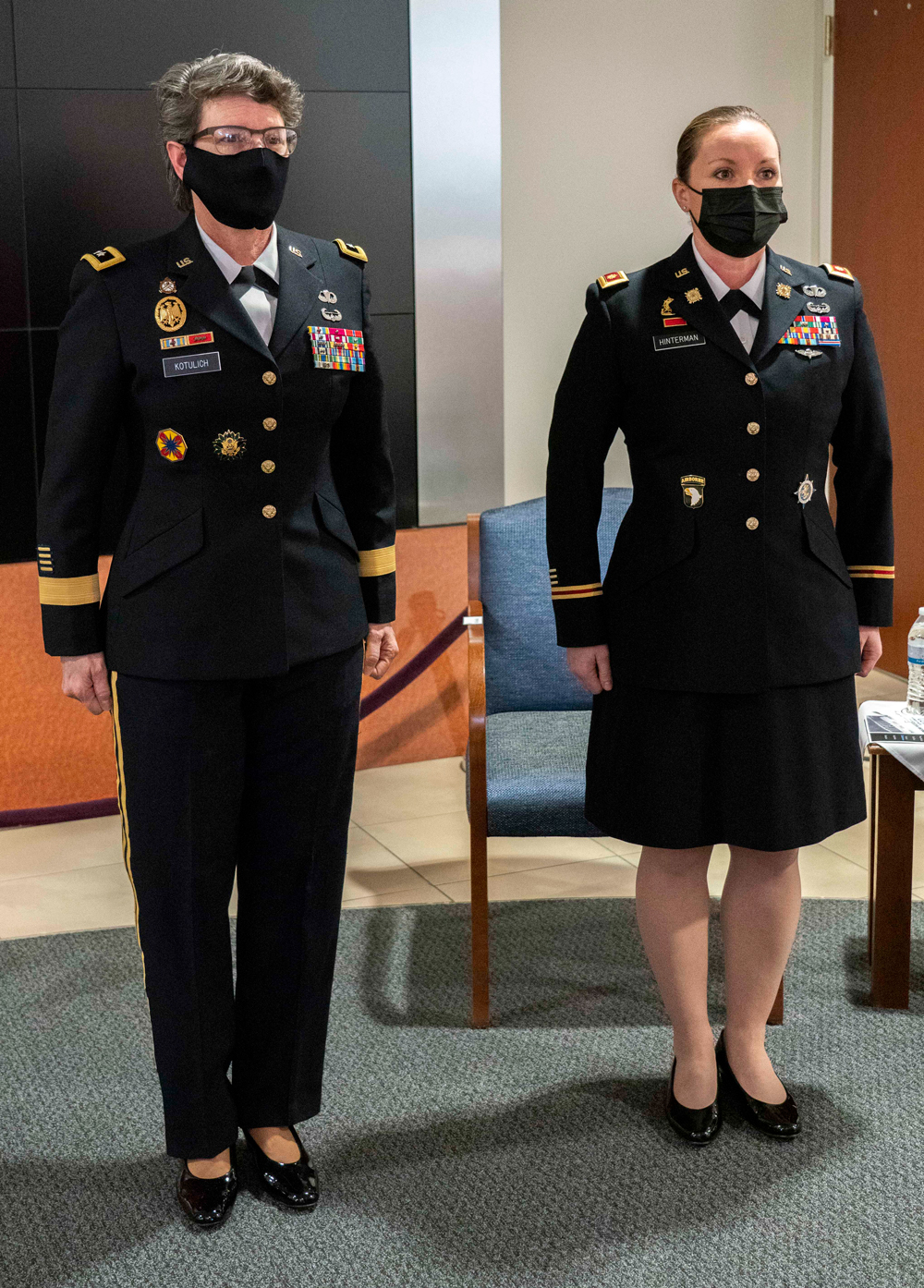 In May 2001 at the end of her freshman year, Hinterman joined the U.S. Army. She didn’t quite know what to expect but knew that Basic Training would be tough. “But I like challenging things,” she says with a smile.

The daughter of Dennis Hinterman and Wanda Baird, she has three brothers and three sisters – a big, blended family. And telling her family about her decision was a little overwhelming. She told them she had enlisted in the Army and would be leaving for boot camp in a few weeks. “Their reaction was not great,” she remembers. “But I’m happy that I made that decision,” she admits. “It was the right path for me.”

Hinterman trained at Fort Leonardwood, MO from May-August 2001. She returned to CMU to finish college and joined the Army Reserve, and her first job was Motor Transport Operator (88M) while she continued taking classes at CMU.

Hinterman liked her job but wasn’t fond of being told what to do. “Then, you need to become an officer,” her platoon sergeant told her. She listened to that advice and started Reserve Officer Training (ROTC). After graduating, she signed a contract to become an officer. “Everything was falling into place,” she remembers. When she graduated from CMU in 2004, she was promoted to Second Lieutenant and began serving in the Army Reserve one weekend a month. 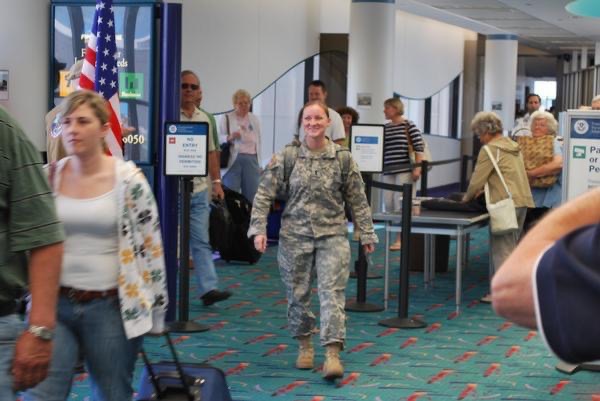 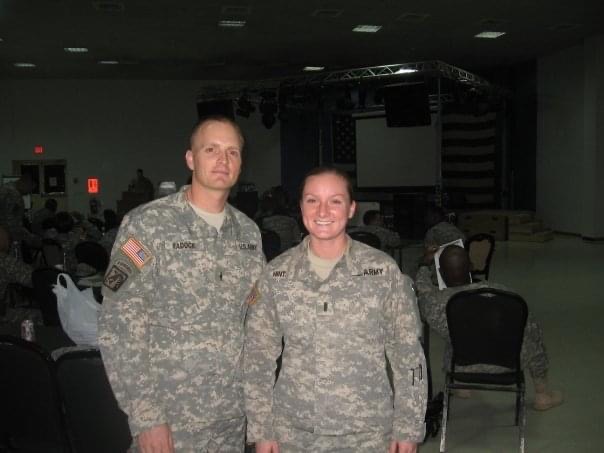 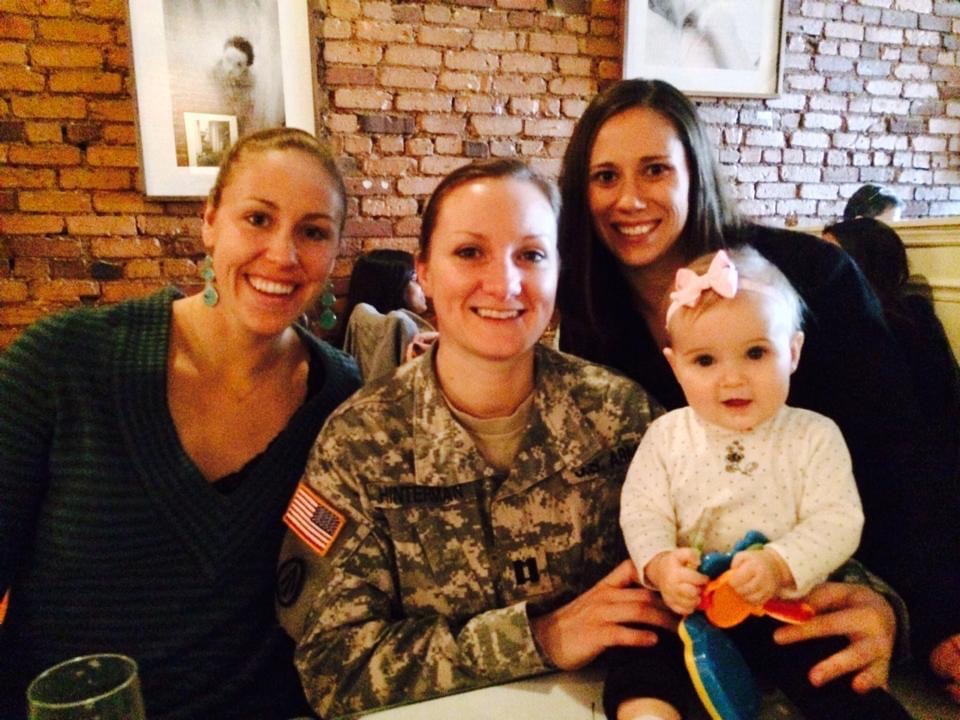 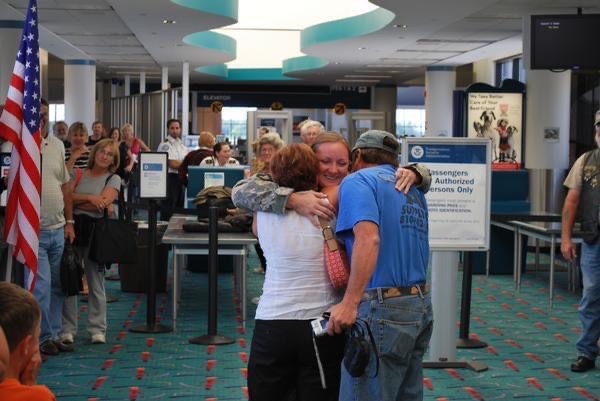 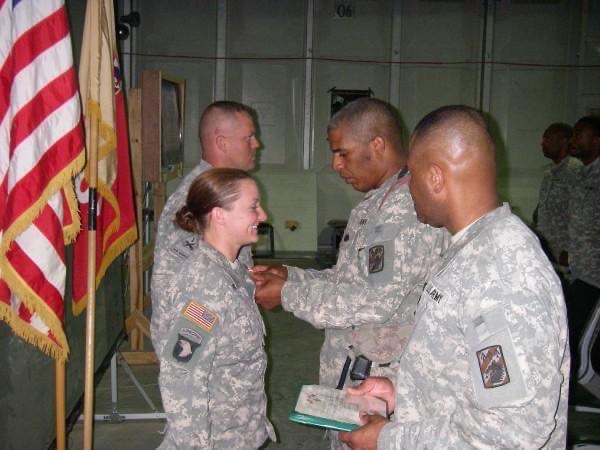 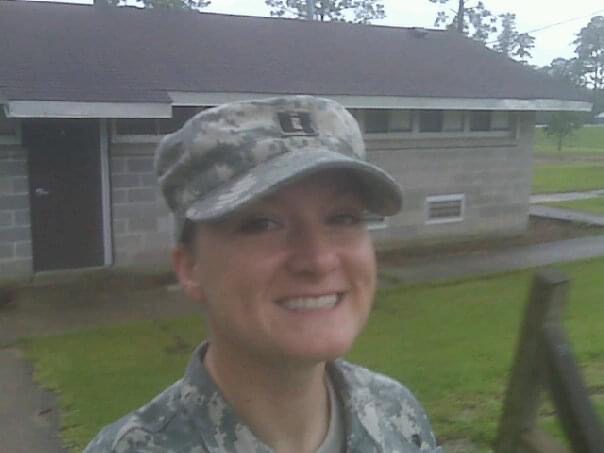 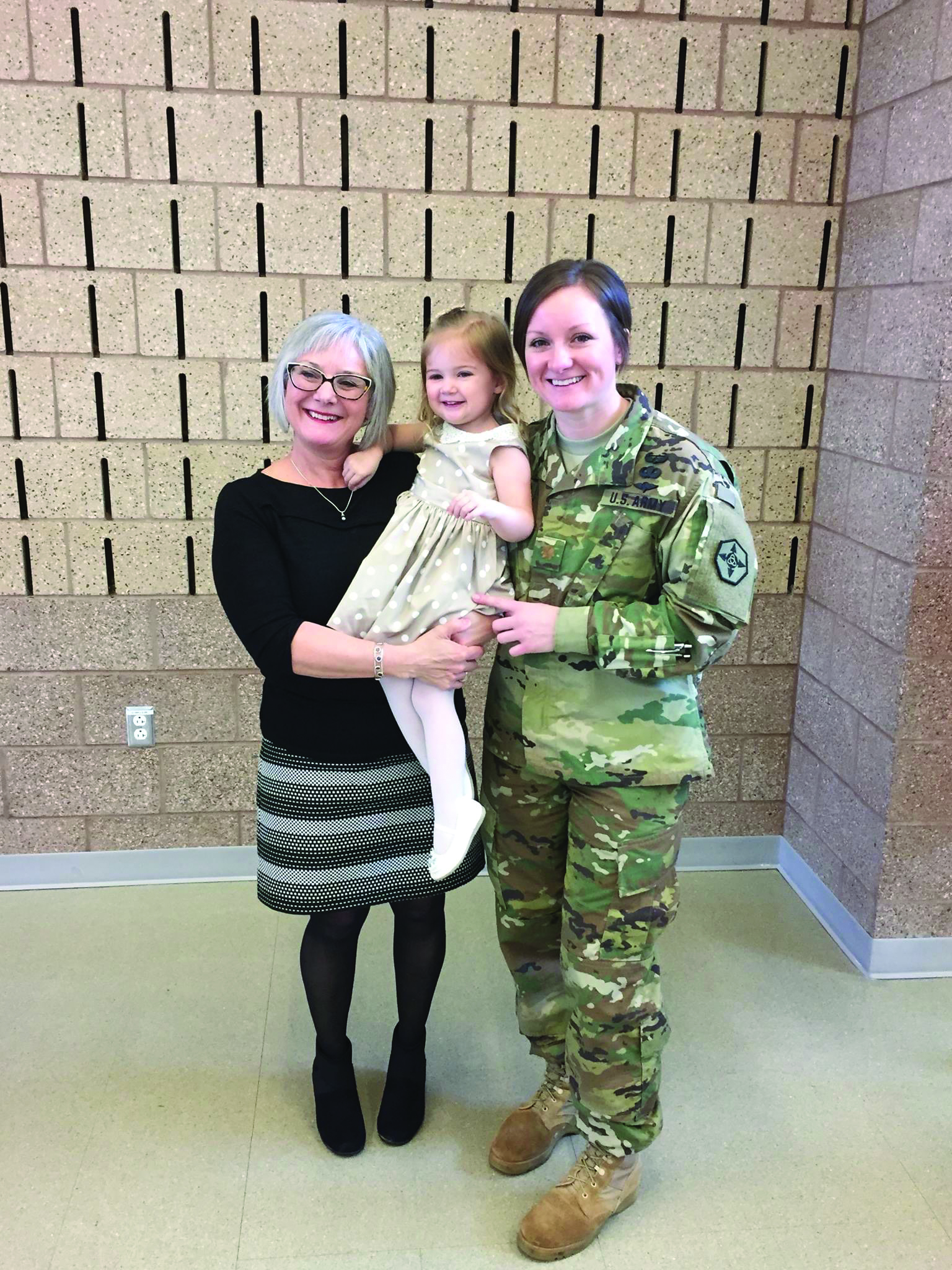 In 2007, Hinterman was deployed to Iraq for a year. “I was a Postal Platoon Leader,” she explains, adding that she ran a Post Office. After returning home from deployment, she remained in the Army Reserve and continued serving one weekend a month. “But the job was more than one weekend a month,” she states. “I always ended up doing more.”

In 2009, Hinterman joined the Active Guard Reserve Program (AGR) which placed her on active duty. “I was on active duty but supporting the Army Reserve,” she states. As a Plans Officer, she deployed a couple months later to Kuwait, where she served for ten months at the Port of Ash Shuiaba loading military cargo to be sent back to the U.S. in support of the Iraq drawdown.

In 2011, Hinterman was selected Commander of 231st Inland Cargo Transfer Company (ICTC) in Athens, GA. “It was quite an honor,” she admits. “Command is one of the best jobs in the Army, but also the most difficult. The job was not on an Army base, but I still worked for the Reserve and commanded Reserve units.”

Hinterman’s next duty station was in Marysville, WA, assigned as an Operations Officer at the 364th Expeditionary Sustainment Command. There, she met her future husband, Joe Brickles.

In 2016, she was promoted to the rank of Major and selected to attend Command and General Staff College (CGSC) at Fort Leavenworth, KS, a school not offered to all AGR officers. After a year at the CGSC, she received a nominative position to Human Resources Command (HRC) as an Assignment Officer at Fort Knox, KY. “I’ve never lived anywhere for more than two and a half years,” she says, laughing. “We just keep moving.”

In 2018, Hinterman was selected to take another command position in New Jersey at Joint Base McGuire-Dix-Lakehurst (JBMDL). Then in 2020, she received orders to work as the Executive Officer to the Chief of Staff, Major General Deborah Kotulich at Scott Air Force Base in Illinois. A year later, she interviewed for her current position of Aide de Camp for General Van Ovost, a one-year position, and was then promoted to Lieutenant Colonel. “I have a different rank, but I am doing the same job.”

To honor the occasion of her recent promotion, a ceremony took place on January 19 at Scott AFB. Major General Kotulich spoke of Hinterman’s entire career and the importance of each step she has taken. “I pat myself on the back for hiring Caitlin,” Kotulich stated. “She helped make me more productive and made my work that much more enjoyable. Her family has been part of her career from the very beginning, but I’m not sure they know what a top tier officer Caitlin is.” 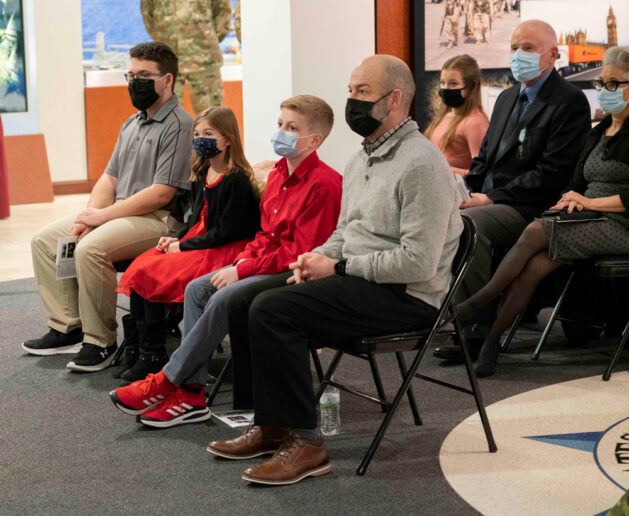 Next year, life will come full circle for Hinterman. She has been selected to be Professor of Military Science at Western Michigan University and will return to her home state in 2022. “Finally, I’m coming back to Michigan!” she exclaims. “I left Michigan, just me, packing everything I owned into a white SUV. I’ve collected some things along the way – I’m returning with three kids, a husband and two dogs.”

What does the future hold for the Lieutenant Colonel? The next step is Battalion Command. “I will apply to the Command Board and hope for the best,” she says. “I don’t set goals that are too far ahead of myself. My goal all along has been to do the best job, whatever it is.” 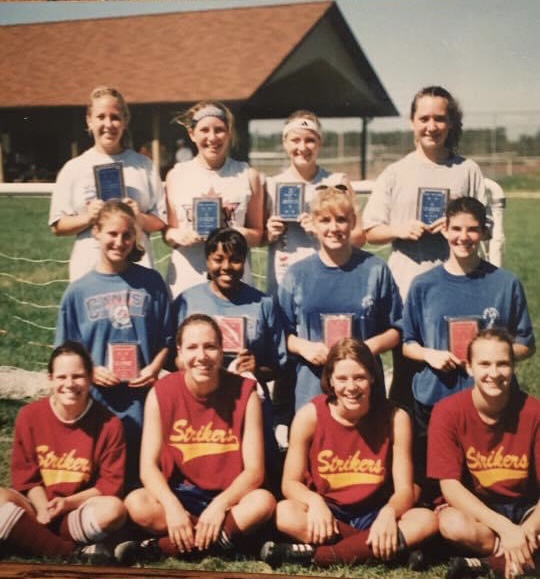 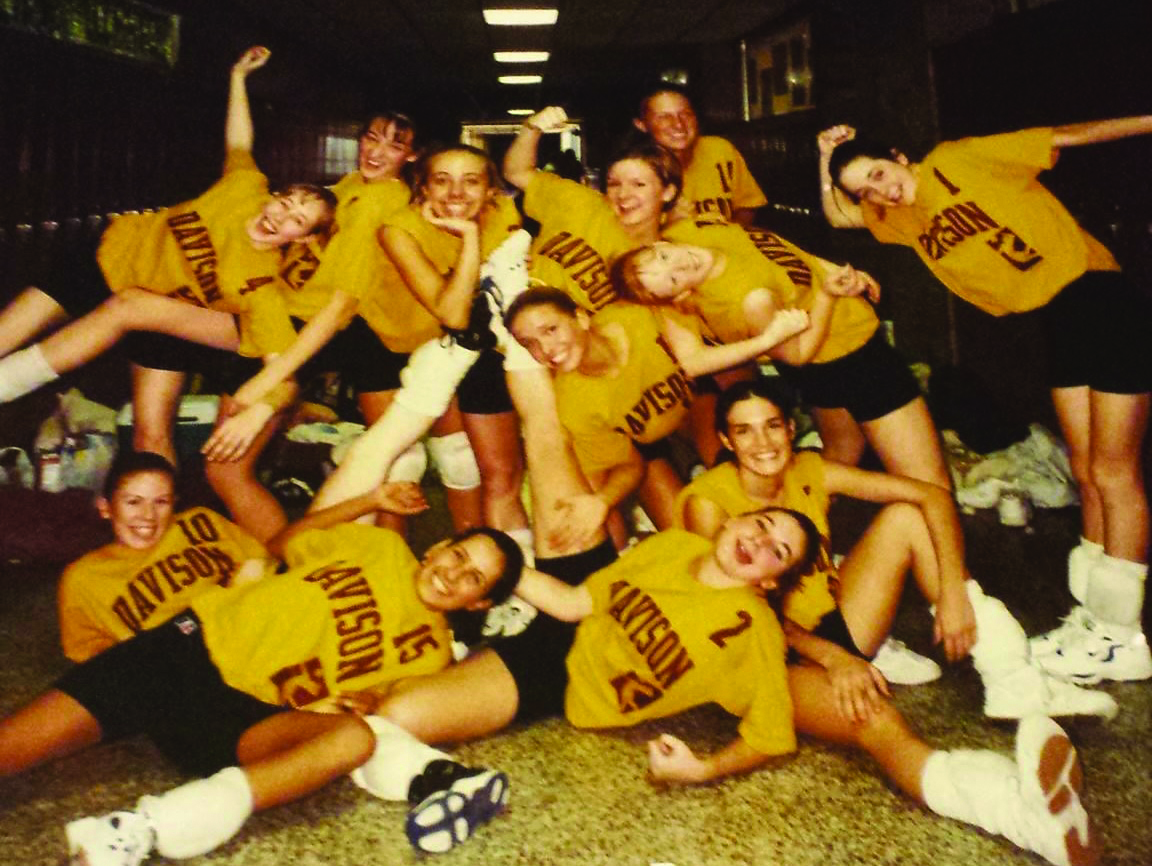 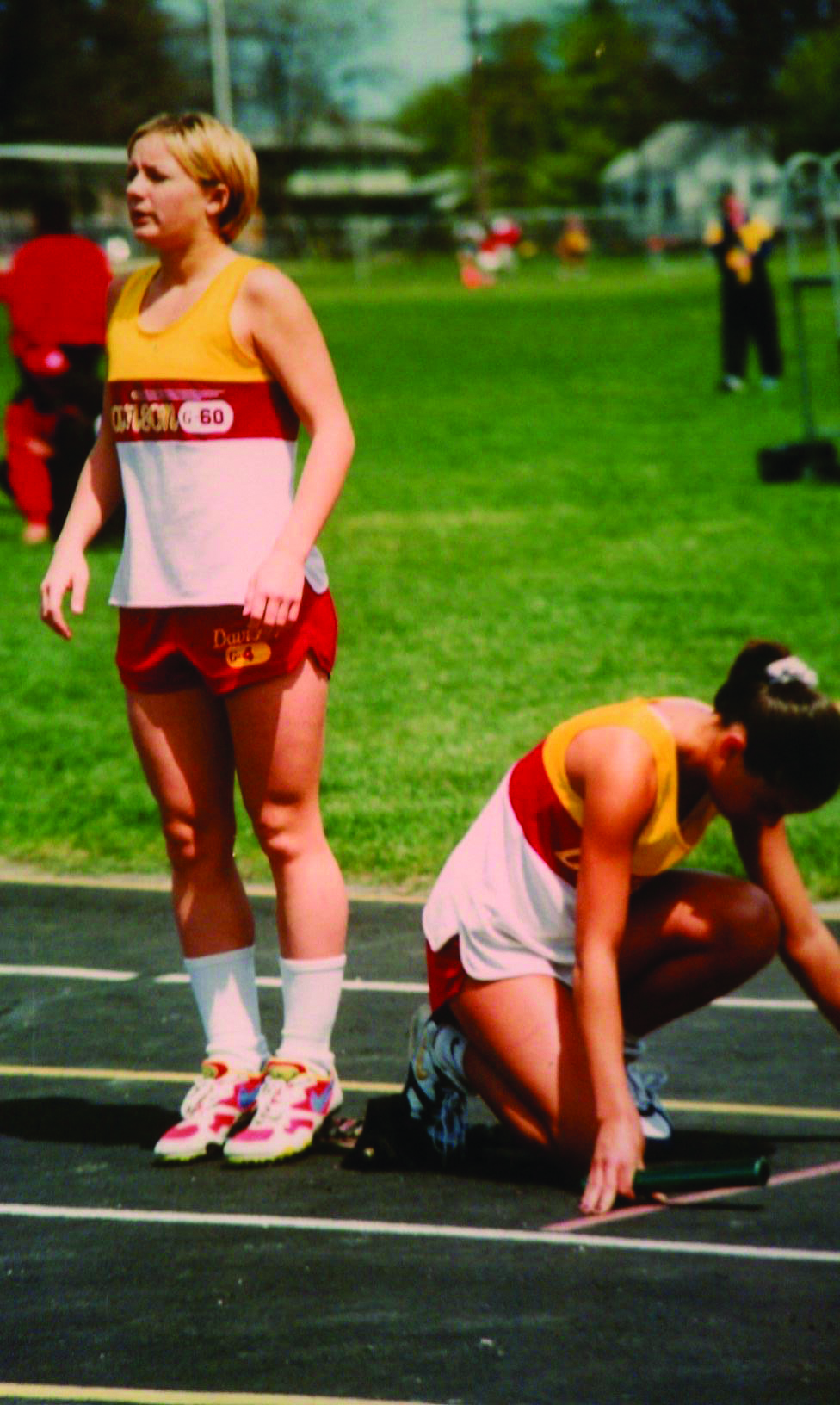 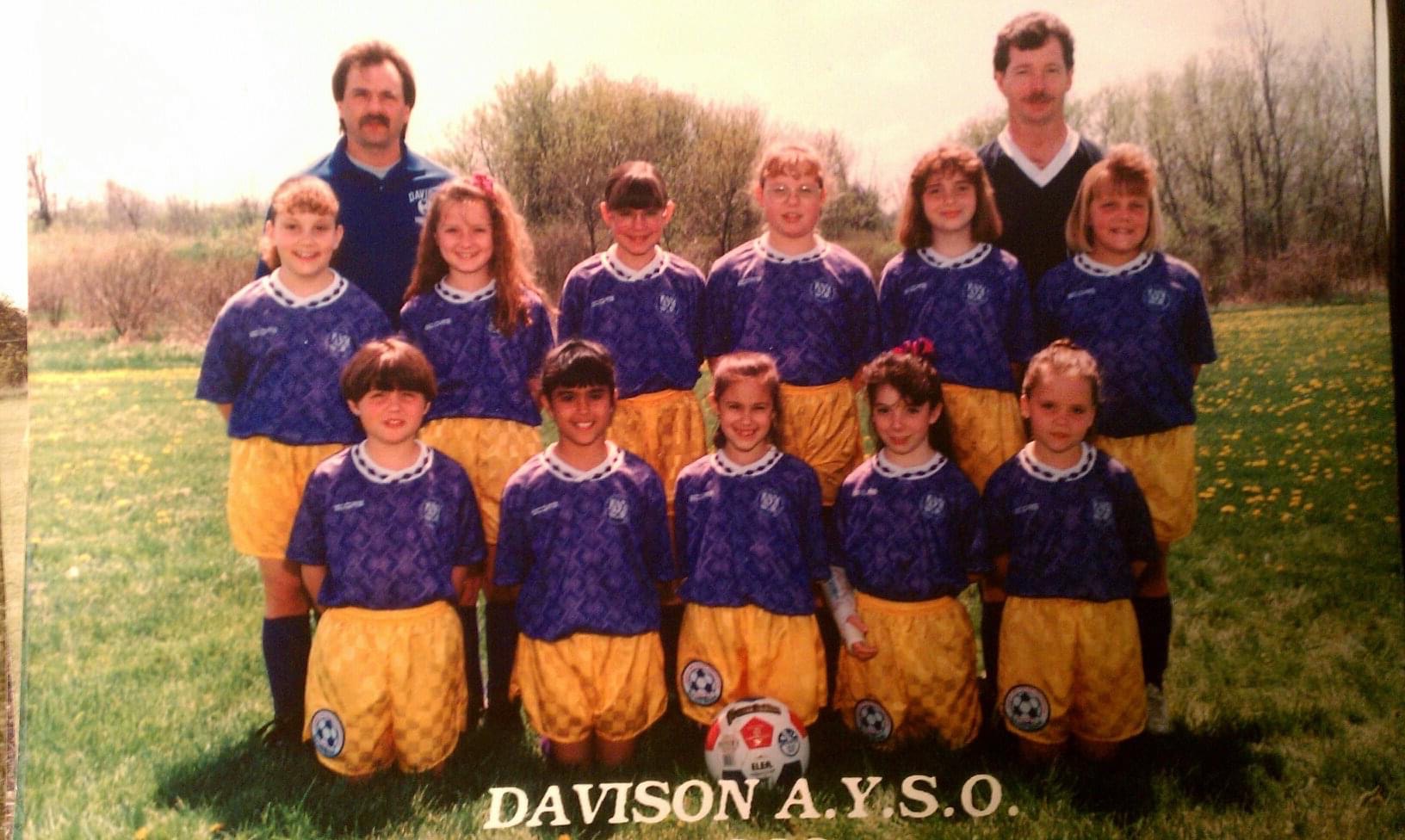 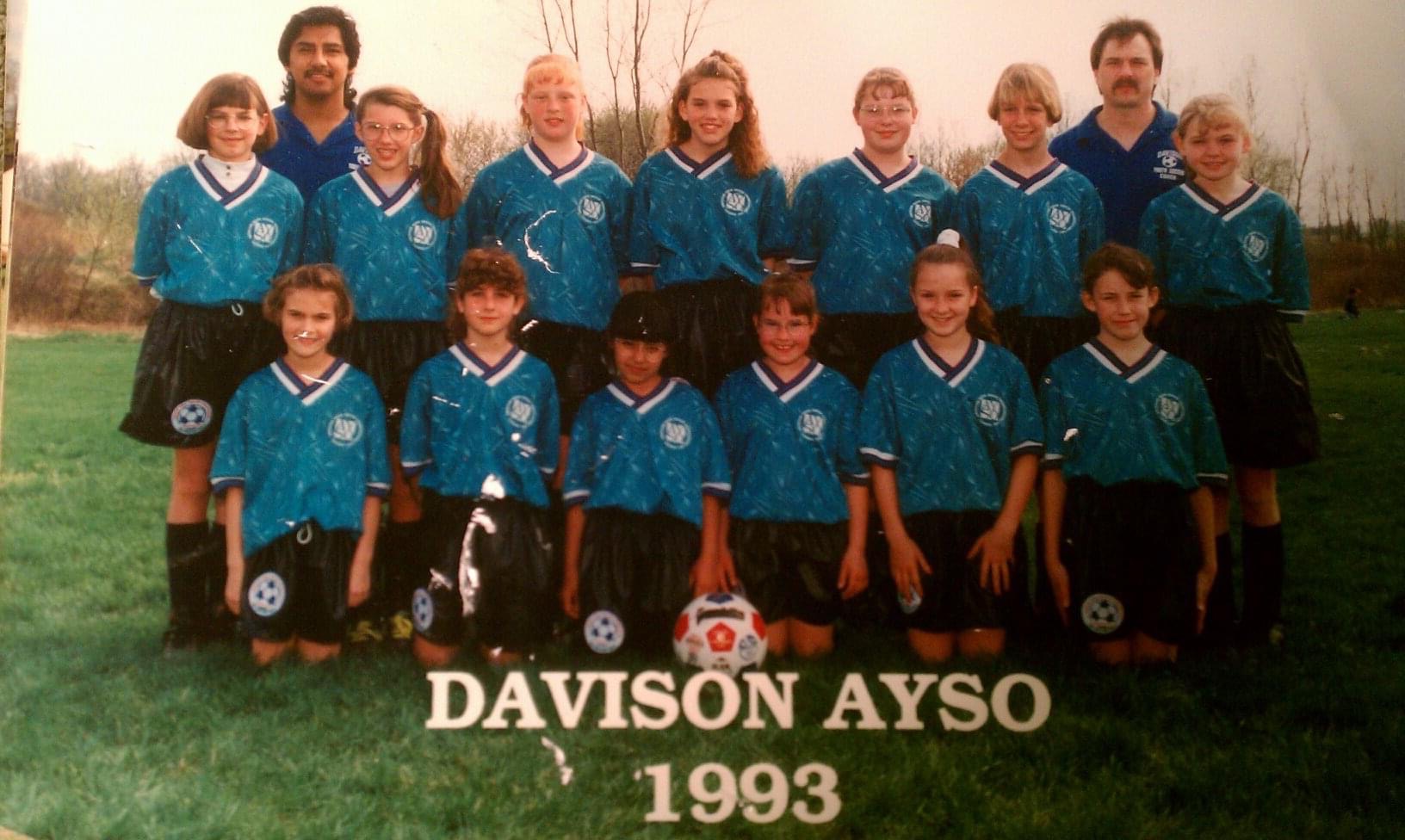 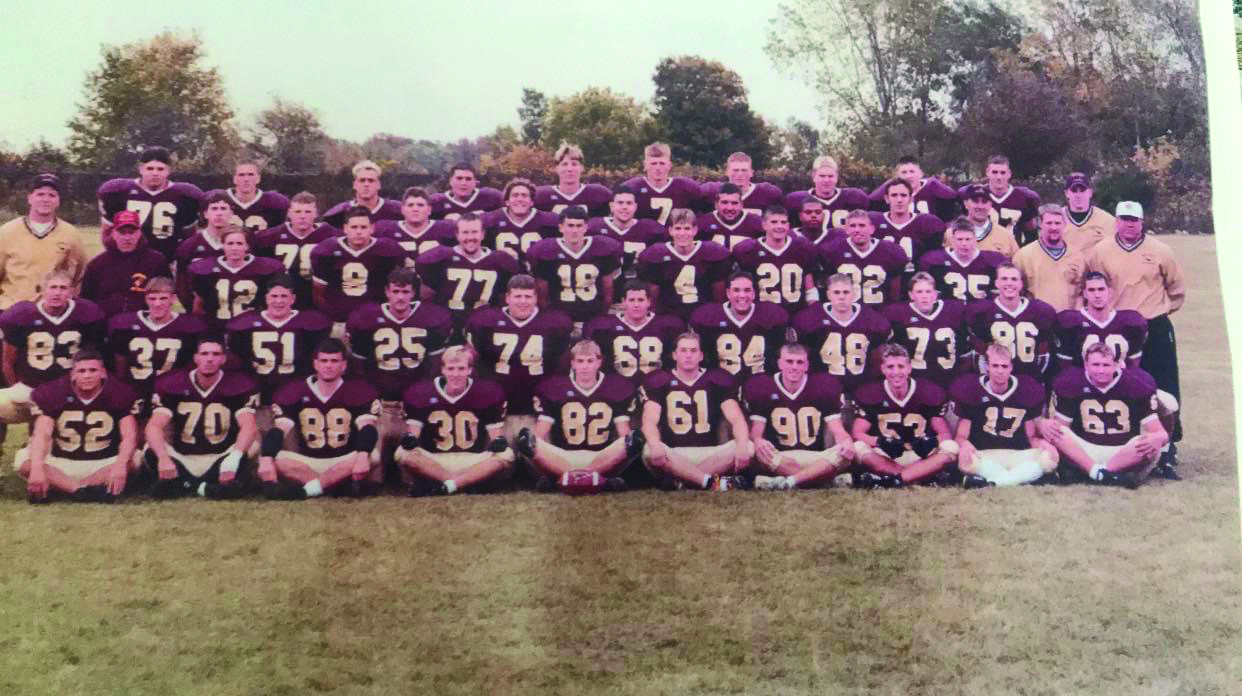 Hinterman feels that each job she has performed has been important to her journey. “I’m thankful for every position that has led me to the one I’m in right now,” she says. She enjoys her job and travels around the country with General Van Ovost at least once a month.

It takes a lot of ambition to get to where Hinterman is today. “It all started for me right here in Genesee County,” she says. As an athlete, she started playing AYSO soccer in Davison and was in a Brownie troop at Holy Rosary. She then went on to play varsity soccer at Davison High School where she was a 1st Team All-State selection, 2nd Team All-State selection in track and State Honorable Mention in volleyball. She also joined the Davison varsity football team as kicker for the 1999-2000 season. While stationed in Georgia, she played running back for the Atlanta Xplosion women’s football team. “My drive comes from participating in those programs – I’ve been playing soccer since age five. All of those different experiences gave me my drive.” And Hinterman says she couldn’t have picked a better career. “Every job I’ve done has been a challenge and I love the constant change of environment. Eighteen-year-old Caitlin made a really good choice. It has been perfect for me.”