Cody and Shannon DeLorenzo have no idea how it all started. “We both knew what we wanted to do and, honestly, I don’t think either one of us remembers when we took the first step,” says Cody. “We both knew we wanted to be foster parents.” After they married in 2018, they got ready to begin the process. “Shannon was working as a foster care licensing manager, so we kind of knew what to expect. We started getting our house set up immediately,” recalls DeLorenzo. They reached out to a friend in Clio who put them in touch with a local organization as the first step in achieving their foster care license. “We were interviewed, had to provide income statements, and undergo a home visit that included measuring our rooms and everything,” he adds. “The process can take three to six months.”

During that time, the couple had to complete pre-licensure training in which they learned about traumas and triggers and how to adjust to a bevy of kids’ personalities and challenges. Each potential foster household gets to set parameters as to what child they would want to live in their home. “At first, we told the agency that we were open for anyone,” DeLorenzo remembers, “but since we were a young couple, it was recommended that we narrow the field a little, especially when it came to physical disabilities. The agency wanted us to be successful and we listened to them. We limited it to age 17 or younger and with no extreme physical impairment.” It is not uncommon for foster placement to happen immediately after the parents receive their license and for the DeLorenzo family, things moved quickly. Today, Cody and Shannon are the parents of two adopted boys: Lamar (age 9) and Jayden (age 15). 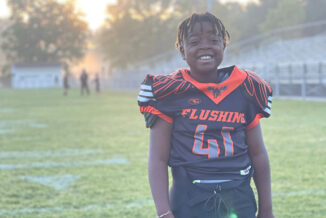 “Lamar came to us when he was five years old,” states DeLorenzo. “It was just after Christmas, so we celebrated it with him in January. He loved it – he loves getting presents, that’s for sure!” Things went smoothly but after a time, Lamar began to be triggered more frequently as he struggled with his past and his emotions. “There is always a ‘honeymoon period’ when things are great but after a while, reality sets in,” says DeLorenzo. “You never know what is going to happen until you are knee-deep in it. We were ready for it and learned through training how to deal with what can happen.” Lamar began to lash out, especially at school. It got to the point where DeLorenzo had to move his work to a room in the school so Lamar could have a chance to visit him when he needed to settle down. “He was just a sad kid but all of a sudden, a switch flipped and, with the help of his teacher Mrs. Holland, he started to excel. Now he loves school and this year, he begged us to send him to summer school to be with his friends.” Lamar quickly became one of the family and the DeLorenzos decided to pursue adoption. It took four frustrating years after Lamar first came into their home to finalize the process. “Each kid has a different set of variables,” says DeLorenzo. “We never really doubted ourselves or the process, but we did worry about how we would handle it if Lamar were to leave us down the road. We felt that he was a part of our family.” 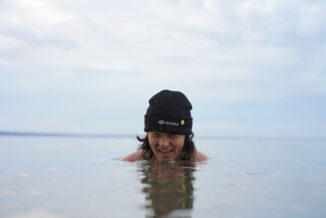 “We didn’t really have a plan for adopting or fostering another child after Lamar,” explains DeLorenzo. “We wanted to make sure he got all the focus he needed; but then, I met Jayden.” DeLorenzo was working at Whaley Children’s Center when he bonded with then-12-year-old Jayden. At the time, they both had long hair and when Jayden asked DeLorenzo to help him put his into a bun, they became friends. “It’s funny because I was 24 at the time and so, I was only 12 years older than Jayden. We are friends, but I am also his father and I have to play that card from time to time,” he laughs. Still, when Shannon and Cody got together and talked about maybe fostering and adopting Jayden, they had to consider what that would mean for Lamar. “We definitely prayed and thought about it but when we brought Jayden home, they got along great. Lamar really looks up to Jayden,” adds DeLorenzo. In order to adopt Jayden, Cody had to leave his job at Whaley Children’s Center and after 18 months, Jayden was officially part of the family.

“Don’t be scared. If you are thinking of adopting or fostering, do it. It’s the best thing in the world.”
Cody DeLorenzo 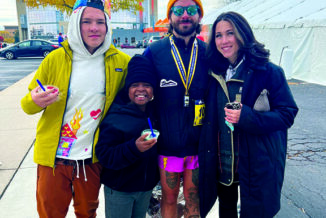 Today, Lamar and Jayden are thriving. “Before he lived with us, I’m not sure Jayden had ever passed a class in school and now he is on the honor roll,” states DeLorenzo proudly. “Shannon and I never thought we wouldn’t have biological kids but today, we are content with the family we have. When we started, our goal was not to adopt but to provide a safe home for the kids for as long as they needed it.” As it turns out, what the two kids needed was a family and the DeLorenzos couldn’t be happier. As a show of appreciation and to help other kids in foster care, they hope to raise $100,000 for Whaley Children’s Center through a 100-mile foot race challenge to take place in 2023. “I want to help kids in foster care and to show Jayden and Lamar that we can do the hard stuff to make something great happen.”

Jayden and Lamar are a success story that not many kids in foster care get to experience. Many will end up living a life of abuse, homelessness, mental health problems and sickness. One piece of advice DeLorenzo would like to give to a couple looking to become foster parents or to adopt is to not be afraid to adopt an older child. “The average age of adoption is below six years of age,” he informs. “Every year a child ages, the less chance they have of being adopted. For those who age out of foster care, only 4% go onto graduate college and only 18% even graduate high school. They truly do not need much beyond love and support. Our goal was, and still is, to keep it simple, be healthy and be as happy as possible. Don’t be scared. If you are thinking of adopting or fostering, do it. It’s the best thing in the world.” 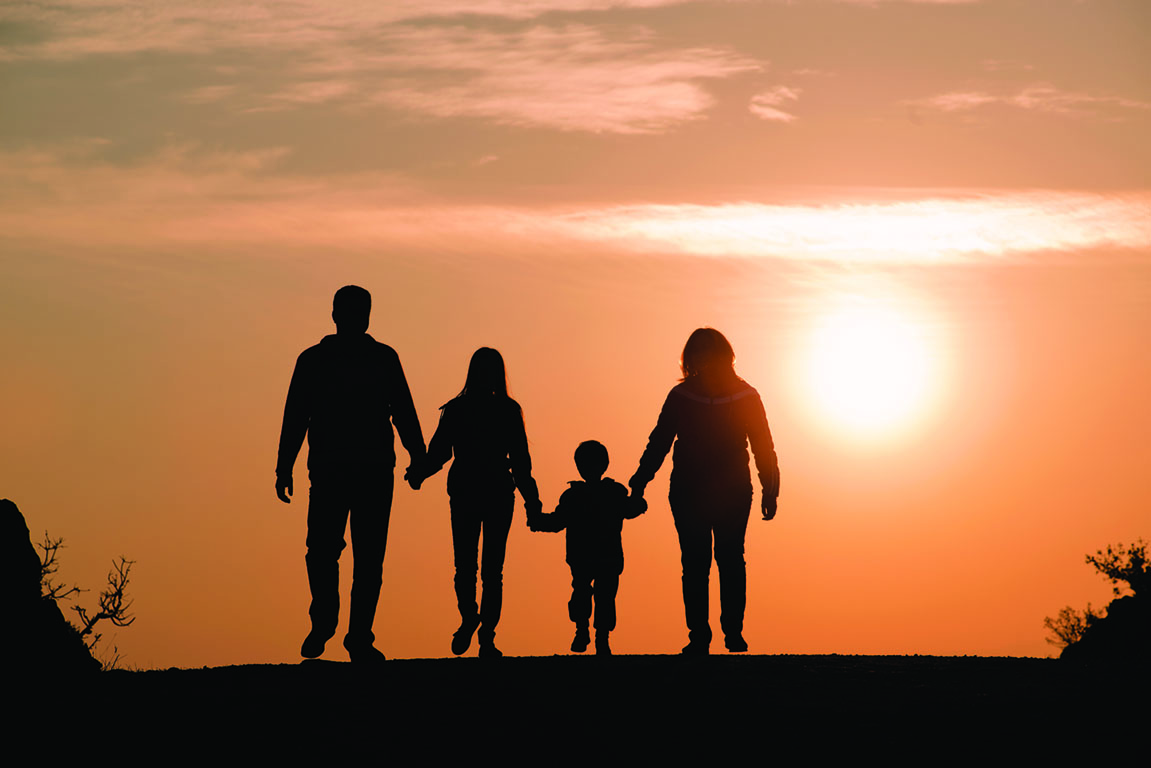 To Change a Child’s Life

The thought of becoming a foster parent or adopting a child can be intimidating. There is no real way to know what may come your way but by taking the first step, you truly could become the hero you have always dreamed of being and, more importantly, you could change a young person’s life for the better. So, where do you start?

“The first thing to do is contact the Michigan Department of Health & Human Services and inquire about foster parent training,” explains Mindy Williams, President & CEO of Whaley Children’s Center. “They can walk you through what you need to do and get you in touch with other organizations to start the licensing process for your home.” The next step is to attend an orientation and complete the license application. Potential foster parents must then complete 20-25 hours of training. “Every foster child has experienced their own level of trauma,” adds Williams. “The first trauma is the removal from their family and that reoccurs each time they are moved from one family to another. It’s common for kids to have been in 10-12 different places before they arrive at Whaley. Always remember that what they have experienced is never their fault. The behavior of some children is not going to be perfect. You have to learn to go with the flow and with learned coping skills, adjust to them and work with them.”

The next step toward licensure is to pass an on-site home evaluation. The agency you selected will meet with your family several times in your home for interviews. Once your license is activated, you may receive your first child placement in a matter of days.

Adoption can be the next step if desired, and comes with its own set of hurdles. “There will be a lot of red tape and hoops to jump through,” adds Williams, “and the rights of the biological parents must be surrendered or terminated, which can take a lot of time. Don’t give up!”

If you stick with the process, something great will happen for your family and for the child placed in your home. In the U.S., an estimated 437,000 children are in foster care with 69,000 living in group homes, and at any point in time, approximately 1.5 million children are waiting to be adopted. That’s 1.5 million kids without families, without support, without love and without hope. Fostering or adopting takes a lot of commitment but the result, as stated by Cody Delorenzo, can be the best thing in the world. “You are giving a child a second chance at hope,” says Williams. “To see kids open up to the idea that they can be liked and loved is one of the best things you will ever see. You never know – the first time a child will experience Christmas may be with you, in your home. They will remember what you have done for them and the traditions you hand down. You are changing a child’s life forever.”

To start your journey toward being a foster parent to a child in need, call 855-MICHKIDS, or visit michigan.gov/mdhhs/adult-child-serv/foster-care

“To see kids open up to the idea that they can be liked and loved is one of the best things you will ever see.”
Mindy Williams