As the crisp coolness of a mid-October afternoon settled over Bedford Valley Golf Club in Battle Creek, Kate Brody stood on a green dotted with colorful fallen leaves lining up what she hoped would be the final shot of an unforgettable high school career.

Dressed in layers, including a team hoodie and stocking cap to combat a chilly, autumn breeze, the Grand Blanc senior was a two-foot putt away from capturing a second Division 1 State Championship.

Brody had begun the day one shot off the lead following the first of two rounds before pulling in front. However, East Kentwood’s Elise Fennell, who carded the second round’s top score (70) was closing fast, hoping to at least force a playoff.

Times like these are when Brody’s greatest golf attributes take over.

From an early age, she has been unflappable, focused and composed on the golf course, no matter the situation. Against a backdrop of towering orange and green trees, Brody stepped forward and drained the putt to put the finishing touch on a 145 total for 36 holes and a one-stroke victory. 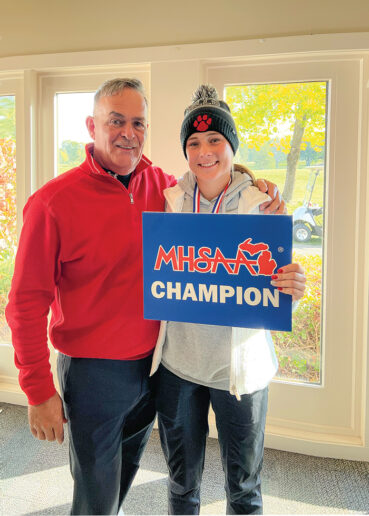 As cheering erupted from her supporters, Brody joined Powers Catholic’s Katie Strawser (Division 3 in 2003 and 2004) as the only Genesee County girls golfers with more than one state title.

“That weekend (October 14-15) at the state tournament was everything I had ever hoped for and the feeling after I won was indescribable,” says Brody, also a state titlist in 2020. “I felt so much joy, happiness and a feeling of accomplishment. It meant so much to have so many people there supporting me and sharing the moment.”

Sharing not only the moment with Brody, but also that “championship feeling’’ was her mother Jennifer, a three-time Upper Peninsula State Champion (1990-92) while playing for L’Anse High School, who later became an All-Big Ten performer at Michigan State, Michigan Open winner and LPGA Tour player.

“I feel like I accomplished everything I could have hoped for in my high school career. I had an amazing coach and an amazing team every year.”

“We were certainly confident Kate could win because of how she had played all season; but with golf, so much can happen on any given day,” Jennifer said. “Kate played well all weekend, but it came down to the wire. She held her composure and made shots.”

Along with steely nerves, unmatched consistency was crucial for Brody as she opened with a 73 and followed with a 72. The two first-round leaders followed 72s with 77s, and all other players finishing in the top five had at least a three-stroke difference between their rounds.

“Because of the weather and conditions, I knew that shooting pars was going to win it,” Brody says. “It was cold, windy and somewhat wet, so the course wasn’t playing super-easy. Staying calm, steady and consistent was the key because I was a little nervous on the last two holes. Playing the course three times before in non-high school events really helped, too.”

She started strongly and was three-under-par at one point in round one before a bogey and double-bogey stalled her momentum, but she remained in a good position.

After the opening round, Grand Blanc Coach Glen Bauer and Brody discussed strategy as they traveled to the course for round two. 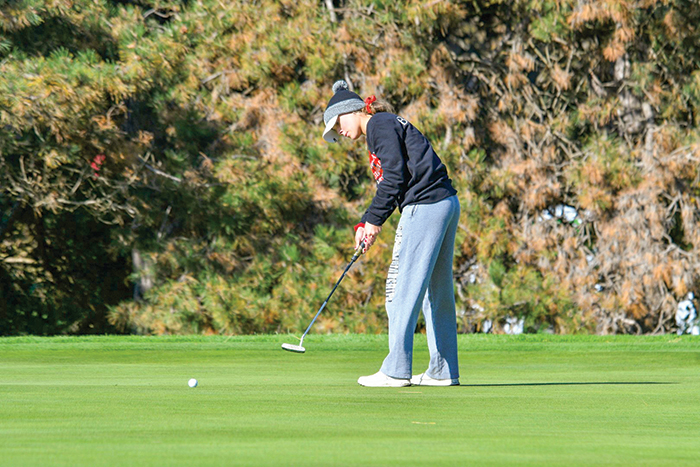 Brody’s high school achievements include finishing third in the state as a freshman (above) and fourth as a junior.

“We talked about using different clubs on some holes and not hitting the ball past holes on the greens which could make things tricky,” Bauer says. “Kate stuck to the game plan and was able to stay below the cup on almost every green. She put together two consistent rounds through a combination of good club selection, great course management, striking the ball well and making big putts. To see her cap off her high school career like that was pretty special.”

More excitement was in store for the Brody family the following day.

Barely 24 hours after Kate celebrated while holding a state championship sign, Jennifer was inducted into the Michigan Golf Hall of Fame during a ceremony in Big Rapids, clutching her Hall of Fame plaque.

“It was such a busy, emotional weekend,” says Jennifer, also a member of the Upper Peninsula Sports Hall of Fame. “Kate’s second championship was more emotional for me because it was her final high school competition. It was always so much fun to watch her, especially because of how she keeps her cool on the course. Kate does not get rattled, so I don’t become rattled watching her.” 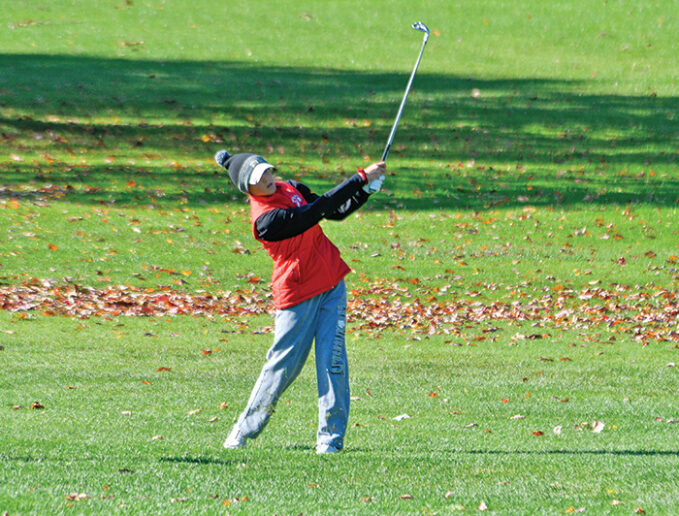 The final season of Brody’s high school career was her finest.

She began with a bang, setting school and course records by shooting an astonishing 10-under-par, bogey-free 62 at the Saginaw Valley League’s preseason tournament at The Fortress in Frankenmuth.

Ironically, the previous school record of 65 was set just last spring by Brody’s younger brother Tyler during his freshman season. He finished tied for 12th in the state and was one of only two freshmen named Division 1, First-team All-State.

This season, Brody won nine of ten tournaments and shot a pair of 65s, one of which won her a second regional championship. She also collected a fourth league title and third Genesee County championship.

“I had goals, but knew the key to having a good season was to have fun and not get ahead of myself,” says Brody, who will continue her golf career at the University of Wisconsin.

“Golf is what I spend most of my time doing but not the only thing that’s important to me, which keeps me grounded.”

Brody’s high school accomplishments also include finishing third in the state as a freshman and fourth as a junior. No other golfer in any division placed in the top four at state tournaments in each of the past four years. She is also a lock to become a rare, four-time member of the Michigan Interscholastic Golf Coaches Association Super Team, composed of the state’s top eight players regardless of division.

“Having already made a college decision really took pressure off Kate and she was free to just focus on golf this season,” Coach Bauer says. “She worked really hard during the summer and the 62 at Fortress was phenomenal because it seemed like every shot was easily going in. Confidence and success tends to fuel more confidence and success. Kate went after goals with a lot of determination and passion and I see no reason why she won’t be named Miss Golf.”

Brody will find out this month if she is the next Miss Golf, an honor that goes to the state’s top high school player.

“I feel like I accomplished everything I could have hoped for in my high school career,” she says. “I had an amazing coach (Glen Bauer) and an amazing team every year. I was able to form so many bonds through high school golf, as well.”

Brody points to her poise and passion for the game as main reasons for her success.

“On the course, I don’t let a lot of things faze me,” she says. “I know bad shots, bad swings and bad holes will happen, but recovering those has always been my strong suit. My mental game is very strong, but golf is also fun for me! It’s what I spend most of my time doing but it’s not the only thing that’s important to me, which keeps me grounded.”

Brody’s approach to the game has yielded plenty of success outside of high school as she continually seeks out the best competition available.

This summer, she tested herself in women’s events, tying for sixth at the GAM Women’s Championship and tying for 34th at the Michigan Women’s Open, the same tournament her mother won in 1996. Brody was tied for ninth after round one.

She also reached the Round of 16 at the Michigan Women’s Amateur and the semifinals of the Michigan Girls Junior Amateur.

Brody, who formally signed with Wisconsin this month, played the school’s home course – Blackhawk Country Club – for the first time in June.

Last year, Brody was ninth at the National Drive, Putt and Chip tournament at the famed Augusta National Golf Course, home of The Masters. She also took second at the GAM Junior Invitational and Junior State Amateur and third at the Michigan Junior PGA Championship, an event she won in 2020.

“Doug and I (swing coach), Jason Guss and others have helped Kate at different times,” Jennifer says. “She will come to us if she needs help with a certain part of her game, but Kate is very self-driven and motivated. She is determined to work through any issues on her own first and never has to be told she is not practicing enough.”

Given her parents’ pedigrees in the sport, growing up at Warwick Hills and first holding a club around age four, Brody seemed destined for golf greatness. Her father spent seven years as head pro at Walnut Hills Country Club in East Lansing before coming to Warwick in 2005 and is a past winner of the Pebble Beach National Pro-Am. 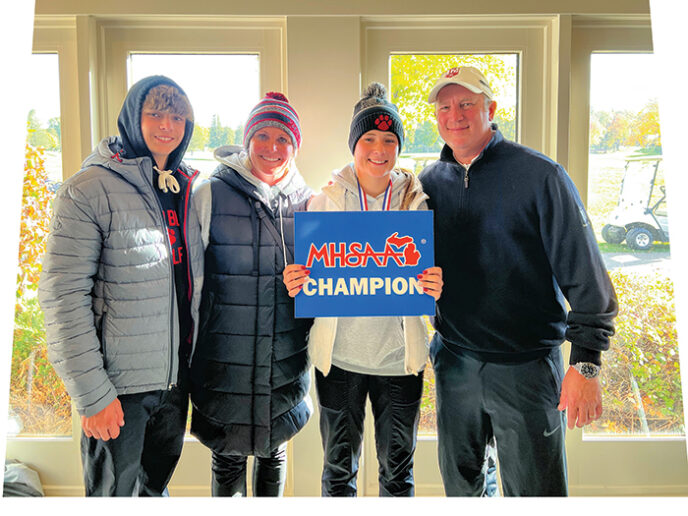 ALL IN THE FAMILY: Also accomplished golfers, Kate’s family has cheered her on through her stellar high school golf career. (L-R) Tyler, Jennifer, Kate and Doug Brody.

Brody was allowed to find her own way, however, and took part in soccer, basketball, volleyball, track and field and swimming at various times, in addition to golf, before entering high school. She began playing in Warwick Hills’ junior program prior to kindergarten and started entering events beyond the Flint area at age 11.

“Once middle school hit, I could tell I was best at golf as it began to be the sport I had the most fun playing,” she says. “I always wanted to be at the golf course and playing in tournaments.”

Brody’s game really took off in the year prior to the beginning of her high school career. During that time, she finished ninth in the Teen World Championships and won the GAM Junior Kickoff, GAM Girls Junior-Am Stroke Play and GAM 14-and-Under Match Play championship.

“There really wasn’t one big moment that signaled to me how good a player Kate was going to be,” Jennifer says. “Her steady progress over time was the biggest indicator and the poise she showed on the course from a young age was huge.”

Brody intends to continue that progress at Wisconsin, which will need to replace two of its top six scorers next season. Professional golf could follow college.

“When I visited Wisconsin, I fell in love with everything about the coaches, players, facilities and campus and could not be more excited about playing there,” says Brody, who regularly communicates with her future teammates. “If I still have a passion for the game after college, I would love to take after my mom and continue playing for a living.”