The story begins with the purchase of pizza and a salad, and then a bagel. Next thing you know, you have slowly stolen $11.2 million over the course of your career. Your ultimate goal: make your school district No. 1. Based on the true story that rocked the town of Roslyn, NY in 2004 and garnered attention nationwide, “Bad Education” starring Hugh Jackman and Allison Janney focuses on the impressive impact and aftermath of a multi-million-dollar embezzlement scheme uncovered by a high school newspaper. The movie is reminiscent of “Erin Brockovich,” in which one clue leads to another until the truth is revealed in a dark, comedic way. 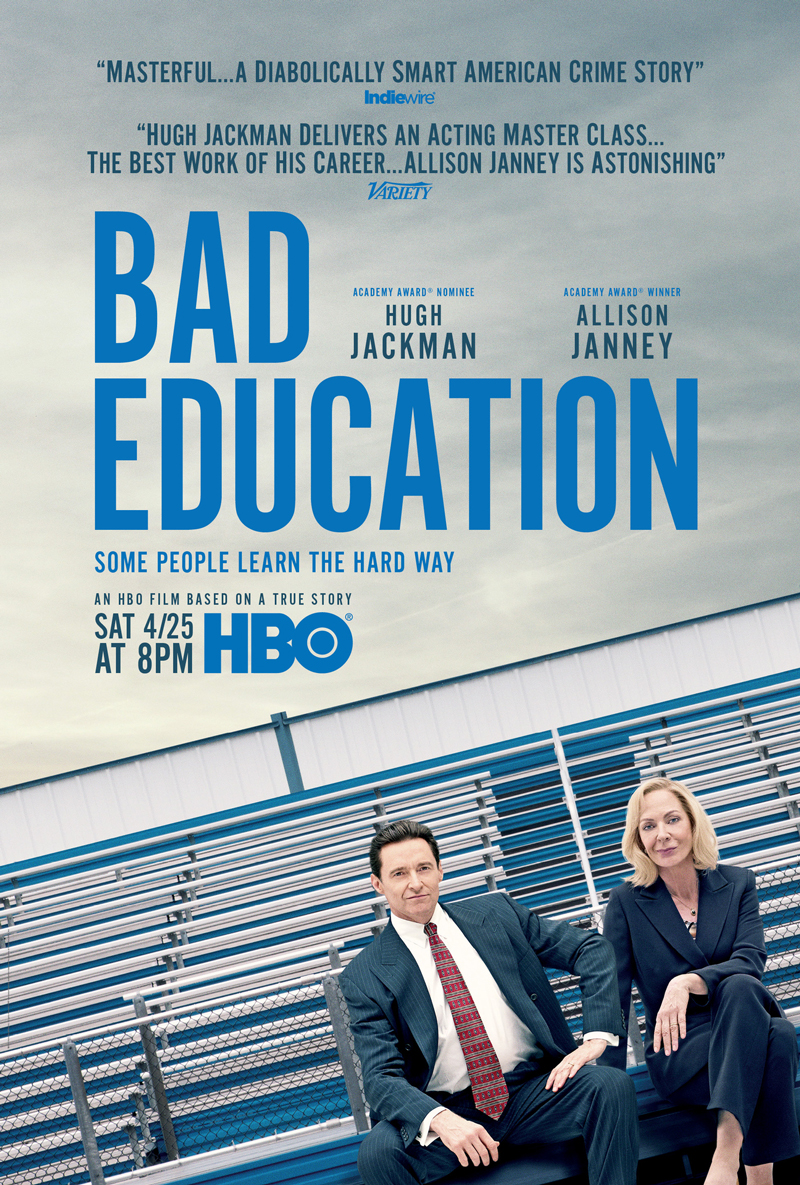 When choosing to watch “Bad Education,” I was unaware that the film was based on a true story. I thought it was going to be a typical high school comedy with a focus on the administration staff rather than the kids. (Movie pitch, anyone?) But once it started, I was pleasantly surprised.

Giving off a “Ferris Bueller” feeling at the beginning, Jackman plays Frank Tassone, the successful, charismatic superintendent of the Roslyn School District. To everyone around him, Tassone was a competent and sophisticated man who helped the school district rise above its neighbors. He was the kind of person who would eat with students and was involved in the local community via different activities, a local book club for example. Allison Janney plays the role of Pam Gluckin, business manager for the Roslyn School District, and Tassone’s co-pilot.

While covering the story of the construction of a new district skywalk, student newspaper reporter, Rachel Bhargava, finds evidence of corruption and helps uncover the truth about what is really going on in the Roslyn School District.

In the end, Tassone and Gluckin’s secrets had unfortunate consequences for the district. Some examples include: $37,385 in dry cleaning bills; $3,471 for cable TV; $5,236 for Dr. Tassone’s Christmas cards and overtime pay for a clerk to prepare them; 965 personal FedEx deliveries; $20,686 for rugs and furniture; a $4,890 brunch; $45,700 for jewelry; $7,550 for tailoring and an unspecified $4,500 bill at the Mandalay Bay Casino Resort in Las Vegas. The Roslyn School District also bought Sony PlayStations and telephones in Colorado and Pennsylvania.

After watching the film, I was flabbergasted by what the embezzlers accomplished for so long with no one noticing. But it makes sense how the two people at the top could make it happen. I give “Bad Education” three out of five Acorns.

Next up is something similar to this story with McMillion$!