Upon first look, Antwerp, Belgium is as charming as the postcards found in souvenir shops throughout its twisting passages and nonsensical medieval streets. The sounds of the Flemish-Dutch language echo in the bars over pints of more than a hundred kinds of Belgian beer. The facades of the tall, thin, Amsterdam-style canal houses are stately and magnificent, and when experienced for the first time … you almost believe this is a little slice of Amsterdam.

And, it is charming – a beautiful, thriving city where the souls of hundreds of years of lives, wars, heartbreaks and beautiful artistic vision have come together. Peter-Paul Rubens called it home, the cathedrals and churches are breathtaking visions of grandeur, but … there is something off. It’s like going to Atlantic City after a trip to Vegas. It’s like Michigan Adventure after a day at Cedar Point. It’s great, and it’s exciting, and you’re having a wonderful time … but, Cedar Point is really freaking cool and Michigan’s Adventure is … not Cedar Point. That’s how a visit to Antwerp feels. It’s a place where sad tourists go when the cooler European cities are full. 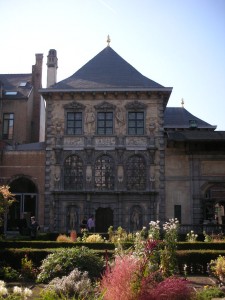 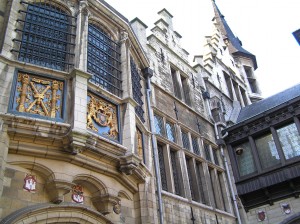 A few days into my trip to this city, I’m walking down a street when I realize (not for the first time) that it runs parallel to nothing and is in fact taking me farther away from my destination. Medieval streets are romantic and all, but they don’t make any sense. As I curse out loud at my geographic disorientation, the eerie feeling that I’ve experienced this entire trip once before tugs at me again. For, during the day, there are no people in the city. Bikes seemingly without owners are parked outside shops that seem to have no one inside, except for a few locals who are confused as to why I am in their city. The streets are empty, with only the faint sound of a distant bike bell or the metro underneath. I look about me, and I miss the cheerful tourists of Amsterdam and the myriad languages one hears in Paris. I miss the sound of a camera flash in Rome and even the bump of ear-splitting music one would hear at any intersection in America. It is a lonely kind of place, but I console myself with chocolates from any number of Belgian candy shops, and then perhaps a stop (or three) to the street-side waffle vendors, who quite happily give you a chunk of sugar-pressed waffle the size of a baby’s head for a few euro.

And then, when the sun sets, people appear as if from thin air. They sprout up on chairs in the beer gardens and emerge at cafés fully-formed holding books, casting disapproving looks at American tourists. My feet are tired from trekking a city that was seemingly abandoned during the day and is now crawling with people like bats under a bridge. As I sit at my table and flip through the ghostly empty photos I took that day, I sigh, and looking around the café begin to feel a kinship with the people of this city. They live here. This is their home, and it is lovely like nowhere I’ve seen in the states. This city may not be London, Barcelona or Amsterdam. It may not be the Cedar Point of cool, but hey, even a vacation to Michigan’s Adventure is better than hanging out in your own backyard. So, Antwerp or Paris, Istanbul or Dublin, the experience is always worth the trip!