Clutching a flag and sporting a Detroit Red Wings jersey, 13-year-old Jon Merrill was awestruck as he waited in the tunnel at Detroit’s Joe Louis Arena prior to a 2005 playoff game. The Holy Family seventh-grader had been chosen as a flag bearer for the contest and was moments away from skating a lap around the ice in front of a typically raucous postseason crowd.

When the time finally arrived, Merrill bolted from the tunnel, savoring every aspect of the experience while skating around the same ice surface as his hockey heroes. “I remember from an early age wanting to play for the Red Wings and the flag bearer experience only made me want that more,” says Merrill, who lived in Grand Blanc from age four through the eighth grade. “I vowed that if I ever got the opportunity to make my dream of wearing the Red Wings jersey as a player come true, I would jump at it. No hesitation.”

Suiting up for the Red Wings was hardly Merrill’s only dream, however. He began to see others come true in the years that followed. In fact, the very next year, a 14-year-old Merrill became one of the youngest players ever to commit to the University of Michigan’s hockey program. In three years with the Wolverines, he helped them to the 2011 national championship game while earning all-conference honors. Merrill spent college off seasons representing Team USA in international competition, winning back-to-back World Under-18 Championship gold medals before taking bronze at the World Junior Championships. 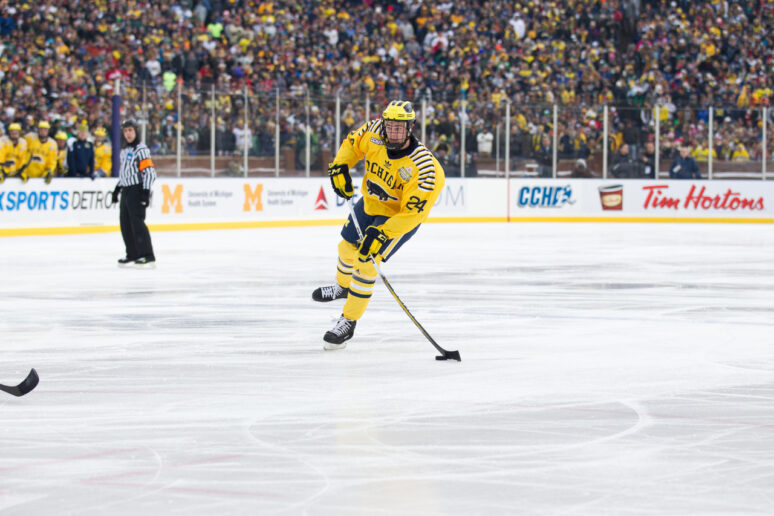 “I had thought about and dreamed about this moment for so long that I really could not sign fast enough.”

Merrill was selected by the New Jersey Devils in the 2010 NHL Draft and played in his first NHL game on Nov. 3, 2013. After four seasons with the Devils, he joined the newly-formed Vegas Golden Knights and played in a Stanley Cup final.

After the Golden Knights’ 2020 playoff run ended in the Western Conference finals, Merrill left the NHL’s Edmonton playoff bubble in September, pondering his future. The 28-year-old defenseman was less-than-satisfied with the season. Merrill appeared in only 49 of 71 regular-season games, contributing two goals and five assists, and played in just a single playoff game. He decided to become a free agent and see if other teams were interested in his services. 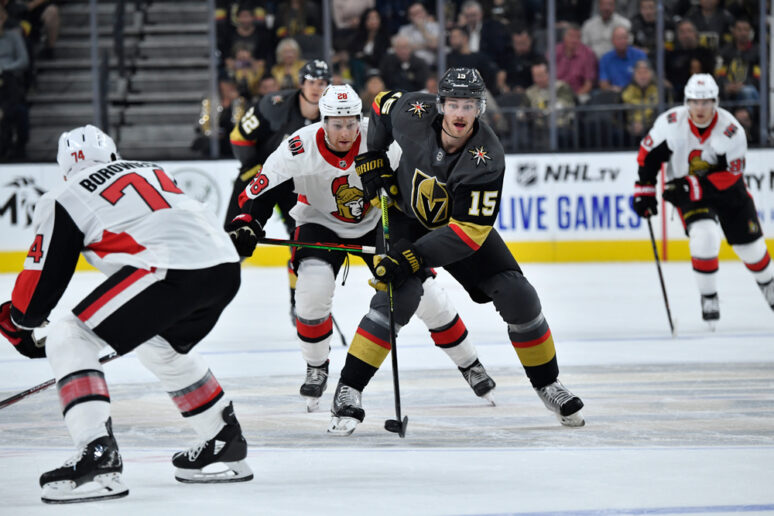 He anxiously awoke on the morning of October 9, the first day teams could sign free agents, and waited to hear from his agent. He soon called with the news Merrill had longed to hear since before kindergarten – the Red Wings wanted to sign him. “I really didn’t know what to expect that day, but I wanted to go where I could earn more playing time because I feel confident in my game and in what I can contribute,” Merrill says. “I was looking for an organization that wanted and believed in me and for the Red Wings to be the first team to contact me, wow! Excited is not the right word.”

Perhaps most exciting for Merrill was that Hockey Hall of Famer and Red Wings General Manager, Steve Yzerman, one of his childhood idols, called to make him an offer. “It was surreal to hear his voice and I tried not to lose my composure because I have been a such huge fan of Steve,” he recalls. “Then, to hear him talk about why the Wings were interested in me was amazing.”

Yzerman also spoke publicly about Merrill. “Jon provides, on our left side, a real safety net with Danny DeKeyser coming off back surgery,” he said last October. “If we have to move one of these guys to the right side, it gives us more depth. I expect him to play a lot. He’s a big guy and I expect him to be solid on our penalty kill and help improve our defense.” 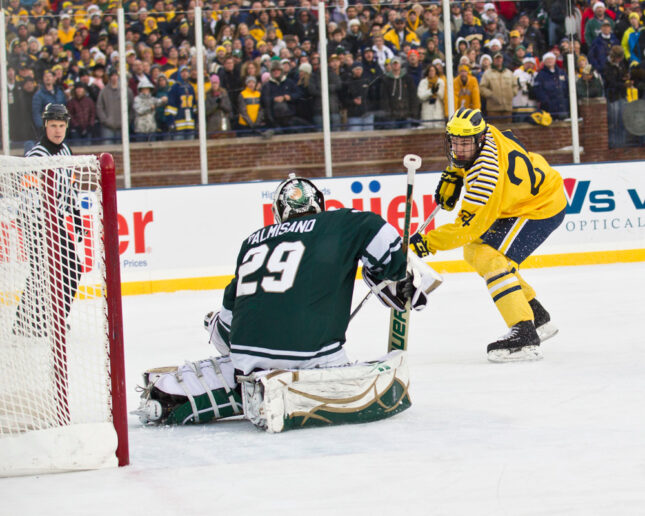 The easiest decision of Merrill’s life was signing a one-year, $950,000 deal with Detroit. “I had thought about and dreamed about that moment for so long that I really could not sign fast enough,” he says. “My wife was equally excited and this is what’s best for our family. My parents and all the family we have in Michigan were elated.”

Calls, texts and messages began flooding Merrill’s phone and the family’s social media accounts. “I heard from so many people. Guys I played with ten years ago said they were happy to see me return home,” he says. “It was really touching, actually.”

One of the first to contact Merrill was Detroit forward Luke Glendening, his former Wolverines teammate. “I have been fortunate to be good friends with Luke and have him show me around and introduce me to the guys,” he says. “That has gone very well and they are a great group of teammates. He also introduced me to the coaching staff and front office people. They have been very welcoming.” 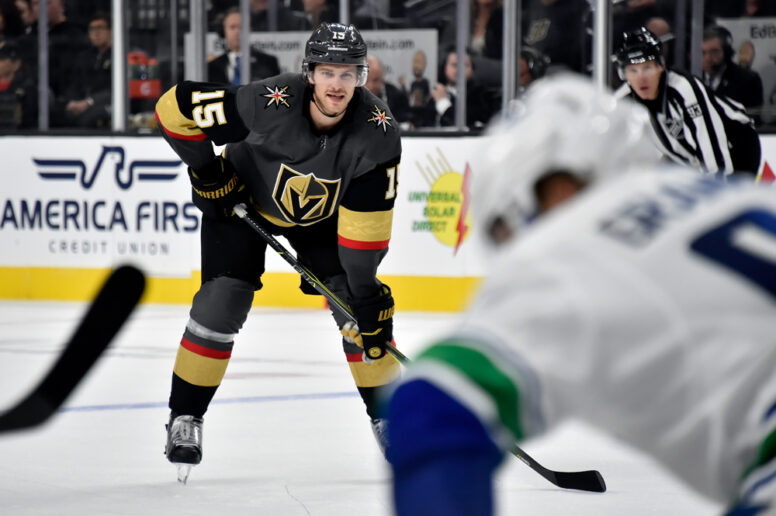 Merrill was born in Oklahoma City where his father was stationed in the Air Force. Four years later, his parents moved the family to their hometown of Grand Blanc when the elder Merrill’s Air Force enlistment ended. Soon after the move, Merrill’s father enrolled his sons, then ages four and six, in a learn to skate program at Flint Iceland Arenas. That led to Jon discovering a passion for hockey that continued to grow ever stronger.

He first played for the Flint Icelanders before joining Detroit-based Little Caesars AAA Hockey Club. “I loved growing up in Grand Blanc because there was so much family there which meant everything to me,” Merrill recalls. “We spent tons of time riding bikes through the neighborhood where everybody knew each other. In winter, I played on a hockey team, but also loved playing outdoors on ponds with friends. Heck yeah, it was fun.” Merrill attended Holy Family from kindergarten through eighth grade before the family moved to Brighton as his hockey career continued to flourish.

During his final two years of high, school Merrill played for the U.S. National Team Development Program team, then based in Ann Arbor. That led to his selection in the second round of the 2010 Draft shortly after graduating. 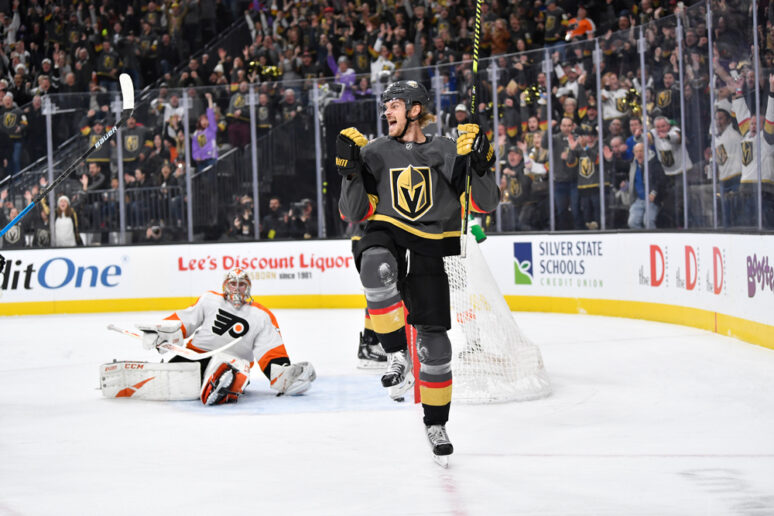 At Michigan, Merrill finished with 47 career points (11 goals, 36 assists) and was a plus-25, making the CCHA All-Rookie Team and All-CCHA Second Team as a freshman. He then signed with the Devils and spent two seasons with their AHL affiliate in Albany, NY before being called up to the NHL at the beginning of the 2013-14 season. Overall, Merrill has played in 356 NHL games with 12 goals, including four game-winning goals, and 49 assists while being a steady defensive presence.

Now, Merrill is eager to help the Red Wings move on from last season’s league-worst 17-49-5 record. “Obviously, I want to make a positive impact and bring what I have learned to help the team improve,” he says. “The goal is always to get better individually and do whatever I can for the team. Nobody outside of the organization expects much from us this season, so let’s prove them wrong.”