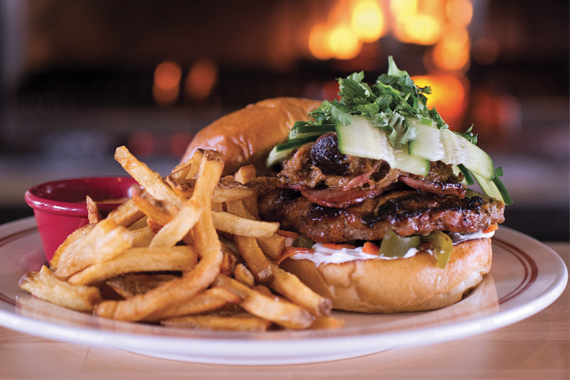 Oh, be still my heart! A luscious, marbled rib eye steak cooked over an open fire pit; bubbling hot, creamy mac & cheese; pulled pork shoulder slow cooked over green hickory; Bratwurst simmered in Fire Hall Ale and served with house-made kraut. These are just a few of the delectable and mouthwatering dishes on the menu at the new Fenton Fire Hall restaurant. “The Fenton Fire Hall restaurant can be summed up in one word: AMAZING!” says the review of a satisfied customer of the eatery, which opened in Downtown Fenton in December. My City Magazine met up with two of the owners, Erich Lines and Curt Catallo, to talk about their latest endeavor to turn Fenton’s old fire station into a one-of-a-kind restaurant. Curt and Erich, along with Curt’s wife, Ann Stevenson, own several restaurants, many of which are located in historic buildings, and they’re extremely delighted to add Fenton to their long list of locations.

While renovating the fire hall, the owners took the utmost care in maintaining its integrity, as the building is near and dear to the hearts of many Fenton residents. “The building is so interesting!” exclaimed Curt. “It’s captivating.” Built in 1938, the structure sits smack in the middle of Downtown Fenton on LeRoy Street, with a view of the Shiawassee River and Dibbleville, Fenton’s oldest and most historic area. “The building was constructed with so much integrity,” says Curt of the trio’s latest renovation site. “It was maintained with such pride. For our kind of repurposing, it was the perfect canvas.” The new owners felt it was important to integrate the history of Fenton’s firefighters into the restaurant and to honor the role those civil servants played in the community. Thus, portraits of firefighters proudly hang on the walls of the lower level. “The portraits are so powerful!” exclaimed Curt. “The service they have given to this community is so significant.”

The restaurant occupies each of the building’s three floors. “Each level has its own vibe,” explains Curt. The lower level’s long, wooden bar serves as a lounge area where, as the evening progresses, area hipsters gather to hang out with friends for drinks and good food. The bar was salvaged from an old cocktail lounge in Chicago, and is flanked by portholes provided by Rob Perani from his father’s collection. Ann, who is from Minnesota and incorporates the flavor of that region into her design projects, built the lounge with materials salvaged from a room in St. Paul, MN.

There are 48 beers on tap at the bar, two of which are from the Fenton Winery & Brewery, bringing a local feel to the restaurant. Of course, Kid Rock’s American Badass Beer (a huge favorite) is always on tap. “It’s a great throwback bar,” smiles Erich. “It’s the kind of place where your uncle might be drinking a boilermaker or a Schlitz while your aunt enjoys a Manhattan.” 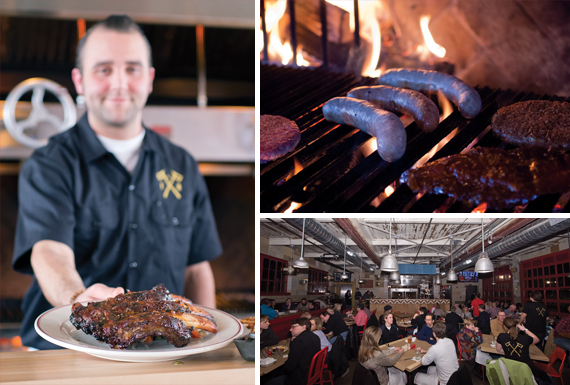 The eatery’s second level is where the owners get serious about the food: “it’s all about the kitchen,” laughs Curt. The focal point is the wood fire grill, where delectable meats are cooked on an all oak-fueled fire constantly stoked by highly trained pit masters. “It’s an art, and they are proud of their craft,” says Curt of the chefs. Pork shank, beef ribs, burgers, shrimp and steaks are grilled to perfection over the fire pit, much to the delight of hungry diners. “A rib eye steak soaked in green hickory and then cooked over an oak fire gives you a flavor that is both primitive and complex,” says Curt. The most popular item is called “Lord of the Pit,” which feeds two hungry people or, to quote the menu, “one person with poor judgment.” The meal consists of pulled pork shoulder, chili-rubbed flank steak, half a chicken and two house-made sausage links.

Every restaurant owned by Curt, Erich and Ann is renowned for their mac & cheese, which was the brainchild of Ann, who remembered how the dish warmed the hearts and souls of her fellow Minnesotans. “We wouldn’t be here without mac & cheese,” laughs Curt. “It’s hot, satisfying comfort food, and people love that.” With accolades like this, we are of course not talking about your everyday mac & cheese from a box. “We’re talking honest food served in the most honest way,” he says. Each of the trio’s restaurants offers its own versions of mac & cheese that can only be found at that particular restaurant. At the Fenton Fire Hall, the four options include a Vermont sharp cheddar and mild Pinconning cheese layered with penne rigate and a crunchy crust top; the Franco Mac: House Chorizo, smoked shrimp and grilled sweet corn; Thanksgiving Mac, with turkey, tart Michigan cherries, celery and sage; and Chef Mac: Pit chicken breast, wilted baby kale, sundried tomatoes and fresh basil. Wow! If that doesn’t make your mouth water, nothing will!

Curt, Ann and Erich are thrilled to be caretakers of the building they believe belongs to the residents of Fenton. “We are just the keepers of it,” says Curt. “It meant a lot to us to share this building. Ann has such a fine eye for detail; she even made wallpaper using replicas of pages from the old fire hall log books. The help she got from the fire department was beyond our expectations,” says Curt, “and we didn’t want to let them down.”

Finally, there’s the roof. This summer, roof-top dining will be enjoyed on the restaurant’s third level. It will be enclosed and convertible, not to mention that it will provide guests with the best view of Downtown Fenton ever experienced.

In addition to the unique food and atmosphere, this venture has also provided jobs for 93 people, 85 percent of whom are local. The chefs who prepare the phenomenal fare are Aaron Cozadd and Chef de Cuisine John Wentworth, a Fenton resident who enjoys walking to work. The opening has been wildly successful, thanks to the community-minded philosophy behind the renovation and mission. “We want everyone to feel at home here,” says Curt. “It’s a kitchen and tap room, and we serve food until everyone is fed.”

See more photos HERE, or purchase photos from this story by going HERE and selecting the “Fenton Fire Hall” category.