As advanced as Hurley Medical Center is, the simplest thing its staff achieves is a high level of patient care. Doctors, nurses, and administrators all seem to have one thing in common – an internalized habit of caring for others.

Hurley’s mission statement is “Clinical excellence. Service to people.” And like James J. Hurley himself, Dr. Richard Warmbold has followed this five-word mission to the letter for 25 years. Warmbold, who officially retired on January 2, was President of the Hurley Foundation.

“I am most proud of developing a professional team that has the commitment and energy, the skills and talent to work together to make a difference.”
Dr. Richard Warmbold 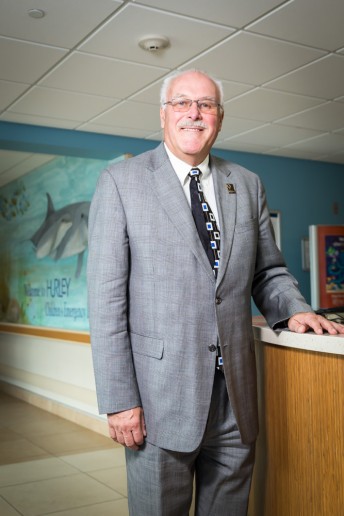 Born in Detroit, Warmbold grew up in Paw Paw, MI. He graduated from Alma College with a Bachelor of Science, and with a Master’s of Arts and a PhD from Michigan State University. He first accepted a job at General Motors Institute (GMI) as the Head Resident Advisor to help open their brand new residence hall. He was there for 18 years, seeing it through the transition from GMI to the private college it is known as today: Kettering University.

Eventually, he began a consulting business and started working with Hurley Medical Center. When he came in, Warmbold told the board and CEO that it would take three to five years to start a foundation to meet their objectives at that time.

“Hurley is a special place,” Warmbold shares. “It’s a premiere public teaching hospital, but takes care of everybody who comes through their doors. They have the opportunity to make a difference in people’s lives, both children and adults. It can be very rewarding.”

“Everybody is treated the same at Hurley – they’re going to get excellent care” he says. “Unfortunately, the outcomes aren’t always optimal; but we hope that they know that they had the best treatment possible. Miracles do happen, but not always.”

For Warmbold, each work day was different – and as any Hurley employee who goes above and beyond what is asked of them, he was no exception. “I spent time with volunteers, staff/team members, with patients and their families before they went into surgery,” he shares. “I made presentations to individuals, business organizations, rotary clubs and Kiwanis clubs, and signed lots of thank-you letters.”

In addition to the everyday administrative aspects, Warmbold and the rest of the Foundation have always believed and practiced putting a friendly face on every human interaction. For example, if a loved one or a friend is being treated at Hurley, they encourage people to call in; members of the Hurley Foundation will stop by and leave a business card to give them a face and a name in case they ever want to reach out. “We just like to be that friendly face,” he explains.

“If I was ever having a bad day, I’d go for a walk through a couple of the units where people were really having some challenges,” he shares. “It made my challenges disappear when compared to theirs. Especially the kids.”

Despite the fact that it wasn’t always the best-case scenario, his favorite part was getting to know the families and see the babies – sometimes weighing less than two pounds at birth – grow up after leaving Hurley’s NICU, or seeing an adult go through something traumatic and have a fulfilling life after their care at Hurley.

“Looking back, there were so many great things – watching families grow together and seeing some of those kids who I considered to be our kids, they hugged me and talked to me. Being out in the community, I heard stories of nurses who went above and beyond to make a family or patient comfortable. They will tell their stories … and hearing it from someone who has experienced it, rather than an employee, was motivating. You never know what the connection is, but there’s always something that was done here at Hurley.” 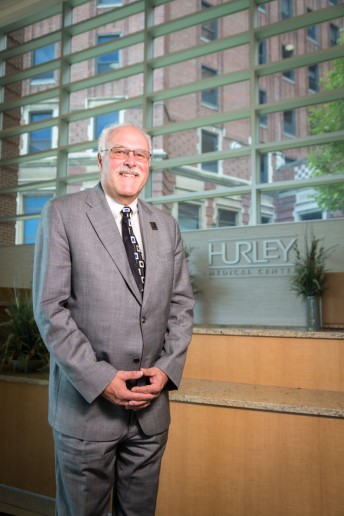 Warmbold has attended all the Hurley fundraising events, such as the annual ball, which benefits a different program each year. “It’s always fun to see people dressed up and having a good time,” he says. “You get to see Hurley staff members who are typically in scrubs wearing tuxedos or fancy dresses.” In the summer, he attends the annual golf outing, which benefits their trauma services, dressed up in knickers like Jackie Gleason and thanking each attendee. Other events include Pink Night Palooza, which benefits the Breast Navigator Fund, and Children’s Miracle Network picnics and bowling nights for the “Miracle” children. “Each one is different, and they’re always a pleasure to attend, even if I am working,” he shares.

Along with their dedicated staff/team members, Hurley’s volunteer base is also quite impressive. Most of the nearly 600 volunteers are adults; but uniquely, they include high school and college students. Overall, Warmbold is also impressed with over 2,500 employees.

“I am most proud of developing a professional team that has the commitment and energy, the skills and talent to work together to make a difference,” he says. “And seeing team members’ eyes light up when they talk about their work. Teamwork makes a difference: I hope that’s my legacy. The team not only lives up to James J. Hurley’s initial vision – they internalize it. They continue to expand services to meet the needs of the communities they serve. That’s the only reason why they’re here.”

“Flint is changing,” Warmbold says of education, healthcare, and entrepreneurship in the area. “I think it’s going to rebuild itself. My hope is that gets back on its feet. Flint has a lot of attributes and settings that other communities don’t have.” And his hope for healthcare is similar. “I hope that there is access to healthcare to meet all needs,” he says. “It’s not going to be easy. Access will be a challenge, but it should be at the level of quality that everyone deserves.”

Devoting his time to Hurley since August of 1991, Warmbold’s plans for retirement are simple: move to an old house in Boyne City, MI with his wife, Corinne, and spend the winters in Ft. Lauderdale, FL. He will downhill ski in the winter and boat in the summer; he and Corinne will garden, bicycle, and use their camper trailer to visit their ten grandchildren who are scattered all around the country. In essence, they have many ideas and many plans; but while he’s on the road, he’ll fondly remember the people who make Hurley what it is.