Dr. Marty Kaufman, Professor of Geography, Planning and Environment at UM-Flint, and student Paul Mattern were worried. The planet was heating up, temperatures were pushing above normal and people were getting sick. “People don’t realize it, but excessive heat kills nearly 1,300 people per year in the United States,” explains Kaufman. “In fact, most heat-related deaths are attributed to other diseases and sickness that can be caused by excessive heat.” Those who are the most vulnerable to heat are children and the elderly with personal isolation and certain environmental factors (lack of tree cover, asphalt, standing water, etc.) contributing to the problem. With the goal of saving lives, Kaufman and Mattern searched for a way to create an excessive heat-warning system at the ground level. “We wanted to build a ground network to provide real-time heat readings,” the professor explains, “without relying on a satellite system that may not be telling the whole story.” Mattern, who works as manager of planning and scheduling at MTA, had an idea. “He came up with a plan to install heat sensors at MTA bus stops around Flint,” says Kaufman. “They worked perfectly. The bus signs were the right height and their locations made sense.”

People don’t realize it, but extreme heat kills about 1,300 people in the United States each year.
Dr. Marty Kaufman

The two turned to electrical engineer Dan Kurin to design and help build the sensors. “Each sensor is solar-powered and each circuit board had to be assembled by hand as funding was kept to a minimum,” adds Kaufman. “We had a shoe-string budget.” Last but not least, the project fell to Troy Rosencrants at UM-Flint’s Office of Economic Development. He developed the online dashboard of sensor locations, as well as mapping support. Forty operational sensors were distributed throughout the city and remain active.

The sensors record both the heat and humidity of an area to create a heat index otherwise known as apparent temperature. The value is recorded and sent via cell signal every half hour to an operating website. The website is accessible to the public and shows the temperature of different sensor locations in the city in real time. Kaufman and his team have also devised a colorful warning system with green meaning “no caution” up to red – a location exceeding 120-degrees Fahrenheit. “We have already hit a few areas in Flint with temperatures exceeding 130 this summer,” says Kaufman. “We had a few days with 90-degree temperatures and 90% humidity. The combination of the two is what is most dangerous.” 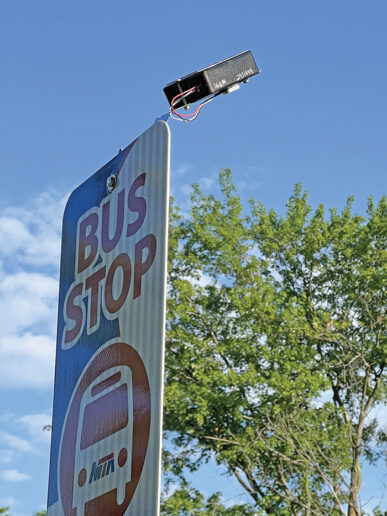 In October, the team will pull and analyze the data. “The plan is to define the heat islands (hottest areas) in the city as well as the current heating trend,” says Kaufman. Characteristics of the area will be noted to see what contributes to or lowers the heat. The data should prove important for city planners and public entities. If an area is found to be a heat island, planners and government officials can step in with ways to mitigate the heat such as building proper drainage, adding adequate vegetation and tree cover, or adding cooling stations where the vulnerable can escape the heat. “A big problem that no one realizes is lack of a cool-down period,” says Kaufman. “If there is a hot day followed by a hot night without a cool-down, it adds up.” Kaufman and his team are also looking into partnering with local hospitals to study the trend of sickness coming from the city’s hotter areas. “We expect there to be a correlation between heat islands and illness,” states Kaufman.

Mattern came up with a plan to install heat sensors at MTA bus stops around Flint. “They worked perfectly. The bus signs were the right height and their placement made sense.”

After the data is analyzed and recorded, the next step for the team is to publish their findings and then expand the study. “Hopefully, after we publish, we can receive funding to scale it upward,” says Kaufman. “We would like to distribute sensors in places like Detroit or Atlanta to see what is happening in larger cities and different areas. We would also like to move from a cellular signal to a WiFi signal which is much more reliable.” 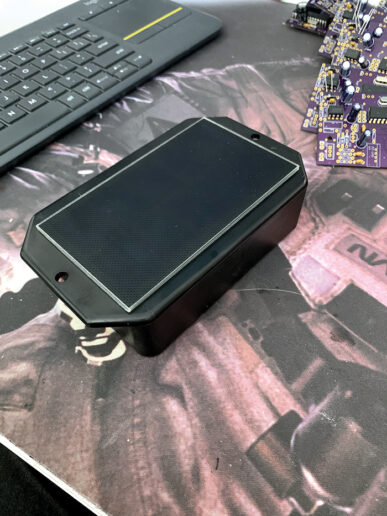 As the world continues to heat up, studies like the one Kaufman and his team are conducting will become very important. Identifying the problem areas can help to mitigate future effects of heat on the population. Flint, through studies like this, is attempting to get ahead of the curve. “Flint is the initial study and we have gotten great cooperation from the people in the city,” says Kaufman.

If you want to check the city’s temperature on the ground in real time and take a look at what Kaufman’s team is up to, visit:
https://bit.ly/3eKlroP.