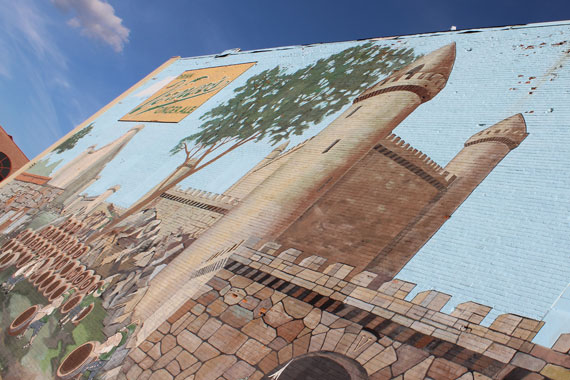 In 1932, General Signs workers John Gonsowski and Keith Martin painted a three-story mural to advertise Vernor’s Ginger Ale on the building across from the Vernor’s Sandwich Shop, which is now the Halo Burger in Downtown Flint. Gonsowski, born in Poland, showed his European sensitivities in his artwork, depicting smiling gnomes working out of a castle, stacking oak barrels which say “flavor mellowed 4 years in wood” on the mural. Gonsowski also painted other Vernor’s advertising signs throughout the Flint area.

In 1979, the building displaying the mural was scheduled to be demolished. In response to community outcry to save the artwork, the Greater Flint Arts Council held a town hall meeting to measure community support and to discuss possible solutions. More than 80 people attended the meeting and it was unanimously decided that the best way to save the Vernor’s Mural would be to purchase the building and make it the permanent home of GFAC. This accomplished, the Council’s Urban Walls Committee had the mural restored using Gonsowski as a consultant.