A nonprofit health and human service organization, the United Way of Genesee County is celebrating its 100th anniversary this year.

According to CEO Jamie Gaskin, volunteers govern the United Way organization, their annual campaign, and how donations are shared with community partners. In conjunction with other organizations throughout the community, they work to develop effective solutions to community issues, reaching people from all walks of life and all income groups. “We use teaspoon philanthropy,” Gaskin explains. “We have 1,000 various local employees who take dollars from their paychecks to help others and support 200 different programs.”

Gaskin, who has been the CEO of the organization for nine years, says there are a number of families in Genesee County who can’t meet their basic needs. “And it’s not just in the city of Flint,” he reports. “It affects the entire county.” Statistics show that families from all over – Clio, Davison – are struggling, and in Fenton 40 percent of the families are struggling to meet basic needs. “First, it was the pandemic and now people can’t keep up with the rate of inflation.”

United Way works with core community partners that include the United Auto Workers and General Motors. “People who make a wage want to help others,” he notes. “It’s about people helping other people. Thousands of people giving a tiny bit can collectively help others.” 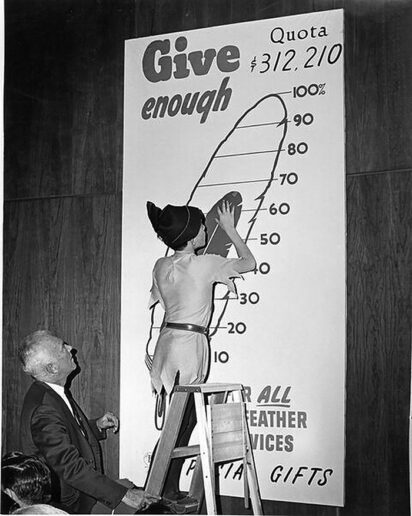 In 1949, the Red Feather Organization was started to “act as an umbrella over the Community Chest and the United Health and Welfare Fund in Genesee County.

The UWGC has been celebrating United Way’s 100 years of service. They partnered with the Flint Institute of Music (FIM) and The Capitol Theatre for an October performance by the Isley Brothers. “It was a way for our community to celebrate with music,” Gaskin says. Net proceeds benefited both  United Way and FIM community programming. In addition, residents of Genesee and Shiawassee Counties can enjoy United Way Free Weekends at both the Sloan Museum of Discovery and Longway Planetarium.

Leading UWGC is a volunteer board of directors committed to ensuring that the organization’s financial and personnel resources are invested in ways that make the greatest positive impact on the lives of people in Genesee and Shiawassee Counties. The Board is composed of 20 local community leaders from diverse backgrounds who meet quarterly, with various engagement activities held in between. 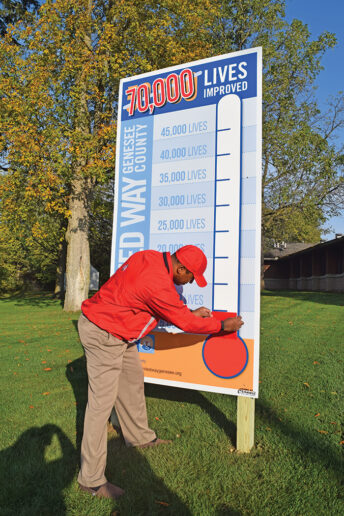 United Way uses a “thermometer” sign to encourage donations from the community.

In 1949, the Red Feather Organization was started to “act as an umbrella over the Community Chest and the United Health and Welfare Fund in Genesee County.” At the time, the organization included 48 agencies.

From 1952 through 1960, 11 community funds in Genesee County joined the Red Feather family and in 1964, Lapeer County, with six community chests, joined the organization.

A new name for the Red Feather transformed the organization into the United Fund of Genesee and Lapeer Counties in 1970.  At that time, United Way was still a closed system that raised and distributed funds for a set group of agencies. 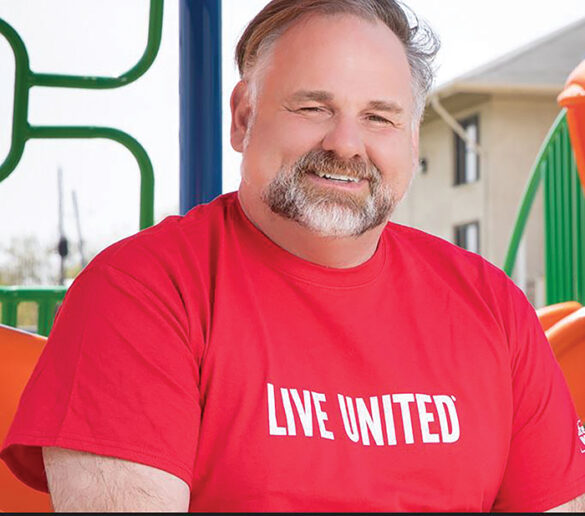 As community needs grew, it became increasingly apparent that the United Way could not be the sole support for a select few agencies; no longer could United Way raise money on the “give once for all” philosophy. The shift was reflected in the new name that the organization adopted in 1975, when it became the United Way of Genesee and Lapeer Counties.

Today, United Way of Genesee County works in partnership with funders, human service agencies, educational institutions, health care providers and other groups to provide vital services for children and families. The independent community agency is governed by its own local volunteer Board of Trustees.  “We judge our success not by the dollars raised, but by the number of people we have helped”, Gaskin concludes.

calls were made to UWGC’s 211 resource and referral line.