Frank’s Tavern, which was located in Fenton near the shores of Lake Ponemah, was a fish-n-chips institution for more than 80 years.

When it closed its doors in 2010, longtime patrons were heartbroken. But former owner Rachel Medore (who owned Frank’s from 2005-2010 and worked there for many years) and her husband Shayne, have brought the famous eatery back to life – at a new location and with a modern twist.

Frank’s Hoppy Bistro, occupying the southeast corner of Thompson Road and US 23 in Fenton Township, opened in October 2021. The former Canadian Steak & Fish restaurant closed in January 2021 and according to Shayne, they started negotiations for the building last May and closed the deal in June 2021.

Shayne and Rachel met shortly after the doors of Frank’s Tavern had closed. They both decided to go back to school where he received a degree in computers and she in respiratory therapy. They began working at jobs in their chosen fields until COVID hit. Both were laid off from their jobs, giving the couple plenty of time to work on their ideas for the “new Frank’s.” The building was completely remodeled, both the dining area and the kitchen. Shayne built the beautiful bar, which is now the centerpiece of the restaurant. “I had a vision in my head and just started building,” he shares. “It all came together!” 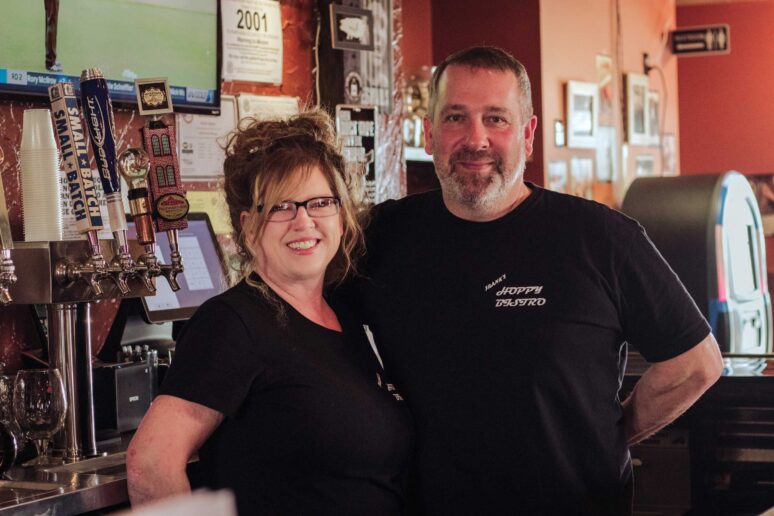 “Bringing back an institution like Frank’s exceeded our wildest expectations!”

Shayne, who has a background in brewing beer, says he wanted to incorporate “good beer” along with the great seafood on the menu. And a lot of the seafood meals are made from the original Frank’s Tavern recipes. Rachel makes many of Frank’s favorites from scratch, including the famous fish sauce, cocktail sauce and tartar sauce. Now on the unique menu are six different artisan pizzas; the scratch-made dough is hand-stretched to order and Rachel makes the pizza sauce fresh daily.

“We tie our pizza in with the seafood,” she explains. Their signature pizza is Shrimp Pesto. Another favorite is the Mushroom Medley with truffle oil, a special blend of mushrooms, artichokes, roasted red peppers and custom seasonings. The variety also includes Greek, Pepperoni with Fresh Basil, Cheeseburger, and Buffalo Chicken. “These are not cookie-cutter pizzas,” says Shayne. “It took months to perfect the crust. It’s a labor of love.” One of the cooks came up with the idea for the cheeseburger pizza, and it has become very popular.

Rachel makes Frank’s original vinegar-based crunchy, sweet and tangy coleslaw. “It’s a big deal with our customers,” she reports. Frank’s Famous Fish Sauce is bottled and sold at the restaurant. 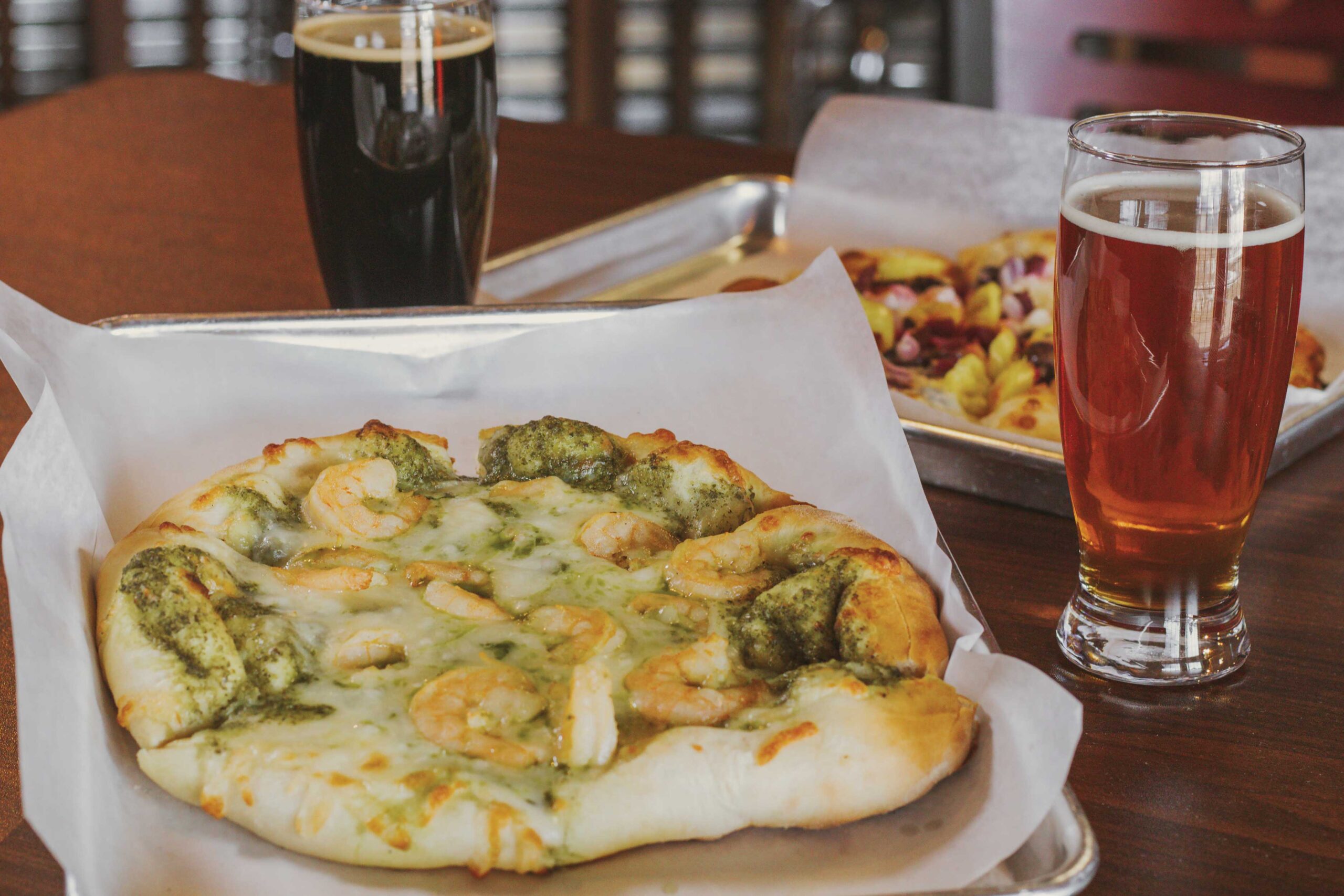 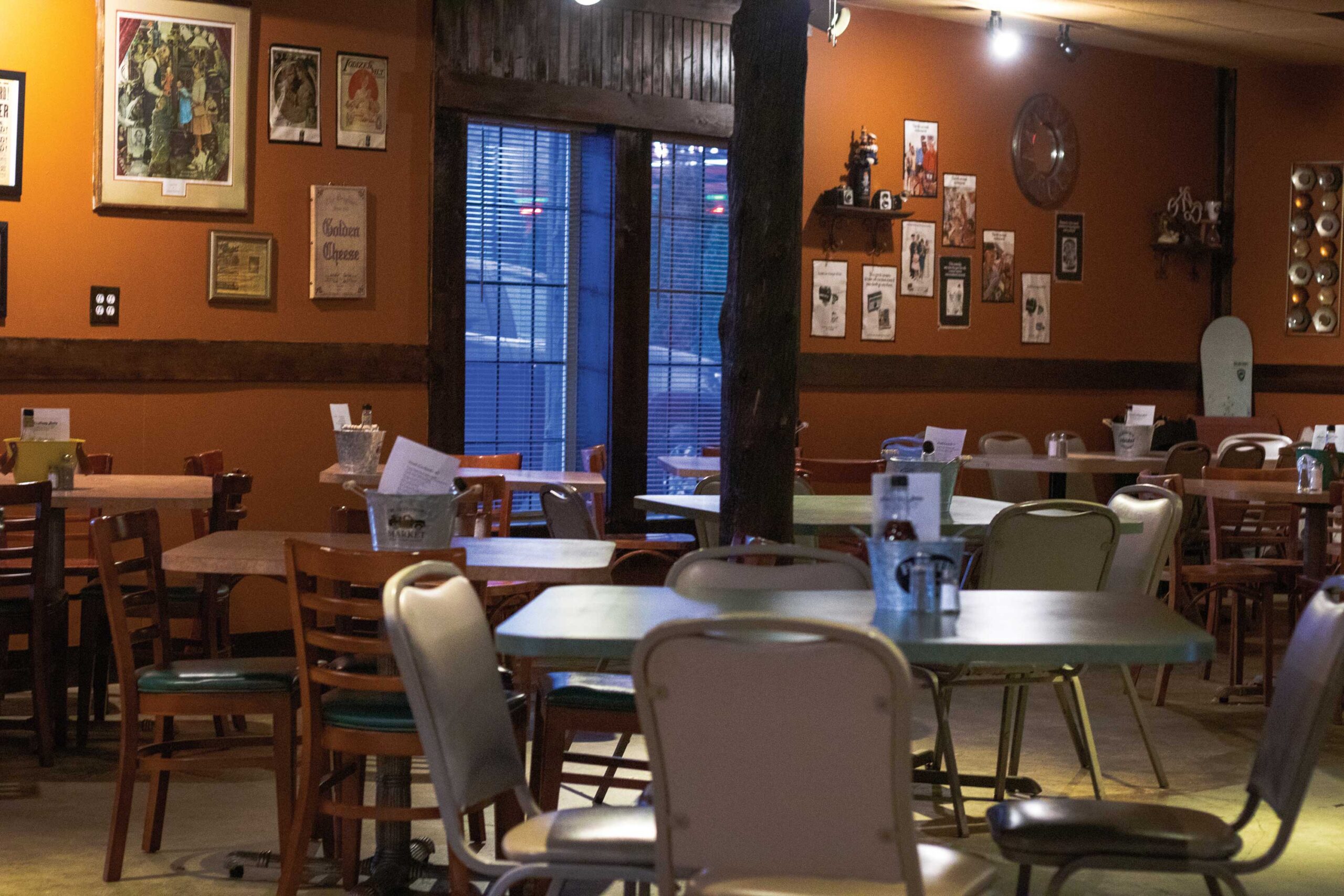 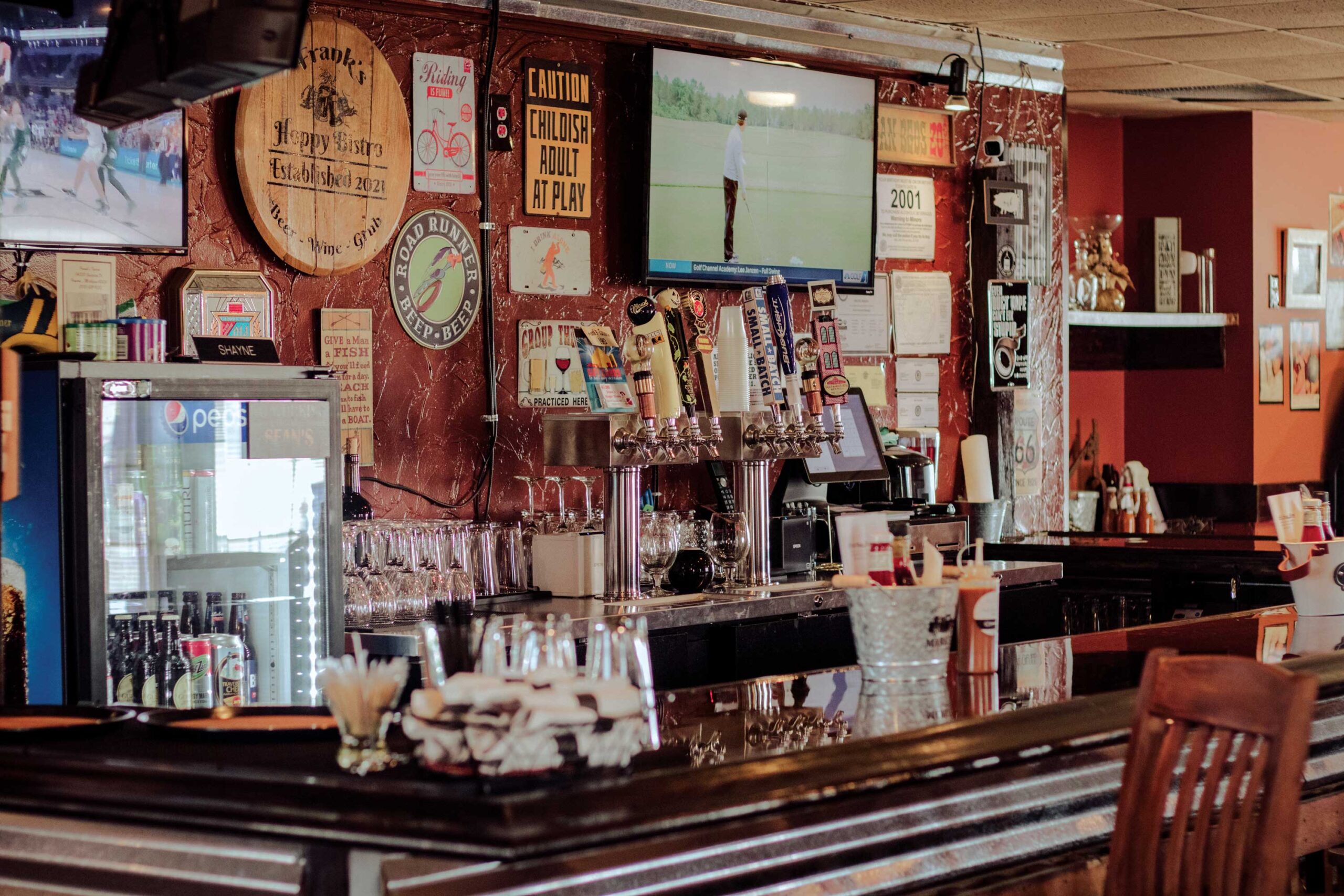 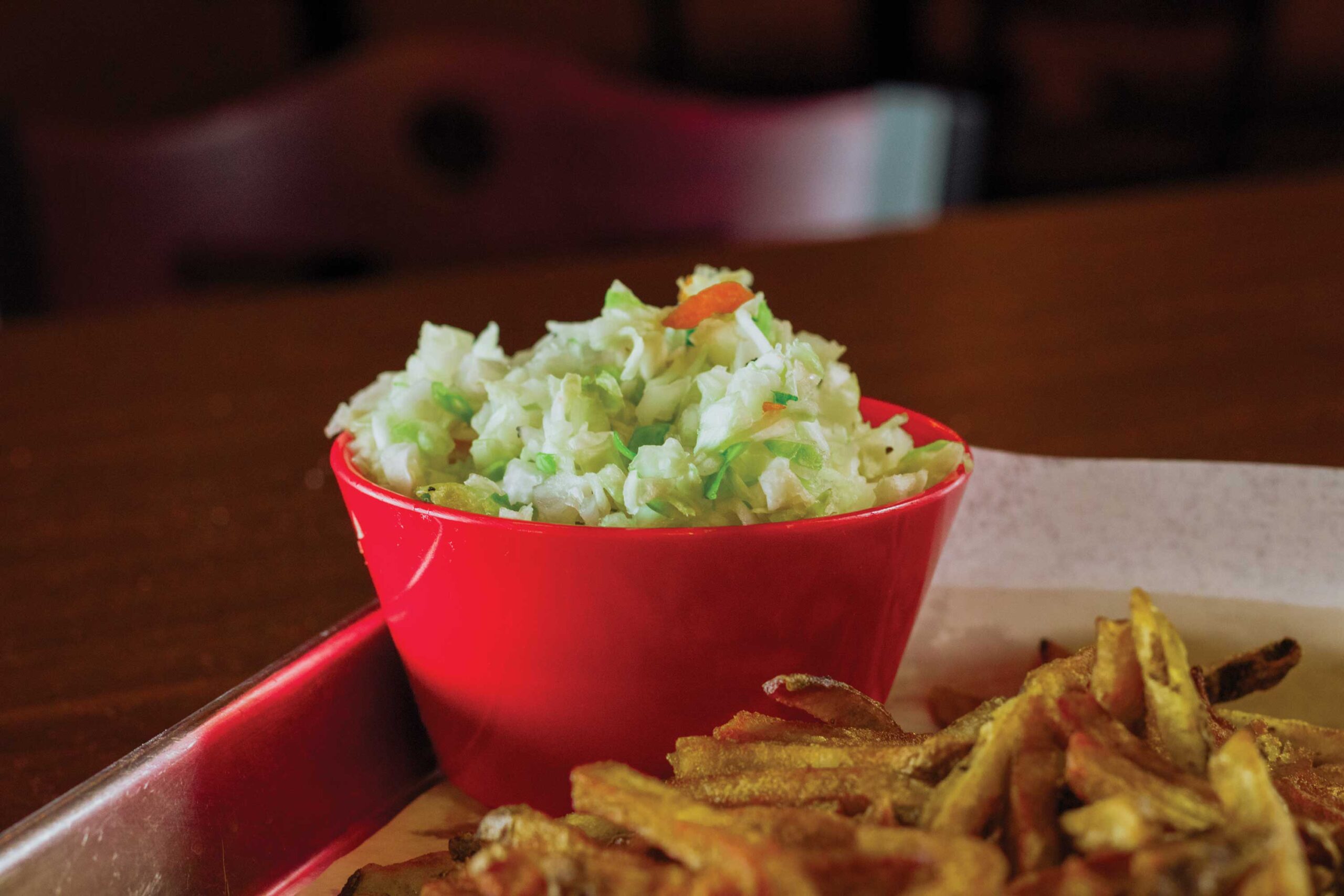 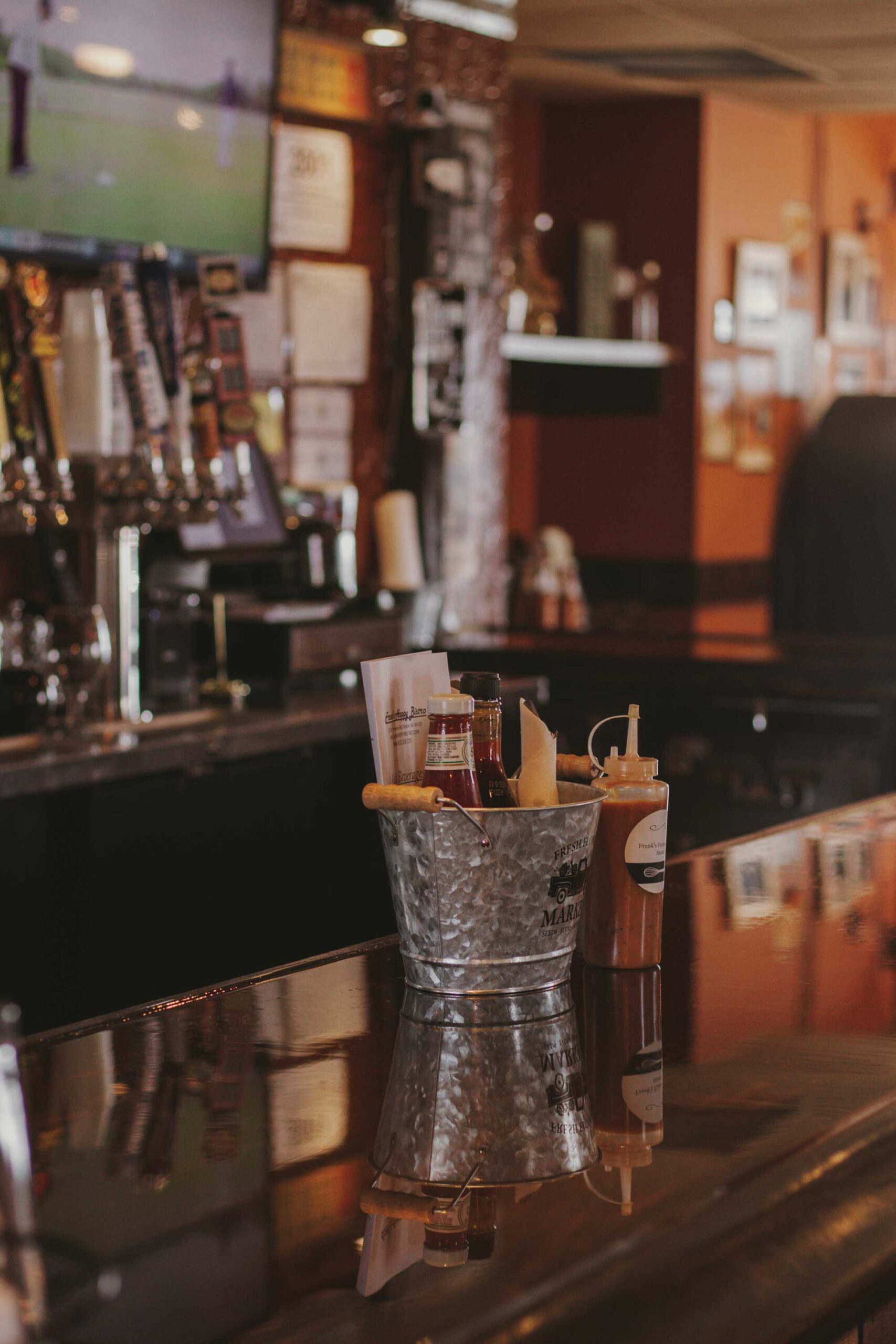 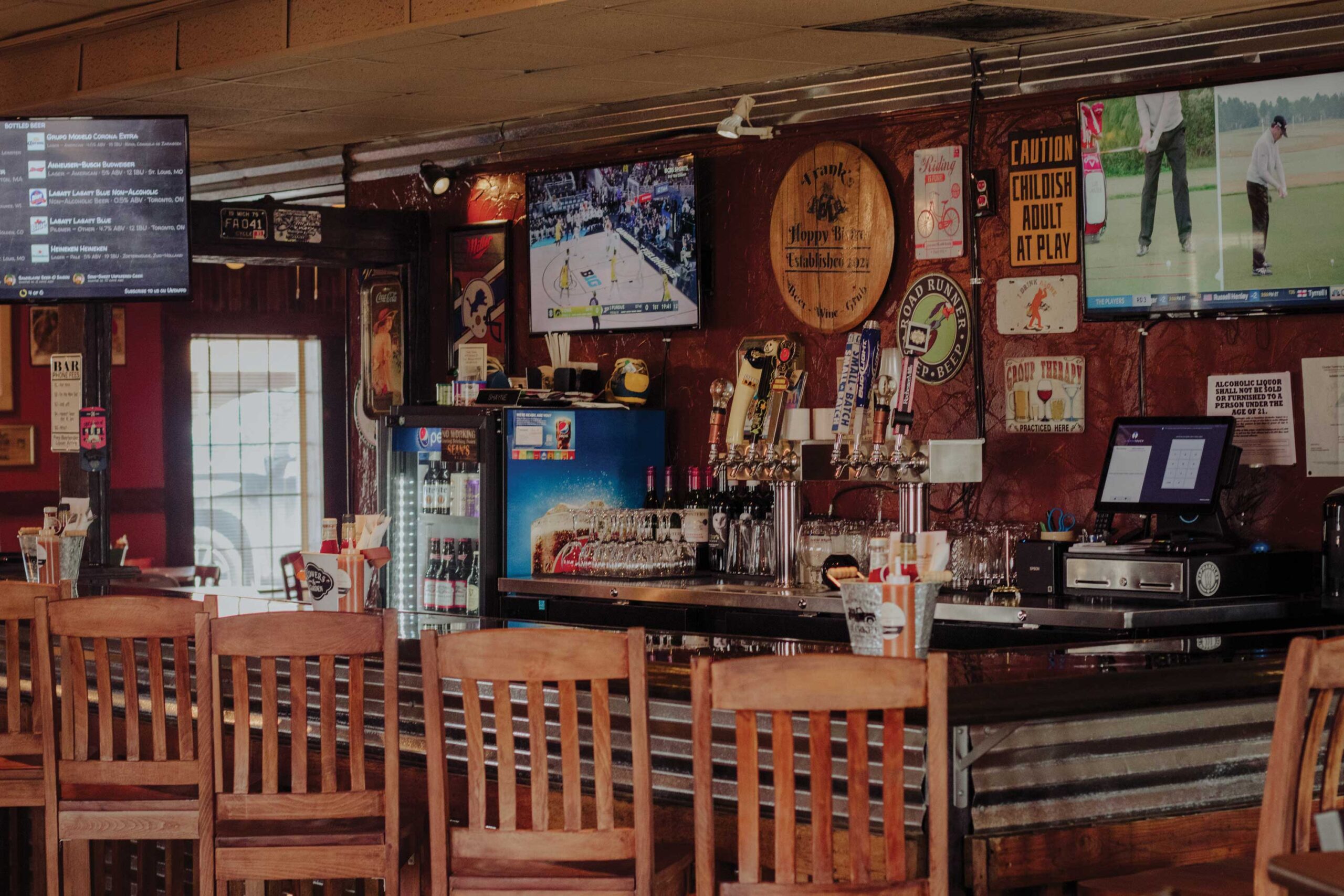 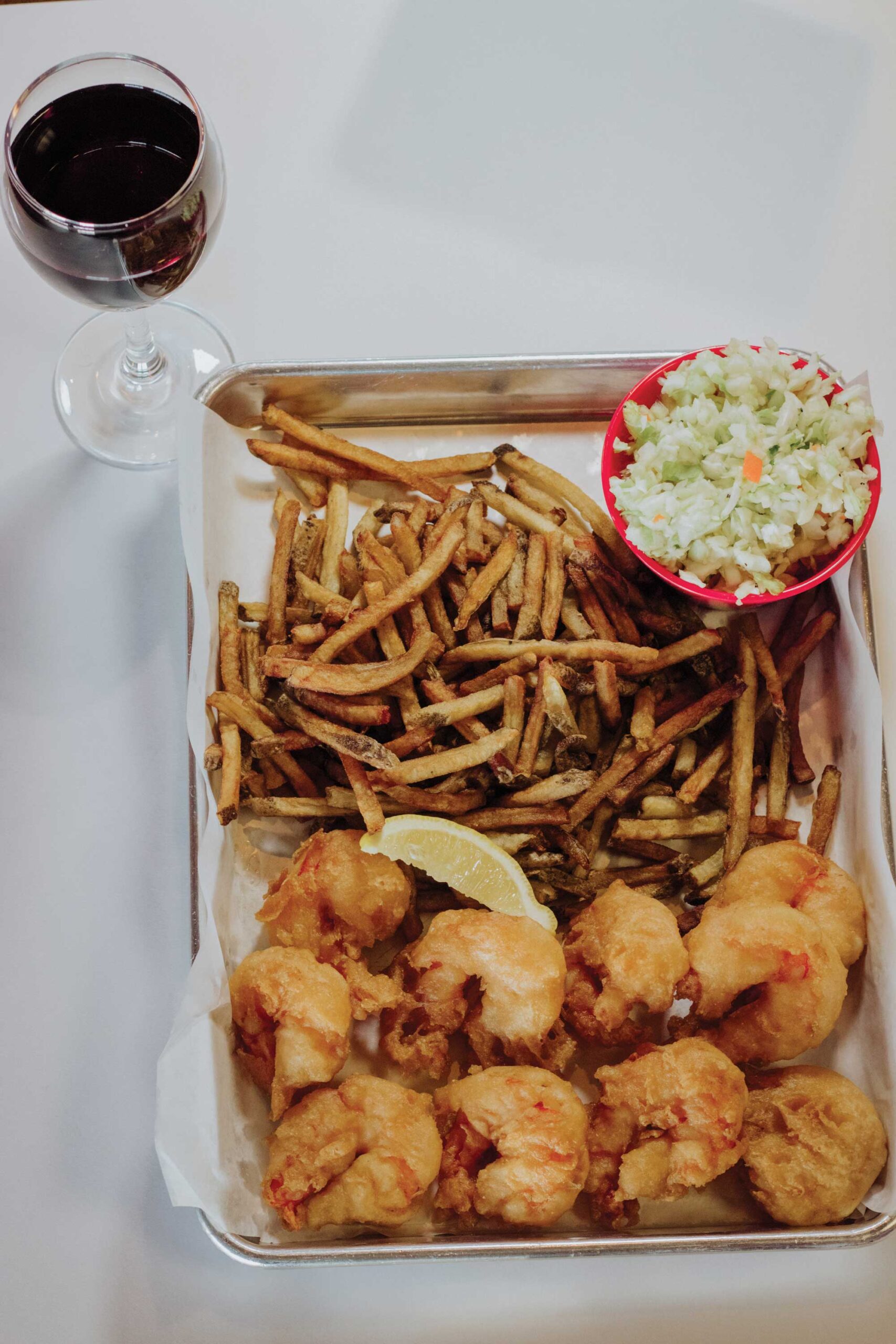 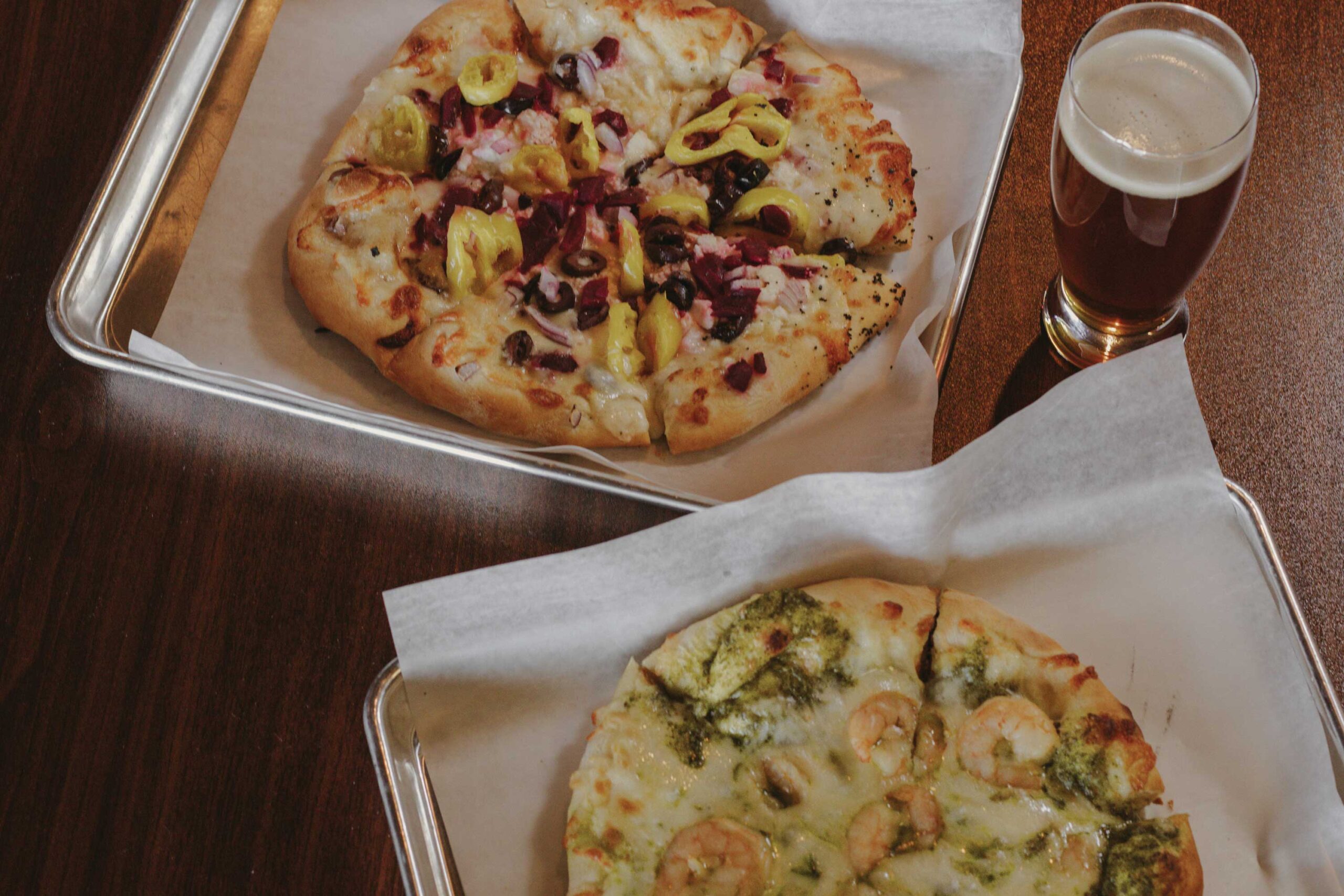 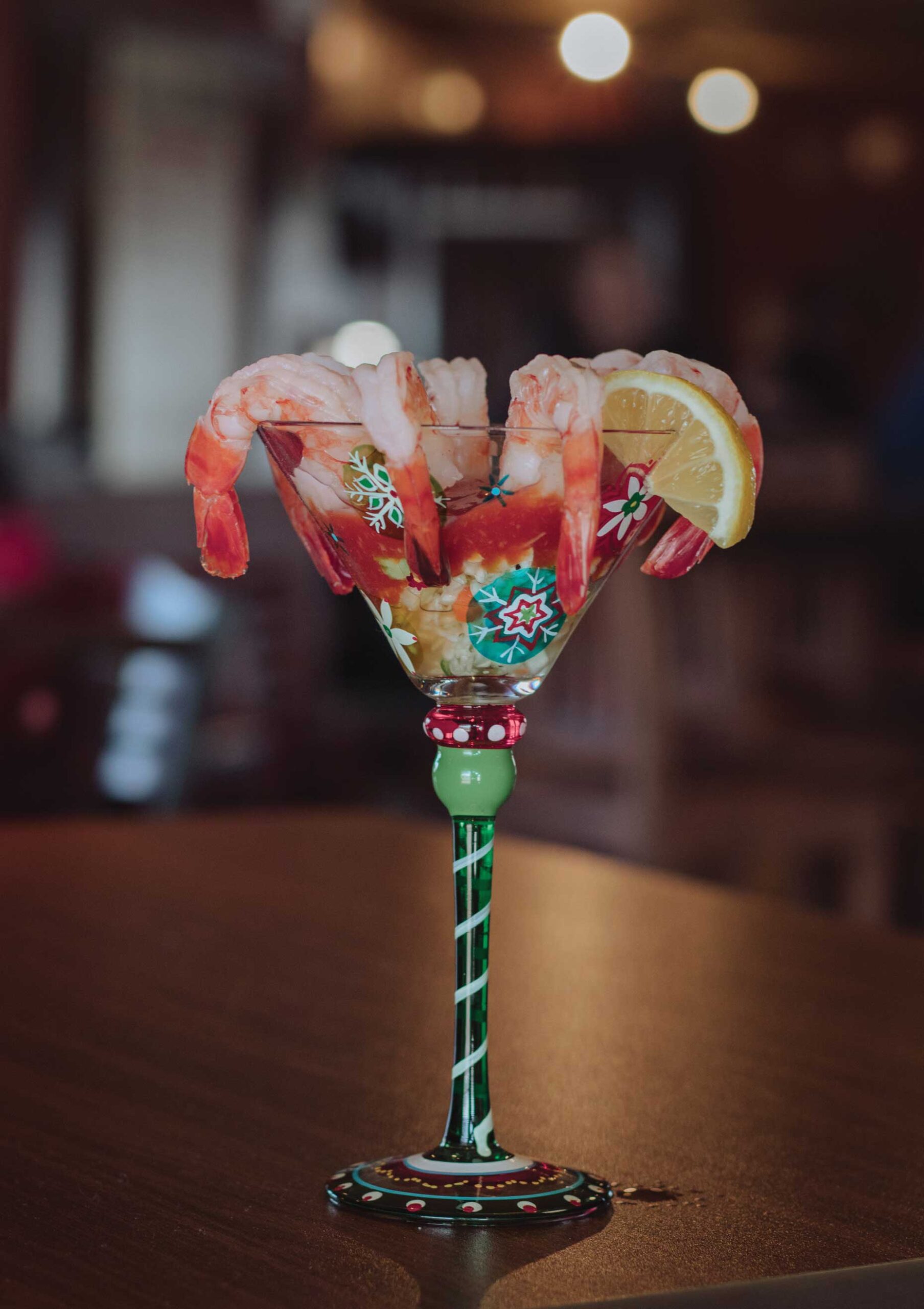 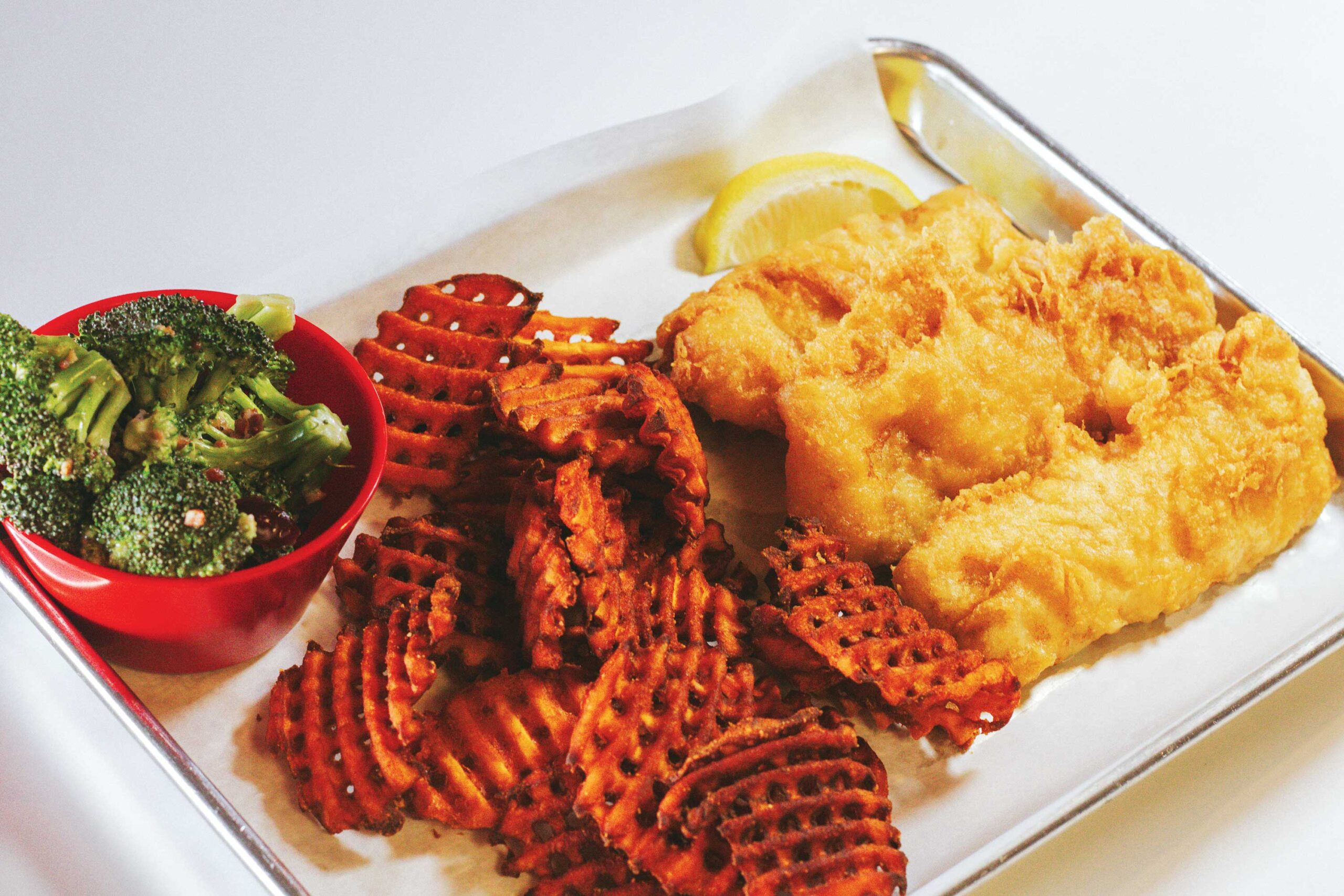 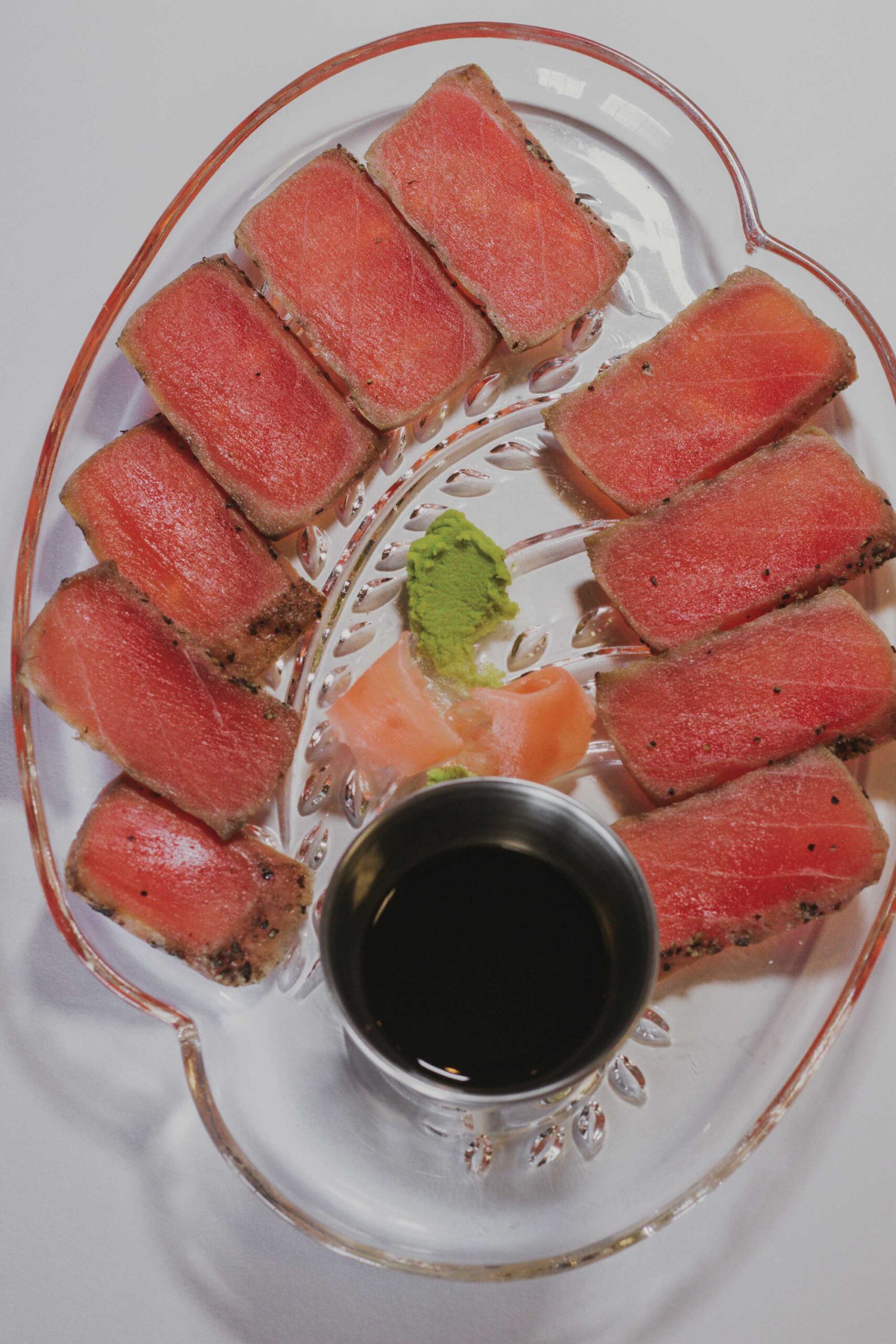 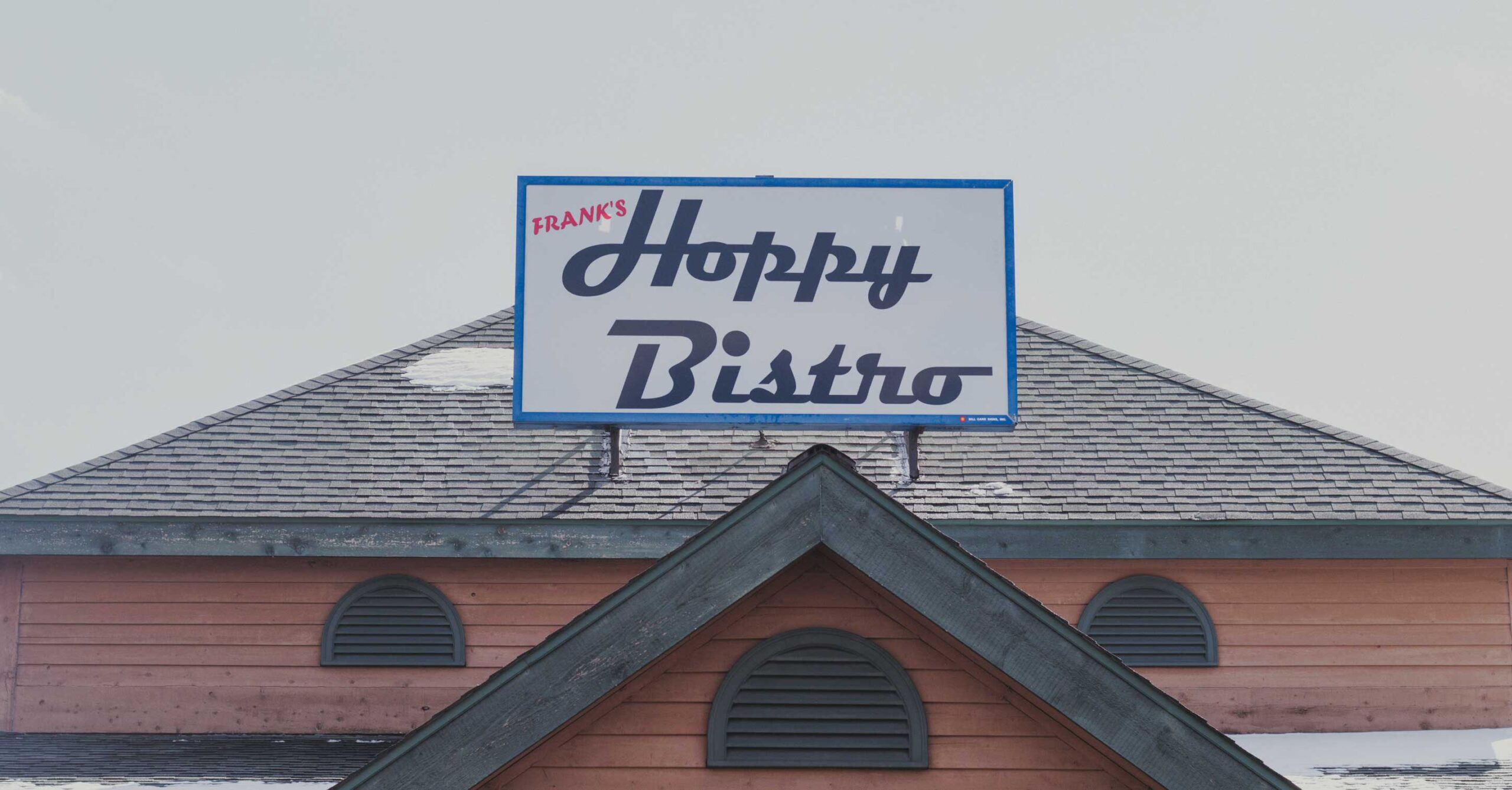 Of course, the seafood is the main draw at Frank’s Hoppy Bistro and the menu is continually being updated. You will find haddock, cod, smelt, frog legs, jumbo shrimp (fried or steamed) as well as clam strip and jumbo scallop dinners. Meals are served with hand-cut fries and the famous slaw. The seafood is lightly breaded using Frank’s original recipes. “I say it’s made with love,” Rachel adds.

Soup is another popular item at Frank’s. “The lobster bisque is the best I’ve ever had,” says Shayne. And the clam chowder is chock full of clams. “It’s so good!” Other choices include seafood gumbo, loaded potato and broccoli cheese. The hand-cut fries are also a fan favorite. “It’s a lot of work but worth it,” Rachel admits. The Tower of Onion Rings is also a big seller. 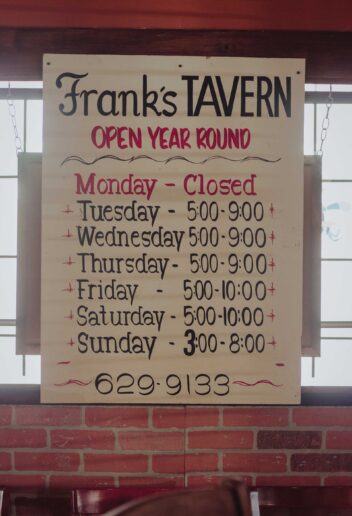 Frank’s menu also includes a nice variety of appetizers. “People have gone crazy over our calamari, which we serve with a butter-caper sauce,” Rachel points out. The gator bites are popular and unique because not many restaurants serve them. Rachel also makes some yummy desserts for a sweet ending (if you have room), including coconut cream, banana cream, chocolate cream and lemon meringue pies (the choices rotate daily).

The walls of the eatery are filled with memorabilia from Frank’s Tavern, including the original hours sign. “Former Frank’s customers take photos under the sign,” says Rachel. “It’s like walking into a time machine. It’s the real deal. We brought the flavor of Frank’s to our new restaurant. It’s been so nice to see familiar faces.”

Keeping service running smoothly is a staff of 20, including three of Rachel’s sons. “It’s kind of a family affair,” she says with a smile. Two of the chefs worked at the original restaurant.

Opening Frank’s Hoppy Bistro has been a dream come true for the very hands-on owners. “It’s really fun to see old friends,” Rachel says. “This has always been my passion and it is important to me to interact with our customers.” Shayne is happy with the couple’s restaurant venture. “Bringing back an institution like Frank’s exceeded our wildest expectations!” One of their biggest supporters, Ron Kramer, thought of a catchphrase that sums it up: “Frank’s is frying tonight!”