In the beginning, Ellen Tomek’s rowing goals were rather modest.

Not long after starting classes at the University of Michigan in the fall of 2002, the former Flint Powers Catholic basketball and softball standout found herself seeking a new competitive outlet.

The answer came in the form of a flier announcing tryouts for the University’s Novice Women’s Rowing Team.

“My biggest goal at the time was finding a way to stay fit and not experience the weight gain that sometimes happens to college freshmen,” Tomek recalls. “I saw the flier for rowing tryouts and felt I would love to be in a sport where you get to drive to a lake to practice, because I spent so much time on the water growing up. So, it was a great way to stay in shape, meet new people and avoid putting on the ‘Freshman 15’ pounds.”

Tomek, who treasures time spent at her grandfather’s cabin on Avalon Lake in Hillman, made the squad and accomplished that goal. She didn’t gain an ounce and was soon dreaming bigger dreams.

From that point, Tomek began a crazy ascension in the sport, pursuing and realizing ever loftier goals. In a mere six years, she transformed from novice to Olympian.

By the next season, Tomek was promoted to the Second Varsity Eight boat. As a senior, she moved up to the First Varsity Eight, made Second-team All-Big Ten, Second-team All-American and was named Michigan’s Rower of the Year. Later that same year (2006), Tomek made the first of 11 appearances in a Team USA uniform, placing fourth in the pairs competition at the U23 World Championships with former Michigan teammate, Stesha Carle. 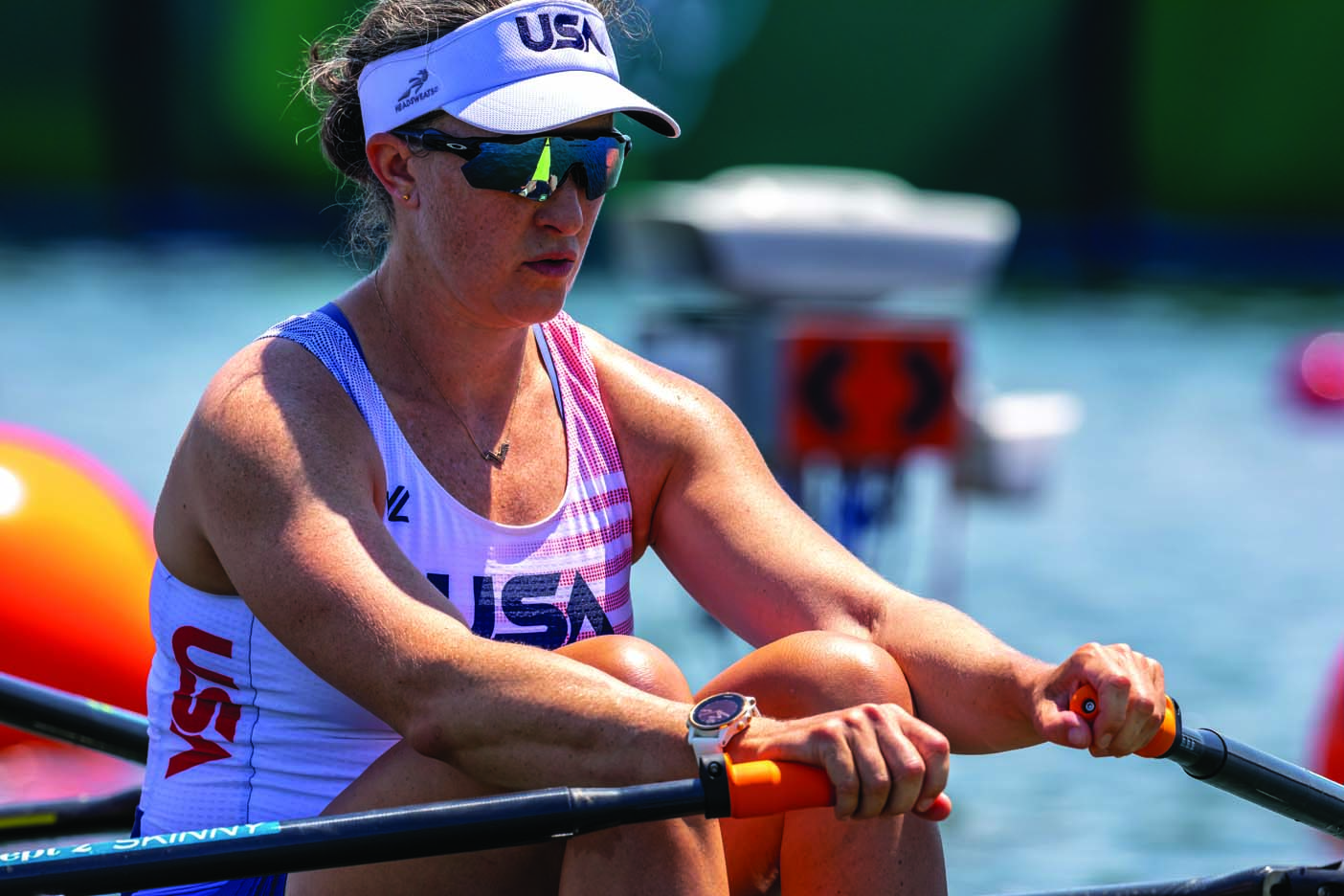 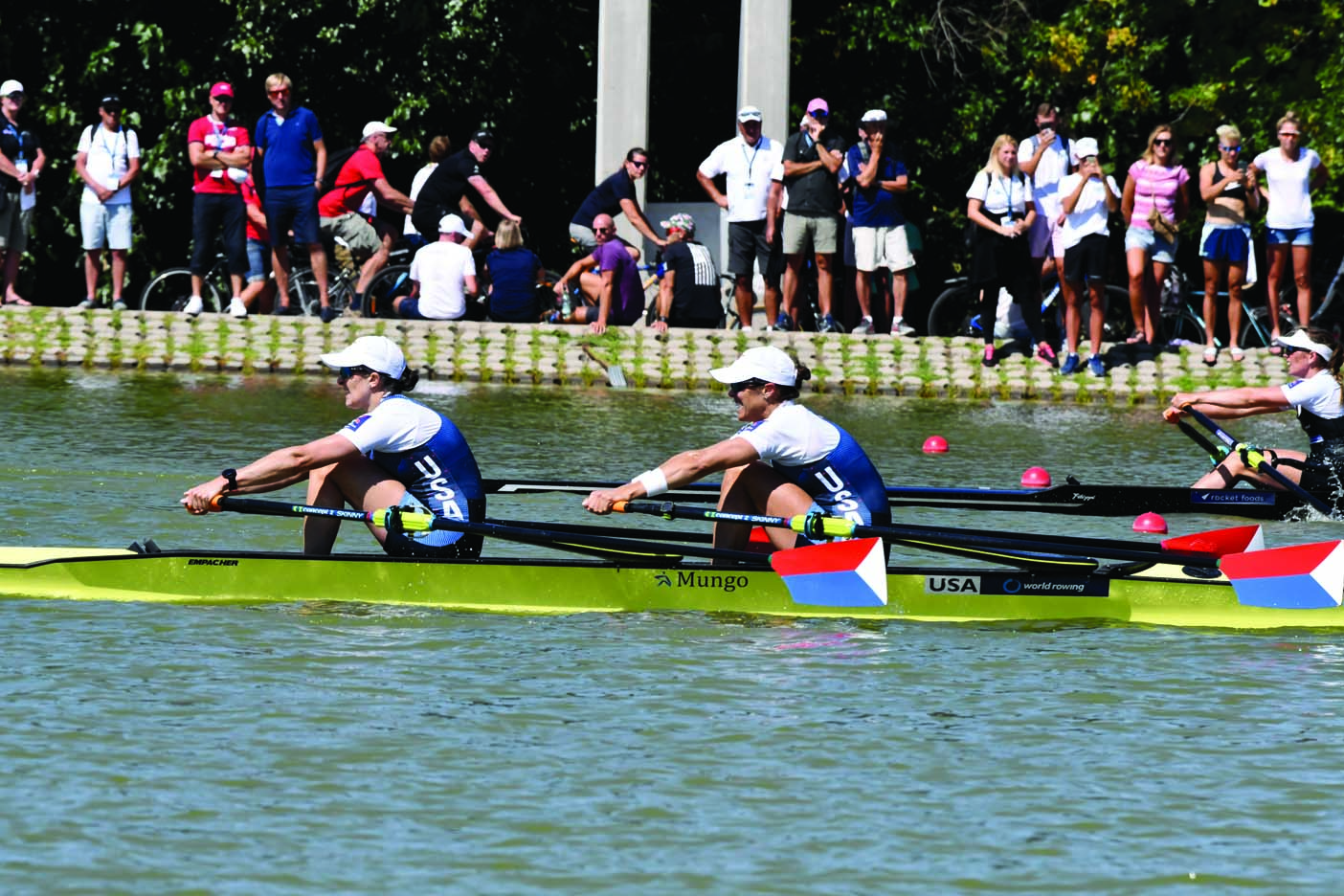 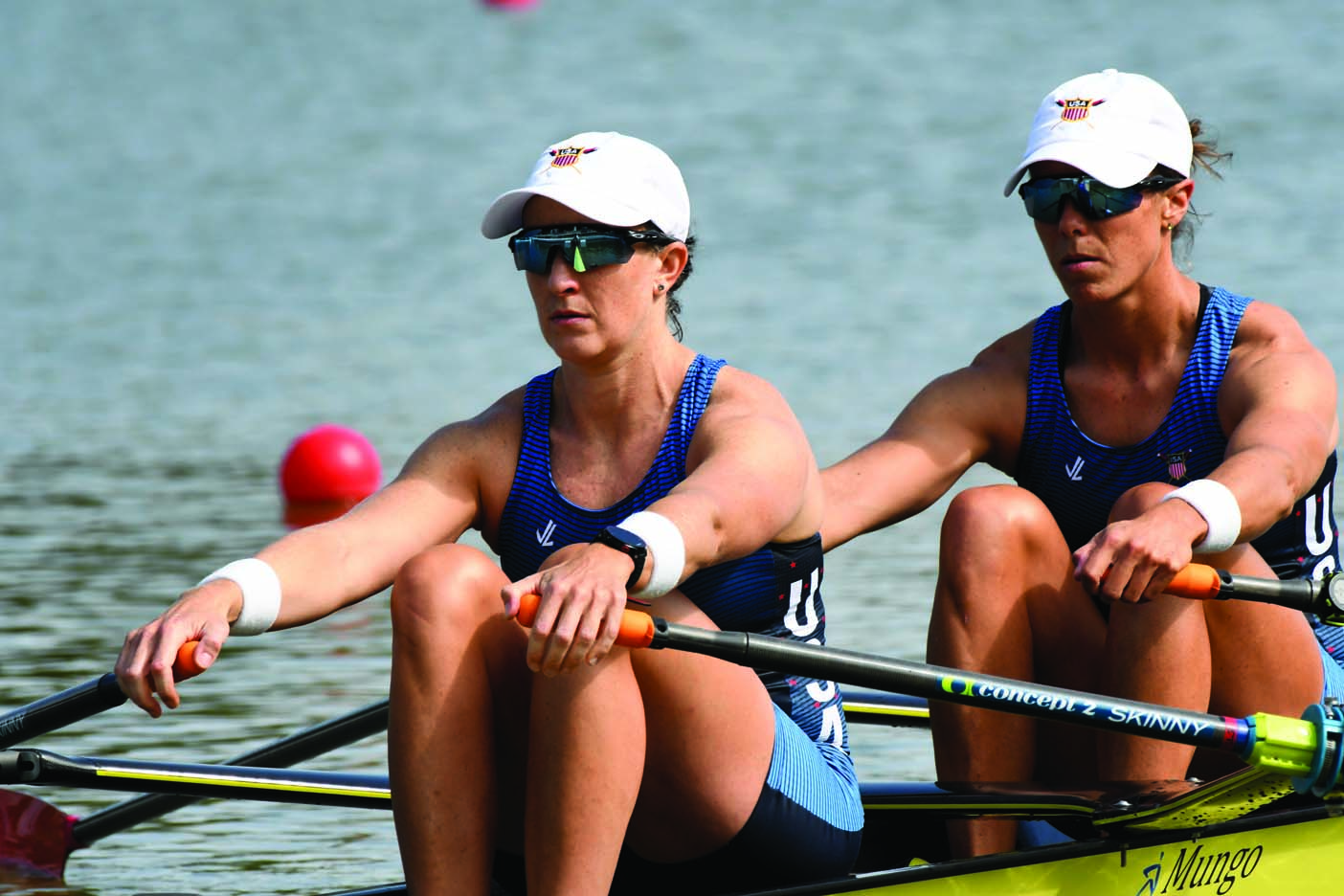 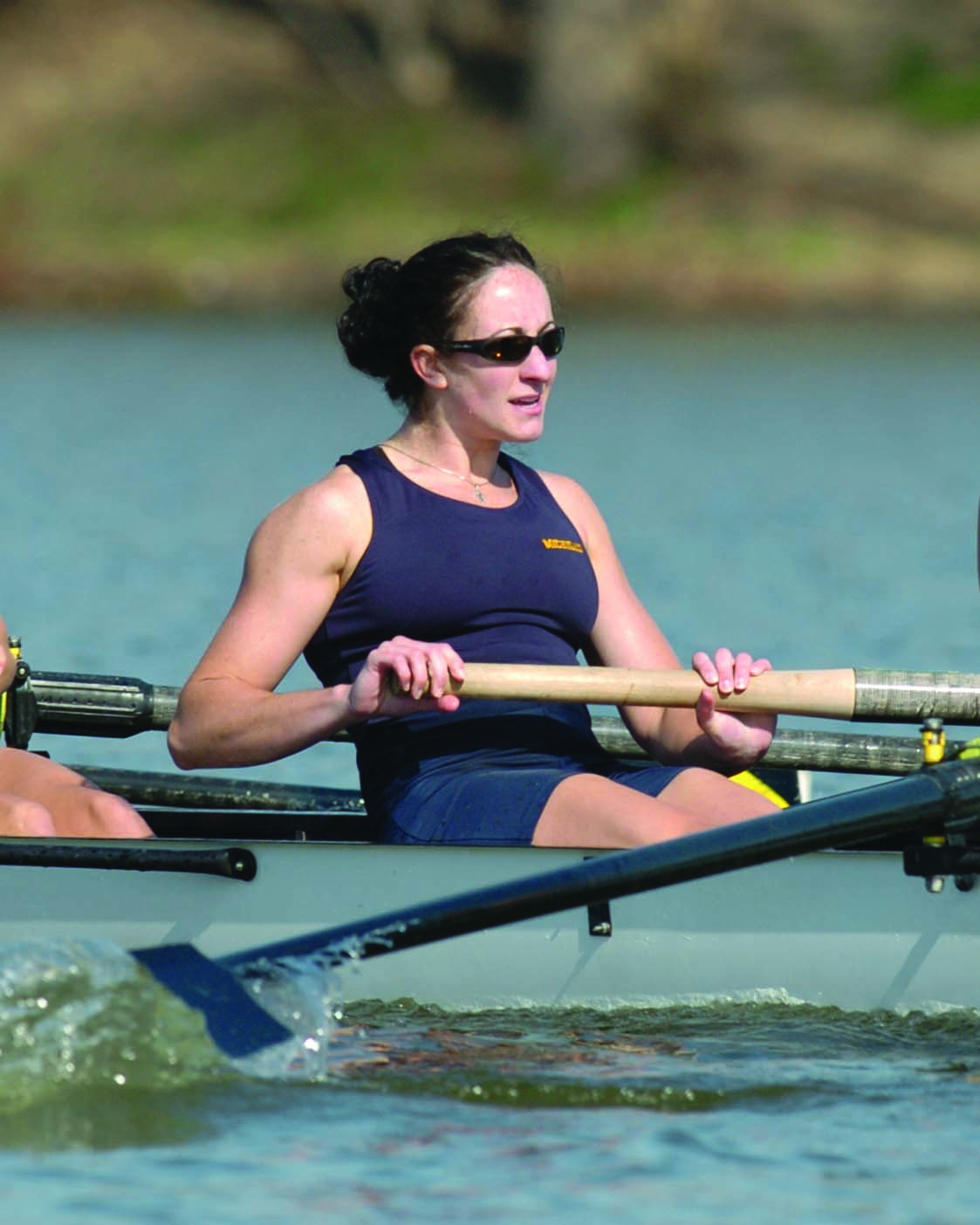 The next year, Tomek competed in her first World Championships, finishing sixth in quadruple sculls. At the 2008 Olympics, she placed fifth in double sculls with partner, Megan Kalmoe.

By the time Tomek finally retired last year, she had placed in the top ten at three Olympic Games and in the top six at five World Championships, including two medals. She also won five Rowing World Cup medals and was named 2017 Female Rowing Athlete of the Year by US Rowing. 

Tomek and hurdler Tiffany Ofili-Porter are the only female University of Michigan athletes who have competed in three Olympics.

The 38-year-old, who now lives in Hollister, CA has continued receiving accolades in retirement. In April, The Michigan Daily, Michigan’s campus newspaper, included Tomek in an article entitled “5 Impactful Wolverine Women,” along with the likes of Federal Reserve Bank of Boston President Susan Collins and 20-term U.S. House of Representatives member, Marcy Kaptur. 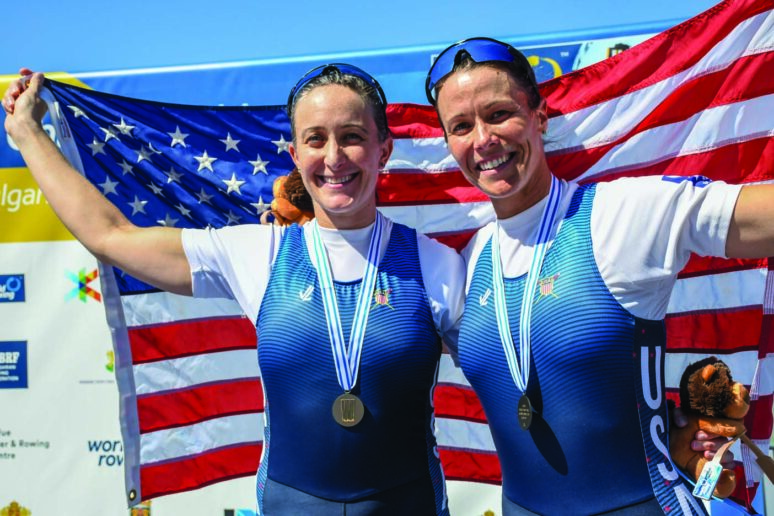 Tomek (left) and O’Leary captured the bronze medal at the 2018 World Championships.

“What Ellen achieved is no surprise to me. She is a great person with great character who embraced the concept of working as a team right away.”

“For me, the Hall of Honor is an incredible honor because it’s a reflection of my entire career and not just a moment in time like a race medal is,” she says. “It’s really a special appreciation and recognition for what I’ve accomplished as a whole. Being part of the article about Michigan’s most impactful women also meant a great deal because it’s a reminder of the influence you can have by being successful over a long period of time.”

And the secret to that success?

“Overall, for me, it was just dedication and a love of the sport,” Tomek says. “Also important is the ability to regulate your emotions and handle all the highs and lows. If you celebrate a win for too long or spend too much time dwelling on a loss, you are going to get caught off guard by the competition during the next race. It’s crucial to stay focused on preparing for each individual race.”

Mark Rothstein, who recently completed his 31st season as U of M’s head rowing coach, vividly recalls the freshman from Flushing who took to the sport like, well, like a fish takes to water.

“We never recruited Ellen and had no idea who she was until she made the team at that open tryout, but she was a really good athlete and began developing as a rower,” he says. “Sometimes, a talented basketball or volleyball player wants to try rowing, but does not always respond to the very demanding training. Ellen really took to the training, kept getting better and I knew she would continue getting better after she left Michigan.” At U of M, Tomek helped the Wolverines win a Big Ten championship and third-place finish at the NCAA Championships her sophomore year, and take eighth at the NCAA Championships as a junior.

As a senior, she was in the third seat on the First Varsity Eight boat which was second at the Big Ten Championship and sixth at the NCAA Regional. 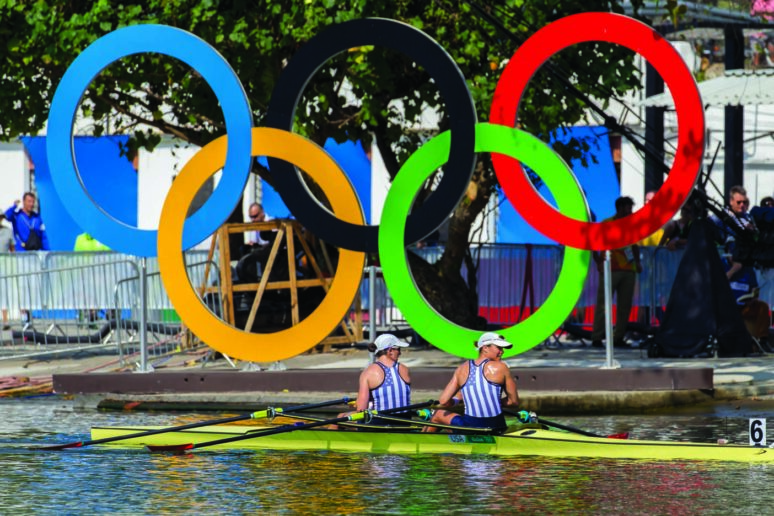 “I became really motivated to work my way to the First Varsity Eight,” Tomek says. “I really looked into the numbers and concentrated on how I beat my previous performance the next time. Over time, a lot of learning from coaches and teammates and extra work like studying video paid off.”

All that work resulted in Tomek dropping her best time in a six-kilometer time trial by over a minute during practice in her senior year which prompted a question from Rothstein.

“Have you ever thought about making the national team?”

“I was like ‘Honestly, no. Not until right now’ because I had not been close to fast enough,” Tomek recalls. “After that, I began thinking how I could make that happen.”

Tomek and Carle were among those invited to US Rowing’s U23 Selection Camp which began about three weeks after Tomek’s college career ended. Not only were both picked for the World U23 Championships in July of 2006, but they were paired with each other.

Heading into Olympic year 2008, she had also discovered something.

“During the process of making the 2007 World Team, I really took to sculling which is different from the sweep-rowing we did at Michigan,” she explains. “I had been aiming more for the 2012 Games when I moved to New Jersey, but began to think I was good enough to make it in 2008.”

The grueling training that Tomek thrust herself into during a 15-year international career resumed. Throughout much of the year, she trained for six hours a day, six days a week in the gym or in a boat before 1-2 hours of what she calls “recovery training” on the seventh day.

“There was never a time when I was not training, it’s a full-time job; although I was able to earn some extra money coaching,” she shares. “Doing what it takes to recover in time for the next practice is as important as things like getting enough sleep.”

Tomek focused on making the Olympic team in double sculls. At a Team USA camp in San Diego during the winter prior to the Games, coaches paired Tomek with Kalmoe for the first time.

“Literally from the first strokes off of the dock, it felt like we were absolutely flying,” Kalmoe wrote in a blog post in 2013. “I had never had a boat move so well. Both of us were caught by surprise. We started beating all of the other doubles (pairs) – crushing them.”

The pair won a National Selection Regatta before placing seventh and fourth at two World Cup events which resulted in being selected for the Olympics.

In Beijing, Tomek and Kalmoe placed third in their heat before winning their repechage to qualify for the final. 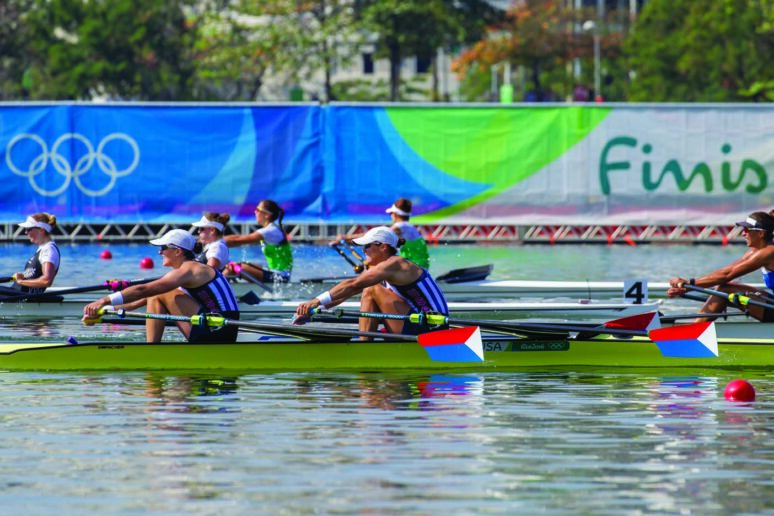 “I was a little starstruck at that first Olympics and felt like I was part of a Cinderella story,” Tomek says. “Winning a medal was what we worked for, but it was a great experience staying in the Olympic Village, meeting athletes from other sports and other countries.”

Tomek and Kalmoe followed the Olympic performance with a sixth-place finish at the 2009 World Championships, but rib injuries then began taking a toll on Tomek.

She struggled to stay healthy from 2010-2012 and did not qualify for the 2012 Olympics. Kalmoe then shifted her focus to quadruple sculling and Tomek began the next chapter of her career with new partner, Meghan O’Leary.

They finished seventh at the 2013 World Championships and sixth in 2014 before slipping to 11th in 2015. However, Tomek and O’Leary bounced back when it mattered most in 2016, winning the Olympic Trials.

At the Olympics, they finished just fourth in their heat, but rebounded to place second in the repechage. In the semifinals, they roared past the two-time defending  world champions from New Zealand to snag the third and final spot in the gold medal final where they finished sixth.

The pair’s greatest success came at the 2017 World Championships when they captured a silver medal, beating two of the teams that had finished ahead of them in the Olympic final. No American pair had ever finished higher in the event in the World Championships and none had even won a medal in 27 years.

Later in the year, while eating lunch at a Whole Foods store, Tomek received a call from someone at US Rowing and learned her female peers on the national team had voted her Female Athlete of the Year.

“That was an incredible and emotional moment because it’s an award you only receive through voting by others in the sport, which means everything to me,” she says. “I had actually missed about six months of actual rowing training from the start of that year with an elbow injury, but the World Championships were not until late September. It shows that you never know what can happen on any given day.”

They followed that success with a bronze medal at the 2018 World Championships.

Tomek emerged from the chaos of the coronavirus pandemic, often having to train alone, with one more shot at Olympic glory. She was selected for Team USA’s quadruple sculls boat for the Tokyo Olympics along with O’Leary and Olympic rookies Alie Rusher and Cicely Madden. 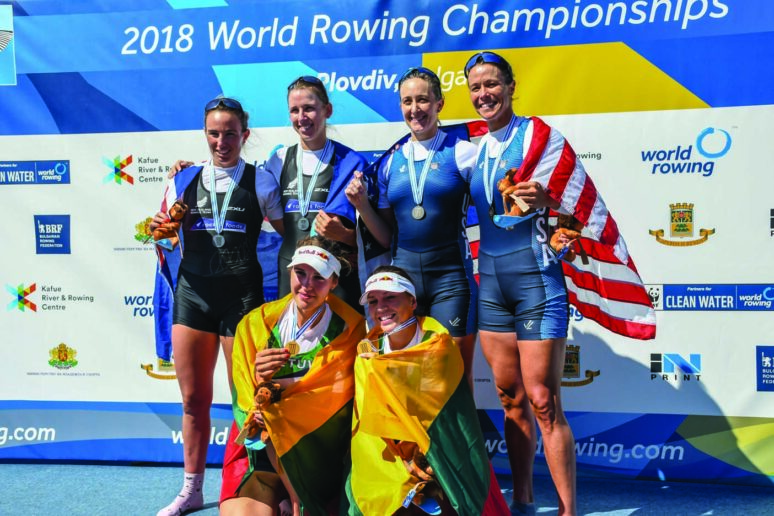 “Ellen’s international success is a testament to her dedication to training and the perseverance to continue working through any setbacks for a period of 16 years,” Rothstein says. “She worked hard to develop great top-end speed to really go hard and great aerobic capacity, so what Ellen achieved is no surprise to me. She is also a great person with great character who embraced the concept of working as a team right away.”

These days, Tomek is part of the team at VISA financial services, working as a risk and fraud concerns account manager. Away from the office, she now keeps fit on land through activities like mountain biking and hiking and is enjoying more time with family and her two puppies.

“I miss the racing, but not the day-to-day training of rowing which started to take a mental toll on me,” she says. “My new job of putting out fires for people with concerns about their credit accounts is very satisfying. I’m just enjoying some things I have not had time for and loving this chapter of my life.”