Principal Harpist for the FSO and Windsor Symphony Orchestra, Amy Ley has held the principal harp position in the Lansing Symphony, Ann Arbor Symphony, and Saginaw Bay Orchestras. She has also performed with the Grand Rapids Symphony, National Ballet Orchestra in Toronto, Kitchner-Waterloo Symphony, Orchestra London, Toledo Symphony, and Charleston Symphony. Her performance of the “Flute and Harp Concerto” by Mozart with the Windsor Symphony has been broadcast on the Canadian Broadcasting Corporation’s radio network across Canada and the United States. She also performs as a part of the Walla Walla Chamber Music Festival in Washington and the Lancaster Music Festival, Ohio.

Ley is the harp instructor at Hillsdale College and the University of Windsor and has been a harp instructor at Blue Lake Fine Arts Festival for over 15 years. She also works extensively with elementary-age children in her Windsor-based “Music for Young Children” program.

“In Ley’s hands, the harp, that most heavenly of instruments, glows even brighter.”
The Windsor Star 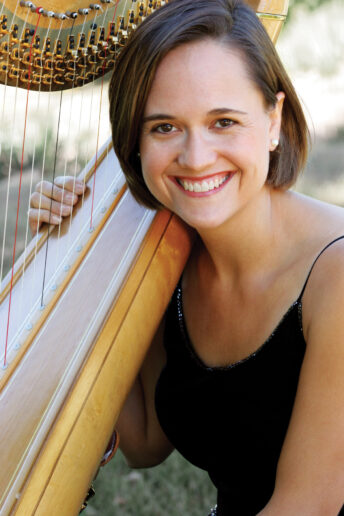 Championing classical music in her home community of Windsor, Ontario, Ley is a founder, artistic director, and regular performer in a chamber music series called 4th Wall Music. This series aims to connect with new audiences by collaborating with musicians and a wide range of other local artists. Ley also pursues her love of chamber music as a member of the Michigan Harp Ensemble, the new music ensemble Brave New Works, and various other stages.

Ley received both her bachelor’s and master’s degrees from the University of Michigan under Lynne Aspnes. She attended the Harp Colony in Maine, the Aspen Music Festival, the Pacific Music Festival, Pine Mountain Music Festival and was a top prizewinner in the Young Professional Division of the American Harp Society competition.

Conducted by Maestro Enrique Diemecke, the November 13 performance will feature:

Experiences with nature are a common thread that weaves through all living beings, so it’s no surprise that humans have been writing music inspired by nature since the beginning of time. This program begins with Debussy’s Danses sacrée et profane, a solo piece for harp and orchestra, and a harp repertoire’s mainstay. These contrasting dances conjure a mystical and spiritual natural world. Danse sacrée creates a relaxed and eerie mood, while Danse profane is more energetic, with luscious harp glissandi and solo work overlaying pulsating string rhythms.

Beethoven’s Symphony No. 6, Pastoral, is a jaunt through the Austrian countryside. Beethoven was a lover of nature and frequently traveled to rural areas to compose. The symphony is comprised of five movements, each based on a different experience in nature. The joyful first movement is entitled “Awakening of cheerful feelings on arrival in the countryside,” followed by the idyllic second movement, “Scene by the brook.” Joy emanates from Movement 3, “Merry gathering of country folk,” but the party gets rained on with Movement 4, “Thunder, Storm.” Finally, the clouds part, and the sun shines through with Movement 5, “Shepherd’s song, Cheerful and thankful feelings after the storm.” Pastoral is one of Beethoven’s few explicitly programmatic works and is a true masterpiece for all to behold.

The November program closes with The Moldau, a symphonic poem composed by Smetana. This piece follows the flow of the Vltava River from its source in the mountains of the Bohemian Forest, through the Czech countryside, to the city of Prague. The piece opens with light rippling figures representing two mountain springs that eventually converge to become a mighty river, symbolized by a thickly orchestrated, stately theme. The river passes scenes of rural life, water nymphs, rapids, then finally reaches Prague and slowly dissipates in the distance.