Yes, dreams do come true. For Stacie Scherman, who recently obtained her graduate degree in English at University of Michigan-Flint, her dream of business ownership became a reality this year with the launch of the Flint Podcasting Company. In starting the business, Stacie has merged her talents and her passion for Flint. “I will produce some of the podcasts myself, as well as host podcasts produced by other people,” Stacie says.

A podcast is defined as “a form of digital media that consists of an episodic series of audio, video, digital radio, PDF, or ePub files subscribed to and downloaded automatically through web syndication or streamed online to a computer or mobile device.” The word podcast is a combination of the words “iPod” and “broadcast.” “It’s a digital audio file,” explains Stacie. “It’s something you can put online, download or stream from a website.” Podcasting is attractive to people who want the ability to choose their own content – instead of the TV and radio model of broadcast in which you tune in and select from one of the programs already playing. 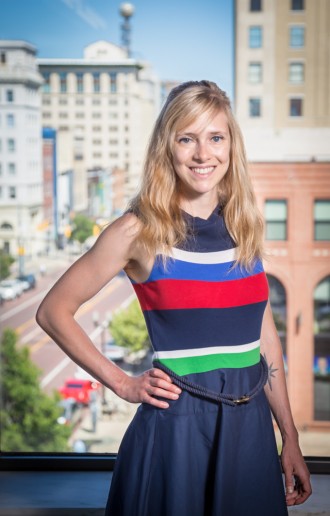 Stacie’s studio is located on Flint’s south end and is currently under renovation. Her goal is to have it open in August. She is currently working on a podcast that will profile area businesses; she plans to have the first pilot episode available sometime this month. The podcast will reflect the perspectives of a variety of business owners – their success stories and their struggles. “I want to get perspectives from many different entrepreneurs in the area,” she says. The purpose is to give viewers who don’t live in this area a look at “the other side of Flint.” “When people look at Flint, they see water crisis, gun violence, emergency managers. They don’t see all the energy I see: the people who are doing something, creating something and trying to build this city back up.”

Stacie is also working on another podcast. “I envision having a live storytelling event,” she says. Flint has a large community of poets, artists and musicians who have interesting stories to tell, and her idea is to have people come to the studio and tell their own personal stories, which will be recorded as a podcast. She is also forming partnerships with other podcasters with whom she will collaborate and make podcasts as a team.

Stacie submitted a business plan in the Green Light Business Model Competition at their satellite competition in Flint in January. “I won first place!” she exclaims. She used the $5,000 winnings as seed money for the recording studio. She also won another $5,000 when she took second place in the UM-Flint Business Plan Competition, which is sponsored by the School of Management and the Hagerman Center for Entrepreneurship & Innovation. “If I hadn’t won those, I wouldn’t have been able to do what I’m doing now,” she shares. “It really helped push me to the next level.”

According to Stacie, the popularity of podcasting is rapidly growing. With Apple® having an iPhone® Podcast App, it is even more accessible. Stacie is always looking for ideas and additional collaborators, as well as people to tell their stories. And, she is very excited about the future of her business. “I’ve been an entrepreneur since I was five,” she says. “It’s fun to put into practice what I have been dreaming about for years!”

For more information about the Flint Podcasting Company visit FlintPodcasting.com. Check the website later this month to listen to the first episode.