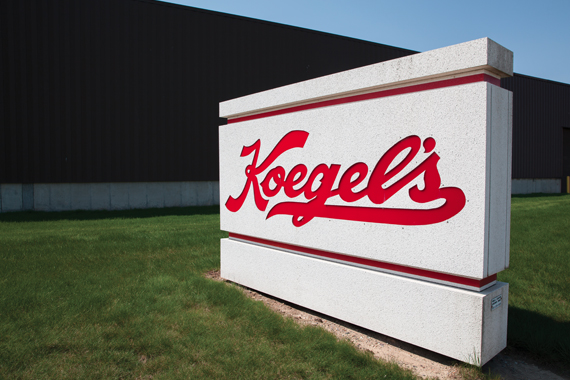 It’s summertime … time to watch some baseball, fire up the grill and enjoy one of America’s all-time favorite foods – hot dogs. And statistics indicate that Americans consume a whopping nine billion hot dogs each year! Many folks around Genesee County believe that it isn’t a real hot dog unless it was made at Koegel Meats right here in Flint. Why? According to John Koegel, president of the family-owned, nearly 100-year-old company, it’s because Koegel’s uses high-quality ingredients and lives by its slogan – Made up to a quality… not down to a price – and because they still use the original recipes and processes learned and developed by the founder, Albert Koegel. In the early 1900s, Albert was educated in the meat business through an apprenticeship program in Germany.

After completing his education, Albert moved to America and then to Flint to pursue a dream of starting his own meat company. He opened a retail meat market on Kearsley Street in Downtown Flint, producing sausage products on the second floor. By the mid-1930s, Albert had built up enough business to construct a plant in Downtown Flint (where UM-Flint is today) for producing his meat products. He employed just a handful of workers at the time, but the business flourished and continued to grow. In 1972, Albert’s son, also named Albert (Al) built a new manufacturing plant located just off Bristol Road near Bishop International Airport, and Koegel’s took occupancy in January, 1972. Al’s son John has worked at the family business since the 1980s and took the reins about 15 years ago, along with his sister Kathryn, who is vice president. Al, who is now 87 years old and “not slowing down at all,” laughs John, continues to be involved and handles all the company’s financial matters.

So, just what makes these hot dogs and the other 34 Koegel Meat products taste so good? To find out, My City Magazine toured the 100,000-square-foot facility that employs approximately 90 people on two shifts. After donning white coats and hairnets and removing our jewelry, MCM photographer Mike Naddeo and I entered the factory with John as our tour guide. Tours are rarely given as utmost care is taken with sanitation to avoid any product contamination, says John. On that day alone, there were 180,000 skinless beef hot dogs, 160,000 Vienna hot dogs and 20,000 Coney dogs produced for retail sale, to name just a few. “Koegel’s is known for its natural flavoring and natural casing,” says John, “and the Viennas are all hand done.”

Our tour was conducted in reverse, beginning in the shipping area and ending in the kitchen. A unique aspect of Koegel Meats is that they deliver their products to each individual retailer, explained John. Delivering to each store allows Koegel to place a shorter shelf life on its products. “We do everything we can to provide our customers with the freshest products possible,” boasts John. Koegel Meats is a cool place to work, literally, as 70,000 square feet of the facility is refrigerated. The employees were very busy during our May visit, as Mother’s Day is the official kickoff of the plant’s busy season. “Summer is a huge time for Koegel!” John exclaimed. About 35 different products including frankfurters, lunch meats, ring bologna, bratwurst and Polish sausage are sold in five states, including Ohio, Indiana, Kentucky, Illinois and Michigan. In addition, Koegel has partnered with Lynch Shipping so that consumers can purchase online at koegelmeats.com.

In the packaging area, Koegel products are bagged and vacuum-sealed. A hands-off operation, one machine can package 600 franks in a minute. To allow for a three-hour buffer in the manufacturing process, products are stored in a holding cooler. We were shown a room piled high with huge bags of various spices, as well as a tank of vinegar, which is a key ingredient in their pickled bologna. Another area contains the top-quality beef and pork used in the recipes. In the smoke/steam area, John explained how smoke from hardwood sawdust is pumped into the smokehouse for about 90 minutes, after which the meats go through a steaming process.

John Koegel attributes the company’s success to its hardworking employees, some with tenures of up to 40 years. Production is done on the first shift by the majority of the staff and a small second shift is responsible for sanitation procedures. During the summer months, students from various colleges are hired to keep up with increased demand for Koegel products. The company is also appreciative of its loyal customers. “We are so thankful for the support we have received from the people in Flint over so many years,” says John. “We enjoy pleasing the people who appreciate the value and quality of Koegel Meats!” 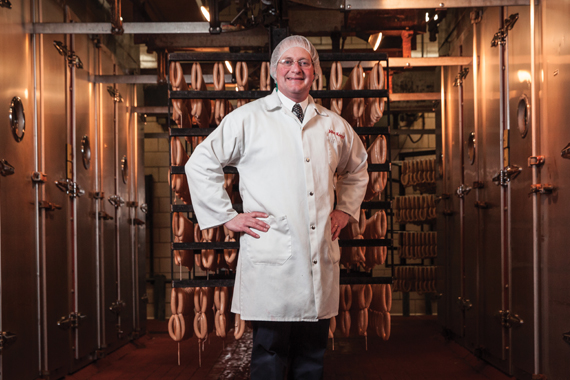 See more photos HERE, or purchase photos from this story by going HERE and selecting the “Koegel’s” category.