When Rob Coheen accompanied his friend, Charlie Sheridan, as a guest to a meeting of the Retired Men’s Fellowship of Greater Flint (RMFGF), he was intrigued. After his next couple of visits, he was hooked. “For me, it was the fellowship aspect of the group,” he says, “then afterward, meeting for lunch at the Masonic Temple or the White Horse. Lunch is always a highpoint of my day; there is something about breaking bread with folks.” Five years after his first meeting, Coheen is an active member of the group, taking the role of monthly program chair this January and working as a kind of group historian looking into its past while at the same time, contemplating its future. 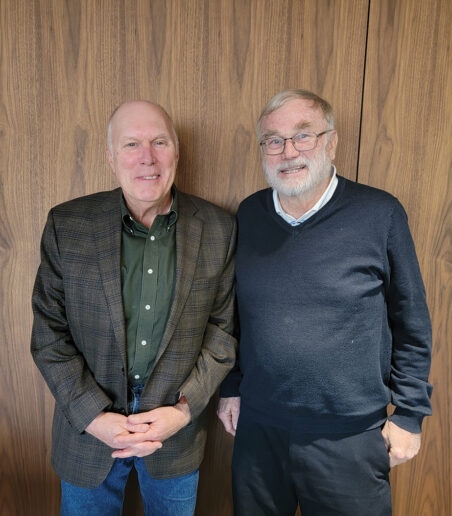 Initially called the “Older Person’s Group,” the RMFGF was founded in 1963 by James Mayfield as a way to promote the Flint YMCA to older men of the community. It soon became a way for men to expand their horizons with other fellows of like mind and humor. The preamble to the group’s constitution states: “Believing that life is a great adventure, [and]to live it happily and usefully a broad culture is necessary. We, therefore, unite ourselves into a club for mental improvement, physical well-being and good use of leisure time.”

The first ever meeting took place on January 7, 1963 and the group became an instant success, charting members from all walks of life, backgrounds, interests and experiences. Many years (and many name changes) later, the RMFGF is approaching over 2,100 meetings for fellowship, education and adventure. The RMFGF also provides additional benefits not initially planned. According to Coheen, “The RMFGF provides and expands a social network that changes when a person retires. We offer mutual support, friendship and a sense of purpose through community engagement.” Today, the RMFGF boasts a membership of nearly 100 men of ages ranging from 57 to 102 and on January 7, will acknowledge its 60th anniversary with a big blowout extravaganza to be held in May. “It just goes to show the sustainability and our ability to adapt to modern times,” says Coheen. “The club has shown that it has the quality of persistence.”

The preamble to the group’s constitution states: “Believing that life is a great adventure, [and]to live it happily and usefully a broad culture is necessary. We, therefore, unite ourselves into a club for mental improvement, physical well-being and good use of leisure time.”

As evidence of that persistence, the club has weathered a bevy of challenges over the years, possibly none bigger than the pandemic lockdown and quarantine, when the physical meetings were abandoned. “We started using the Zoom platform,” says former president and current Zoom Host, Tom Cerny. “I believe we had between 30-37 members at our first virtual meeting.” The virtual attendees grew meeting by meeting, even though most members came of age before the era of personal computing. In fact, the group’s three oldest members, age 100, were all in virtual attendance by Thanksgiving 2020. The decision to go virtual also offered unexpected opportunities. Presenters could come from and speak from anywhere on the globe, home-bound or hospital-bound members could easily attend, “snowbirds’’ and travelers could attend remotely from their locations, and members who were unknown to each other could meet for the first time. When the pandemic subsided and in-person meetings could resume, the RMFGF continued using the virtual meeting format and currently offers a hybrid experience.

Official meetings take place at 9am every Monday from September to May in the Flint Institute of Music’s (FIM) Anderson Room. The time is structured with the first hour devoted to fellowship and conversation. The official meeting is called to order at 10am, followed by the Pledge of Allegiance, health updates, reading of the previous meeting minutes and an attendance report. On the first Monday of each month, the group makes it a point to acknowledge any birthdays or major member news. At 10:30, a formal professional and informative presentation is given by a guest speaker, followed by a Q&A session. The meeting officially ends at 11am; however, many remain to ask questions, engage in conversation and more.

“The RMFGF provides and expands a social network that changes when a person retires. We offer mutual support, friendship and a sense of purpose through community engagement.”

The “Famous” RMFGF ballpoint pen is one of the most sought after prizes in Genesee County!

Former RMFGF president Tom Cerny has been attending meetings for 18 years. “I was brought to my first meeting by a friend from church,” says Cerny. “I was hooked by two things: One was the friendships I made and the second was the engaging programs/presentations.” Presentations are given by professionals from all areas of interest including archeology, history, science, engineering, sports, medicine, art and others. The group has hosted war veterans, writers, coaches, business executives and local professionals including Sheriff Chris Swanson, Dr. Bobby Mukkamala, Coach Tom Alward, and Dr. Tracee Glab of the Flint Institute of Arts. Presenters are not compensated but are instead presented with the “famous” RMFGF ballpoint pen, and a certificate of appreciation.

As a way to make an even bigger impact in the community, the RMFGF has helped the North End Soup Kitchen since 1990 by donating food and funds totaling nearly $60,000 to date.

Always evolving, the club is constantly on the lookout for new members and hopes to continue growing in the future, whatever it may hold. “The group is open to anyone in retirement or semi-retirement who shares the common goal of staying engaged with the world and enjoying the company of like-minded people,” explains Cerny. The RMFGF members come from all walks of life and backgrounds and each is accepted as a valued and contributing part of the group. “We respect each other for who we are,” he adds. Joining is easy: simply attend a meeting via Zoom or in person at the FIM and then speak to any member to connect with the proper individual. Annual dues are $25 – a bargain for good times with good people. Although they are a men’s club, they would like it known that women are welcome to attend any meeting if they are interested in the presentation topic or wish to accompany a member. Those interested but not yet retired may join as an associate member.

“The group is open to anyone in retirement or semi-retirement who shares the common goal of staying engaged with the world and enjoying the company of like-minded people.”

If you want to enjoy the great adventure with like minds and good people, consider joining the Retired Men’s Fellowship of Greater Flint. Come as a guest and stay for the friendships.

For more information, including a list of future and past presenters, visit retiredmensfellowship.org.

Congratulations to the Retired Men’s Fellowship of Greater Flint for 60 wonderful years of adventure and friendship!