In the past couple of years, the UM-Flint Engineering program has doubled and has grown exponentially, according to John O’Brien, Engineering Technician in the new design space that opened last winter to support the progress. O’Brien works alongside fellow engineering technician, Greg Keller, and says “we are a team and anything the professors or students need help with in the design space or on any of the machines, we do it. We make sure everything here runs smoothly for them.”

That means maintaining all of the exciting new machinery including 3D printers, solar equipment, a wind tunnel, CNC Mills and a CNC lathe (Computer Numerical Control), among others. The space is shared by students and professors alike. “During the school year, there are always at least eight students in here and up to 40 – it gets pretty busy,” O’Brien says. The students are working on a large variety of projects, from the first class in which they learn to operate all of the equipment, to their senior capstone projects. 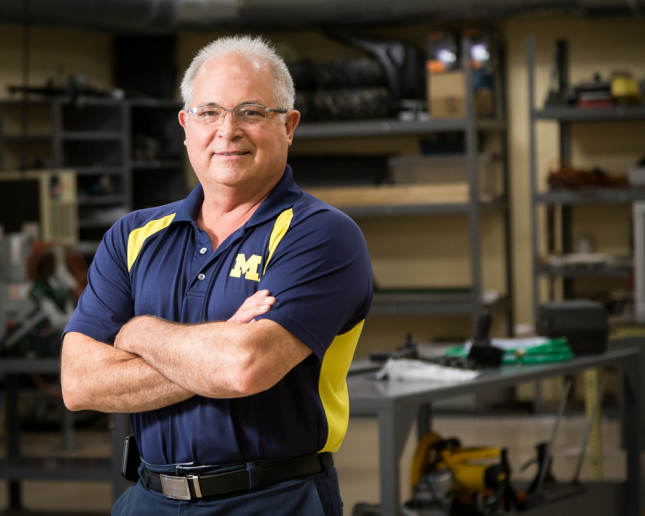 Final projects are displayed throughout the new workspace, most bearing the group members’ names handwritten in black marker. Some of the projects include a machine capable of throwing a football across the room, a robot that can putt a golf ball and throw a tennis ball, and the very practical solar-powered hot dog roaster. O’Brien explains, “The students come up with ideas and submit them to the professor, who then chooses from those projects and divides the graduating class into groups. And although the students might think they’ll get to work with their friends, the professor sets up the groups to be as diverse as possible.” This helps create a more engaging and challenging experience. In this way, the senior projects are great experiences both in engineering and as an opportunity to work in a diverse group, get to know their strengths and weaknesses, as well as how to adjust to become an asset to the team in order to achieve a common goal. Some students are great at building while others excel at the planning and paperwork side of engineering. “The folders for the projects are an inch or two thick by the time they’re done,” O’Brien says. 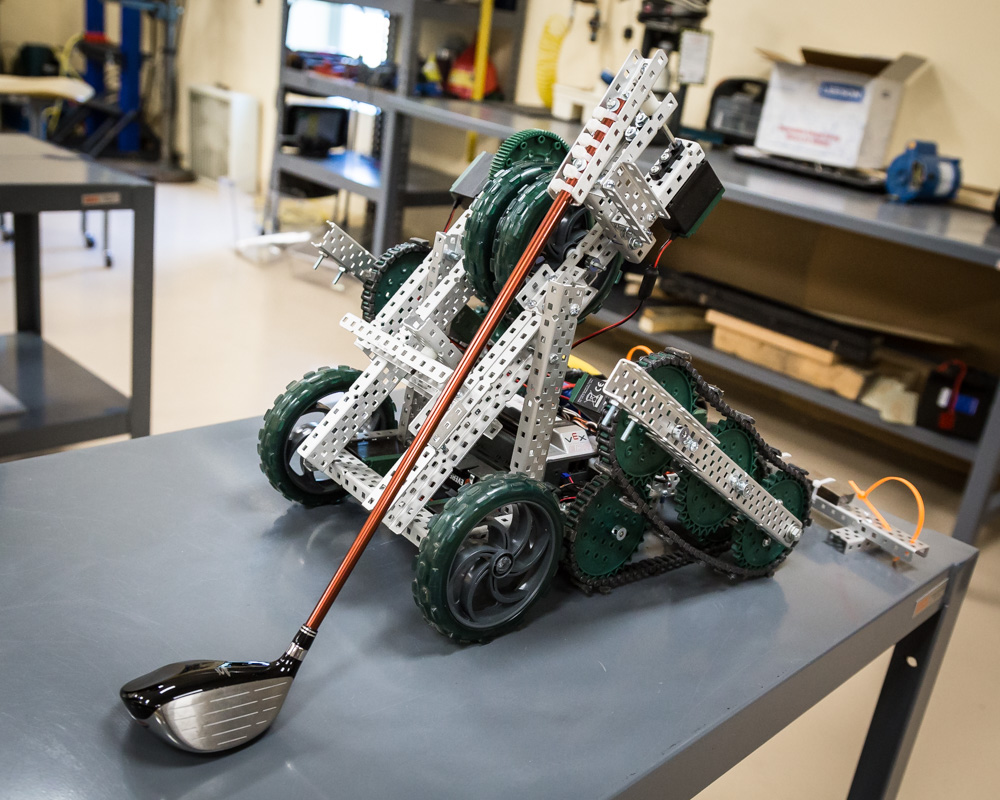 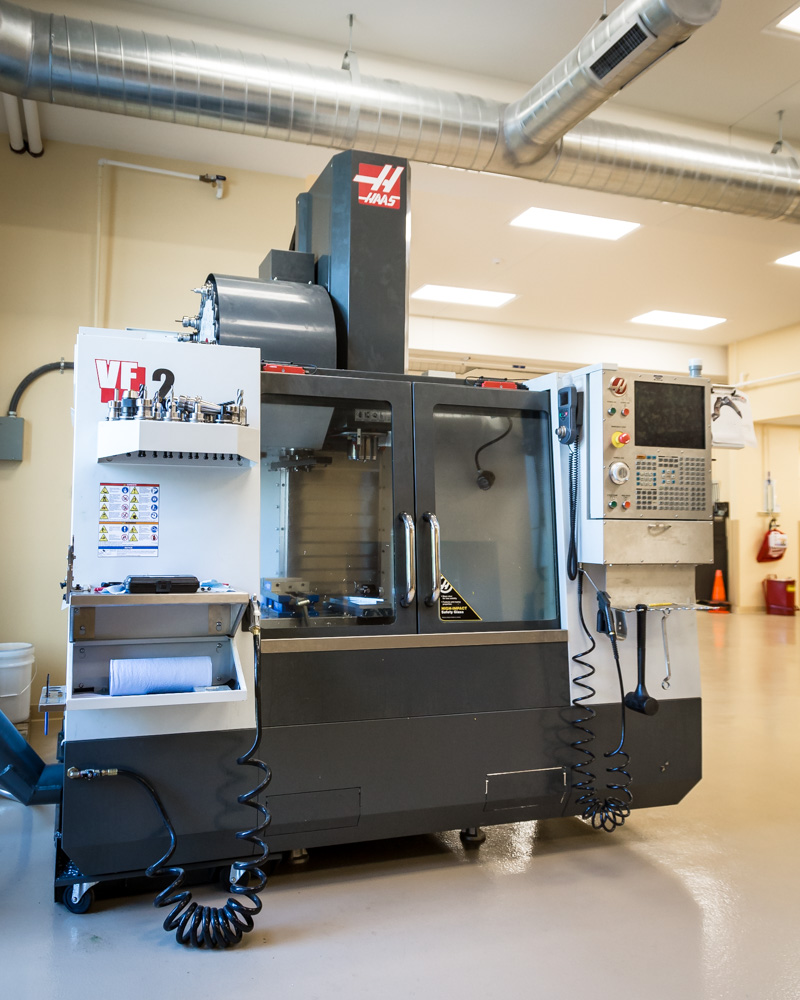 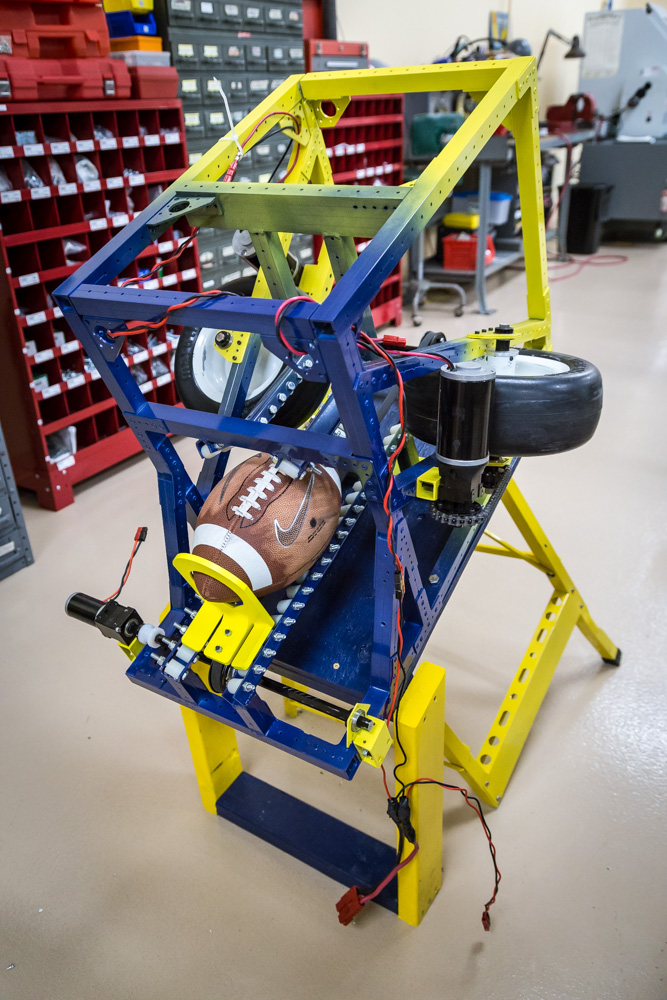 The UM-Flint Engineering Department has three active clubs: the American Society of Mechanical Engineers (ASME), Society of Automotive Engineers (SAE), and the Society of Women Engineers (SWE). The SAE club built “The Baja Racer” which they were able to take to New York and race.

Sometimes companies even approach the UM-Flint Engineering students to help with secret projects, giving them real-world experience in problem-solving for businesses. And, O’Brien explains, “each of the professors in the Engineering Department are working on projects. We are a research center for them.” For example, Dr. Mazumder is working on a research project using lasers to map out and study particles, O’Brien says. Another Professor, Mihai Burzo, Ph.D., is working with Toyota and Chrysler on a project to determine when a driver is falling asleep at the wheel before the person actually does fall asleep. O’Brien explains, “Professor Burzo also has a camera that takes a picture of your face, heats up the room and cools it down, asks you questions and can monitor your blood pressure, respiration rate, etc. to determine whether you are telling a lie. And, he says it has around an 80 percent accuracy rate.” O’Brien likes to consider the real-world applications of these types of research and is proud that it is going on at UM-Flint, in his hometown. 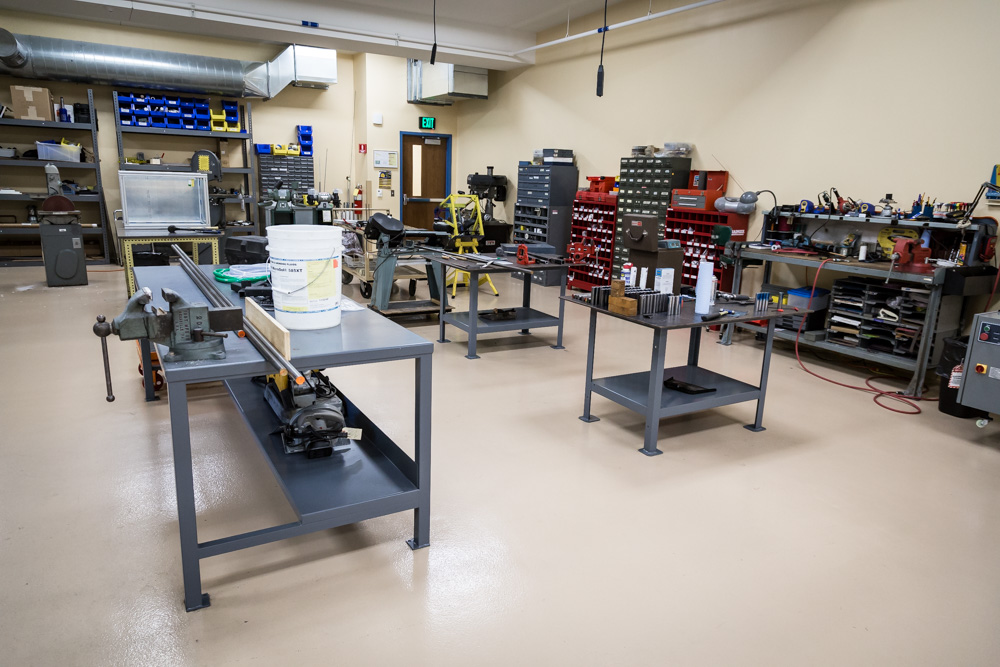 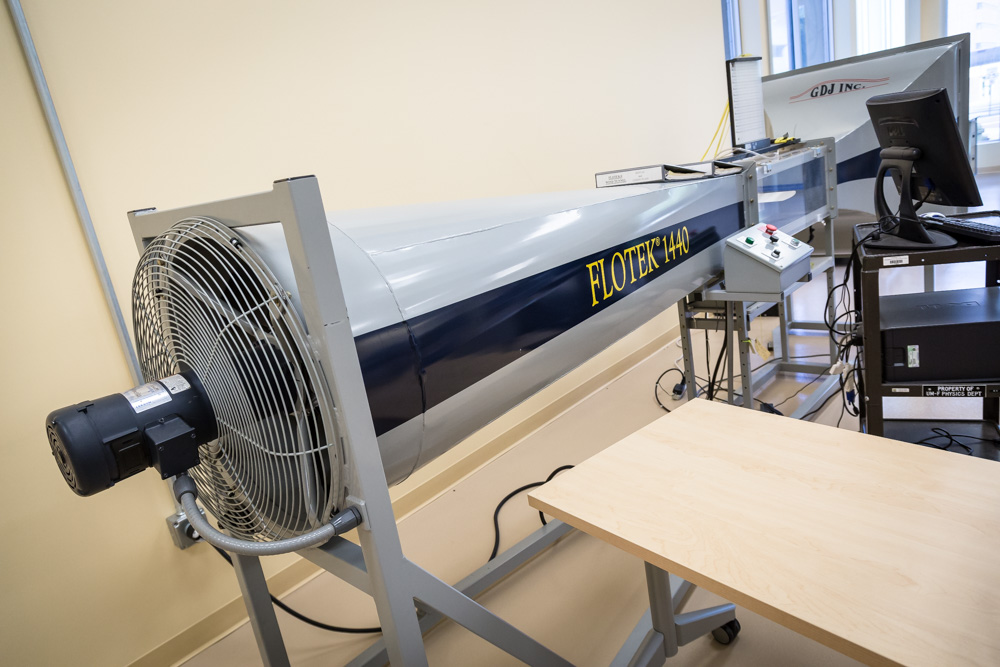 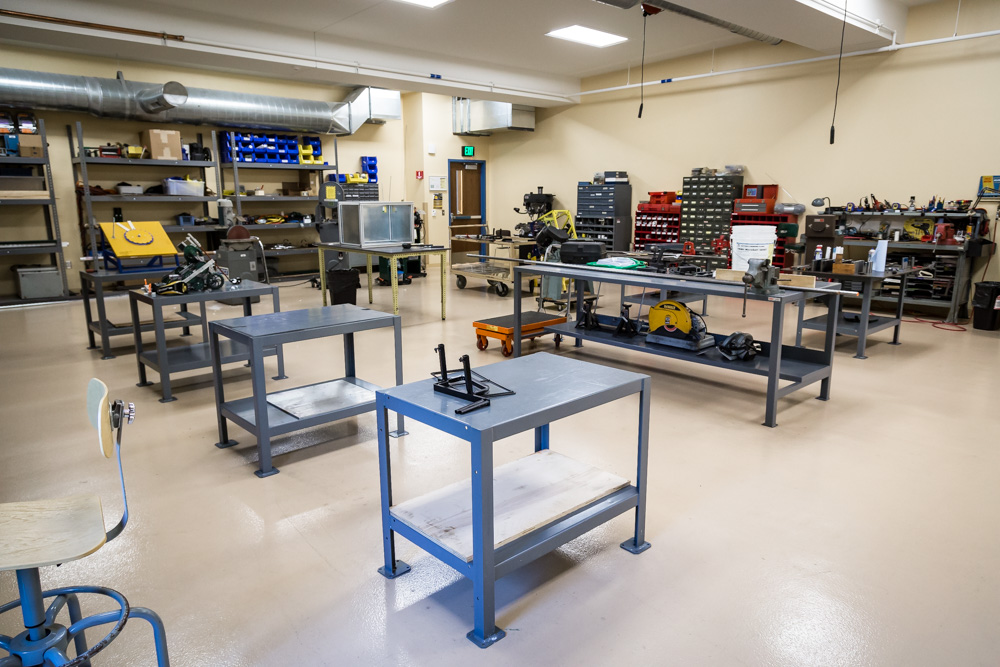 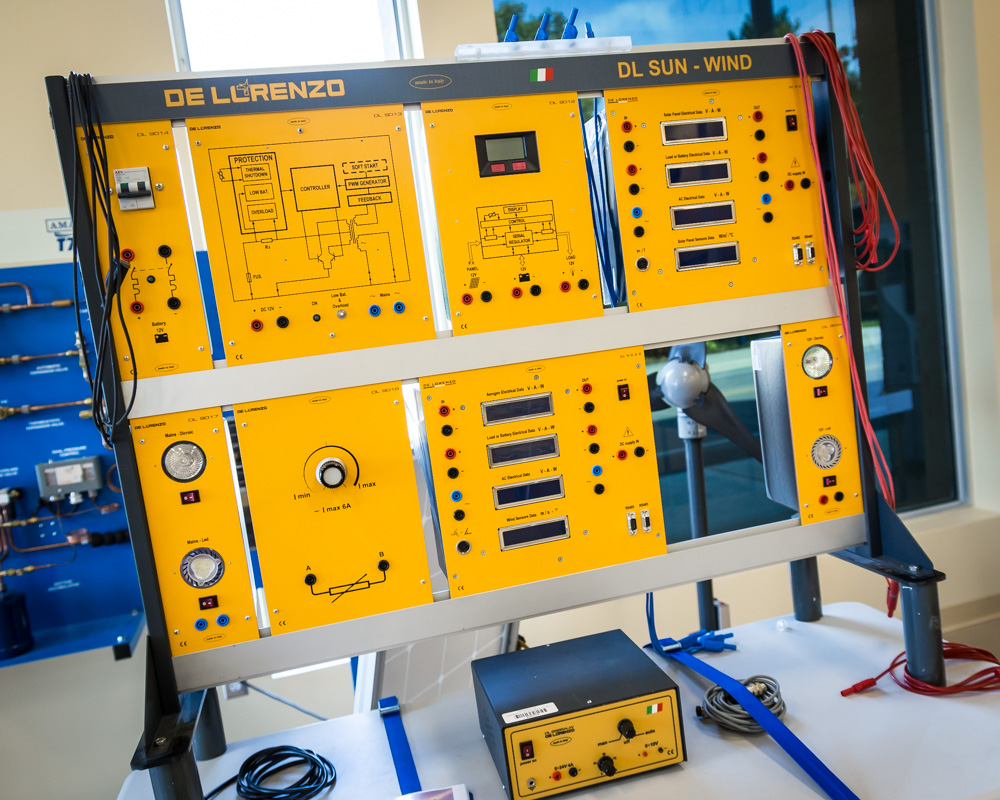 “I’ve been here my whole life,” O’Brien shares. “My dad graduated from General Motors Institute and worked at AC until he retired. I graduated from Eastern Michigan University and have a Bachelor’s degree in Industrial Technologies and a Journeyman’s Card for machine repair – I worked for Buick for 32 years.” He says that Greg Keller also has a long history in Flint and is curator of the Buick Museum. This team is excited about the new space, but it is only temporary. “They are going to build a new wing on the Murchie Science Building, that was recently approved by Governor Snyder,” O’Brien says. He explains that the current workspace was originally built for the theatre and dance departments and then given to Engineering for the projected two years it will take to build the new wing, and will then be returned to the theatre and dance departments.

“As soon as we get into the new building, we will get even more equipment, but for right now we are pretty well set,” O’Brien says. He encourages all of the students to get in the new space and build, to take advantage of the learning opportunities and also to participate with the professors on research projects, adding, “it is great experience for the student and for the professor, as well. It’s mutually beneficial.”