It was July 2, 2021 and the then-27-year-old Grand Blanc native was leading her first service as Rabbi of Temple Beth Torah in Fremont, CA, just north of San Jose.

“So friends, while we are waiting for everything to get up and running,” she began the Zoom-only event before pausing and waving. “Hi, this is Rabbi Zoe,” she continued. “We are going to do some singing to get us in the Shabbat mood.”

At first, some of those tuning in to the service sang along with McCoon as she began performing the hymn, Hine Ma Tov (“behold how good”), but many opted to simply listen to a voice most of them were hearing for the first time.

Then, a beaming McCoon stepped aside as then-Beth Torah President Rick Brodzinsky came to the microphone.

“We interviewed many wonderful candidates to become our new Rabbi and we are so honored that Rabbi Zoe McCoon chose us when we offered her the position,” he said. “It is now my great pleasure to introduce Rabbi Zoe to the congregation to lead us in prayer.”

McCoon began her tenure as the first female Rabbi in Beth Torah’s 60-year history at an ideal time as in-person services resumed a week later with an 80-minute outdoor event, featuring her voice and guitar playing throughout, next to the temple on a serene, northern California evening.

Thankful for the closer connection to her congregation, McCoon addressed the change in leadership and offered her unwavering support.

“As your Rabbi, I want you to know that I am here alongside you as we navigate the ‘new’ together,” she said. “Whether you want to talk about what you are going through or just want to feel supported by your community, Temple Beth Torah is here for you and I’m here for you. Let’s experience this new together.”

Then, as the sun began setting, McCoon became emotional when presented with her office nameplate.

“I’ve never had a nameplate before!,” she exclaimed while holding it.

McCoon had a similar reaction a month earlier when Brodzinsky greeted her after her flight landed with “the first sign anybody has ever held for me at an airport!”

“Leading services is something I have loved to do forever, which I developed growing up in the Flint area and attending Temple Beth El.”

“That was a really lovely setting and perfect atmosphere for my first in-person service, especially the sunset,” McCoon recalls. “Leading services is something I have loved to do forever, which I developed growing up in the Flint area (attending Temple Beth El), being so involved with the services and leading portions of them. I felt very comfortable during my first services here and really appreciated the immediate, warm reception of the congregation.”

That’s especially true when it comes to the musical portion. McCoon discovered a passion for singing while still a toddler before taking up guitar at age 18.

“One of my favorite things about in-person services again is the sing-along because hearing and singing melodies familiar to them can really bring a congregation together,” she says. “Seeing longtime members engaged in singing along with new faces is really beautiful.” 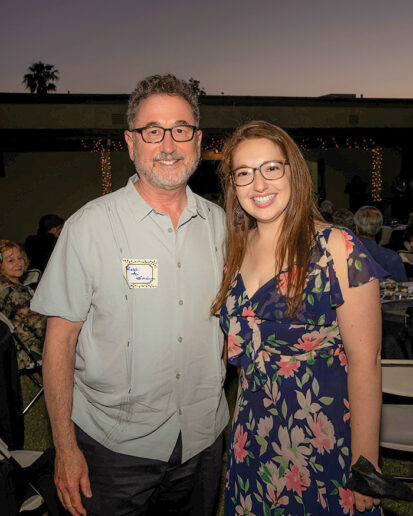 Among those taking in McCoon’s first services was former Beth Torah President Ronnie Petersohn, a member of its Rabbi search committee.

“I had watched the videos of Rabbi Zoe singing and her sermons and was excited to meet her,” she says. “She was enthusiastic and had delivered thoughtful and well-written sermons that we watched. Rabbi Zoe’s strengths are her compassion and the ability to connect with congregants of all ages. She has a beautiful voice which combined with her guitar skills have brought endless hours of music to a congregation that loves to sing.”

Some 17 months later, it’s clear McCoon’s enthusiasm for her new home has only grown.

“It’s going pretty well and I’ve only felt stronger about what a wonderful fit it’s been,” she says. “The first year of any position is about finding ways to meld with the partners you have to find a shared vision for the future. Then in year two, it’s finding what that vision looks like and how to implement it. I’ve also spent time seeing what our temple’s role is in the wider Jewish community of this area and making sure we are reaching out to anyone who might feel marginalized in our community.”

Describing a typical week for McCoon is impossible because there is no such thing.

In addition to preparing sermons and organizing services, she has a long list of other responsibilities when it comes to overseeing a synagogue with roughly 140 families, a preschool and youth and adult education.

McCoon, who excels in the teaching portion of her job, plays a role in all of Temple Beth Torah’s education services, working with people of all ages. She has also been part of a panel discussion of Bay-area professionals on reproductive rights and moderated a panel discussion about Jewish end-of-life planning.

McCoon has conceptualized and led presentations with titles like “Powerful Jewish Women in History” and “Each of Us is Made in the Image of God.” 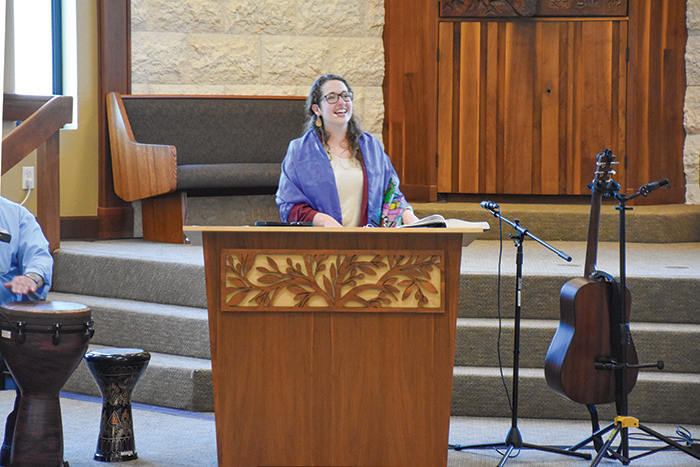 “A regular week does not exist for me because there are so many moving pieces to a Rabbi’s job,” she says. “I spend a good amount of time meeting individually with members and having meaningful conversations with our leaders about what we can accomplish together and what our role as a temple is with regard to what is going on in the world. Really, building relationships is at the core of everything we do.”

As search committee members expected, McCoon has proven a more-than-capable successor to experienced and accomplished Rabbi Avi Schulman, who was ordained in 1984 and had led Beth Torah since 2007.

“Rabbi Zoe is doing a wonderful job and it is not easy for a newly-ordained Rabbi to join a congregation that has had a well-loved Rabbi for a long time,” Ronnie Petersohn says. “She stepped into her role with an ease that would be difficult for even a more experienced Rabbi.”

Perhaps no one is more thrilled to see McCoon thriving as a Rabbi than her mother, Carol Raznik, who has a deep knowledge of Judaism and publicly reads from The Torah (Hebrew bible) in both English and Hebrew.

“Zoe is a warm and friendly person, making everyone feel welcome and comfortable in her congregational home,” she says. “Knowing that music makes people happy and brings them together as well as enhancing a prayer service, she incorporates it very well in her Sabbath services. Her sermons are very relevant.” 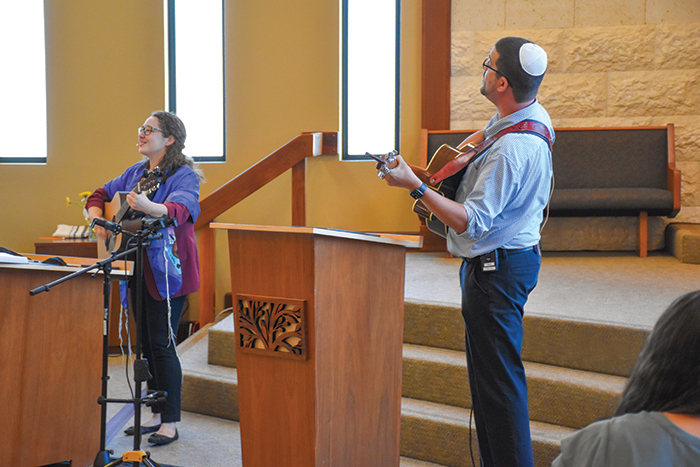 McCoon’s youth makes her a rarity among Rabbis. According to the career website Zippia.com, only four percent of American Rabbis are under 30 years of age and just 27% are women. That means only a small fraction of Rabbis in the United States are women in their 20s.

That McCoon is among them, however, is no surprise to many who witnessed her growth as she came of age at Flint’s Temple Beth El, like 82-year-old Micheal Melet, a lifelong member.

“My wife Kay and I both knew when Zoe was a very young girl that she was going to become a Rabbi,” he says. “We watched her observe, learn, lead, teach and sing unlike any of her peers. She was a born teacher and grasped and shared her Jewish knowledge at such an early age. She led our congregation in Shabbat services and read beautifully from our Torahs with a deep understanding and ability to articulate her thoughts.”

“My wife Kay and I both knew when Zoe was a very young girl that she was going to become a Rabbi. We watched her observe, learn, lead, teach and sing unlike any of her peers.”

Another female Rabbi, Karen Companez, who served Temple Beth El from 2002-15, first stirred McCoon’s thoughts of becoming one. Like most Jewish youth, McCoon was contemplating her future around the time of her bat mitzvah at age 13.

“I started thinking about several career paths I might take, but none of them quite made sense for me and then, Rabbi Karen asked if I had considered becoming a Rabbi,” McCoon remembers. “It blew my mind.”

In that moment, McCoon realized there was a career she would love and began preparing for it almost immediately.

In high school, McCoon became the religious and cultural vice president of a regional chapter of the National Federation of Temple Youth. She also founded LeGit, an acronym for Genesee County Interfaith Teens, an organization of high school students of various religions, ethnicities and backgrounds.

“Zoe’s leadership roles, her love of Judaism and her singing voice of an angel are why I feel she was able to become a Rabbi at such a young age, along with her outgoing personality,” says Nancy Epstein, who became friends with McCoon while both attended Temple Beth El.

After graduating among Grand Blanc’s Top Ten Class of 2012 students with a 4.183 grade point average, she was still nearly a decade away from realizing her dream.

In 2016, McCoon began five years of rabbinical studies at Hebrew Union College–Jewish Institute of Religion in Cincinnati, spending her first year in Jerusalem. During her time at HUC, McCoon served as the solo student rabbi at temples in Marquette and Bay City, as well as an educator and musician at I.M. Wise Temple in Cincinnati.

McCoon began her job search in early 2021 and landed several interviews. Due to rules of the Jewish religion, McCoon could not be offered a position any earlier than 8am (Pacific time) on March 2.

She waited less than a minute for her phone to ring as Beth Torah search committee member Sharon Sacks promptly called her at that time and McCoon immediately accepted. At 8:07, an exuberant Sacks sent a message to other search community members which read like this: “She said YES!!!!”.

“Rabbi Zoe’s strengths are her compassion and the ability to connect with congregants of all ages. She has a beautiful voice which combined with her guitar skills have brought endless hours of music to a congregation that loves to sing.“

Even someone with the positive personality of McCoon has been shaken by recent instances of antisemitism like rapper Kanye West’s anti-Jewish rants on social media, NBA All-Star Kyrie Irving’s re-tweeting of a Holocaust-denying article and comedian Dave Chappelle’s “Saturday Night Live” monologue during which he seemed to downplay fears of antisemitism and suggested West should be more subtle about his views.

Much closer to home, a maintenance worker found a swastika drawn on one of Beth Torah’s outside walls just a month before McCoon accepted the position.

“Some people think that just because the Holocaust is in the past, so is antisemitism, but that’s just not accurate,” she says. “There are Jewish people around the country afraid for their lives and concerned about what clothing or jewelry they should wear or which places they should not go. Some people think it’s just a Tweet, drawing or comedian’s monologue, but those things can spur more dangerous actions.

Addressing antisemitism is one of the many things McCoon will be doing as she builds her faith-filled career during the coming years.

“Zoe has always been passionate about helping people, being inclusive, collaborating with others and making the world a better place,” her mother says. “As a Rabbi, she has integrated these things into practice. I couldn’t be prouder of the job that Zoe is doing and it seems as though she is well-loved by her congregation.”