When Vedant Gupta holds up the golden mic and asks his first question, he is doing more than conducting an interview with an idol or celebrity. He is proving a point. “What I do doesn’t make me any different from anyone else,” he says. “I want everyone to know that any kid can do this. In this day and age, it is not possible to be without a platform to prove what you can do. Just get started and make it happen.”

At 16 years of age, Vedant Gupta is the founder and president of Global Kid Media – a company and platform created with the purpose to “motivate kids to succeed early in life and convince kids/parents/society that the conventional way of waiting doesn’t have to be a box we resign to.” During the five years since launching his venture, Vedant has proven his point time and again, conducting over 1,500 interviews, hosting over 300 virtual shows and appearing as a guest on multiple talk shows and newscasts. He has spoken to professional athletes, coaches, broadcasters, actors, executives and politicians. His impressive list of interviewees includes Jack Nicklaus, Lou Whitaker, Alan Trammell, Magic Johnson, Deion Sanders, Patrick Mahomes, Kurt Warner, Coach Mike Krzyzewski, Snoop Dogg and hundreds more. His list also includes numerous local legends such as Terry Crews, Mark Ingram Jr., Coach Tom Izzo, Coach John Beilein, Brandon Carr, boxer Anthony Dirrell, and Miles Bridges, to name a few. His work, coupled with his high school education and extracurriculars, makes for long nights and tired days – but for him it’s just part of the mission. “If I can get an interview, it makes it worth the effort,” he shares. 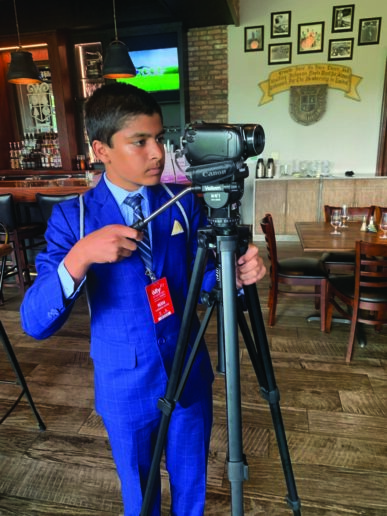 Setting up the perfect camera angle for his next interview.

When he founded Global Kid Media, Vedant was a sixth-grader in Grand Blanc. “We were looking for a way to supplement his education by learning skills through life lessons,” says his father, Vipul. “We always thought outside the box in terms of education. Vedant expressed interest in entering a competition he saw in Sports Illustrated for Kids magazine to become a kid reporter.” The applicants were asked to interview one person and Vedant and his father thought that most kids would interview a local athlete or family member. They decided to go bigger. “That year, the NCAA tournament was taking place in Detroit and we thought that we should go and try to cover the event,” Vedant explains. They were able to get access to press conferences, conduct interviews and more. Sports Illustrated for Kids couldn’t believe that Vedant got such great access and they denied him the chance to become a Sports Illustrated reporter. “It turned out to be the best thing that could’ve happened,” Vipul states. It was at that moment when he and Vedant decided to start Global Kid Media.

“In this day and age, it is not possible to be without a platform to prove what you can do. Just get started and make it happen.”

Once started, Global Kid Media couldn’t be stopped. Vedant and Vipul traveled all across the country including Hawaii to cover events such as the Pro Bowl, NASCAR Consumers Energy 400, NFL Training Camps and others. Each one offers numerous opportunities and just as many challenges, including the biggest challenge of gaining access. “I’m often denied access due to my age,” says Vedant. “Even when we are given access, we have trouble. I’ve had my phone confiscated by security and have been denied entrance to press conferences. Sometimes, we have to do it the hard way.” The hard way, as Vedant puts it, involves miles of patience and fortitude. “We have stood outside in the rain and the cold many times, just for a chance to speak with someone,” adds Vipul. While covering an NBA game, Vedant recalls how he succeeded in getting an interview with Milwaukee Bucks star Giannis Antetokounmpo. “We were in Atlanta covering the National College Football semifinal between LSU and Oklahoma and we found out that there was an NBA game in town. We went hotel to hotel trying to find where the teams were staying,” he continues. “Eventually, we learned where Milwaukee was staying and when we got there and entered the elevator, we ran into an associate of Giannis. Sometime later, we were able to conduct the interview.” Vedant has also shown the ability to be flexible and creative when needed. During the pandemic, he kept Global Kid Media rolling by hosting his own virtual show featuring guests such as JJ Redick, Nate Burleson, quarterback Mark Sanchez, and others. 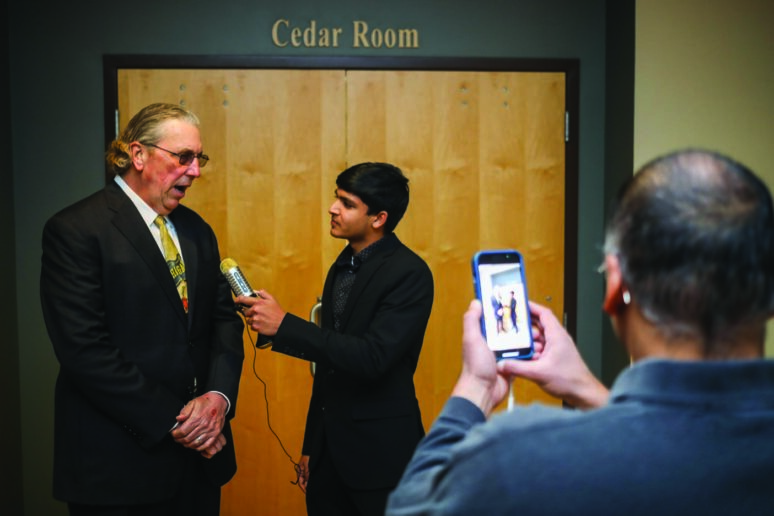 Photo by Katy Kildee | Vedant at the recent Greater Flint area sports hall of fame induction ceremony conducting an interview while being recorded for social media by father, vipul.

Nearly all interviews have been memorable, but the one that stands out the most to both father and son didn’t involve a celebrity at all. “We were interviewing athletes in the Special Olympics,” says Vedant. “I was 12 at the time and the kids we talked to there were some of the best interviews I’ve ever had. There’s no contest.”

After conducting so many interviews, you can say that Vedant is a veteran. For him, nowadays, it’s become a normal thing. “It isn’t an issue of being nervous,” he says. “I don’t feel like I’m out of my element. Everyone I talk to is a normal person and I strive to have a normal conversation.”

“He is much more confident now,” says Vipul. “He researches hours beforehand and he surprises me because he always says something very experienced. He says really mature things. I am most proud of his confidence.”

“When I am interviewing someone,” Vedant explains, “I always try to ask a unique question – something the person doesn’t always hear that is of interest to my audience. I also try to make it fun. My father always says if I didn’t make them smile, then I didn’t do a good interview.” One of Vedant’s signature tactics is to “flip” the interview and allow the subject to ask the questions, which makes for some extremely amusing interactions. 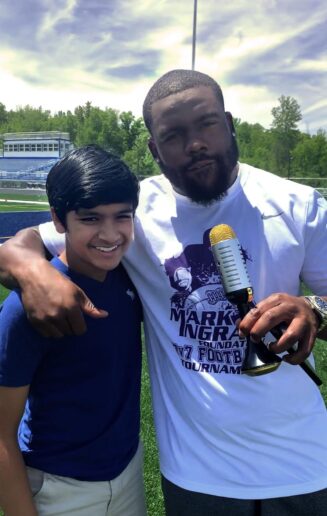 Vedant has a soft spot for Greater Flint natives and loves talking with local celebrities such as Mark Ingram II.

After all this experience with a microphone, some may be surprised to find out that Vedant doesn’t have any future plans to become a journalist or correspondent. “He would like to become an entrepreneur,” says Vipul. “It makes me proud to see how he is building his brand and the business side of Global Kid Media.” Vedant is looking at business schools around the country to attend after he graduates from Grand Blanc High School.

“With Global Kid Media, we were able to build more than 50 partnerships with businesses around the country and it’s something that I enjoyed doing,” Vedant adds. A member of the Grand Blanc varsity basketball and football teams, he also hopes to continue with a future in sports, if possible. As far as Global Kid Media is concerned, he wants to turn it into something bigger. “I would like to get other kids involved in it,” he remarks. “I want it to be a platform for kids to take the next step. Maybe an eight-year-old can have his own art show or an 11-year-old can host his own cooking show. I’m not sure what it will be in the next couple of years, but I do know that I want it to continue and evolve.”

His experiences in media over the past five years has taught Vedant the skills of perseverance, ingenuity, management and branding. It has instilled in him the confidence and belief in himself to make a difference in the world. It has also given him a lifetime of stories that he has been busy compiling for a book, currently untitled, that is due to be released in the near future. 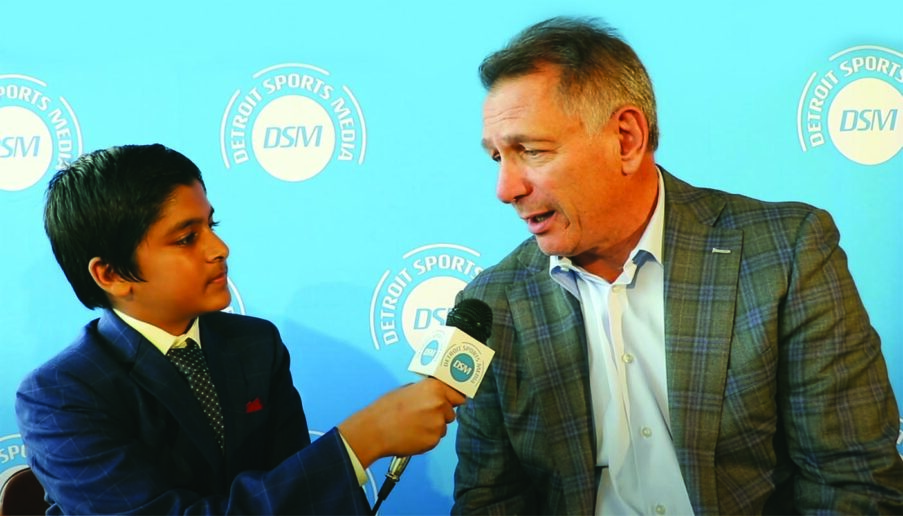 The mission of Global Kid Media was to prove that kids can follow their dreams and achieve anything they put their minds to and work for. “I’m a normal kid and not special in any way,” explains Vedant. “My main advice is to start. Just do it! Sometimes, we think too much when instead, we just need to set a goal and start working towards it. Do the work now while you have the time and opportunities will come running at you.”

In their quest to provide the very best media coverage for kids, Global Kid Media is also looking for media coverage sponsors and business partners. If you support the message and are interested in what Global Kid Media has to offer, visit globalkidmedia.com for more information and please click on the “Contact” tab to fill out the form. Vedant Gupta is waiting to work with you!