Amid the sounds of dribbling and squeaking sneakers, Keno Davis, first-year coach of the second-year Flint United professional basketball team, outlined his vision for the program.

“Our biggest goals are giving these guys opportunities to move to the next level, put a great product on the court and give the Flint community another thing to rally around,” says Davis while keeping an eye on what was happening on the court during a third and final team tryout at Insight Health and Fitness Center in Flint last month. “I’ve always been a coach who has wanted to play a pro, uptempo style. I believe that’s not only the best way to win games, but it’s also what the fans like to watch and the way players like to play.”

Count Lance Adams among those players.

Although the final roster of 15 was not set to be finalized until the first week of February, the former International Academy of Flint standout is one of several area natives expected to return for a second season with the team which is part of The Basketball League.

“Last year was our building year and now, people really know who we are,” says Adams, an All-Region performer for Great Lakes Christian College in Lansing. “Everything is well-structured here and we did not always see that with other TBL teams we played last year. The staff is really on point with everything and we’ve seen guys get to the next level. It’s a good platform to better ourselves.”

Adams was referring to players like Jaire Grayer and Chris Barton.

Adams hopes to be among those taking the next step, but joining Flint United has already changed his life for the better.

After racking up 1,178 points and drilling 295 three-point field goals at GLCC from 2016-19, Adams remained at the school the next season, serving as a student assistant for the basketball team before seeking a place to resume his playing career.

He found one, but it was 5,800 miles away in the former Soviet republic of Armenia.

While playing there and missing the important people in his life, including a young son, Adams received an Instagram message which lifted his spirits almost immediately. It was from a member of Flint United’s management team, asking if Adams would be interested in joining the team for its inaugural season.

“I didn’t even know Flint was going to have a new team, but I did some research and it looked like an organization I wanted to be a part of,” Adams says. “It’s great to be home with my (three-year-old) son and close to family. Plus, I’m now working and coaching at International Academy. It’s a win-win situation.”

The situation has also been a win-win for Coach Davis, who was left pondering his next move after a nine-season run as Central Michigan University head coach ended last spring. 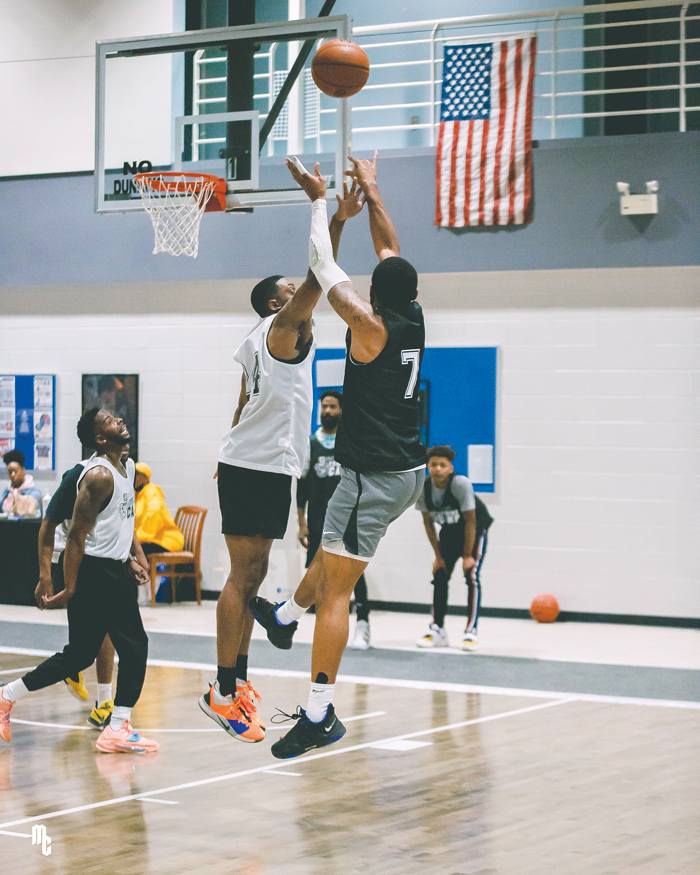 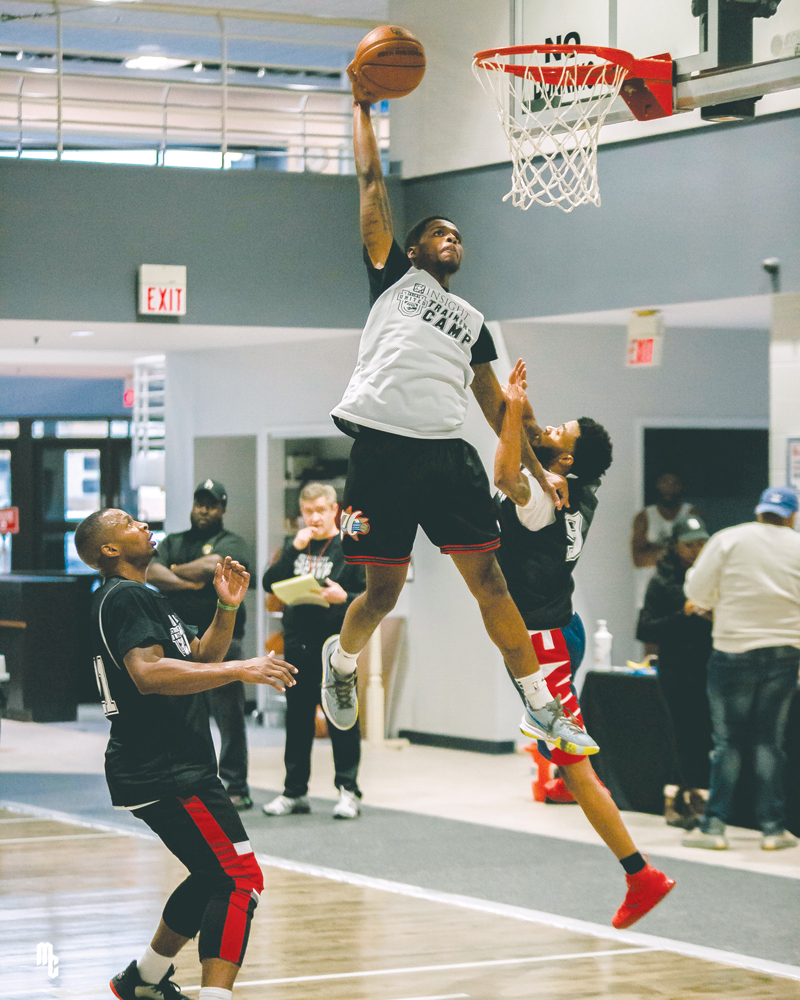 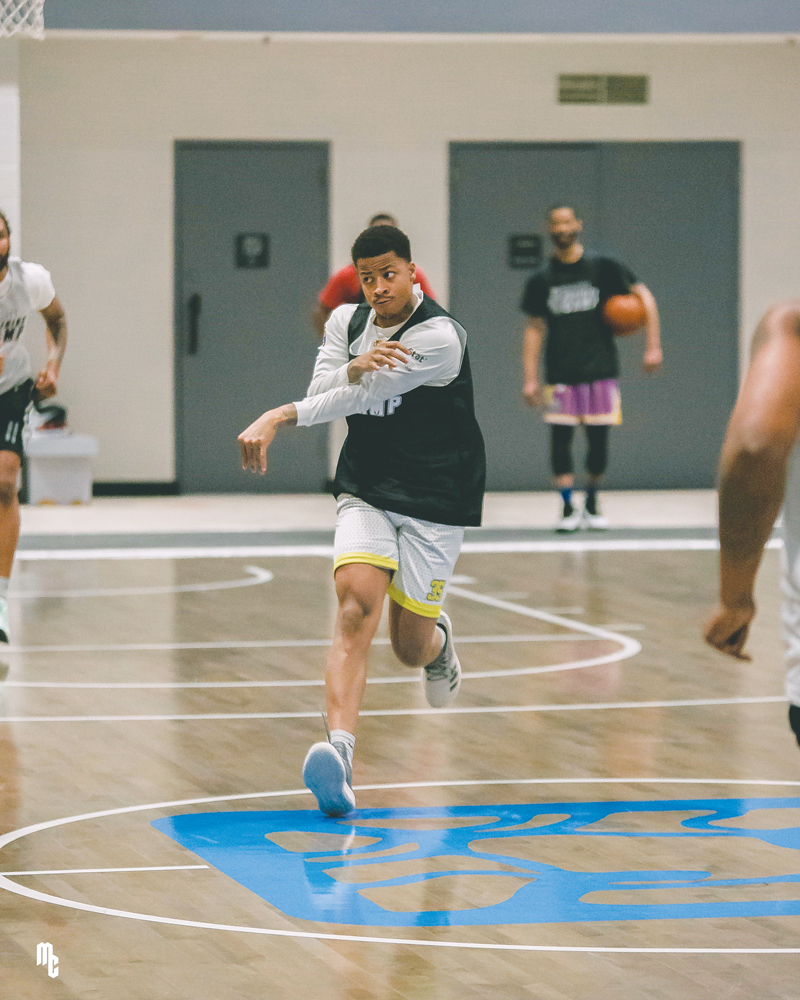 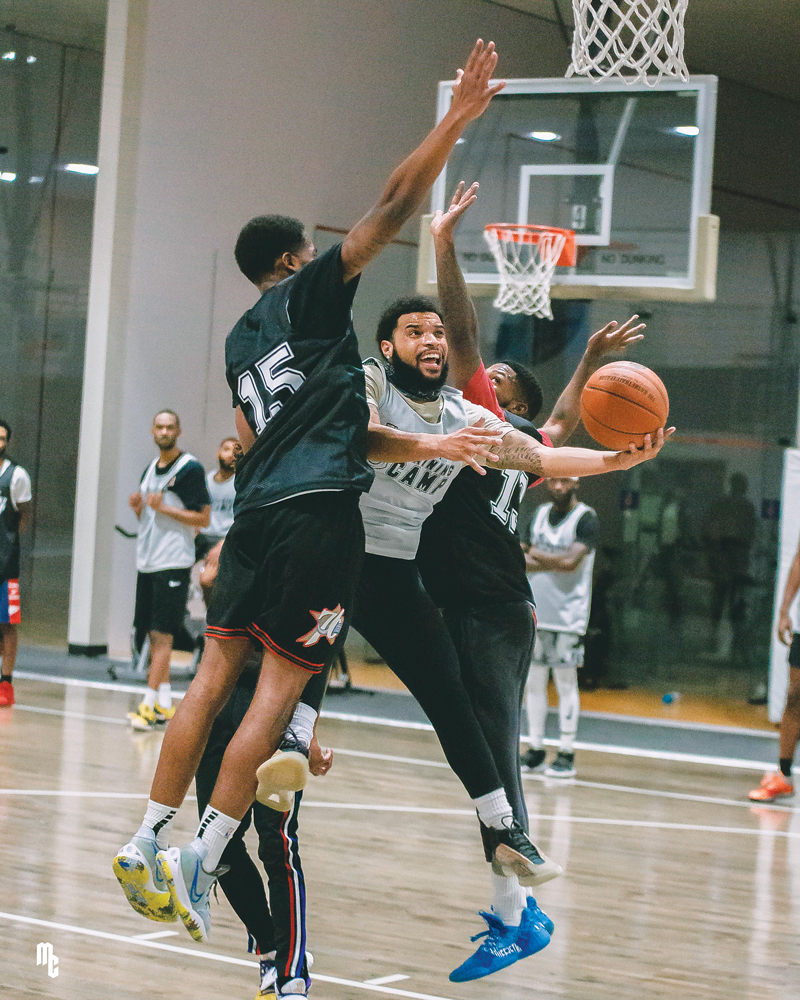 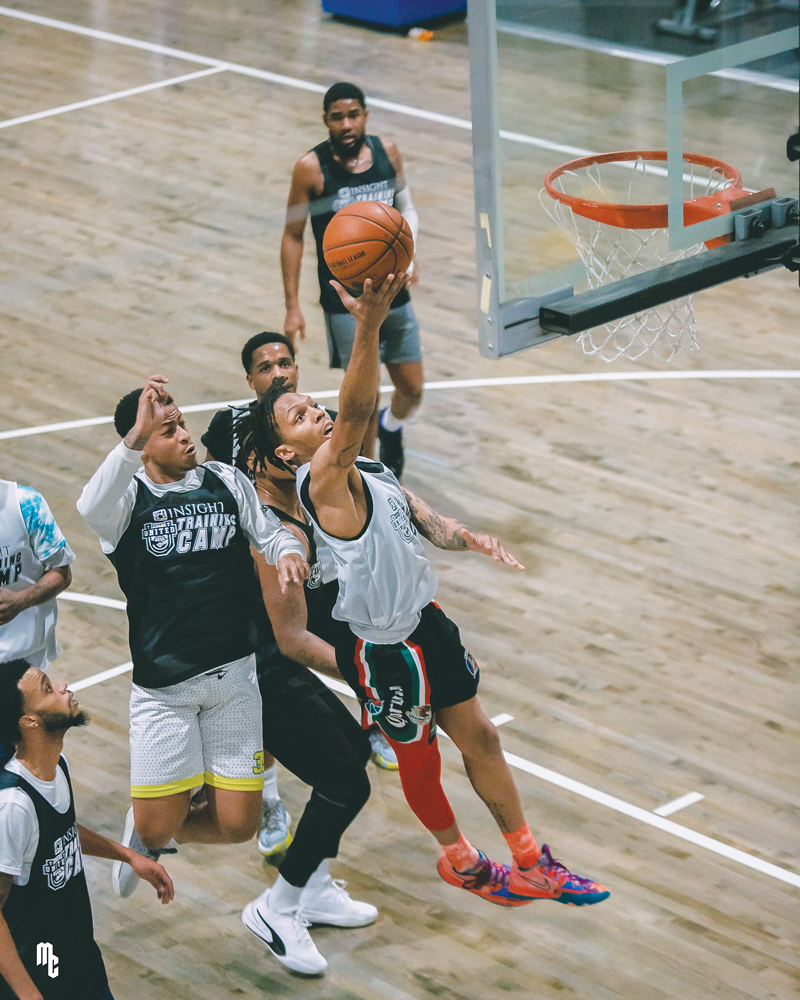 “Our biggest goals are giving these guys opportunities to move to the next level, put a great product on the court and give the Flint community another thing to rally around.”
Keno Davis

“I have stayed in touch with Kevin and other Central Michigan alumni, so he called me to gauge my interest in the job and it seemed like the right thing for me,” Davis says. “I could tell how excited Kevin is about the team and I was excited about the opportunity. I jumped right into it because the toughest thing for a coach is to not be coaching.”

Davis had coached in the college ranks every season but one beginning in 1991-92, including head coaching stints at Drake and Providence prior to joining the Chippewas.

He was introduced as the next Flint United coach in November 2021.

“I’m learning every day about coaching at this level, but, of course, I’ve always been a fan of the pro level and as a college coach, you are always trying to get your players opportunities at the next level and now I’m doing the same thing, personally,” he says. “I’ve been busy getting a sense of the type of players we will have through our tryouts and have been traveling to different areas, evaluating players who might be a good fit for Flint United.”

Davis laid the foundation for becoming a college head coach under the guidance of legendary mentors like his father, Tom, current Auburn coach Bruce Pearl and Gary Garner, who won an NCAA Division II National Championship at Fort Hays State in Kansas.

Keno Davis began his coaching career with a four-season stint as a student assistant on his father’s staff at Iowa from 1991-95. Over 32 seasons, Tom Davis was head coach of five Division I teams — Lafayette College, Boston College, Stanford, Iowa and Drake. He finished with a 598-355 record and ten NCAA Tournament appearances.

After graduating from the University of Iowa, Keno Davis spent two seasons (1995-97) under Pearl at Division II Southern Indiana. Pearl has since amassed a 385-193 record with Division I teams Wisconsin-Milwaukee, Tennessee and Auburn, including 11 NCAA Tournament berths.

From 1997-2003, Davis coached under Garner at Division II Southeast Missouri State before joining his father’s staff at Drake in the fall of 2003.

“I’ve learned so many things from coaches I’ve worked under,” Davis says. “I’ve been fortunate to have such a strong coaching background – from the things my dad taught me to Bruce Pearl with his uptempo style and Gary Garner has been important, as well. From them, I learned very fundamental things about what it takes to implement different styles of basketball.”

Davis’ father retired from coaching in 2007, handed the reins of Drake’s program to his son and enjoyed a front row seat for Keno’s smashing head coaching debut.

Drake finished the 2007-08 season 28-5, including the program’s first NCAA Tournament berth since 1971. Davis was named national Coach of the Year by six organizations including the Associated Press and Sporting News. 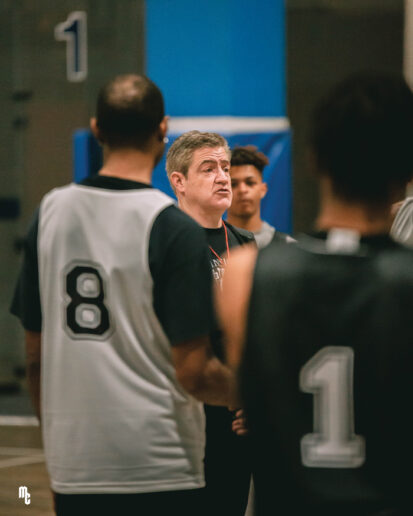 Kevin Mays, who also played football for CMU before graduating in 2012, is simply thankful Davis accepted his job offer. The two built a professional relationship when Mays served as Director of Fundraising and Development for CMU’s Chippewa Athletic Fund in 2015-16.

“Keno’s resume speaks for itself, especially once being named national Coach of the Year by so many media organizations,” Mays says. “He’s led highly successful programs on and off the court and provides great understanding and acumen of the game. Coach Davis knows how to identify, scout and develop talent.

To have a coach of his caliber is huge for Flint United and the city.”

Adds Lance Adams: “You can tell coach Davis will build great relationships with the players and community. We’re really looking forward to playing for him.”

Encouraged by the talent level he’s seen at tryouts, Davis is really looking forward to assembling the second edition of Flint United.

“The depth of this year’s team is going to be a strength and there is no doubt we’ll have 15 high-quality players,” he says. “Then, we’ll see who starts separating themselves to potentially be the next great talent coming out of Flint United. Overall, we want a team that spreads the court and has versatile players at all positions who can shoot three-pointers, but also attack off the dribble.”

Jones, a former Carman-Ainsworth star and Adams’ teammate at GLCC, was a two-time All-American, finishing with 1,400 career points. Reed is a former Mount Morris standout.

Davis was elated to finally be playing basketball in his hometown again after joining Flint United. He previously played for Oak Park High School, Northwood University and the TBL’s Detroit Hustle.

“Coming Back To Play For My Hometown Flint with Flint United!!,” Davis posted on Facebook prior to the start of last season. “All My Flint Fam Gonna Get A Chance To See Me.”

Davis poured in 25 points as Flint United edged his former team, 105-104, to conclude its first season. However, that left the team with just a 6-17 final record.

Adams is confident of a better record this season which begins March 4 with a home game against Kokomo United at Dort Financial Center.

“The brotherhood among teammates will be a big strength and the commitment of the guys is really strong,” he says. “We all want to come together and be a big part of something big.”

For more information or to purchase tickets, see flintunited.net.