Joel Bye of Swartz Creek is what some would call a “war buff.” His father, George Bye, was a pilot with the Mighty Eighth Air Force of Rattlesden, England during World War II from November 1943 until May 1944.

When Joel was 15 years old, he found a medal his father had received during the war, the Distinguished Flying Cross, which was awarded for extraordinary achievement while participating in aerial flight. Joel said to his father, “Wow. Now I know how you got it.” His father replied, “No, you don’t. I was the only guy left to pin it on.”

This was the first conversation about the war that Joel had with his father, who was very reluctant to talk about it. 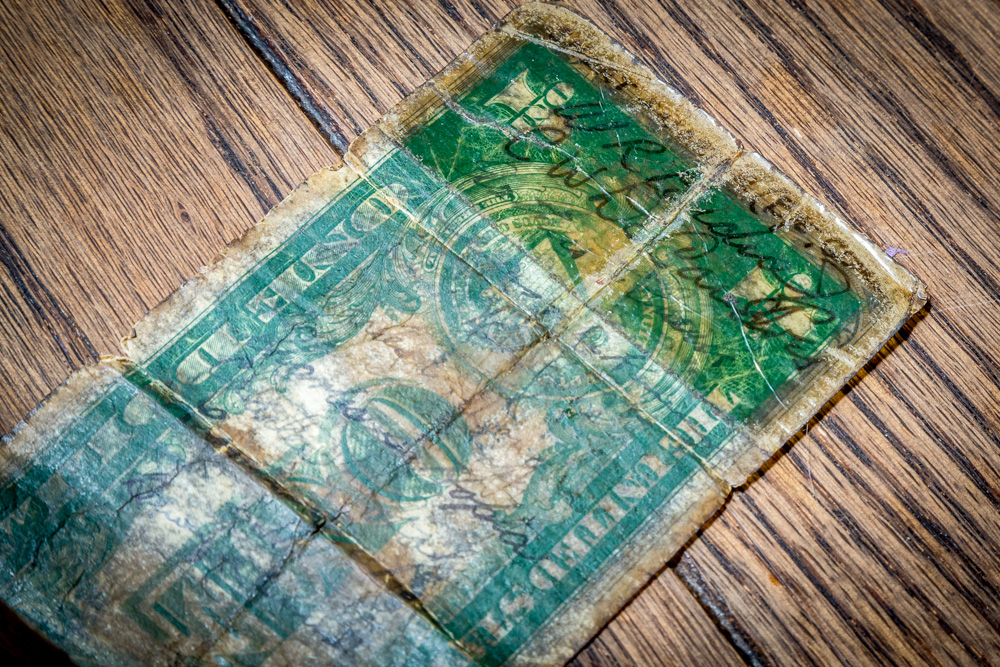 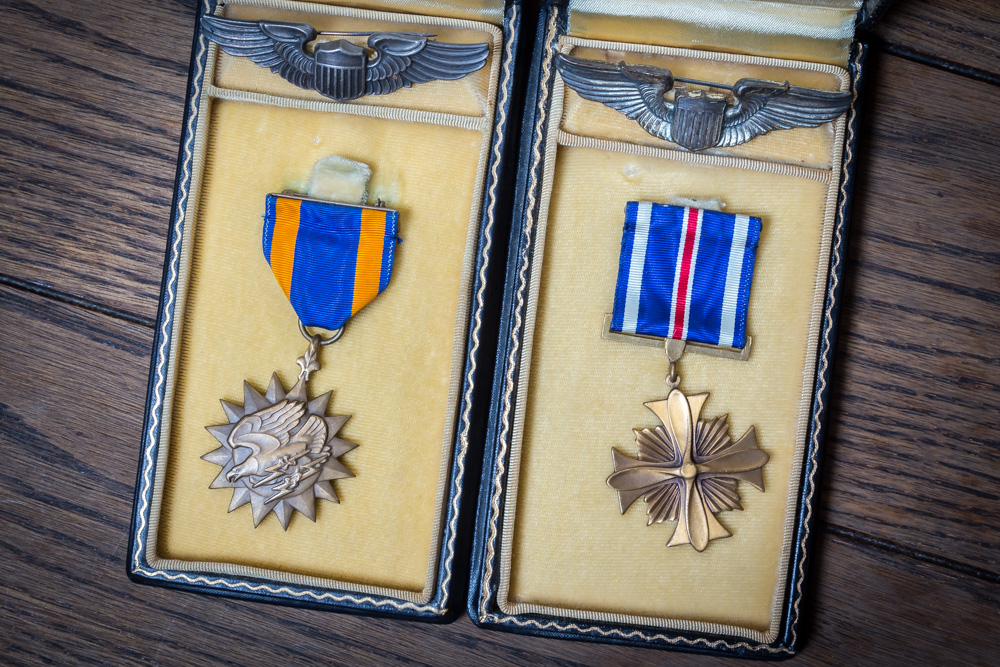 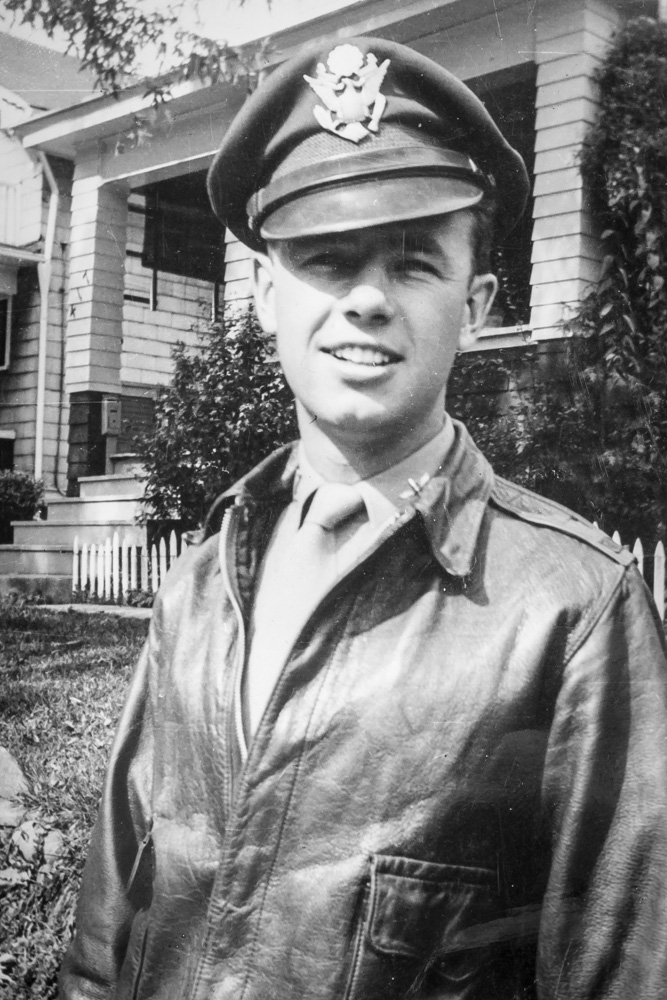 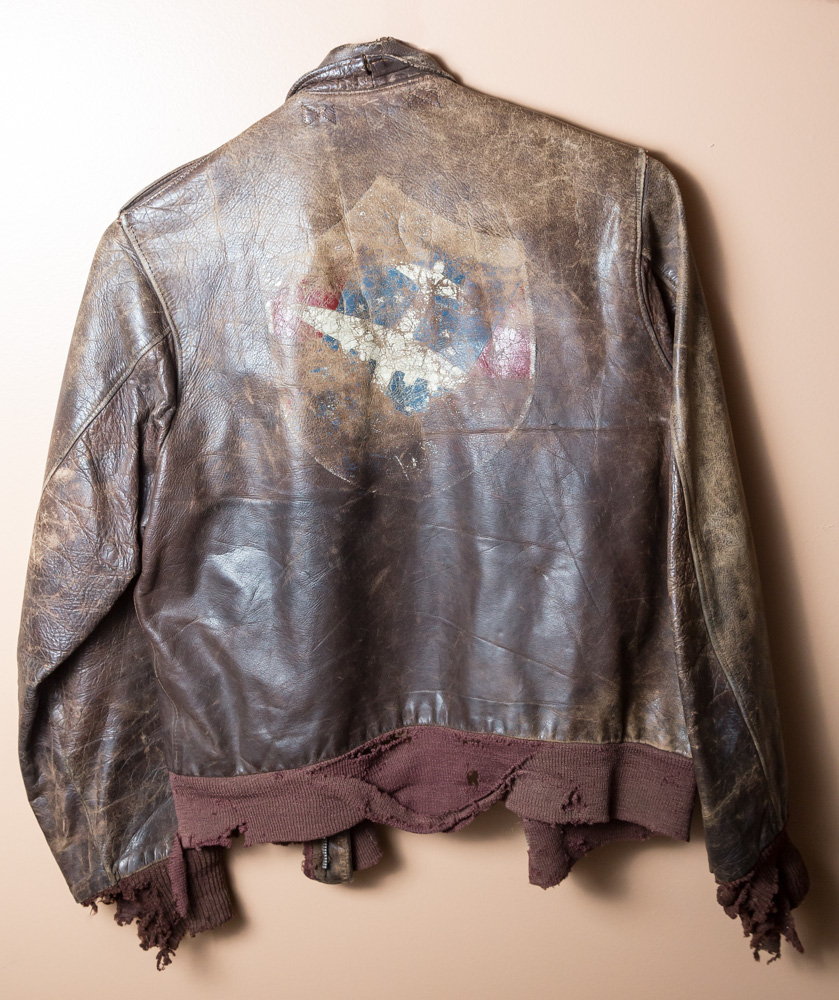 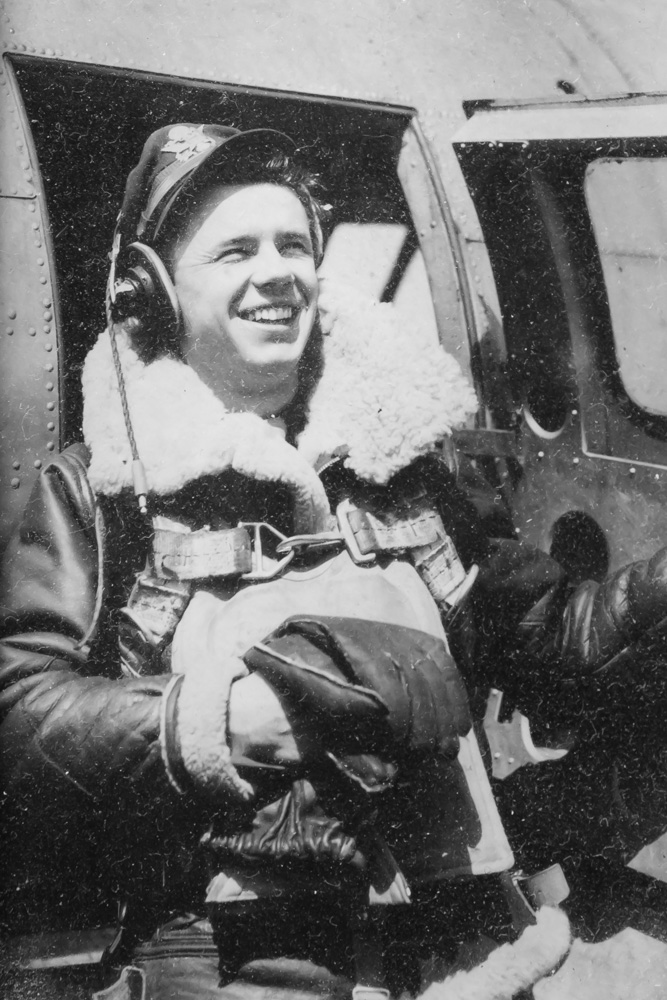 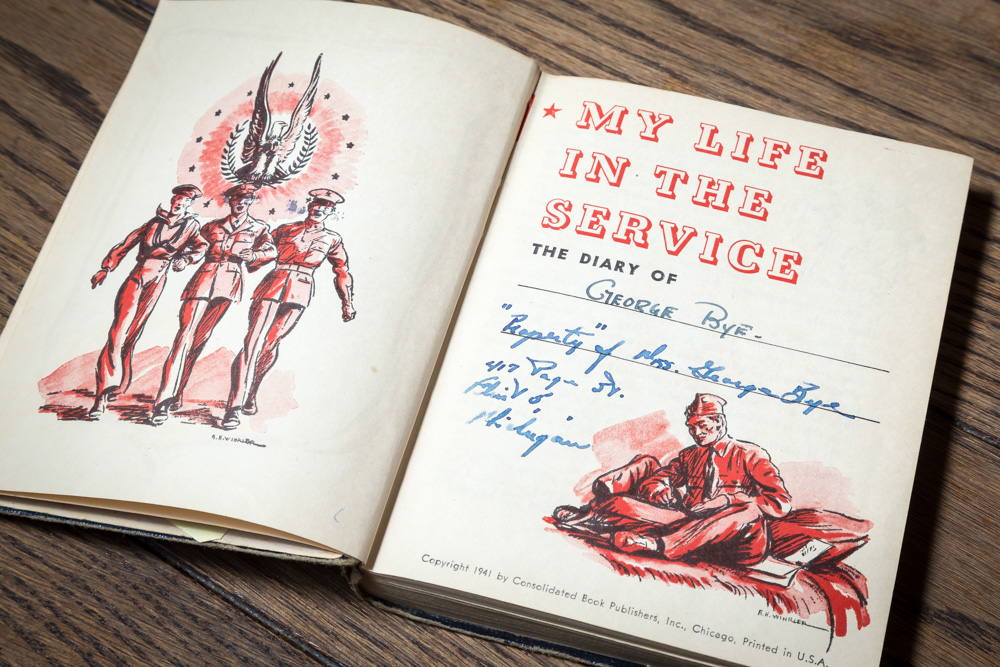 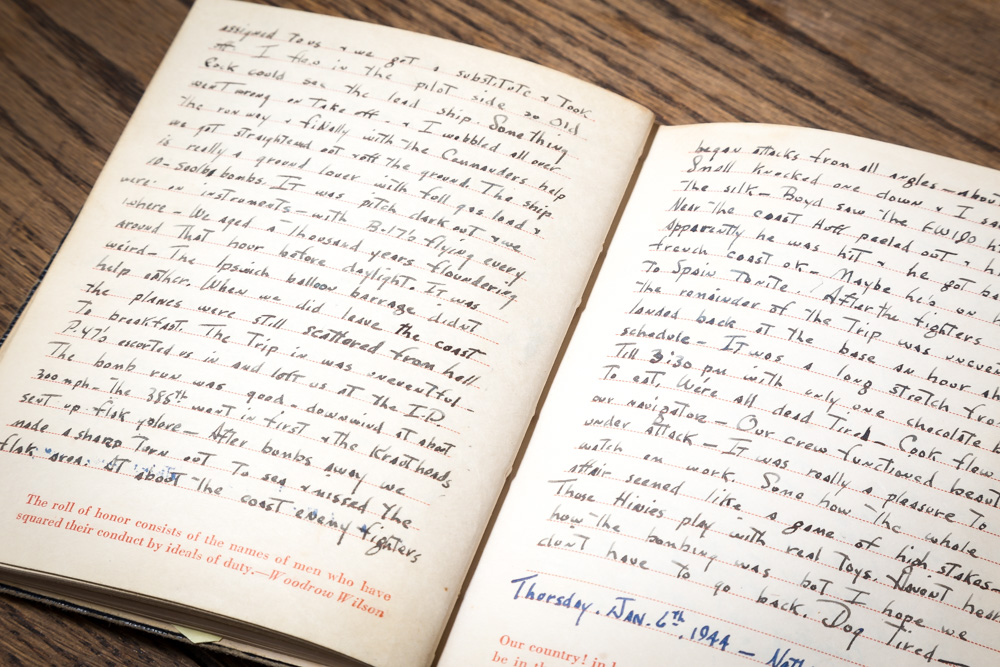 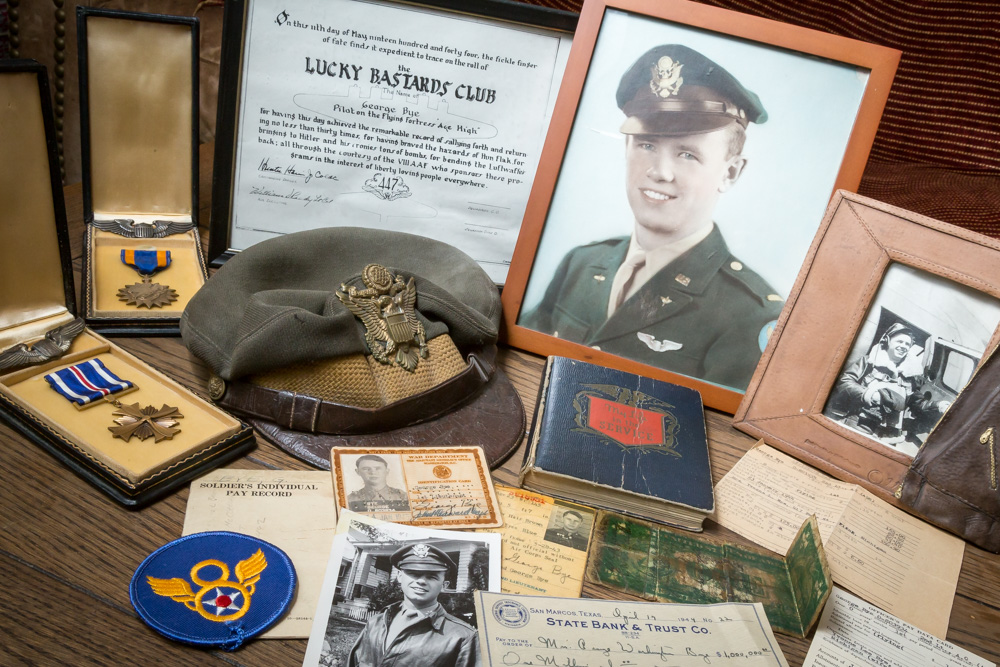 George was born and raised in Dooley, Montana, a very small town. At the school he attended, he was in a classroom of eight – four of whom were his siblings. He came to Michigan to work with his brother in the excavating business. Before going off to serve in the war, he married Yvonne Thorp, and they raised five children. George’s hero was Charles Lindbergh, the American aviator who made the first solo flight over the Atlantic Ocean. His dream was to learn to fly, and after enlisting in the Air Force, George realized that dream by completing flight school in Maxwell, Alabama. “He got his wings there,” Joel says.

After George’s active duty ended, he re-enlisted, thinking that he may want to make the military a career. But in 1948, he ended his service, because he didn’t like traveling so far away from his family. He was in the construction business for many years and in the ‘70s, he bought the Eagle Aviation flight school. He flew mail and did charter services, and at one time, he even piloted a flight for the famous actress, Lana Turner.

George had documented most of the days he was in the service in a diary.

Santa didn’t bring Miss Turner nor any mail. Had the day off. Report to operations and tried to get our ship from Honington but it is not ready yet. It’s been a bleak day – foggy but cleared up this afternoon. No church here today. Dinner is at five. Think we will go to the village tonight. We aren’t on alert to fly tomorrow. Sincerely hope next year is merrier.

Over the years, George shared many stories with his son. “Dad didn’t like talking about the war, but I was interested,” Joel recalls. But he did talk about his captain, James Dalzell, whose plane had been shot down. George had assumed that the captain was dead.

In the 1980s, an Eighth Air Force reunion was held in Florida and Joel told his father he should attend. “I wouldn’t know anybody,” George replied, “Everyone I know is gone.” But he was in for quite a surprise. George received a call from Captain Dalzell, 40 years after his plane had been shot down! It turned out the captain was taken as a POW and then freed when General George S. Patton liberated Stalag Luft III POW camp in the German province of Lower Silesia, near the town Żagań, Poland. “Dalzell called to ask if my dad was going to the reunion,” Joel says. “It was the only reunion he went to.”

When they met up at the reunion, Dalzell told George that during that last flight, he had feathered his No. 3 engine and began to lose altitude. Unable to keep up with the formation, he was attacked by the German fighters, setting his plane on fire. He bailed out and was captured shortly thereafter.

George retired in 1987 and passed away in 1989, but to Joel, his memory is very much alive. Joel spoke with Dalzell at the time of George’s passing. Since then, Dalzell sent Joel a box of memorabilia and photos, which he has posted on his Facebook page. Joel also has many artifacts from his father’s WWII days, including his bomber jacket, medals, photos, wings, the diary, and an old dollar bill that was signed by the members of his bomber group. They all carried one in their pocket for good luck. “My dad had over 4,000 flight hours!” Joel exclaims. “He had to fly 30 missions to be discharged.”

This is indeed a black day in the history of the 147th. The mission today went to Berlin. The railroad station in the center of town. Just outside the city, the fighters caught the wing. Hundreds of fighter, the group 10 crews, 11 air planes, five crews from the Squadron … Farrell, Blom, Dollar Donahue and Crew #7. Hitchcock and Morley were the only two Flying High Squadron to come back …  As of yet, I can’t feel the whole grief of  the loss of the boys. I can’t even feel my own good fortune at staying on the ground today. The place is gloomy. Hitch finished today. Got pretty bad shot up but got back. From all I can gather the fighters hit. H.T. and he caught fire. He was in a dive but under control and three shutes came out. So, there is hope … The boys were going to catch up today … Damn … Kleps went down with Dollar … he volunteered for the raid.

George Bye returned to the States in early June of 1944. This was the last entry in his diary:

Up at 8. Went down to PRO and got some pictures. Went over to 136 and saw Sykes. He still doesn’t hear so good … He’ll be OK and up before too long. I sent a wire to his folks saying he had finished but didn’t say he was hurt. Happy got his Distinguished Flying Cross today. Still missing old Nick. Things aren’t the same.

Joel thinks about his father every day and has plans to write a book about him. “He was just, he was fair, he was a good man. He would always tell me, ‘All you have to do in this life is the right thing.’” He remembers that his father would refer to Joel as a “war buff.” “I’m not a war buff,” he says. “I’m a hero buff.”