For David Custer, presenting the truth is everything – both as a journalist and personally. As the head news anchor at WNEM TV5 since 2016 and an openly gay man, he has hidden nothing from his viewing audience. Every night, Custer, alongside his friend and co-anchor Meg McLeod anchors the 5pm, 5:30pm, 6pm and 10pm broadcasts, providing up-to-date news bulletins and stories ranging from tragic to inspiring. His reporting has earned him seven regional Emmy Awards, several Associated Press and Michigan Association of Broadcasters Awards, and the Great Lakes Bay Region’s Ruby Award as one of the brightest professionals under the age of 40. His personality, style and local storytelling has won him the coveted My City Magazine City’s Choice Award for Best News Anchor for the last six years. (As of this writing, Custer was nominated for 5 more Emmy Awards.)“It is the job of the journalist to seek the truth, to hold people accountable and expose corruption,” he states. “It is our responsibility to accurately tell a story as it is and hold nothing back.” This is always true of Custer: even when the story is his own.

That story begins right here in Genesee County. “I moved to Goodrich from Grand Blanc in the late 80s,” he remembers. He grew up a Martian and got his first taste of writing as section editor for the Goodrich High School yearbook. He recalls a mostly good experience living in a small mid-Michigan town, with one exception: most days in high school were hard for him. “I was tormented and bullied almost daily by my classmates,” he says. “At the time, I knew I was gay but I kept it to myself and kept it from my parents. After school I would get off the bus, climb to the top of a hill near my home and cry. Then I would compose myself, walk into the house and tell my parents that I’d had a good day.” With no one to turn to for help with the bullying, he wrote a letter to the Commission on Civil Rights. He did not receive a reply. “I didn’t want to be gay and wished I could change,” he states. Instead of changing himself, however, Custer soon changed his situation and his life. It was in college where he found the support and confidence he needed.

Custer attended UM-Flint as a biology major, but that didn’t last. “I started writing for the school paper The Michigan Times and found out that I loved it,” he says. That, and a day spent on the job with his cousin at a local news station cemented his professional future. His personal future was influenced and shaped by the diverse college community. “It was a new beginning for me,” he says.

“I developed friendships and found people who made me comfortable with who I was. They gave me the courage to be more authentic.” It was then that he chose to come out of hiding and present his truth. With that known, Custer was free. He would continue advocating for the LGBTQ+ community through today, and in 2015 was named “Champion of Pride’’ by Great Lakes Pride. 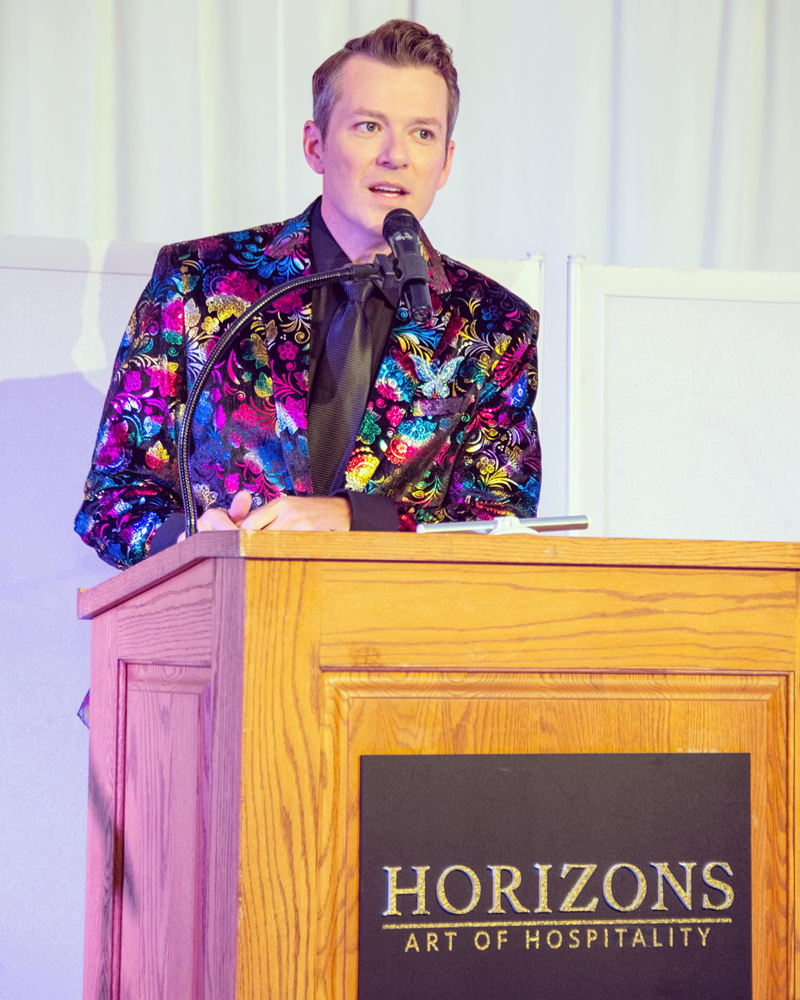 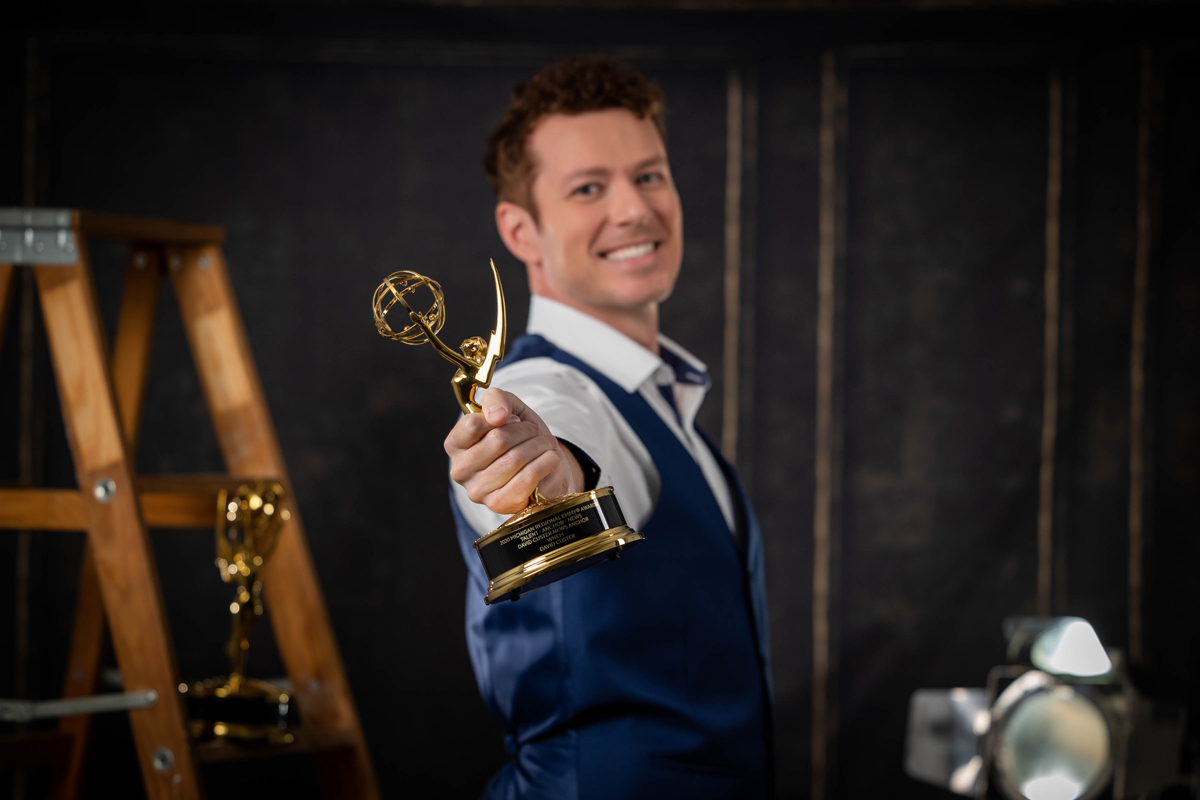 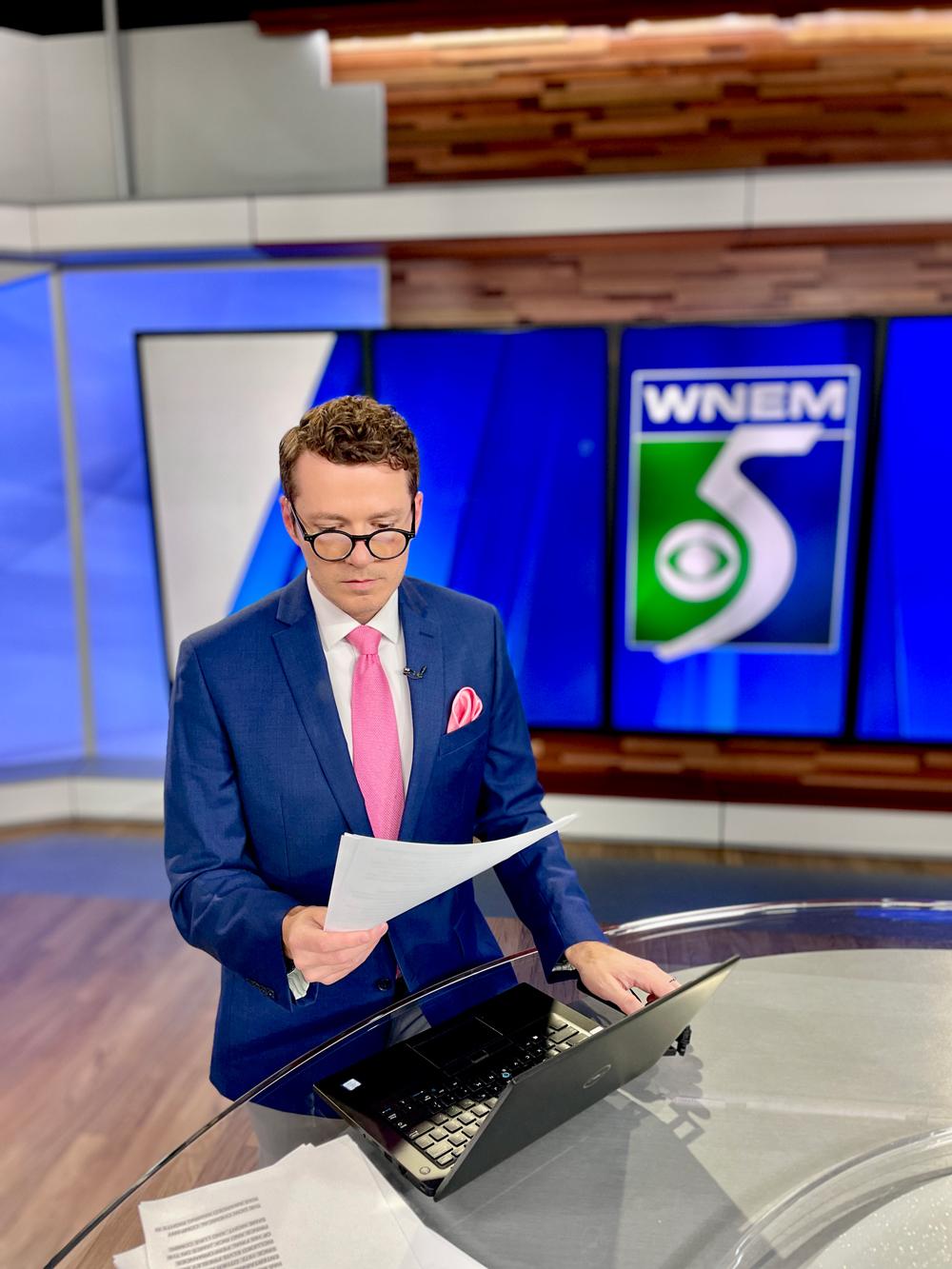 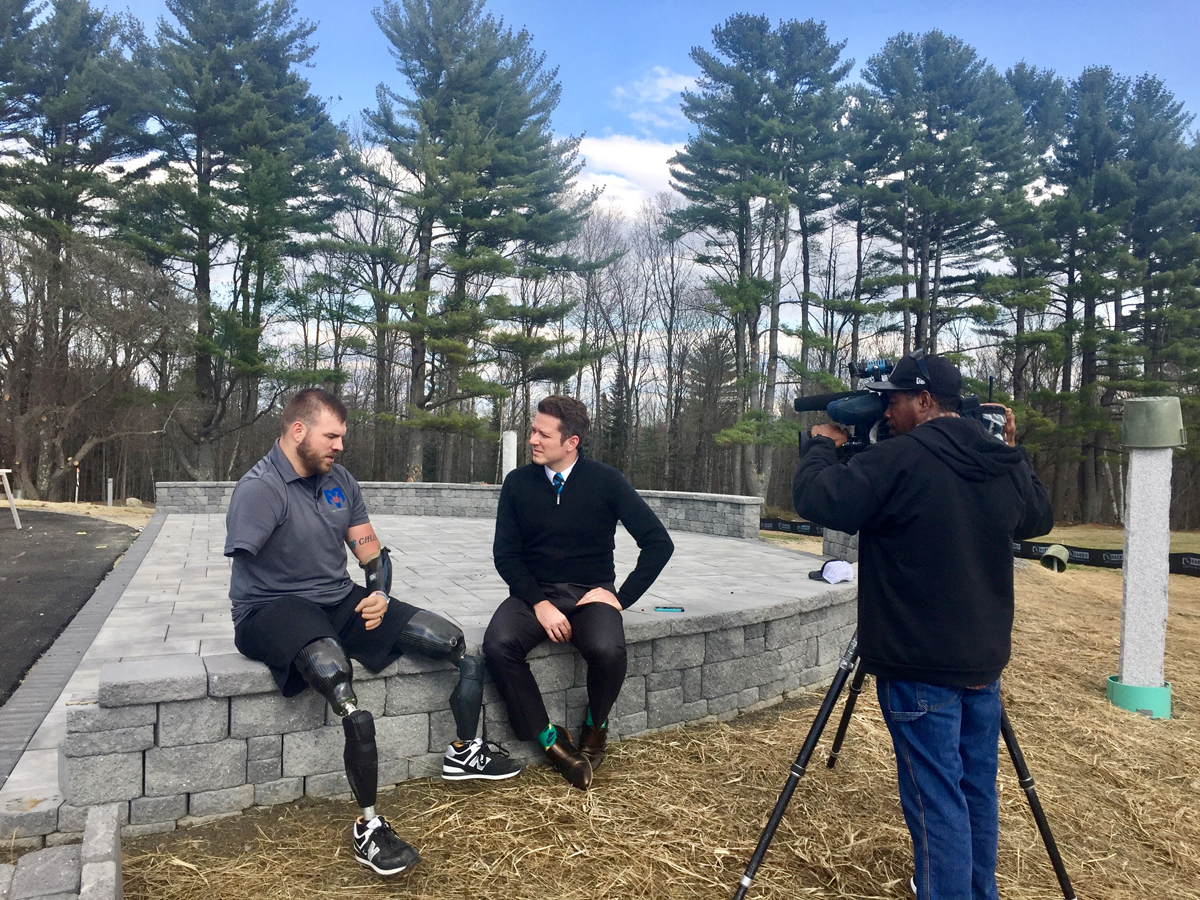 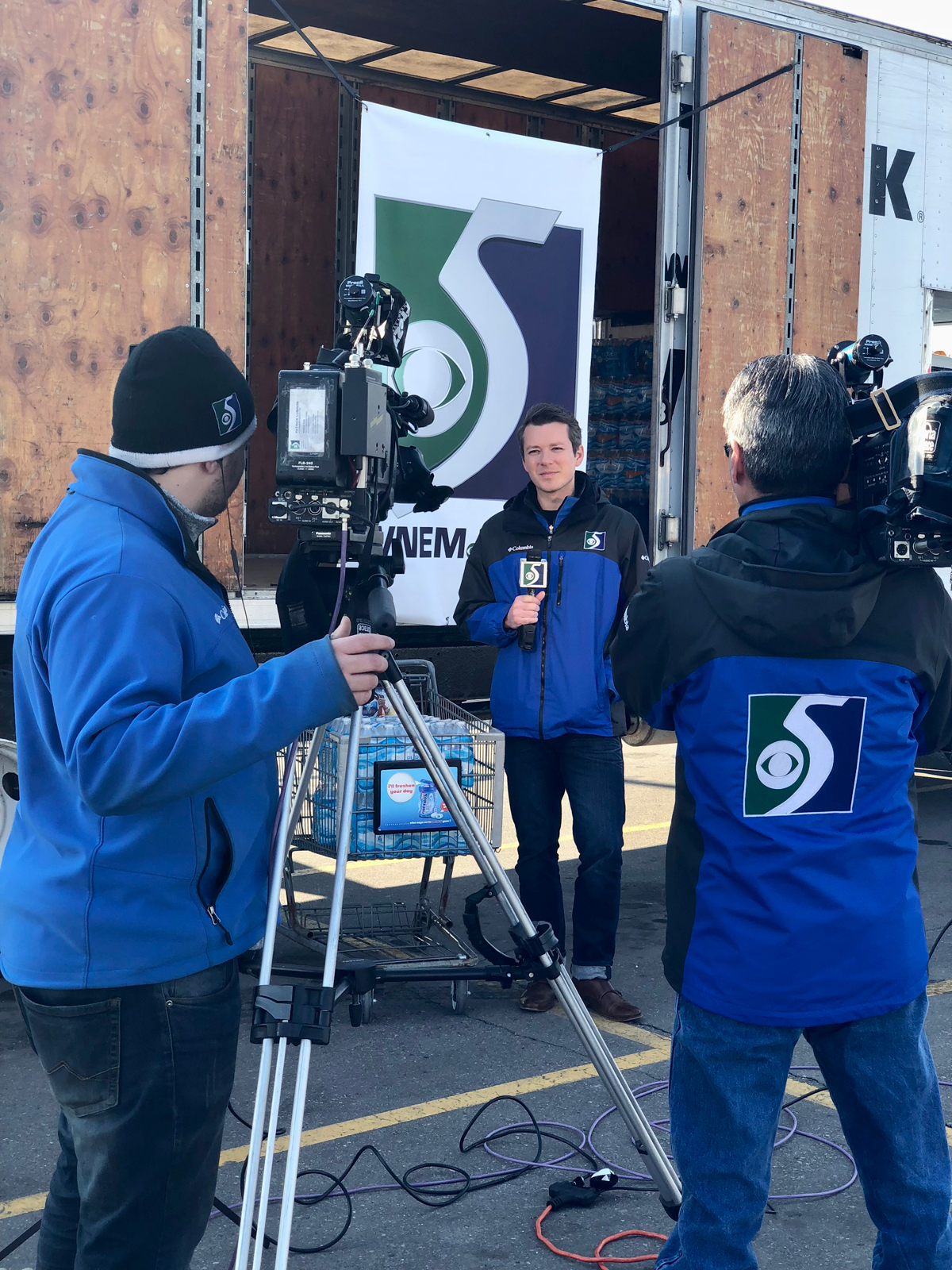 After college graduation, he sent out hundreds of resumes and VHS audition tapes to TV stations all over the country. “I received two offers,” he laughs, “in Alpena and somewhere in North Dakota. In 2002, I took the news anchor job in Alpena.” He worked there for six months before receiving an offer from FOX 66 in Flint. Although it was brief, Custer is grateful for his time in Alpena. “I had to do everything from editing stories to setting up. I had to lug 50 pounds of equipment everywhere I went. It made me more well-rounded in the studio.” He then took a job as main news anchor for an NBC affiliate in Toledo, OH where his career journey nearly ended. “It wasn’t a good experience,” he remembers. “When I started, they laid off a majority of the staff including my co-anchor, and they wouldn’t let me out of my contract until I found a replacement.” Eventually, Custer was released and once free, almost quit the profession. He worked for a friend at Country Home Creations in Goodrich for nearly five years. The draw of the TV camera, however, wouldn’t let him go. He started recording food videos he distributed on YouTube that were soon picked up by WNEM TV5. In 2016, the WNEM news director offered him an anchor spot. Custer accepted without hesitation and has been manning the news desk since.

The WNEM experience has had trials and triumphs for Custer. From the beginning, his storytelling stood out as factual and heartwarming. He receives hundreds of submissions from people who enjoyed his reporting and have trusted him to tell their stories – something in which he takes great pride. Professionally, he’s been accepted; personally, being “out” has brought challenges. At least it is not, he admits, like his high school days. “I get both positive and negative messages from viewers and I have learned how to handle negativity with support from viewers and my husband, Dan. For instance, I no longer read the comments,” he laughs.

When negativity becomes overly burdensome, Custer takes solace in his stories and in a particular email he received from a viewer who told him that seeing a successful gay man on TV helped save his life. Custer keeps a printed copy of the message with him wherever he goes. 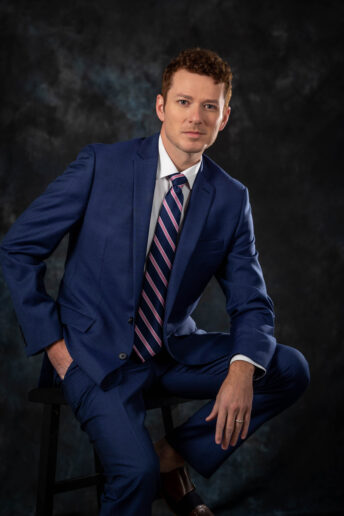 “Our industry is more important now than ever before. We need credible truth-seekers who will relentlessly seek it and hold people accountable. It’s our responsibility.”

Custer is a news professional in a time when journalism is in a state of crisis; everything is heavily politicized and facts are disputed. “Our industry is more important now than ever before,” he states. “We need credible truth-seekers who will relentlessly seek it and hold people accountable. It’s our responsibility.” Social media skews the very perception of journalism and is a constant problem for hardworking industry professionals. “People think I spend my time sitting at a table figuring out how to spin a story one way or another. That’s not something we do. We tell the story as it is and people forget how painstaking it is to confirm information.” While social media is immediately spewing hearsay, Custer is busy verifying facts. Journalists have trouble navigating the chaos while maintaining their integrity and to journalists like Custer, integrity is very important. In Toledo, he got into hot water while on the air when his director told him to report the news of Michael Jackson’s death that had been received from an online source. He refused to do so until the story could be verified.

In his relentless search for truth, Custer has interviewed political candidates and celebrities (Cher stands out), exposed corruption, and provided hope and inspiration. (He even went skydiving. “Never again!” he laughs.) But what he is most proud of, even more than his numerous awards, are the people listed on his awards – those who trusted him to tell their stories and the truth he uncovered. “I exposed a small town police chief who was selling badges for $1,000 each and allowing the owners to get away with anything,” he says. “I have also spoken to a family that, during COVID, stayed outside their grandmother’s hospital window every day so she wouldn’t be alone at the end of her life.” These stories give him strength and purpose. At the end of the day, it’s what means the most.

The ability to present a story in an entertaining and informative way according to the facts is the essence of journalism. Custer advises that for those who love telling stories in a visual way and are passionate about finding the truth, a career in journalism can hold a rewarding future. “Make sure to never insert yourself into the story,” he cautions.

“As a journalist, it’s never about you.”

It’s been a long road and since 2016, David Custer has been presenting the truth at WNEM TV5. He has no plans to do anything else. “I live day to day and walk out of the station with a sense of accomplishment,” he smiles. “I’m content with who I am.”