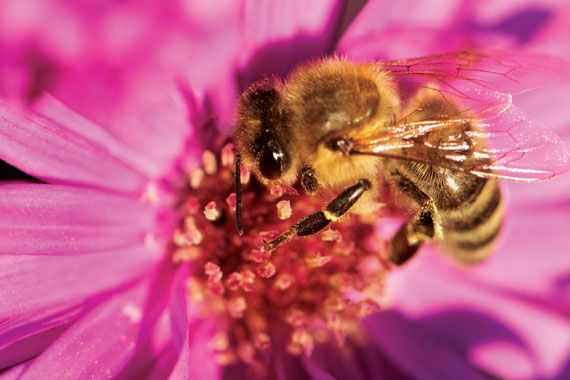 People were buzzing around the Mott Community College Regional Technology Center on Monday April 29, 2013 for the third annual Honey Bee Symposium, sponsored by the Ruth Mott Foundation, Wild Ones, and Mott Community College. All three organizations are supporters of green initiatives and buying local, and this event, says Rebecca Gale-Gonzalez, Vice President of the Flint River chapter of Wild Ones, was a collaboration that resulted in a family-fun event for all ages. The featured film, “The Quest for Local Honey,” focused on beekeeping, on the importance of honey bees in the overall sustainability of the environment, and on honeybee health.

The afternoon was sticky sweet as kids from the Freeman After-School Program made crafts and adults shopped amongst the vendor stalls for locally-produced honey, beekeeping equipment, and native plants. Darren Bagley, a 4-H Educator in the Genesee Extension of Michigan State University, spoke with kids about the role of the honeybee in their daily lives. “Teaching the kids to buy local is part of it, but what we really want kids to learn is where their food comes from,” he said. In an urban society, children grow up with very little understanding of agricultural life, and Darren says that he works for the “light bulb moment,” when children understand that food is a valuable resource, produced at a cost—both financial and environmental.

Melville Kennedy, President of Wild Ones, a leader in the native plant movement, says that bees are crucial to the production of food and the overall health of the environment because of the role they play in pollination. “It has often been said that bees are responsible for one out of every three bites of food we eat,” he stated. The widespread decline of honeybees nation-wide, also known as Colony Collapse Disorder, is thought to be precipitated by a lack of nutritious food, habitat decimation and pesticide use. “Honey bees need a varied diet, just like humans,” said Rebecca Gale-Gonzalez. “A field of corn, although it looks green and luscious, is actually a nutritional desert for bees, who need a well-balanced diet of pollen from native plants—many of which are seen as ‘weeds’ that we snuff out with lawn care chemicals—to stay healthy.”

Mike Belco, head beekeeper at Applewood, says that honey has “magical” properties. Revered in ancient cultures, it is an anti-bacterial and anti-viral agent, a healthier energy booster than white sugar, and an immune system stimulant. In Greek mythology, Melissa—which means honeybee in Greek—was a nymph who nursed the god Zeus with honey instead of milk. In the Old Testament, the Promised Land of Moses and Joshua is described as a land flowing with milk and honey. “Honey seems to be an elixir of life,” says Mike, who hopes to see people take the side of these miraculous creatures by protecting their habitats and food sources.

What you can do:

The Bee Symposium encouraged attendees to do what they can to get involved with the honeybee. Here are some ways you can help: