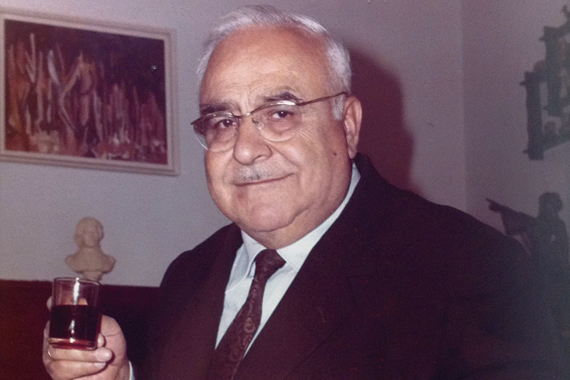 The city of Beirut, Lebanon was once described as “The Paris of the Mediterranean.” It was a grand, cosmopolitan city bustling with people, shops and food, offering a vivid array of colors and scents to delight the senses. “It was such a beautiful city,” reminisced Ronny Medawar of Medawar Jewelers in Flint Township, “such a beautiful, beautiful country.”

The Medawar story begins with Ronny’s grandfather, Chakib Medawar, who supported a wife, five sons and two daughters as a self-taught watchmaker in Beirut. It all started when Chakib’s neighbor broke his pocket watch. The neighbor knew that Chakib was a genius when it came to fixing things, so he gave him the watch to see what he could do. Chakib took two hair pins – he made one into a screwdriver and the other into tweezers – then he took apart and reassembled his neighbor’s watch. It began ticking again! After other neighbors heard about Chakib’s talent, they began bringing him their watches, and Chakib fixed them all. He became very accomplished at his craft, and in 1920, opened his first watch and clock repair shop.

Chakib passed down his craft of clock- and watch-making and repair to his five sons, all of whom were named after Biblical men: Michael, Paul, Philip, Pierre (which means Peter) and Samuel, Ronny’s father. Samuel has made clocks all around the world, including big tower clocks and unique timepieces such as flower clocks, in addition to repairing clocks and watches like his father. Life was good for the Medawar family. Then in the 70s, the civil war broke out in Lebanon, and everything changed.

The Medawars had three stores in Beirut, as well as a factory where they made tower clocks and flower clocks, but all were destroyed during the civil war. Samuel had no choice but to leave Lebanon and come to America. Some of the other Medawar family members had already left. Two of Samuel’s brothers, Paul and Michael, had moved to California and that was the direction in which Samuel was headed. On their way out west, Samuel, his wife Suzanne and daughter Carol stopped in Lansing, MI to visit Suzanne’s sister. During the visit, Samuel took a liking to the area. Sam travelled on to California alone, intending to prepare a place for his family, but returned a week later knowing that Lansing would be his new home.

Samuel went to local jewelry shops and asked if they needed someone with his skills. Each one claimed they could not add a full-time watchmaker to their payrolls. One day, while taking a walk in Downtown Lansing, Samuel wandered into another jewelry store and made small talk with the owner. He told the proprietor that he was a watchmaker, and asked if he would allow him to put a small work bench in the store with a sign in the window for watch repair; it would cost the jeweler nothing, and Sam would split the profit with him 50/50. The jeweler perked up and accepted Sam’s offer. Sam went to Kmart and purchased wood, then built a watch bench and placed it in the jewelry store. “This was the small beginning of Medawar Time Service in Lansing, MI” laughed Ronny.

As time passed, the jeweler told his friends about Samuel’s skill, and Sam began receiving calls from many area jewelers. He then moved to a bigger space where he had room to grow. Jewelers would send watches to Sam from all over – Grand Rapids, Detroit and Flint – and he would fix them. Three of his brothers moved to Michigan to help with the Medawars’ expanding jewelry business.

Samuel followed in Chakib’s footsteps and passed his knowledge of the craft down to his son, Ronny. “My father would say to me, ‘Ronny, listen to me. Sit next to me. I will help you become a watchmaker or whatever else you choose to be.’”

“I chose to be like him,” says Ronny today. “He is a great man.” To this day, Samuel cannot sit and rest. “Work is like breathing to him,” Ronny says. “Dad’s passion is fixing watches, clocks and designing and creating jewelry.” He also said his father wouldn’t be the man he is today without a strong woman by his side – Ronny’s mother, Suzanne. “She raised us (Ronny and his sister Carol),” said Ronny. “She worked at the store every day and still cooked dinner every night, among all the other things a great mom would do. She is the only person I know who works harder than my father.”

As both the jewelry business and the family grew in Lansing, Samuel decided it was time to expand the venture. So at just 20 years old, Ronny became manager of the Lansing store while his father opened a store in Flint. Why Flint? “My father believed in Flint,” says Ronny, adding that it wasn’t just the city; it was the people of Flint who drew Samuel to the area. “Flint is just a name. What Flint really is, is the thoughts, passion and the heart of the people who live here and in Genesee County.” Ronny moved to the area in 2001 and has expanded the business since then. “I call this area my home,” Ronny states, and he has seen many changes around town since then. “People have to accept the fact that it is up to them to make this city a better place,” he says firmly.

Now, Ronny has indeed followed in his forefathers’ footsteps. He sits on the watch bench daily and is very involved in jewelry design. He is every bit as passionate about the pieces sold in his stores as his father and grandfather before him. Ronny remembers how enthusiastic his father was about building and designing the Flint Township store. “He is very creative,” boasts Ronny. Taking after his father once again, Ronny designed and built his Fenton jewelry store himself.

Growing up, Ronny remembers watching his father make a flower clock in the backyard that was 24 feet in diameter. He welded the pieces, sanded and painted the hands of the clock, his passion evident in every meticulous motion. “You give a little piece of yourself to every watch, clock and piece of jewelry you make,” says Ronny. Clearly, the success of the Medawar family’s jewelry business is directly related to how they live their lives: not only is their work carefully crafted, but they extend the warmth of kin to all who walk into their stores. “We treat our customers as if they are family. It is the only way we know how to operate,” says Ronny.

Medawar Jewelers continues to grow. The Flint Township store started out with a five-member staff and now, Ronny owns four stores around Michigan and employs more than 35 people. His father, the watch and clock maker, continues to inspire him. “If I can be an example to my children and nieces as my father and mother were to my sister and me, it will make me extremely proud,” says Ronny. “I have big shoes to fill. I try to fill those shoes every day.”