Randy Matteson has been an officer with the Flint Police Department since April 2004. After graduating from Clio High School, he didn’t know what he wanted to do with his life, so he went to college and earned his degree in Criminal Justice at Mott Community College. “It was the best decision I’ve made,” he says. During the day he is protecting and serving the citizens of Flint. At night, he is a family man who enjoys spending time with his wife and coaching his daughters’ soccer teams. My City Magazine was granted a ride-along with the busy patrol officer who works a 12-hour daytime shift. 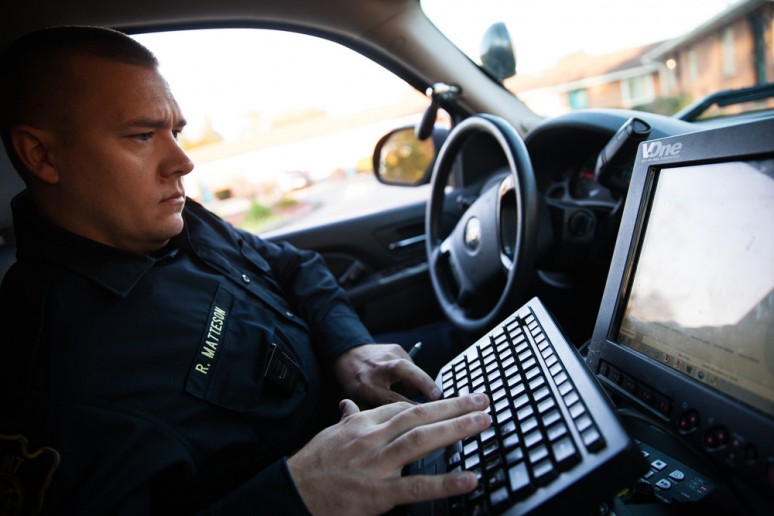 Officer Matteson’s day begins with roll call. “We are briefed on what happened during the previous night shift and about what to expect that day,” he explains. The day’s assignments are then given out and any new rules and regulations are discussed. Officer Matteson was recently re-assigned to first shift and his assignment was patrol duty on the east side of the city.

The first call he responded to was a complaint about an elderly woman who was exhibiting strange behavior, dropping lit cigarettes on the couch, and the caller was afraid she would set it on fire. By the time Officer Matteson arrived, the woman was with her husband and was asleep. “Everything was fine,” he says. 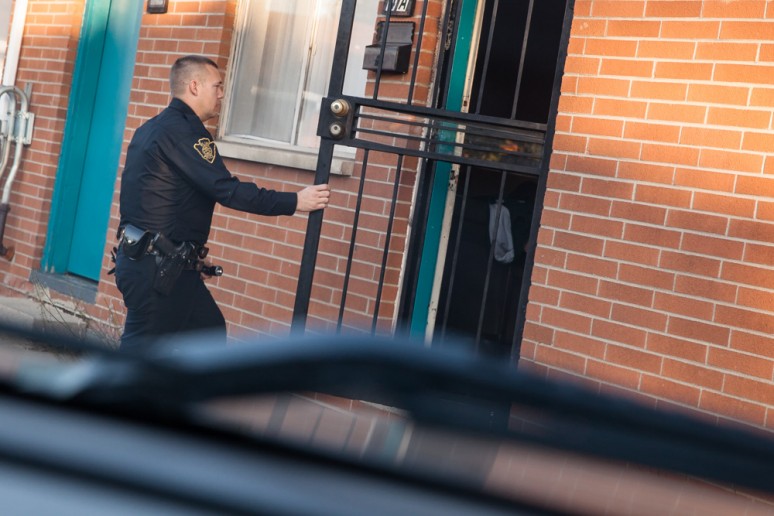 Not quite an hour later, a reported domestic disturbance sent Officer Matteson to an apartment building on Flint’s east side. The call was from a pregnant woman who had been assaulted by the father of her child – he had left the home by the time officers arrived. Another police cruiser was dispatched as back-up. An ambulance arrived at the scene, as the victim was complaining of abdominal pain. According to Officer Matteson, domestic disturbances are considered high-priority which is why a back-up officer was sent to the scene. “I will file a complaint for her [which is done in the cruiser on the police CAD computer]and if he comes back, he can be arrested,” he explains. “It is up to her to follow up the complaint with the detective.” And even if she doesn’t pursue charges against her alleged attacker, the prosecutor can, especially if domestic violence is involved. “A battered spouse can often get scared or pressured,” says Officer Matteson. “It’s a big step just to make that call for help. Unfortunately, by the end of the day, they are usually back in love.”

Paperwork … and more paperwork. Officer Matteson was able to type the police report right in the cruiser on the CAD computer. “Paperwork is the worst part of this job,” he laughs. “There are hours and hours of it!” When he talks to any kid who thinks they want to be a cop, he always advises them that they had better have writing skills.

Officer Matteson stops at a gas station where a woman had called 911 to report an assault. The woman was no longer at the scene.

Officer Matteson says there is no set lunch hour during a shift; he usually brings a lunch from home to eat in the patrol car when time allows. 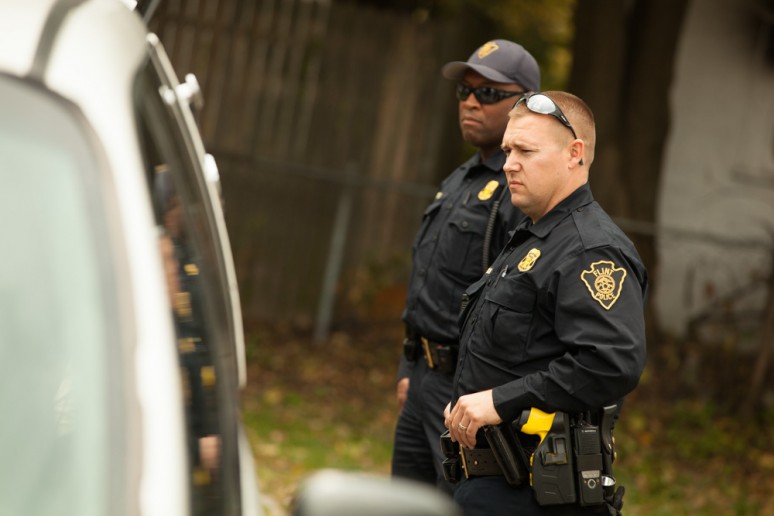 Officer Matteson continues his patrol and answers a call for a residential alarm check. Most of the alarms are accidental, he says. A call for a “welfare check” led him to a home where someone was found deceased (of natural causes). He also responded to a minor traffic accident.

In regard to whether his life had ever been endangered while on duty, he says, “I’ve never been shot, but I have heard gunshots just a couple feet away from me. I don’t get scared doing this job – I block out thoughts about things that might happen.” He also remembers being shot at following a car chase. However, the shooter’s car caught on fire and the smoke interfered with his ability to see.

As one would imagine, any call involving a murder is not easily forgotten. Officer Matteson remembers responding to a string of home invasion calls that eventually became murder cases. The first victim was an elderly woman who was found bound with electrical cords and had been beaten with an air-conditioning unit. The police had no suspects. What monster could do this? Officer Matteson asked himself. At the next home invasion address, they found an elderly deceased man with seven knife handles sticking out of his back. “The perpetrators took his car and went to the south end for another break-in,” Officer Matteson reports. The officers who answered that call recognized the vehicle and caught the three young men after a foot chase.

Officer Matteson says he has never been in a situation when he had to shoot someone, but he has been forced to use his Taser gun. About a month ago, he responded to a call and confronted a man holding a knife to a woman’s throat. “He’s going to kill me! Shoot him!” she screamed. “Drop the knife!” Officer Matteson ordered the man. As back-up officers arrived at the scene, the man started to stab himself. “I shot him with the taser to subdue him and protect him from injuring himself,” he explains. Officer Matteson also experienced being tasered during training. “It was the worst five seconds of my life,” he says.

When asked what the most rewarding aspect of his job is, Officer Matteson replies, “When I help someone. That’s when I’m glad I’m a cop.” One example is the time a woman had called to report that her daughter’s bike had been stolen. She said she knew they would never find it, but gave Officer Matteson a description of the bike and described how devastated her daughter was. While responding to another call, Officer Matteson saw a young man riding a girl’s bike that fit the description. “I didn’t arrest him, but I grabbed the bike,” he says. When he returned it to the girl, her mom was in total disbelief that he had actually found it. “It was a minor incident, but it meant the world to me,” says Officer Matteson.

And the worst thing about the job? Officer Matteson says that overall, morale among Flint police officers is down; but it isn’t due to the administration. “Chief Tolbert is the best we’ve had,” he says. “Police officers get burned out; they’re overworked and under-appreciated and the turnover rate is high. They always say that if you can do five years as a police officer in Flint, you can do it anywhere.” It’s no secret that social media has shed a negative light on police officers, in general. “For every bad call an officer makes, what about the thousands of good calls?” Officer Matteson asks. “In Flint, the majority of people appreciate us. We know how to approach our citizens with respect.” 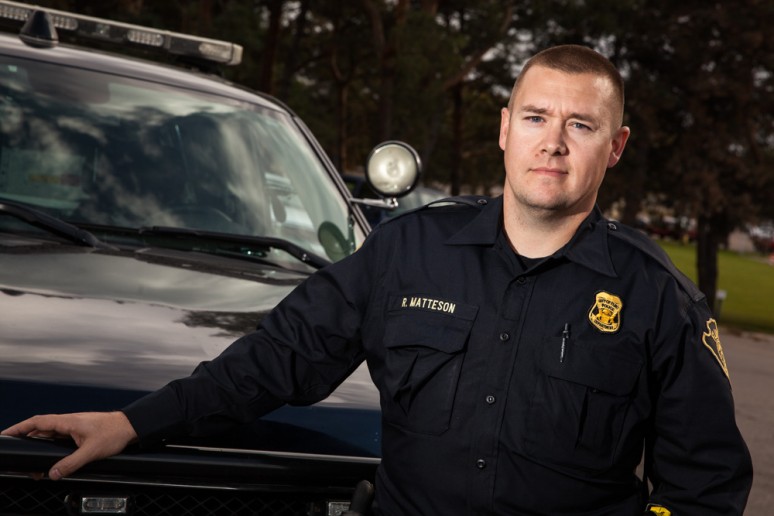 Officer Matteson’s work day ends after responding to 17 calls during his 12-hour shift and four hours of overtime. Driving back to the police station, he was stopped at a traffic light when a man in a car next to him beeped his horn. Officer Matteson rolled down his window. The man saluted and said to him, “I just want to thank you. Thank you for your service. Stay safe.”
“In Flint, the majority of people appreciate us. We know how to approach our citizens with respect.”
Officer Randy Matteson