The game grabbed Shane Proulx’s attention, causing him to sit up and take notice.

As he watched the 2008 Summer Olympics, the Grand Blanc man became enthralled with the dizzying, frantic pace of team handball. Proulx was fascinated by the way it incorporated elements of several sports he had thrown himself into at various times in his life – like basketball, soccer, hockey and rugby. “I’ve never been a great all-around athlete, but always liked to play all sports,” he says. “I was kind of amazed to see how handball is kind of like basketball and soccer, but there is also a little pushing and shoving like in hockey and rugby. I immediately wanted to find a way to play it, but was not sure how.”roulx contacted USA Team Handball, the governing body of the sport in the U.S., and was told he needed to start a club – quickly. “I was young (22) and sure of myself back then and thought I might be able to pull it off,” Proulx recalls. “They even sent me a net and a couple of balls, but I soon realized that forming a self-funded club in a short amount of time wasn’t easy. After a couple of weeks, USA Team Handball wanted their equipment back.” Proulx returned the equipment but refused to throw away his dream. Instead, he shelved it for more than a decade.

Last fall, he dusted that dream off and finally turned it into reality. Proulx and wife Mylisha founded Flint City Handball Club. “It was the right time because funding became available and we purchased our own equipment, so we could operate on our own timetable,” Proulx explains. “The other part of it was the coronavirus situation because, at that point, people had been stuck inside for much of the year and might be ready to get out and try something different.” 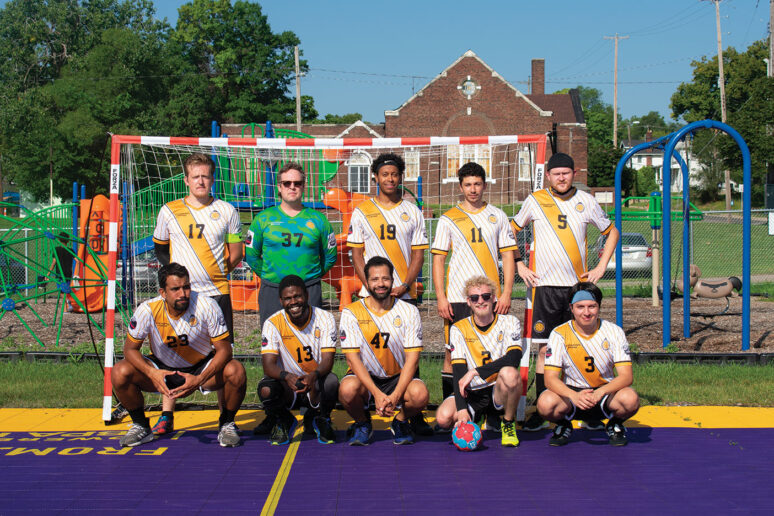 “Once people try handball, most find it’s very easy to pick up and love the fact that there is something for everyone in it, whether you like basketball, soccer, water polo, rugby or hockey.”
Shane Proulx 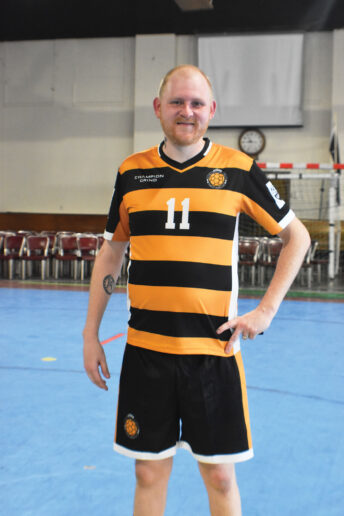 Early last month, the club hired an experienced coach in Todd Slitkas, who played at Northern Michigan University and around the world with Team USA’s reserve squad in the 1980s. He contacted Proulx after seeing the club featured on WNEM-TV. Participating in community events like last summer’s Juneteenth Parade in Flint has also raised the club’s profile. “I think doing all the little things to make connections in the community has really helped our club take off during its first year,” says Proulx, now a 35-year-old father of two. “It has not been a one-man show, either.

We’ve found a passionate group of players who do everything they can to promote the club, in-person and otherwise. It’s been pretty remarkable.”

An Olympic sport since 1972, handball is played on a court measuring 131 feet by 66 feet. The seven-player team includes goaltenders, who protect goals which are two meters high, three meters wide and surrounded by a 20-foot zone where only defending goalies are allowed. Goals can only be scored by throwing the ball from outside the zone or while diving into it. Some goals are scored with the ball traveling more than 70 miles per hour and from all sorts of angles and body positions. Balls are slightly smaller and harder than soccer balls.

Players score while leaping into the air, standing straight, bending at the waist, bending to the side and sometimes even while sitting and balls are thrown at the net underhanded, backhanded and over-hand.

Games consist of two 30-minute halves with no time-outs – only injuries stop the clock.

“Once people try handball, most find it’s very easy to pick up and love the fact that there is something for everyone in it, whether you like basketball, soccer, water polo, rugby or hockey,” Proulx says. “Most players feed off the challenge of playing at a fast pace and attempting to throw the ball into the net with somebody pushing you in the chest or knocking you around a bit. They find themselves putting in the time to get better.” Proulx then apologizes. “I’m so passionate about this sport that I tend to ramble on – sorry,” he says. (No apology necessary.)

Players like John Brown, who joined the club in August, are inspired by Proulx’s passion.

The 39-year-old, a soccer player since age 14, was seeking a new competitive outlet and jumped at the chance to play a sport he last experienced in high school gym class. “It worked out perfectly because I heard about the club, have known Shane for some time and wanted to switch things up after playing soccer since I was a kid,” says Brown, who lettered in soccer and track at Southfield Christian High School. “I was ready for something a little more physical and was reminded that’s one of the things I liked about handball as a teenager.” Brown loves raving about the sport nearly as much as Proulx does. “I love how handball pulls together the best parts of several sports into a great cardio activity,” he says. “Not just that, but it also brings together players of various body types and skill sets. The best players are those who are nimble and physical at the same time.” 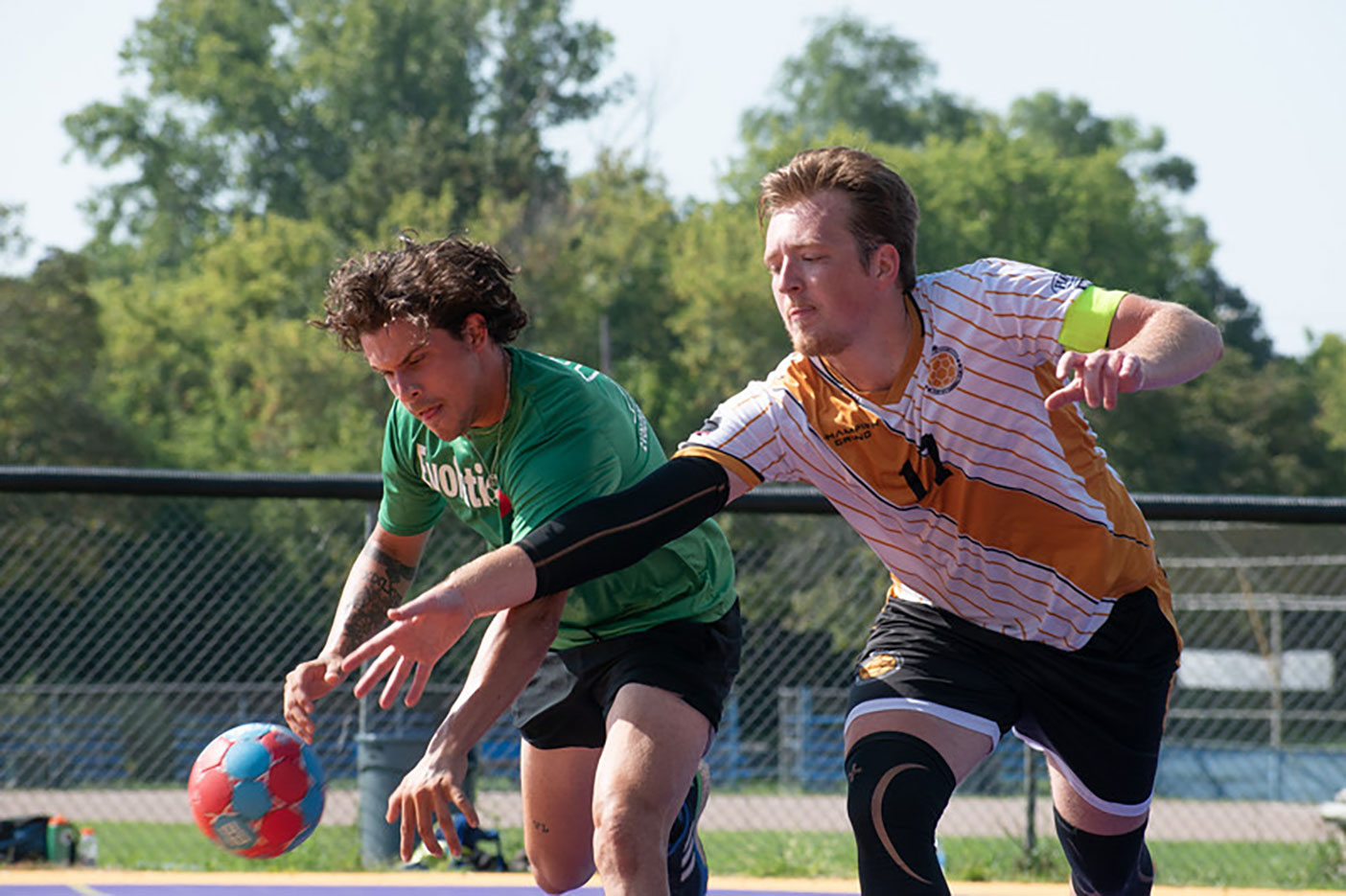 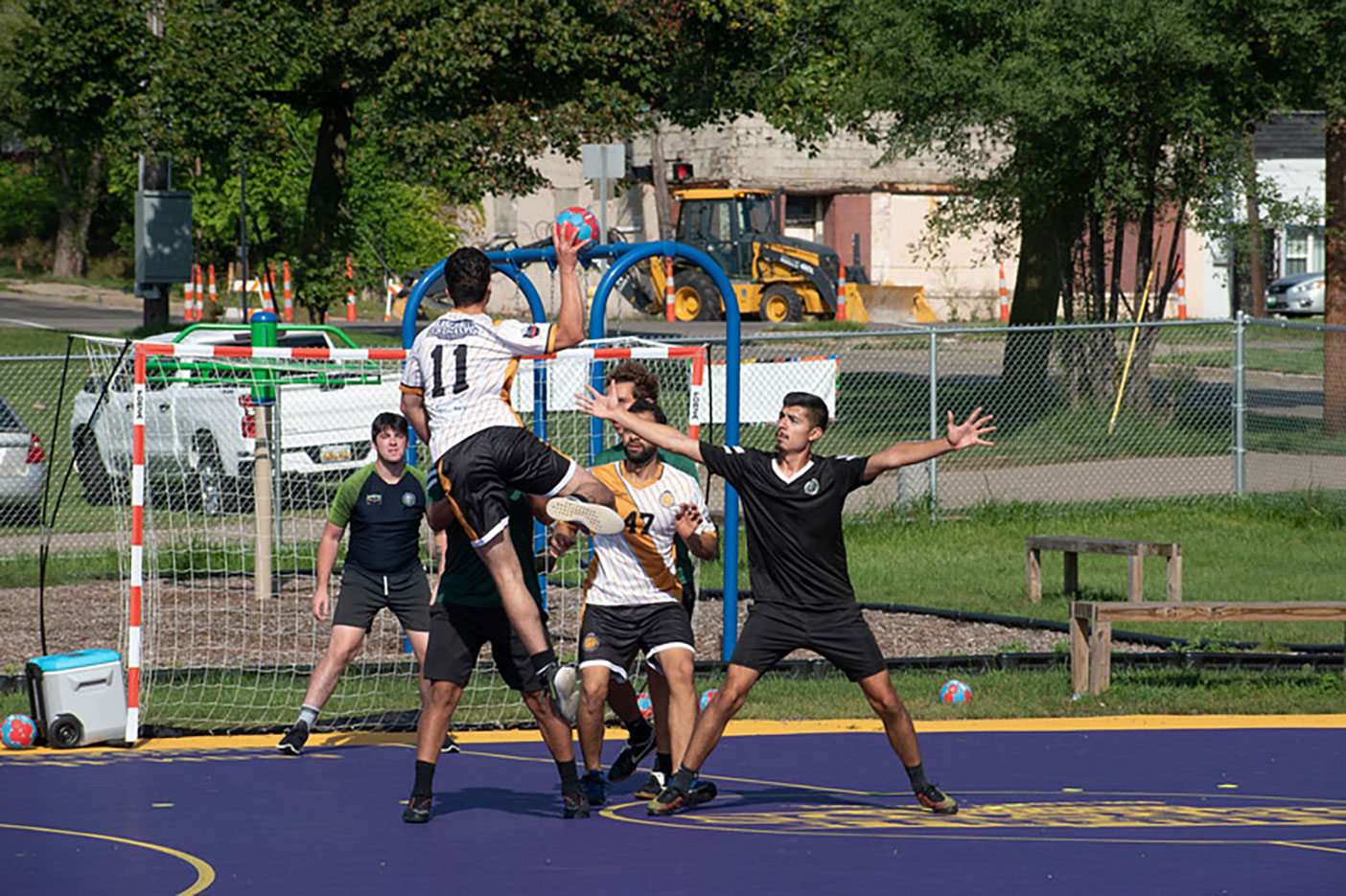 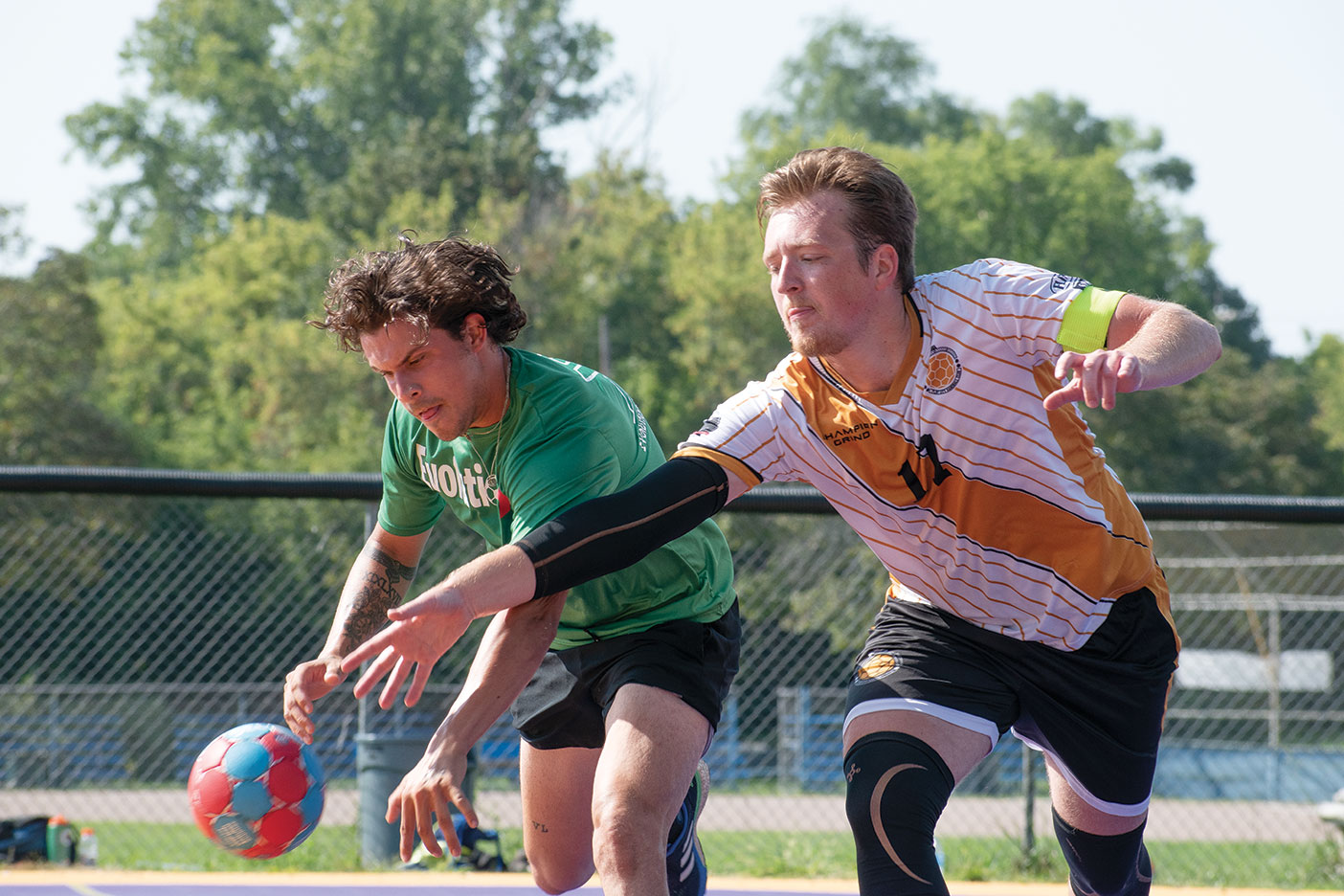 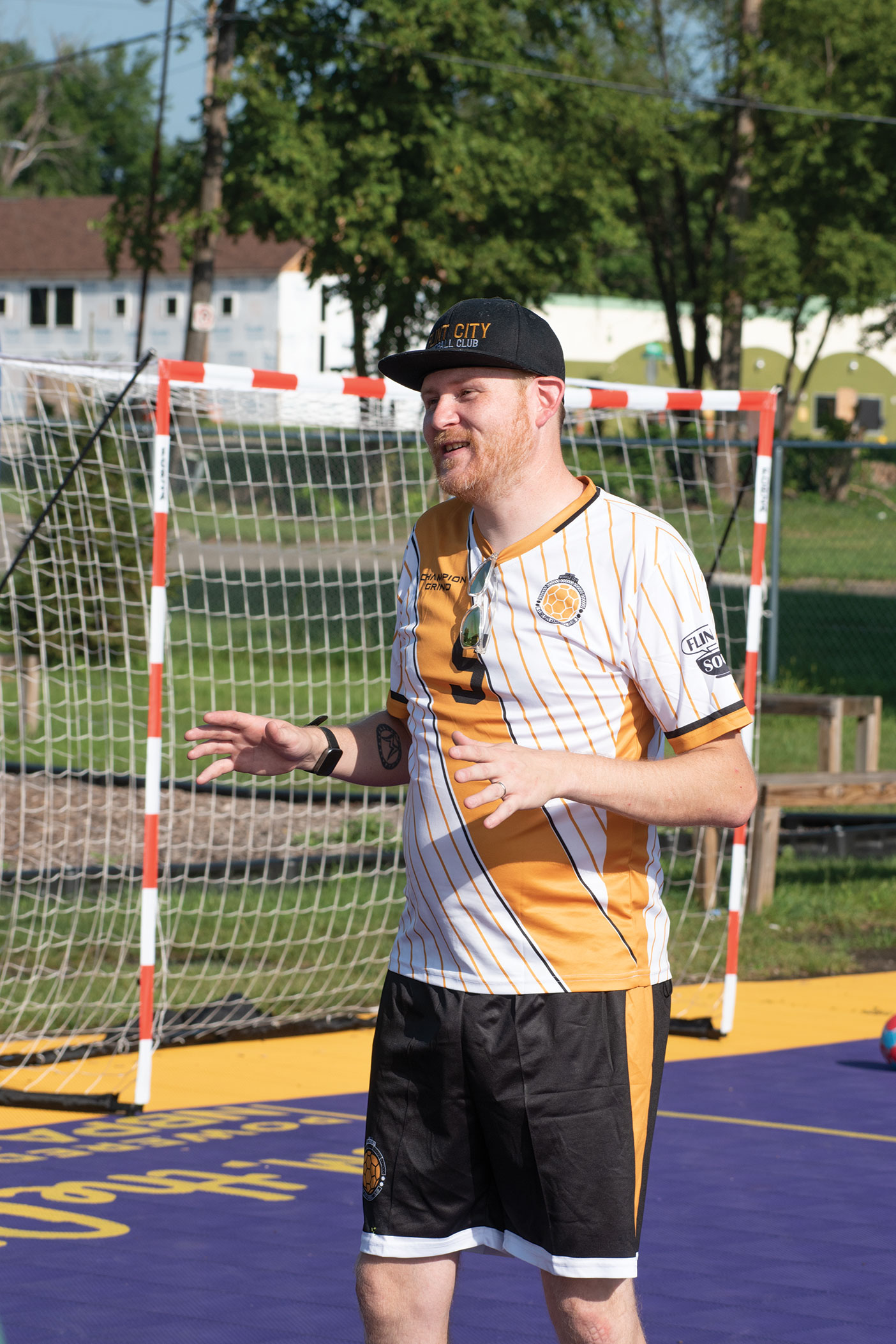 Proulx, a Pontiac native who moved to Grand Blanc about 15 years ago, announced Flint City Handball Club’s arrival by launching its Facebook page on October 3, 2020. Just 21 days later, he was conducting the first of many handball clinics at Grand Blanc’s Bicentennial Park.

Attendance was sparse, at first. “Especially at those first couple of events, it was just me setting up nets and sometimes getting odd looks,” Proulx says. “I was just looking for anyone willing to walk up and give it a try. Sometimes, that was only one or two people, but one of the earliest was Kris Johns, who is now our goalie. We kept at it and started picking up players.”

Less than three weeks after the first clinic, FCHC entered into a partnership with Berston to use its indoor and outdoor courts. Berston also provided jerseys.

In early February, during a visit to Berston, members of the Detroit Handball Club offered advice and assistance.

In April, the club joined the Flint & Genesee Chamber of Commerce. On May 17, nearly 13 years after Proulx first tried to form a Flint-area club, FCHC became an official USA Team Handball club.

And, on June 5, the club played its first match, a progress-measuring 30-9 loss to Detroit. “Of course, we wanted to beat them, but the match was also a great opportunity to see what we needed to do to move forward,” Proulx says. “Detroit is much more experienced with some players who grew up with the game. We’ve already built a great relationship with them which should help grow handball in the state.”

Although not against a handball club, FCHC’s second match was better – a 17-16 win over members of the Inter Detroit Soccer Club on Aug. 29. “They don’t play handball regularly, but have good chemistry because they have played a sport together for longer, which produced a very competitive match,” Brown says. “We learned we need more live action as drills can only do so much. We saw how much better we can be and things we need to work on like defensive positioning and attacking earlier.”

Johns and Eli Madar, who played for the University of Michigan-Flint’s club soccer team, serve as captains. Algerian-born Faycal Doughmane is the only player with significant handball experience. In addition to Brown, others on the roster as of mid-September were Ricardo Martinez, Trent Eaton, Jay Williams, Mousa Eissa and Brently Collins.

Future plans include expanding the roster, conducting youth clinics, forming a league with other clubs in Michigan and surrounding states and developing ties to European clubs. Flint City HC began hosting an adult 4-on-4 handball league at Berston in October and will be conducting youth clinics at Sylvester Broome Empowerment Village this month. Proulx also hopes handball can be part of next year’s CANUSA Games, the annual event that pits athletes from Flint against those from Hamilton, Ontario in a variety of sports.

Another goal is putting at least one player on a future Olympic roster. The U.S. has never won a handball medal and last qualified for the Olympics in 1996. Team USA automatically qualifies for the 2028 Games in Los Angeles as the host country. “It’s not crazy because the pool of players competing for Olympic roster spots is much smaller than other team sports like volleyball,” Proulx says. “Flint has produced Olympians in other sports. Why not handball?”

Ready to experience what handball is all about? Check out the FCHC Facebook page (facebook.com/FlintCityHC) for details.