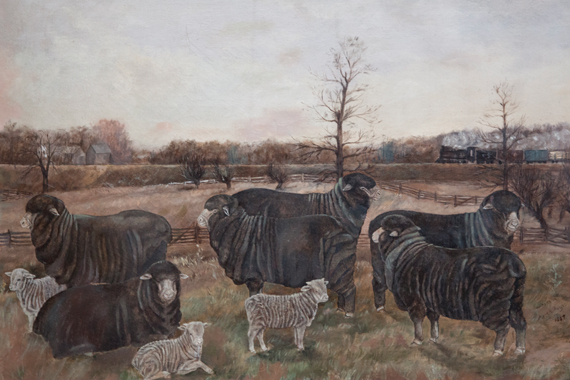 Some say that history is a series of stories, but at the Grand Blanc Heritage Museum, history is a collection of artifacts. Under the direction of Dan Harrett, the Grand Blanc Heritage Association has curated historical items from the community since 1972. My City visited the beautifully maintained museum, located within the historic First Congregational Church, where Dan demonstrated the use of, and explained the significance of many apparatus that have long since fallen out of use or knowledge. The scene above was painted by Mattie Blanch Aurand in 1888, when she was only 19 years old. “This painting is unique for several reasons,” said Dan, “but primarily because Mattie was a young girl and servant of a prominent local farmer named Charles Stuart. It is very doubtful that she could have had any formal artistic training, and so the piece is very special because it’s the work of a natural talent. Secondly, the approximate location of this scene is where Grand Blanc Motor Cars now sits, and if you look out toward the railroad tracks, the scene has not really changed much, aside from the sheep!”

While timber was certainly an important industry in Genesee County, agriculture was the primary occupation of most of the population in the 19th century, and Grand Blanc was a small farming town. “To this day,” Dan reported, “nearly 30 percent of Genesee County land is devoted to agricultural use.” Many tools commonly used by farmers in the years before the automobile are related to animal husbandry and farming, but some instruments, like the schnitzelbank, or shaving horse, was used to make other wooden tools before the invention of the vice.

While men toiled outside, growing crops and raising animals to feed their families, women worked in the home, handling the day-to-day operations of cooking and cleaning. As technology progressed throughout the 19th century, chores became easier. The washing machine was one invention that reduced a woman’s work considerably. Although early washers still had to be filled and agitated by hand, this machine was considered so valuable in lessening the work of washing that it was advertised to “turn drudgery into pastime.”

One of early America’s most iconic scenes is the one-room schoolhouse. In Grand Blanc’s earliest days, one-room schoolhouses were a common site, as the school had to be within walking distance of its students. As an indicator of America’s mobilization in the 20th century, Grand Blanc became Michigan’s first consolidated school system in 1904. Horse-drawn buses were eventually replaced by motorized buses to pick up children who could not walk the distance. School was held in a three-room building at the corner of Saginaw and Bush Streets that burned down in 1920. In 1922, the Perry Center as it’s known now was constructed to replace the school building.

Video games, YouTube, Netflix: none of these forms of entertainment existed in the pioneer days. Grand Blanc citizens in the early 20th century had to content themselves with simpler pastimes, including music and dance. Player pianos – self-playing pianos operated by foot pumping – were an enormously popular form of music between 1890 and 1930, because, as Dan Harrett says, “the quality of the music no longer depended on the skill of the player.” After a donation by one of its members, the GBHA refurbished and now displays a working 1922 Ferrand player piano that visitors can play, with an impressive collection of vintage and new song rolls to choose from. Sale of player pianos reached a peak in 1924, but as the quality of phonographs improved in the 20s, the popularity of player pianos experienced a steep decline, and the stock market crash of 1929 all but wiped out the companies that produced them.

Today, the Grand Blanc Historical Association’s collection allows visitors to peek into the past by seeing the tools and amenities used by Grand Blanc citizens in the days of yore.

See more photos HERE, or purchase photos from this story by going HERE and selecting the “GB Museum” category.