The tree is decorated, the cocoa is hot, the sweaters are ugly and Christmas music streams throughout the house. A lovely fire crackles on the hearth while the family gathers around the table for Christmas dinner. In America, the table is set with standard fare that usually includes a turkey or ham as a main dish with mashed potatoes and gravy, cranberry sauce, vegetables and biscuits. Fruitcake, sugar cookies or a decadent chocolate pie waits as dessert. To deviate would be to disappoint – and who would want to deviate, anyway? It’s our kind of meal and it’s delicious; however, to the rest of the world, the American holiday dinner would be an exception to the rule.

The Christmas holiday is celebrated world-round with the majority of countries serving up a different dinner spread depending on food availability and custom. If you are looking to do something less traditional this year, why not sample some of the fine (and definitely different) Christmas dinners from around the world? 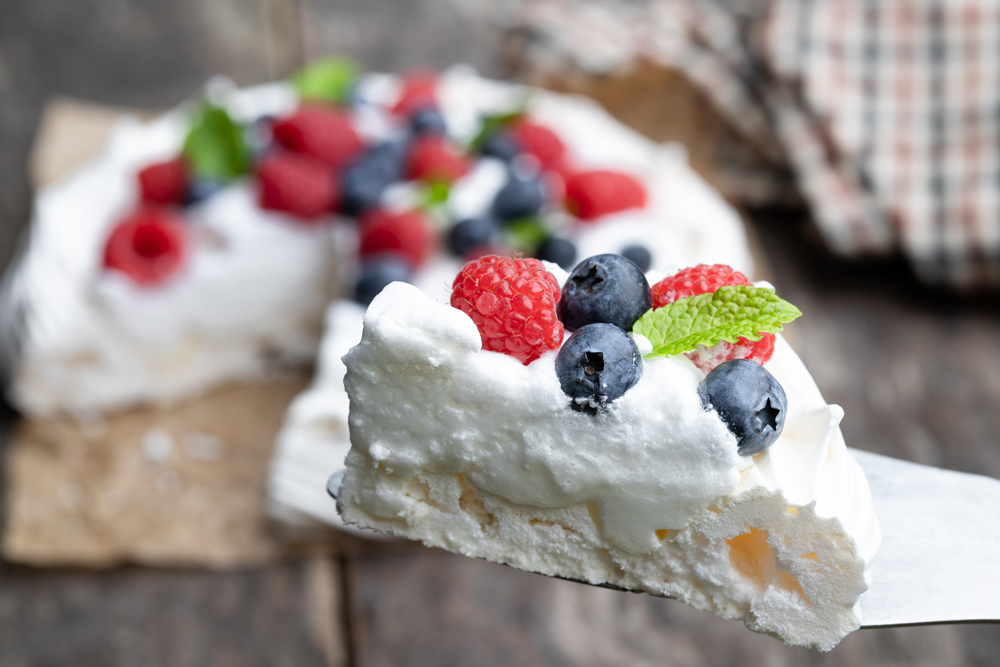 In the land Down Under, Christmas is celebrated in the summer months with barbecue, cold cuts, lamb, sausage or ham. Dishes also include sea fare such as oysters, prawns and lobster. Everything gets washed down with a cold beer or other brew. For dessert, the Aussies break out the Christmas Pavlova, a meringue-based cake filled with whipped cream and garnished with fruit. The dinner tends to be a light and fun affair. 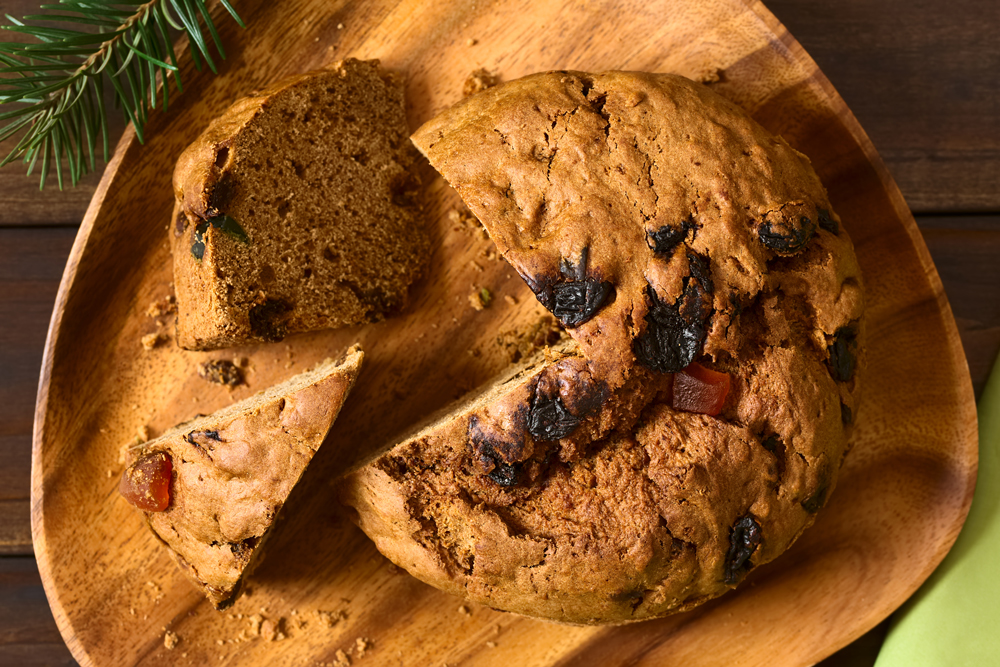 In Chile, the traditional Christmas dinner includes barbecue with roasted turkey or chicken. As a side dish, Chileans enjoy Cazuela de Ave, a special chicken soup. After a long and delicious meal, it’s time for dessert – a traditional bread stuffed with candied fruit called Pan de Pascua, is served. Other desserts include Cola de Mono, a beverage made with coffee, milk, liquor and cinnamon, and Ponche de Chirimoya, a traditional Christmas cookie. 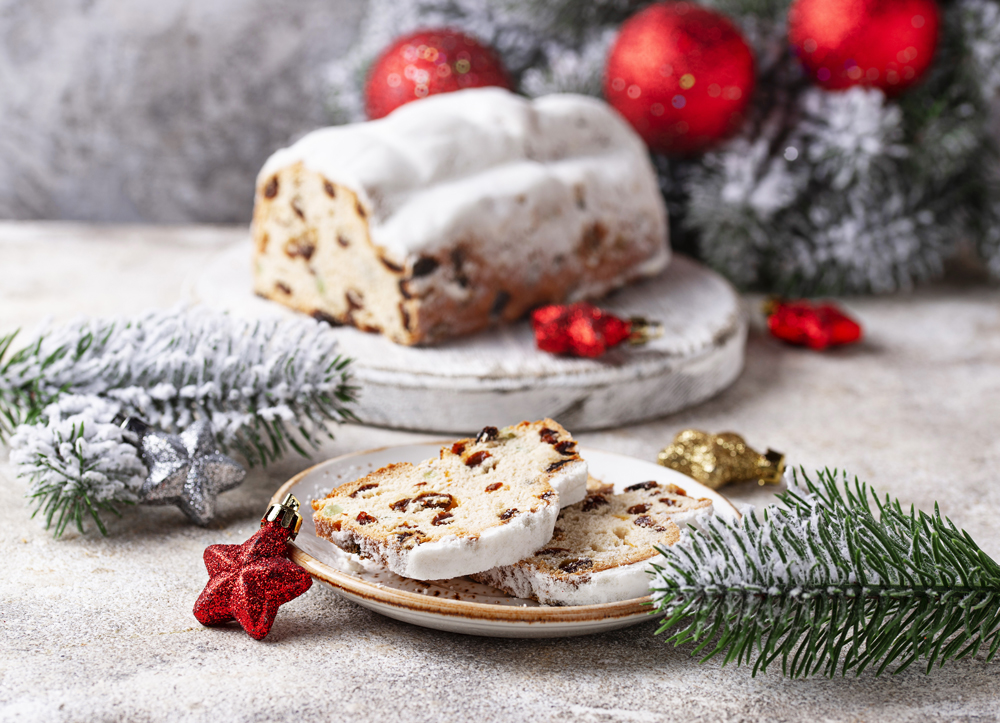 A traditional German Christmas dinner features a main dish of rabbit, goose or duck, accompanied by cabbage, potato dumplings and apple-sausage stuffing. When it’s time for dessert, Germans will partake of stollen, one of the country’s most loved dishes. The loaf of sweetened bread is similar to a fruitcake and recognized around the world as one of the best holiday desserts. 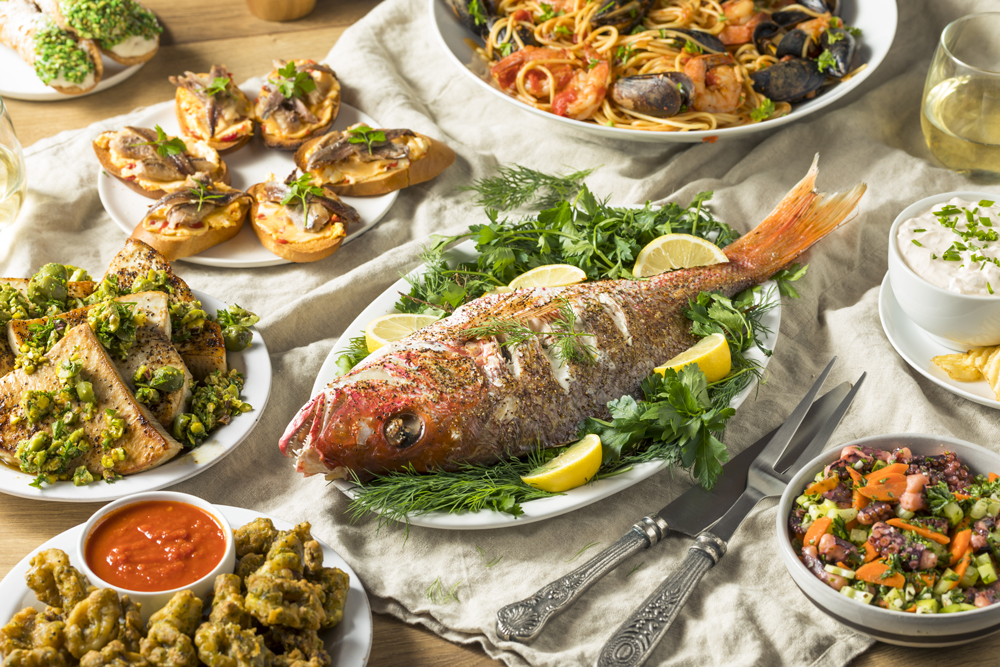 In Italy, the most famous Christmas tradition is known as the Feast of the Seven Fishes. The seven-course dinner features a multitude of maritime morsels. One of the oldest Italian traditions, the feast includes dishes such as baked fish, grilled fish, fish with fennel and olives, seafood pasta, fish tartare, marinated anchovies and wild sea bass soup. Other dishes may feature octopus, clams, mussels and eel. For dessert, you can’t go wrong with the classic Italian tiramisu. 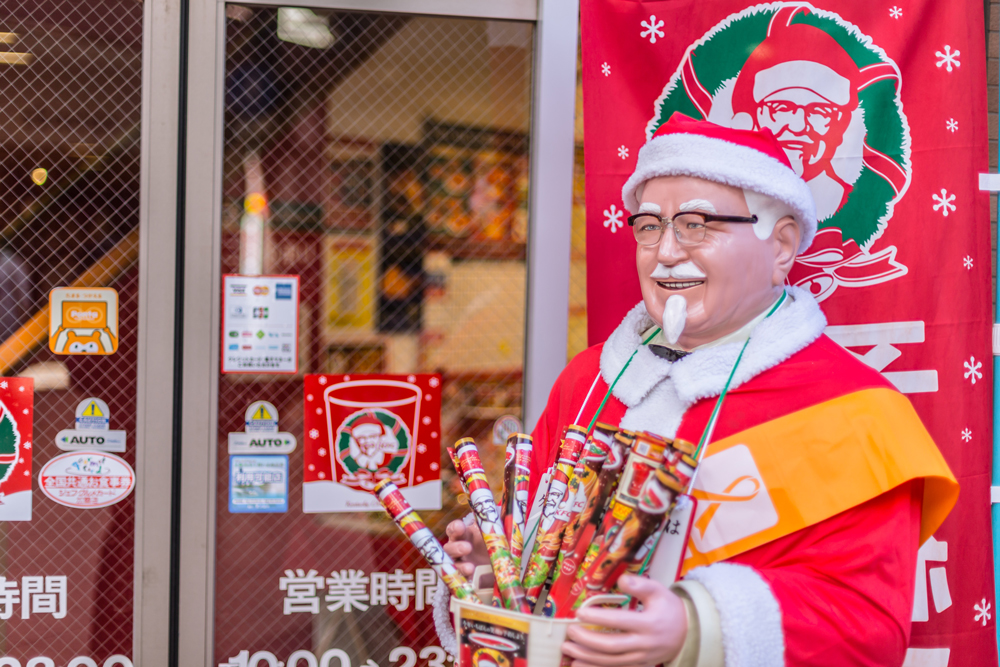 Since 1974, Japan’s main Christmas dinner dish has been a big ol’ bucket of Kentucky Fried Chicken. KFC’s highly successful “Kentucky for Christmas” campaign created such a demand for the chicken that families must place orders more than a month in advance. For those who forgot, fried chicken can be found in almost every department and convenience store. After consuming their KFC, the Japanese indulge in a decadent Christmas cake for dessert and wash it all down with hot saké (rice wine). 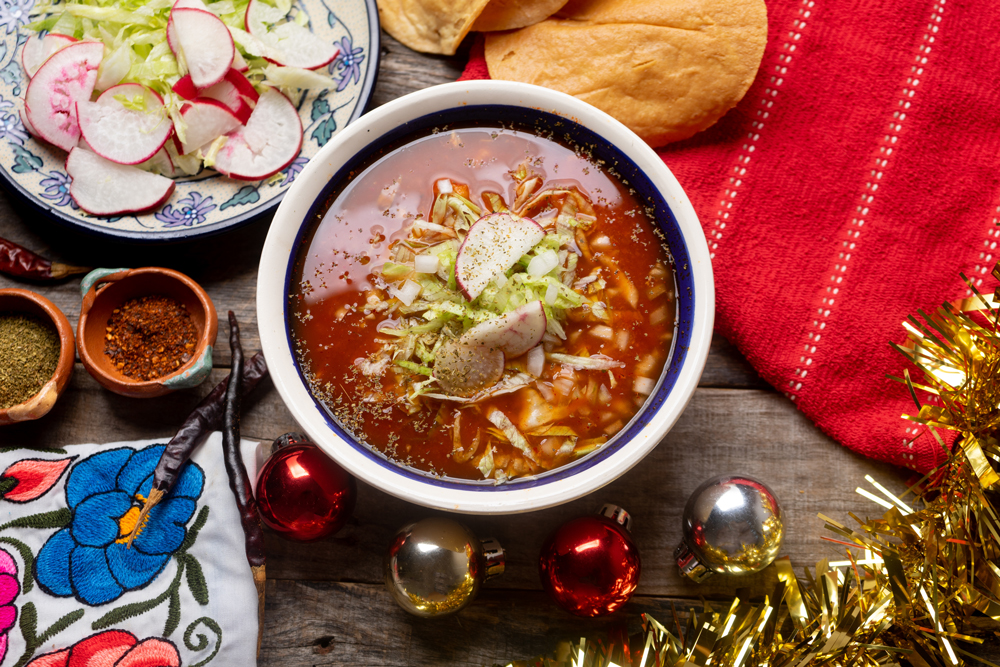 Looking to spice up your holiday dinner? Look no further than our neighbors to the south. Traditionally, the Mexican Christmas dinner offers an entirely new take on the season. Tamales are the main attraction and it is common for families to host a large tamalada, or tamale-making party, leading up to Christmas Day. More must-have entrées are a pork and chicken soup called pozole and a stew comprised of dried cod fish, peppers, olives and garlic called Bacalao a la Vizcaina. 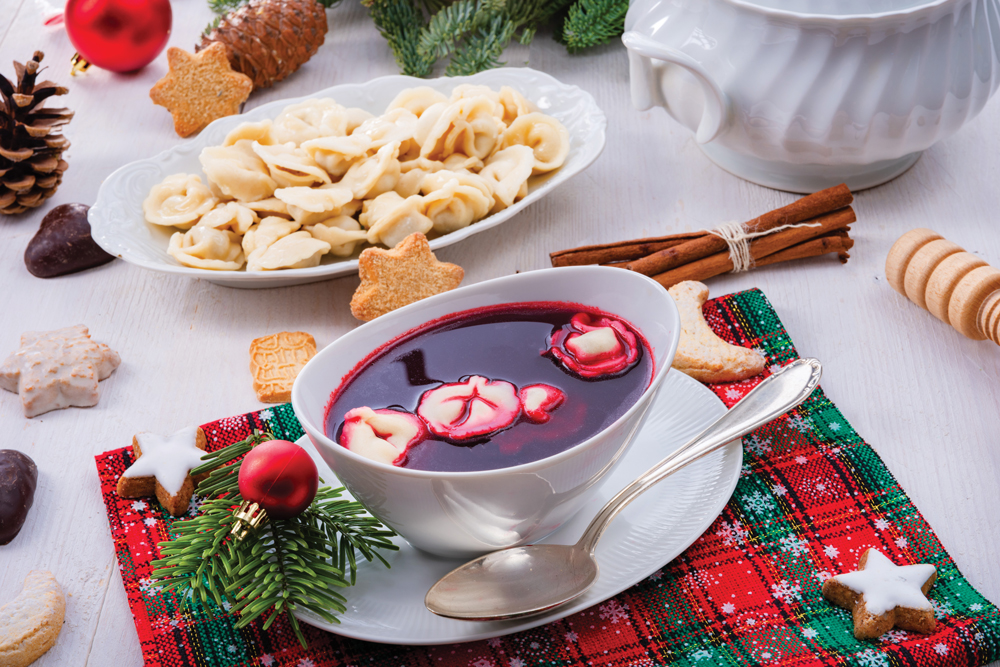 In Poland, the dinner is enjoyed on Christmas Eve and it is quite an event. The 12-course meal features traditional dishes that represent the 12 apostles and includes multicultural aspects. The menu begins with barszcz, a beetroot soup, also known as red borscht. The second is a mushroom soup and then a fish course – carp with hot sauerkraut. The other dishes are: Jewish-style carp; herring with sour apples; pierogi stuffed with mushrooms, braised sauerkraut; golabki, or cabbage rolls; kutia, a mixture of wheat grains, poppy seeds and dried fruits soaked in red wine; piernik (Polish gingerbread); a dried fruit compote, and poppyseed cake. 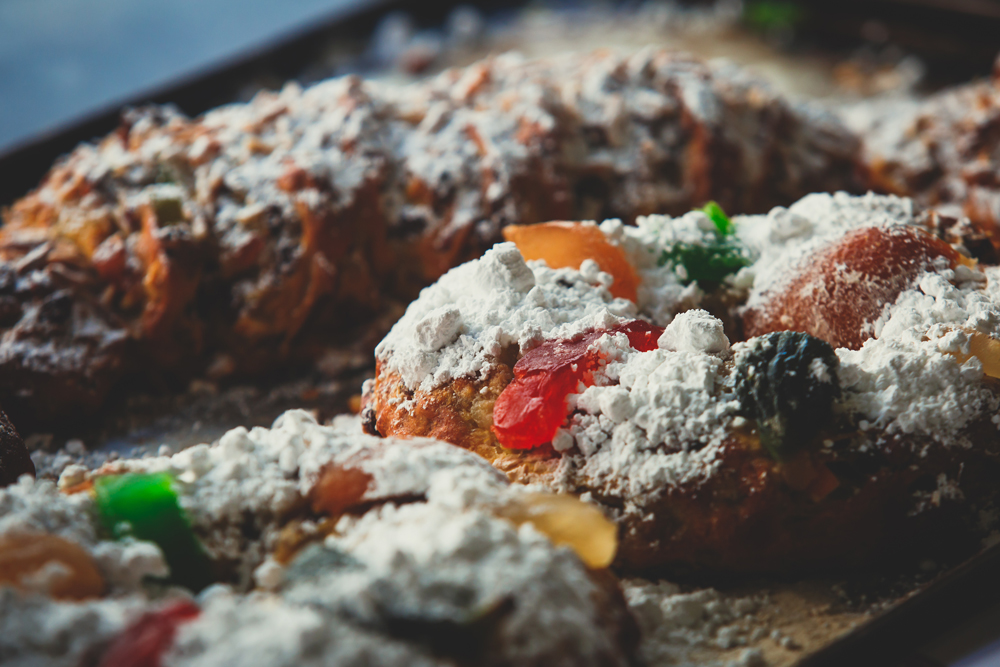 In Portugal, the Christmas Eve meal is called Consoada and mostly consists of codfish with green vegetables and boiled potatoes. The dinner’s highlight, however, is the ending. Dominating the dessert table are traditional Bolo Rei (a candied fruit-and-nut-filled cake) and Bolo Rainha (the cake without candied fruit). Also consumed are filhoses, fried dough covered in sugar and cinnamon; and broa, small sweets made from egg yolk and sweet potato. 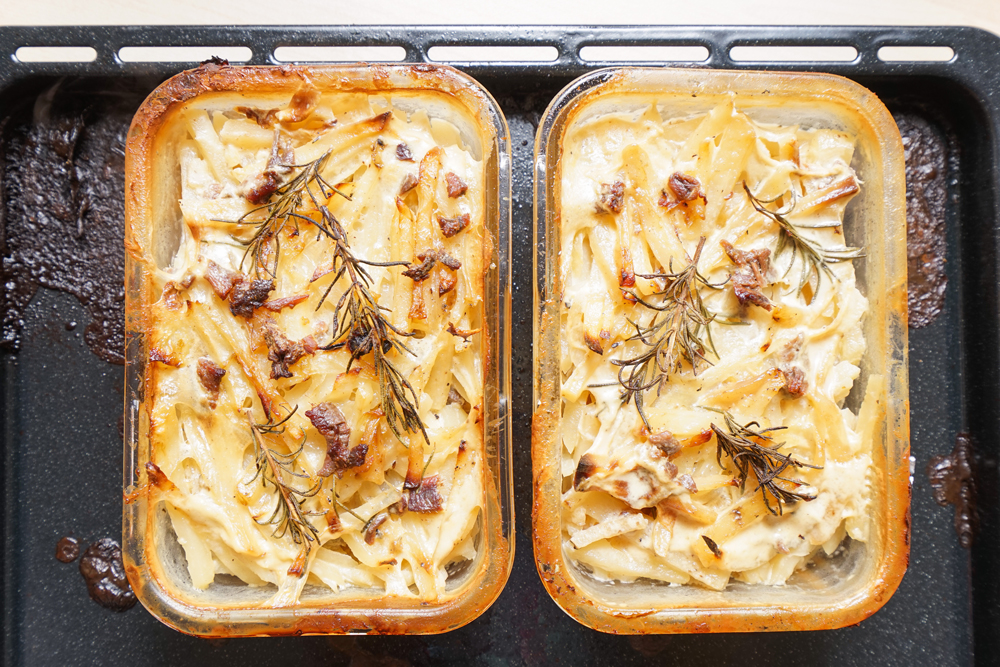 The Swedes celebrate Christmas with julbord – a buffet dinner consisting of fish, cold cuts, ham and sausage. Other buffet staples include an egg and anchovy mixture called gubbrora, homemade liver paté, wort-flavored rye bread and pickled herring. The Swedish meal will also include a meatball and potato casserole called janssons frestelse. After everyone has had their fill, they enjoy desserts of saffron buns or rice pudding. 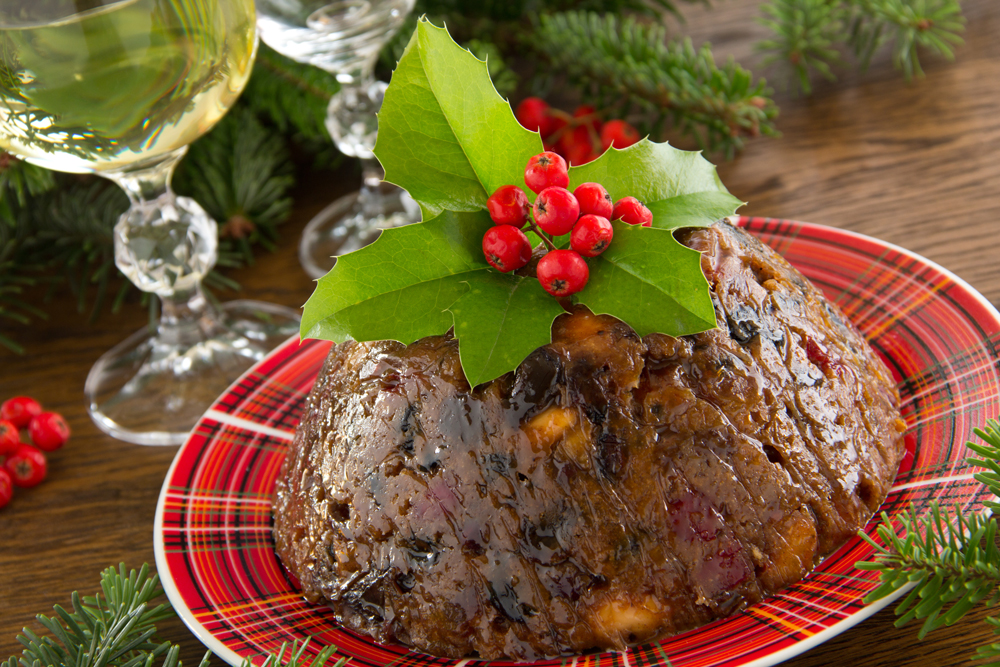 The star of the British Christmas dinner is something we are most familiar with: the turkey. However, unlike Americans, the British would rather top the bird with sausages than fill it with stuffing. Meat is on the platter in the UK, as side dishes often include prawns and mince-meat pie. Other dishes include parsnips, Brussels sprouts, stuffing, cranberry sauce and pigs in blankets. The fruit-packed Christmas pudding, often loaded with cranberries, cherries, pears and more, is often the highlighted dessert.