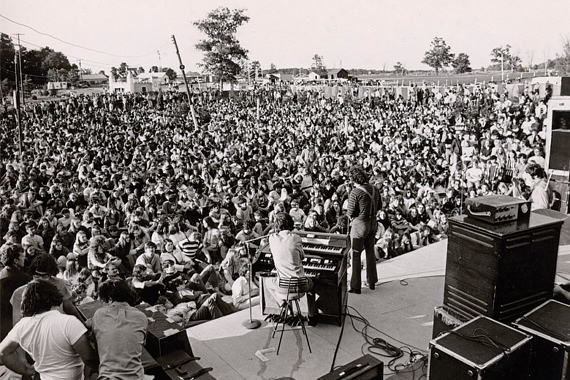 As the summer of ’69 moved along after our first Sherwood Forest “Wild Wednesday” concert in Davison, I started promoting regular live shows at the Center Building in Lapeer, the Owosso Armory, the Saginaw Auditorium, The “Big Wheel” Roller Rink in Bay City and the Midland County Fairgrounds.

Opening for British power trio Cream at Detroit’s Grande Ballroom, Joe Walsh with his James Gang out of Cleveland would soon form Barnstorm and perform “Rocky Mountain High” for the first time before a live audience at Sherwood Forest.

The musical counterculture represented by all the Rock & Roll we played and presented drew its greatest emotional influence from events unfolding far beyond our powerful WTAC signal. In Southeast Asia, the Tet Offensive had proven costly to Communist forces with a high loss of life, but had been a major factor in turning American opinion ever more firmly against the war. Rallies against the conflict were being staged almost weekly at Wilson Park in the heart of Downtown Flint.

On the 20th of July, we all watched in awe as Neil Armstrong stepped onto the moon.

As fall arrived, work on the Sherwood Forest hall was nearly finished and a “Grand Opening Concert” was planned for the third Sunday in October. Who to book for the show? I had only one group in mind. I’d first seen the band at Delta College near Saginaw in late January and worked with them for the first time at the Foxy Lady in Bay City a few months later. The club had a capacity for 800 and 1,200 were packed inside, with another 500 turned away at the door.

The road crew had arrived hours earlier. A towering wall of Marshall speaker cabinets stood behind five microphones, four guitar amps and a raised drum set. The sound system stretched across the entire length of the stage and from floor to ceiling. Lighting racks surrounded the equipment area and scaffolding covered with additional speakers jutted out from the stage at almost every angle. Directly across the room were mounted three elevated super-trooper spotlights, each with a separate operator.

At that instant a whining, screaming, thundering, supersonic roar literally shook the walls of the cinder-block building as guitar players Fred Smith and Wayne Kramer hit the opening chords of “Ramblin’ Rose.”

Restraint unleashed, the audience jumped up and down for well over an hour, undulating as one with the pulsating beat. After the group finished and left the stage, ecstatic applause continued unabated for ten full minutes. The MC5 did no encores.

They were the best live Rock & Roll act I’d ever seen.

John Sinclair, manager of The MC5, had graduated from Davison High School where his mother still taught English. John had earned substantial notoriety from his encounters with the law and widely publicized comments on the same, none of them complimentary to authority figures. The Davison City and Township Police Departments were especially sensitive to the enraged ramblings of this native son.

At 8pm: “Brothers and Sisters, I want to see a sea of hands out there!” Police were patiently in wait.

The band had started saving their best for last after considerable controversy was generated by the standard inclusion of an infamous expletive when introducing their biggest hit, “Kick Out The Jams,” the radio version of which ended with the words, “Brother and Sister.” But this was live rock and roll.

Fifty helmeted, riot-geared Township Police officers rushed through the front doors and worked their way slowly toward the stage. As with many great battle plans, the execution of the police maneuver encountered a number of surprises.

Although the crowd was enormous, everyone seemed more curious than concerned as the officers stormed the hall (“waded tentatively into” would be more honestly descriptive.) It took them at least five minutes to get through the crowd. The MC5 finished “Kick Out the Jams” with 55 seconds to spare. I took the microphone and walked to the front of the stage.

“Ladies and Gentlemen, The MC5!” There was a resumption of raucous applause.

“Ladies and Gentlemen,” I continued, “We have some visitors tonight. Let’s hear it for the police!” The crowd cheered wildly.

By later that night and the following day, extended coverage was featured on both major Flint television stations and in the Flint Journal. The MC5 episode and corresponding media coverage had put Sherwood Forest irrevocably on the map.

The next Friday was Halloween. We decided to promote a relatively unknown group from Phoenix, AZ who had moved to Michigan and were working out of Detroit. They sounded pretty “spooky” to me and had already established a significant word-of-mouth following after only a few appearances. The lead singer claimed to be a witch who was burned at the stake and had come back from the dead. He was the real-life son of a southern preacher. The singer’s name was Alice.

“Halloween Night with Alice Cooper” drew a capacity crowd and was repeated at a triumphant New Year’s Eve performance that ushered in a new decade.

January ’70 brought Mitch Ryder and his new group “Detroit” to Sherwood Forest. They played all the old stuff like “Devil with the Blue Dress On” and some new material including “Rock ‘n Roll”, a hit single bringing Mitch back to fame and fortune.

Saturday nights started late and extended far into Sunday morning for many members of Flint’s African-American community. The Giant Ballroom on N. Saginaw Street had gained regional prominence as being THE black “after hours” club north of Detroit. In February, as a prelude to a forthcoming Sherwood Forest appearance, I booked George Clinton with The Parliament and Funkadelic as an “After Hours WTAC Cabaret Showcase Performance.

On April 12, “The Stooges” came to play at Sherwood Forest. Lead singer James Osterberg was almost the valedictorian of his senior class in Ann Arbor. He eventually moved in with John Sinclair and the White Panthers at their commune on Hill St. and helped form a band called “The Stooges.” Manic comedy became dangerous weirdness, transforming into frightening chaos, changing to raw depravity, shifting to laughable lewdness, transcending into utter madness and concluding with the most disturbing kind of electrified shock-rock imaginable. James “Iggy” Osterberg was extraordinary.

In the very next issue of Creem Magazine, Dave Marsh offered an extensive feature story on the concert and described my concluding narrative as “sounding just like Chris Schenkle on ABC’s Wide World of Sports as I described Iggy’s semi-garroted removal from the stage. It became quite the story in Michigan music circles.

A new “Wild Wednesday” was scheduled for June 24th at Sherwood Forest. We would present 12 groups in 12 hours outdoors from noon ’til Midnight with “Twin Concert Stages” and no recorded music, no pause or intermission.

Regular Sunday indoor concerts resumed on October 11 with Detroit’s Frijid Pink and Third Power. Frijid Pink had sold over two million copies of “House of The Rising Sun” over the course of the year, and was the first Detroit rock group to score a No. 1 global hit. They were heading to Australia the following week. On WTAC, the No. 1 single was “War” by Edwin Starr.

The struggle in Vietnam continued.

In early December, Paul McCartney filed a writ in the London High Court seeking legal dissolution of his “The Beatles” partnership.

On Christmas Night, Ann Arbor’s Brownsville Station drew a capacity crowd at Sherwood Forest. Their “Rock & Roll Holiday” was hitting the national charts. Alice Cooper returned on New Year’s Eve as “Baby New Year” and had plenty to celebrate. His recording of “Love it to Death” had become a major, unexpected smash in Canada. It had a new name and was gaining airplay everywhere! “Eighteen” was already No. 1 on WTAC.