IF Karl Collyer could, he would eliminate iceberg lettuce altogether. “It has no taste and it’s mostly water,” he laughs. “I’d replace it with  avorful, vitamin and nutrient-packed microgreens.”

Collyer, who currently lives on Flint’s Eastside and “loves the innovative urban farming culture going on in his neighborhood,” grew up on a six acre farm in Monroe, then after serving in the U.S. Navy, settled in Argentine before moving to Flint. Collyer has revived the soil, growing and agricultural skills learned in his youth.

In fact, Collyer is putting those skills to use in a new way. In February, he became a cuttingedge,indoor, urban, vertical-growing microgreens farmer – who owns and operates Happy Little Greens Farm inside the former Mid-Michigan Lock and Safe building at 1831 Bennett Avenue. He describes his location as “right in the middle of the green zone at Franklin and Bennett.” His journey began after participating in the University of Michigan-Flint Outreach Center’s (IN) Innovation Incubator “On the Road” program, where he earned first place in their pitch contest. 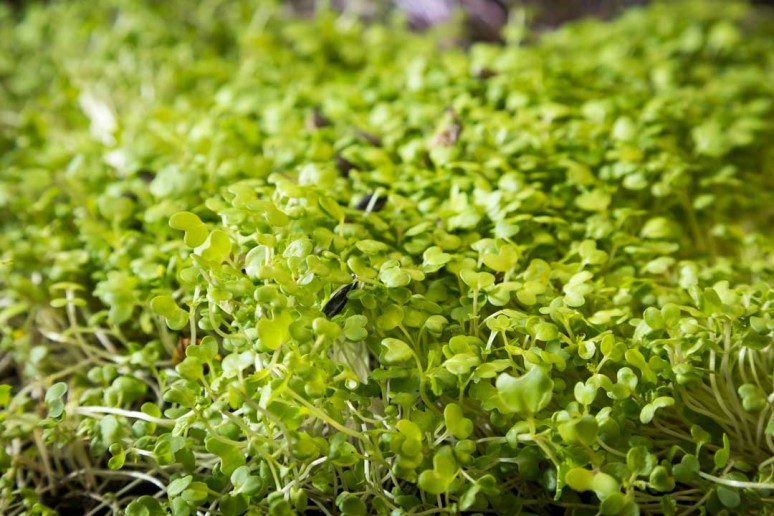 In as little as nine months, Collyer’s newly formed “green” passion-turned-business has gotten noticed by people like Redwood Steakhouse & Brewery managing partner and executive chef, Luis Fernandes, who is helping him reach his goal of replacing iceberg lettuce with sustainably-grown alternatives.

“I buy his microsprouts and use them in my sushi bar, salads, on sandwiches and to garnish steaks. They’re an excellent product with texture,flavor and color,” says Fernandes, who also finds creative ways to incorporate Collyer’s sprouts into the other establishments where he serves food – Elwood’s Restaurant in Burton, 501 Bar and Grill in Downtown Flint, Northern Oaks Brewery in Holly, and Mexico and Italy at the Market, at Flint Farmer’s Market. “I like using the radish, red cabbage and sunflower sprouts; they have wonderful, distinct  avors and give my food and culinary dishes a kick,” says Fernandes. “I find the sprouts I get from Karl are fresher and have a much longer shelf life than theose I previously had shipped from other distributors.”

Collyer points out that “microgreens” is a marketing term for various types of vegetables, based on their size and growth time.  ey grow to about two-to-three inches in about one or two weeks, then they’re cut for packaging.  eir tremendous taste attracts food experts and pleases most palates. For example, the taste of a micro radish is similar to a full-grown radish, but with a little heat. With its horseradish flavor, mustard is a good compliment to wasabi for sushi. Sunflower has an earthy, nutty taste. There are many microgreen varieties and each has their own unique flavor. “With microgreens you get the great taste, high nutrition and the beautiful colors such as magenta, deep purple, crimson and yellow,” explains Collyer. “Microgreens naturally build the taste into the topping of a dish, rather than getting flavor from adding condiments or salad dressing.”

Fernandes also appreciates the swiftness with which he receives his orders from Collyer. “I’m always interested in using local resources,” he says. “I really like that I can place an order with Karl, and in three days, he delivers it to me – in person. I like how he calls to let me know he has five pounds of this or that, and I can choose to order it.” 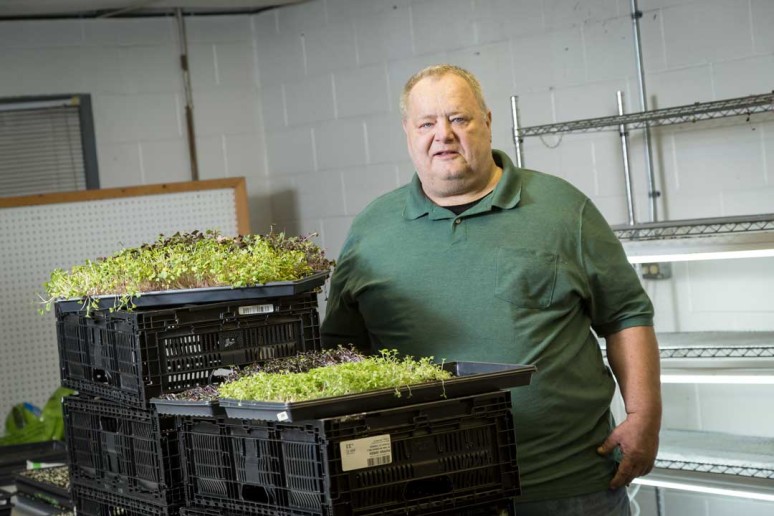 As the recipient of a recent $10,000 grant from the Michigan Good Food Fund, Collyer likes hearing this. He entered the Flint Boot Camp Pitch Competition designed to provide financing to good food initiatives. “I spent three days with industry mentors and experts, like Professor Jay Friedlander, who helped me learn the skills needed to take my businesses to the next level.”

He also won $2,000 in the I-69 Trade Corridor, “Catapult Your Craft Food & Beverage Business Contest,” which awarded a total of $30,000 to assist Michigan entrepreneurs and small business owners with starting or growing their craft food or beverage businesses.

“I’m building relationships with local chefs and white-tablecloth restaurant owners, like Chef John Zehnder of Zehnder’s in Frankenmuth, and helping them have access to nutrient-dense, high-quality foods. I like working with my clients one-on-one,” Collyer says. “Winning the grant money will help me expand growing, obtain new racks, lighting and other equipment to make some headway toward getting healthy foods into a blighted-turned-urban-farming neighborhood.”

Terry Kinize helps build hoop houses – or greenhouse shelters – for similar Flint garden projects, and is a master gardener through the Michigan State University Extension Program. He lives near Collyer on the Eastside and teamed up with him to support his e orts. “What Karl is doing is a good thing,” says Kinzie, who aids Happy Little Greens Farm by supplying knowledge and labor, and helps maximize plot growth by using in-house soil through unique composting measures, and finds ways to cut overhead. “He’s bringing nutrition to a poor community,” Collyer adds. “Growing microgreens is a smart thing to do as a farmer and urban farming helps extend the season. It’s in the beginning stages, but it has the potential to become a viable, year-round business.”

Collyer’s passion for spreading dirt has taken on new meaning in a city actively increasing and developing more healthy, edible food sources and options. “Getting these vegetables into people’s hands is important,” Collyer states. “Ann Arbor and Traverse City have been offering their residents microgreens for some time. I have so much praise for these seeds – microgreens have a nutrient density of  ve to 40 times more than a normal vegetable. They’re loaded with rich vitamins such as A,C, E and keratin properties. Once someone tries microgreens,they’ll never go back to eating iceberg lettuce. They can replace their sandwich and burger toppings, enhance salads and really use them in a variety of ways.”

Collyer hopes to get his harvested greens to longtime Flint businesses such as Halo Burger and Big John’s Steak and Onion, and Chef Fernandes is o ering to do cooking demonstrations using microgreens to help educate residents and other food connoisseurs about their value.

“It’s a dietary bene t to the community,” Kinzie says.

Adds Collyer, “it’s local, innovative, and a cost-saving way to bring good food to the Flint community. And, thankfully, it’s not iceberg lettuce.” 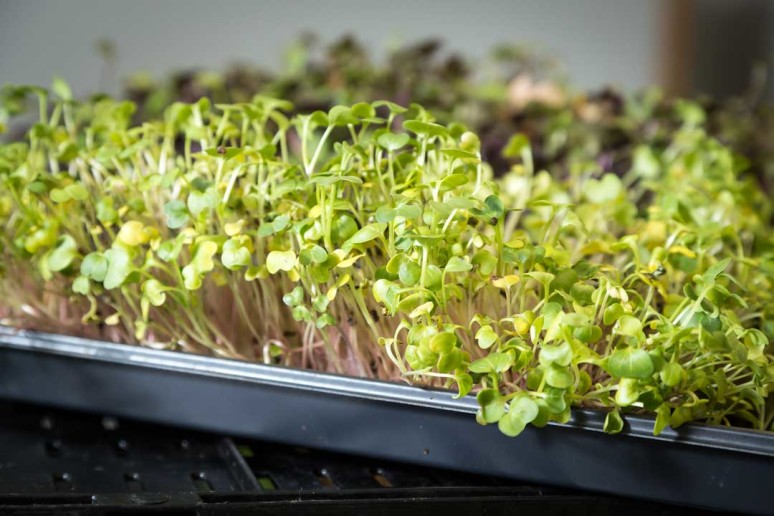