Happy Curmudgeons is a project a long time coming. Dave Hamilton (lead singer, guitarist) was playing in a band in the 80s called the Angel-Headed Hipsters, and during that time, had the opportunity to meet the legendary Lou Reed of The Velvet Underground. “Lou Reed had told me, ‘You’re a very good songwriter. Keep doing what you’re doing and believe in yourself. If you stick with that, you’ll end up doing something’,” says Hamilton. He took Reed’s words to heart and did just that. “About twenty years later, I decided to get back to it,” he says. Hamilton was still playing music and doing session work during that time, but knew he wanted to put out his own music. He spent a year in California, returning to the Flint area in 2008, where he ran into Jeff Warner (guitar), who has also played with Gene Pool and the Pole Barn Rebels, as well as his current band, The Outfit. The two began writing and soon brought on Amy Dixon-Lavery to contribute additional vocals. Thus, Happy Curmudgeons were officially born on August 1, 2015. 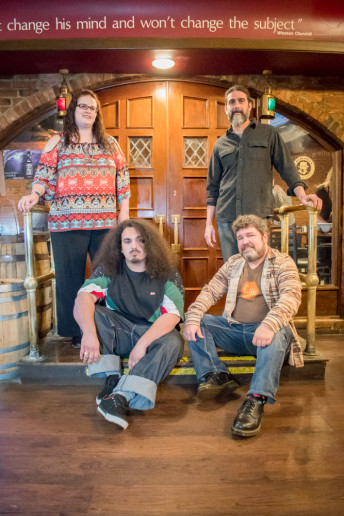 The band’s debut record, Meant 2 Be, was released December 1 of 2017. A number of other professional musicians contributed to the record, including Takashi Iio (bass), Rick Beamon (drums), Keith Leonard (bass), Jay “Tumbleweed” Burrs (harmonica, harp), Nate Harasim (keys, piano, percussion, programming), and Marlow Ray Morgan (vocals). The band brought in a wide array of musicians to flesh out their 11-track debut, giving the record a broad range of styles. Meant 2 Be takes inspiration from classic rock staples such as Grateful Dead, Allman Brothers, The Rolling Stones, and Bob Dylan.

The album opens with “Bar Hoppin’,” an infectious tune with rock n’ roll riffs to get the crowd into it. “Soulsville” is a driving track about Chicago with Jeff Taboloff laying down sizzling saxophone. “It’s about riding around Chicago on the ‘L’ and how vibrant that city is, how connected to blues music and music in general it is,” says Hamilton.

The folky acoustic title track mellows things out with Amy Dixon-Lavery on vocals, perfect for singing and humming along to. “It’s about things that are kismet, about fate,” says Hamilton. “It felt like the proper name for the album, because without everybody’s help, this wouldn’t have gotten launched and now, it’s getting its own wings.” Lavery adds, “We all came together by chance, and created this project that I know has been a longtime dream of Dave’s.” “Third Coast” follows a similar folky path, singing about Michigan’s own third coast, as well as returning back home after being on the road. “‘Third Coast’ is probably my favorite track on the album,” says Jay “Tumbleweed” Burrs.

“It took twenty years to get here, but it’s better to
do it than to delay it and never get to that point.”
– Dave Hamilton

Hamilton calls the record’s fifth track, “Carnal Boogie,” a “blues tune with sexual overtones.” “Burn Sugar Burn” keeps the energy flowing and features local vocalist, Marlow Ray Morgan. This track’s inspiration comes from a unique place, as well: Hamilton’s dreams. “I dreamed the two verses and a week later, I dreamed the chorus and put it together,” he says. “Seasons” is another track Hamilton conjured from his dreams. Each verse is about a different season, where Hamilton sings about the rapid passing of time. “It took twenty years to get here, but it’s better to do it than to delay it and never get to that point,” he says. “Seasons” sticks out on the record in a good way – Hamilton describes it as an easy-listening track. It is one of most beautifully arranged pieces of music on Meant 2 Be. 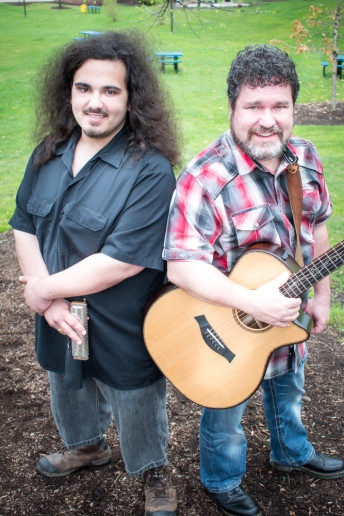 As a whole, Meant 2 Be showcases a multitude of styles and genres on one record, including everything from rock to blues and folk. The album has only been out since December, but it’s already found much success. The band has over 40,000 listeners on Spotify, their top track “Idle Time” with 67,000 plays. Radio stations around the nation have picked up Happy Curmudgeons, and the band recently found out a number of TV shows are interested in using their music. Hamilton is especially proud that Born This Way on A&E, a show featuring adults born with Down syndrome, is interested, as well. The band was surprised to find that even NASCAR had also reached out to use their music.

To keep that momentum going, Happy Curmudgeons have already begun creating new material. Burrs is working on several blues numbers, and Lavery is writing lyrics for the band for the first time with a new song called “Second Chances” that they hope to record soon. Hamilton describes the new material as “blues and country with that classic rock flavor.”

The band has several gigs on the horizon, including a Flint show on July 21. They will hit other Michigan spots soon, including Kalamazoo and Bellaire. Shows are in the works for Cincinnati, Columbus and Ft. Wayne, IN. Details will be announced soon.

To keep up with Happy Curmudgeons follow them at:
facebook.com/HappyCurmudgeons/
happycurmudgeons.bandcamp.com/releases

Meant 2 Be is also available on Spotify, iTunes and Amazon.