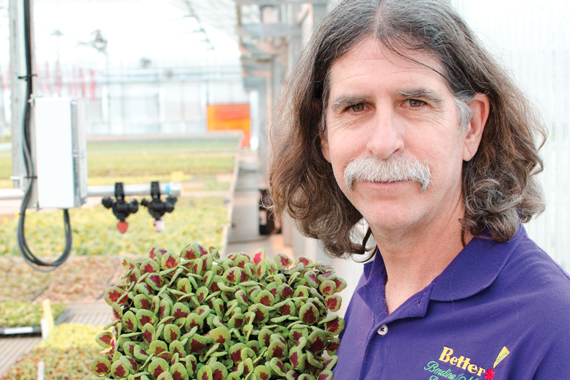 Dave Redoutey, or Flower Dave as he is widely known in the community, lives a wholesome, simple life growing flowers. The son of two master gardeners, Dave’s mother would often send him outside when he was little to weed the flower garden, a task he enjoyed rather than begrudged. Later, he turned an old swing set into a greenhouse and used the flowers he grew there to make combo pots for the ladies on his block. “I just loved flowers,” he remembered with a laugh. Little did he know that his lifelong love of flowers would lead to a career with Bordine’s Nursery and send him traveling all around the country and beyond.

Dave grew up in Livonia and moved to Holly in 1982. He worked in a factory for several years, and though he found it unfulfilling, this circumstance gave him an opportunity to review his life goals. “I decided I wanted to make a change,” he says, “And I knew I should be working in a field that I love.” The operative word here is field, for what Dave loved was digging in the dirt and planting flowers. He briefly considered opening his own greenhouse, but realizing he didn’t have the business acumen to run his own corporation, he applied for a job at Bordine’s Nursery in the Clarkston area. The only position open at the time was in the maintenance department. “So I took it,” he laughed, saying that sometimes you have to get the door opened to get to where you want to go. With gusto, he dug ditches for the building of a new greenhouse, but he also let the greenhouse manager know that his real interest lay in growing seedlings. Soon, that desire came to fruition. About a year later, he was asked to work at Bordine’s greenhouse in Rochester. “It was there that I started to learn how to grow,” he says.

As he took on new tasks, Dave continued to learn. When asked if he wanted to grow seedlings at the Clarkston facility (the very greenhouse he helped build), Dave acquiesced, setting a goal to learn as much as he could about the growing process that fascinated him. In 1998, Bordine’s hired a world-renowned consultant, Dr. David Koranski. After his first encounter with the specialist, Dave said he was frustrated and disheartened. “I was doing everything wrong, and I wondered if I’d ever learn to do it correctly,” he remembered, “but I didn’t give up.” Dave watched carefully as Dr. Koranski worked to set up Bordine’s planting procedures. “It was like cooking a recipe, almost,” says Dave looking back. The doctor soon became Flower Dave’s mentor, teacher and good friend. “I traveled all over the country with him,” says Dave. They visited successful greenhouses to learn more about the planting process and to share their knowledge with others. Some of the greenhouses they visited included Green Circle Growers in Ohio and Goldsmith Seeds in California, which was the largest seed company in the U.S. at the time. Having made connections all around the world, they traveled in 2008 to greenhouses in the Netherlands, which Dave describes as being “ahead of the rest of the planting world by leaps and bounds.” They also traveled to Metrolina, a 150-acre greenhouse in North Carolina. “I’ve been all over in an effort to learn more. We are always trying to improve,” said Dave.

My City Magazine was treated to a tour of Bordine’s greenhouses in Grand Blanc, where Flower Dave is a plug grower, overseeing much of the process. The nursery is now Bordine’s headquarters, with 10-15 acres of greenhouses, a retail shop and 175 employees. Fiona Brinks, Vice President of the company, is charged with picking all of the varieties of flowers to be grown. And the growing process at Bordine’s can only be described as a well-oiled machine. For this writer, a little bit of spring was in the air after seeing a brightly lit, warm and humid greenhouse filled with thousands of brilliant geraniums being watered by automated sprayers.

The busiest month for Dave is March, when the growing process is in full swing. Bordine’s propagates more than seven to twelve million plants per year. “It’s a very stressful job,” he laughed. And Dave doesn’t do it alone. The process requires the help of an assistant and several temporary employees. Shawne Radell, Operations Manager, facilitates all the moving, pruning and shipping of the plants. “It takes a large team to accomplish all this,” says Dave, adding that in just one day, Shawne coordinated the moving of one million plants. Growing season begins when cuttings from thousands of different flower and plant varieties from all around the world arrive at nursery. While most of the seeding process is automated – from putting soil in the plug pans to seeding, watering and fertilizing – the cuttings are planted by hand. “This is where it starts,” says Dave. Once the plugs are germinated, they are moved to different locations varying in temperature and lighting, depending on the plant’s stage of development. “Every year we have a plan,” says Dave, “We know where each plant is going and which greenhouse it will be grown in.”

Bordine’s is well known for its Green Initiative, and Flower Dave is always looking for ways to be more environmentally friendly. He says that LED lighting is “new and upcoming in this industry” and that Bordine’s is looking to switch. The nursery is heated using a biomass boiler and wood chips from local sources to reduce reliance on fossil fuel. Other Green Initiatives include water filtration and re-use, a fertilizer injector that only adds fertilizer after the water is tested, and automated watering booms to help conserve water, Dave reports. Another method that reduces the need for pesticides is utilizing beneficial insects that kill pests.

After such a brutal and prolonged winter, many people are looking forward to warm weather, sunshine and the reemergence of color in their gardens. Bordine’s Nursery will not disappoint when they open on April 1 for the season. Dave says he feels a personal sense of accomplishment when all goes well. “It’s more than just a job. I have a vested interest in this!” he exclaimed. Dave’s own flower garden is proof of his passion, as his spare time at home is spent planting flowers, that is, when he’s not out riding his Harley. “My yard is a hodgepodge of every flower you can imagine,” he laughed. At the end of the day, Dave is content with a job well done. “I like to think that I’m bringing happiness to people,” he said humbly.

See more photos HERE, or purchase photos from this story by going HERE and selecting the “Flower Dave” category.