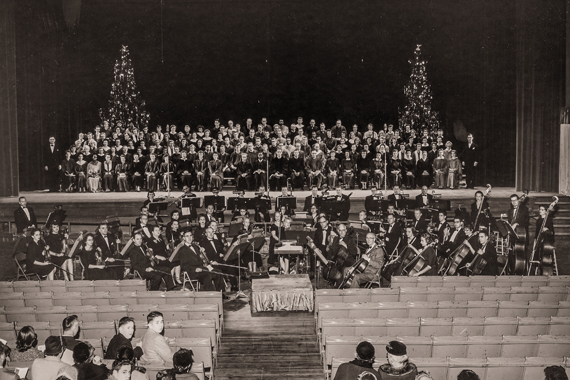 Prompted by the many musical festivals that have kept the city humming over the summer, as well as the commencement of a new season at the Cultural Center this fall, My City Magazine met with Helen Bas, author of the soon-to-be-released book, entitled FSO: 96 Years of Music, to discover more about the history of the Flint Institute of Music, a mainstay in the city’s musical life.

The Flint Institute of Music is a truly astonishing body of culture and education. Originally begun as a local chorale, today’s FIM is comprised of three branches that educate and entertain through the mediums of music, dance and theatre: The Flint Symphony Orchestra, the Flint School of Performing Arts, and the Flint Youth Theatre.

Although Flint’s musical tradition predates the 20th century, it was the philanthropy of J. Dallas Dort in the early 1900s that gave rise to the FIM as we know it today. In 1913, he formed the Choral Union, which he called “a musical organization … for the benefit of all the people in the city.” Choral music was a popular trend at the time, and at the Choral Union’s first concerts, the longstanding tradition of performing Handel’s Messiah at Christmastime got its start. A few years later in 1917, the Community Music Association— the precursor to the modern-day FIM — was formed, and although the focus was still on choir music, this organization would evolve and grow to include many other musical interests.

As the oldest branch of the FIM, the Flint Symphony Orchestra was begun in 1918 as a volunteer community orchestra, but its popularity was slow to develop, due to the public’s preference for the sounds of brass bands and vocals. George Oscar Bowen was the first music director, and he conducted rehearsals at Saint Paul’s Episcopal Church. In the middle of the century, the burgeoning orchestral movement coincided with the rising popularity of Opera in Flint, and with the leadership of William Wellington Norton between 1921 and 1949, education became a priority of the organization in the form of the youth symphony orchestra. It was not until William C. Byrd became conductor of the orchestra in 1966, however, that the FSO reached a premier level. Under Byrd’s leadership, the orchestra became a professional organization, attracting talented musicians from around the world. Today, the FSO is conducted by the world-famous, Grammy-nominated Maestro, Enrique Diemecke, who will celebrate his 25th anniversary with the FSO this season.

The Flint School for the Performing Arts is one of the country’s largest community schools of music. Dedicated to promoting a lifelong love of music and dance, the FSPA teaches about 3,500 students of all ages each year, from toddlers to senior citizens. Scholarships are widely available, thanks to the community’s support, and the FSPA can boast that some of their pupils have gone on to perform in such prestigious institutions as the New York Philharmonic and the Dayton Ballet. Classes are offered in a dizzying array of musical subjects: lessons for every kind of instrument and in every imaginable genre of dance. The variety of classes along with the talented teaching staff has resulted in a healthy, welcoming environment for anyone who has ever wanted to pursue a dream, or just try something new.

The Flint Youth Theatre, a component of the FIM devoted to the theatrical arts, and in particular those appropriate for families and children, was brought under the umbrella of the FIM in 2009, although it’s been engaging families since 1957. A common misconception about the Flint Youth Theatre is centered on the youth aspect. Not all of the performers are children, and while many of the productions put on by FYT are geared toward children – indeed there is a program called Learning thru Theatre that invites local schools to the performances for free and provides them with post-play activities—there is also an entire series of productions specifically for adults and older teens called Off the Press. These productions are staged readings of the latest plays from Broadway and American Regional Theatre and are followed by a talk-back with the performers and refreshments provided by Fandangles’ restaurant, a longtime FIM supporter. An award-winning, professional theatre group, FYT is a prestigious association whose presentations are moving, engaging and dazzling.

Philanthropy is and always has been the reason for the success of the FIM. J. Dallas Dort instituted one dollar dues for the Community Music Association at its founding in 1917 and personally paid those dues on behalf of his staff. Today, the legacy continues as thousands of loyal supporters make possible the myriad art study programs at the FIM, especially those provided to local children at little to no cost. Seeing Stars! is one tuition assistance program in particular that benefits the FIM financially, helping make the Flint Institute of Music one of the most vibrant cultural institutions in the country.