Michael Littlejohn, 62, is not interested in marketing his artwork. “I have a distaste for it,” he says. “I don’t put a lot of stock in pushing into the art scene … I’ve always had a day job so that, at night, I could come home and indulge myself with my work.” Littlejohn’s entire house is his art studio, with a painting room upstairs where he spends hours on the acrylic paintings that have been his artistic mainstay, while the bottom floor is a dedicated art space, as well, featuring his completed work along with workstations for the glass mosaics that have occupied much of his labor for the last three years.

“I started out with drawing, then went into painting. From acrylic, I went into some mixed media. I started looking at the natural world and at discarded objects and discovering what could be made from them. I did a bit of sculpture, discovered CelluClay® (papier mache) and started making molded figures. While I always had an eye for stained glass, I experimented with it about three years ago, and have been on that wagon ever since.” 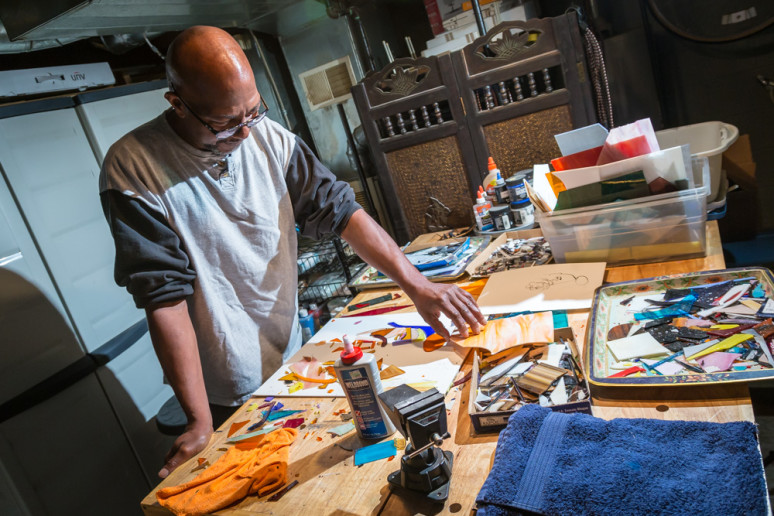 Littlejohn creates his mosaics from sketches, often expressing his long-standing affinity for jazz music and a celebration of the human figure. He says he creates because, “it helps me stay sane and out of trouble.” But, the greatest motivation and influences on his work are what he calls, “small pensive moments; those moments when you see something that would move you.” Littlejohn recalls one of his visits to Downtown Flint to watch the Crim race. “I routinely go to the Crim and I made it out there just to see the Africans come through first, and then just the different faces of individuals coming through. I still have the image in my head of a guy running with the POW flag. I mean, he was by himself, but he had this look … that look with that POW flag – it was almost enough to make my eyes water. It’s those kinds of moments.” 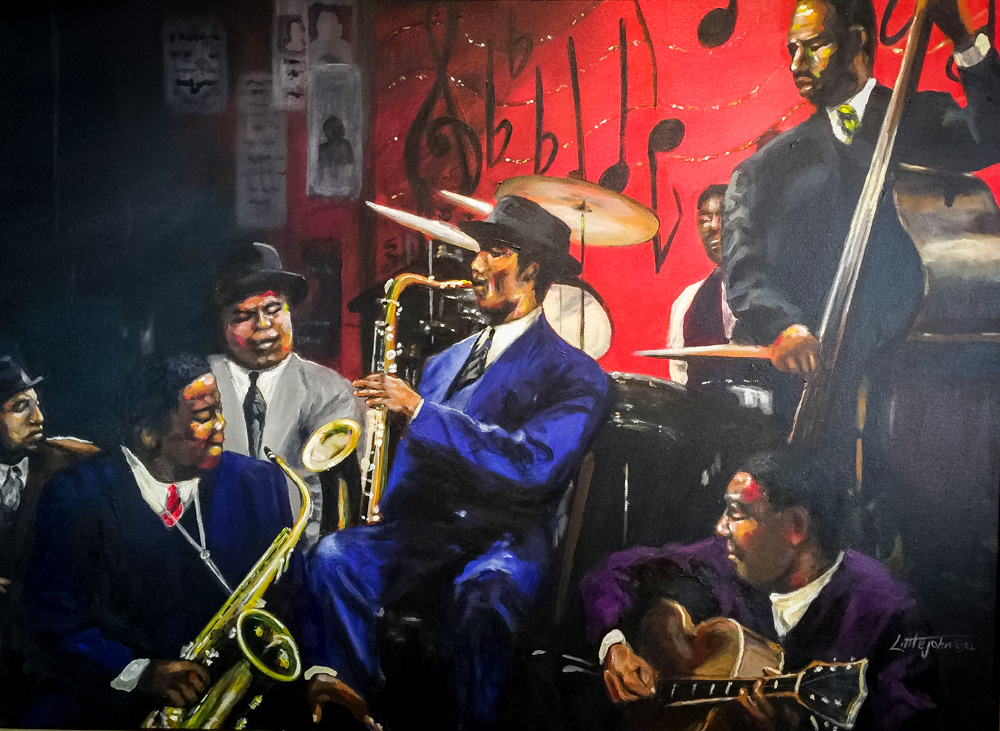 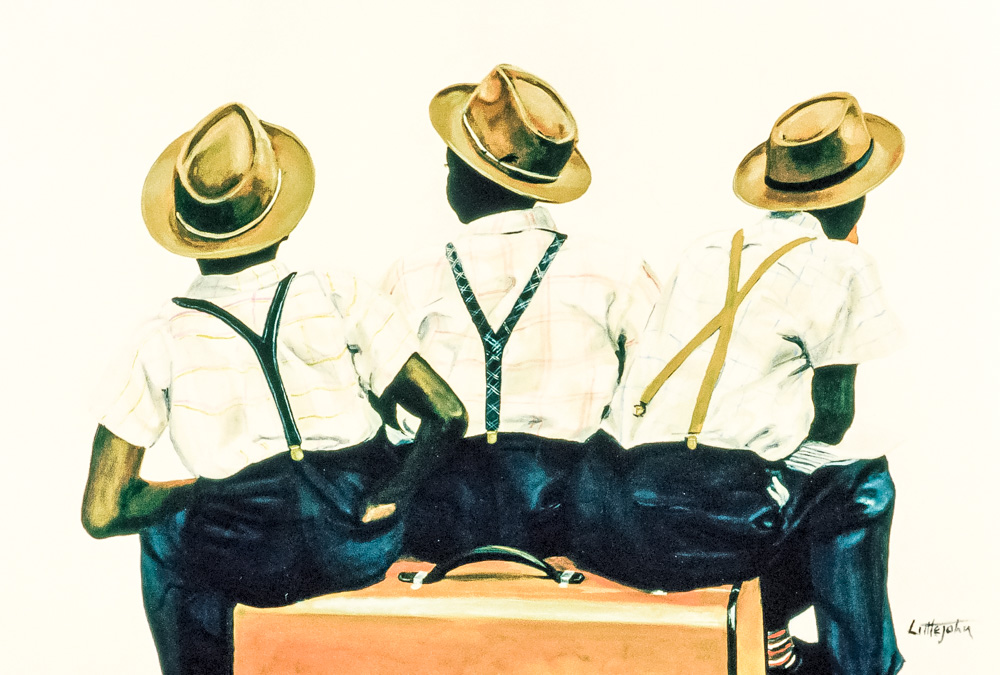 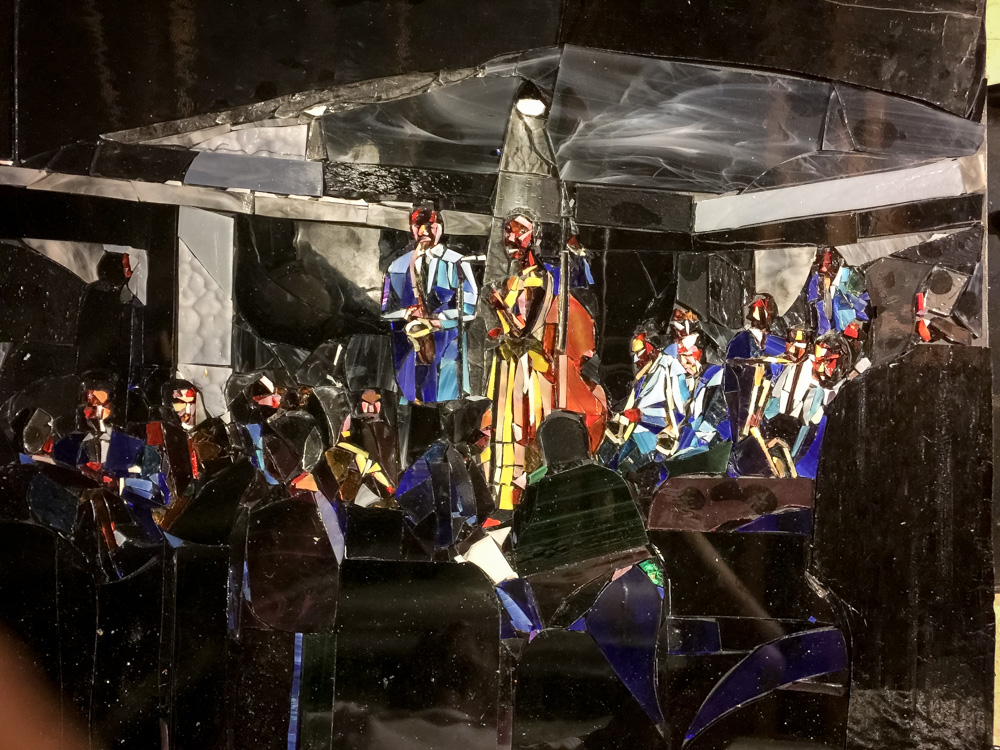 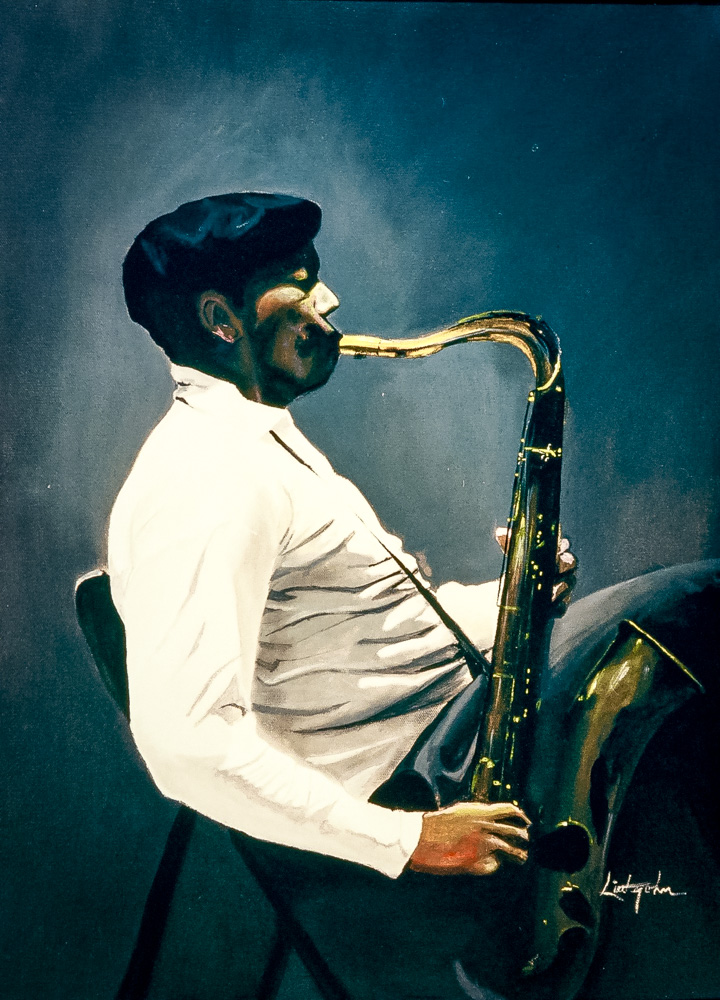 It is also moments like this, in response to his work, that have kept him going. Not only have most of his shows been precipitated by the urging of those around him, but he also has learned much from the reaction to his art when he shows it. “I see how art touches people and I get gratification from that,” he says. Littlejohn has had many moments when his work elicited unexpected responses from viewers. One of those times, he recalls, “I was displaying at a conference center, and had a painting up on an easel, and this woman came out of the auditorium, turned around, looked at it, and started crying. I asked her, ‘what is it that you see?’ and she couldn’t explain it. The painting was called “Buffalo Soldiers” and it really hit home for me how you can never tell how your work is going to affect someone.” Viewers will stop and share entire stories and memories evoked by a piece. “They might ask me what made me do a certain painting, and try to get it out of me; but I ask them to first tell me what they get from it. I wonder what they see.” According to Littlejohn, it is the connection with the viewer that matters. 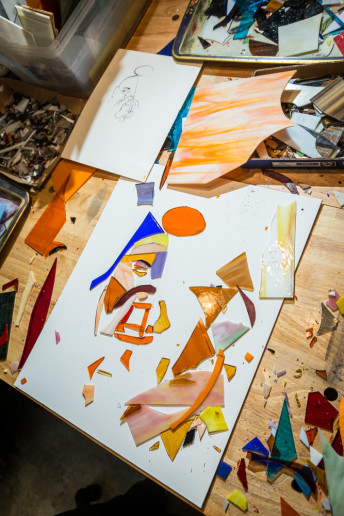 Despite his distaste for marketing his work, he has exhibited at the Greater Flint Arts Council (GFAC) since the 80s. For Littlejohn, there seems to usually be someone encouraging him to show or asking for a commissioned piece. The first time, “someone saw my work and said I needed to get involved with the art community, with GFAC, and so I submitted some pieces – and, boom! Right after that, they gave me a one-man show,” he smiles. “From then, every year for Black History Month, I put something in their show, I’m in the member shows, and now that I’ve gotten into glasswork, I am in their glass show, as well.” Littlejohn’s work has been displayed in the Rotunda in Washington D.C. and was a featured artist at a gallery in Nevada. More recently, he did a show at the Flint Public Library and had plans to exhibit work at St. Paul’s Episcopal Church for October’s 2nd Friday ArtWalk.

When he began creating glass mosaics, he says it was like an abstract approach to things. “I could never really wrap my head around abstract art, but doing glass mosaic gave me that abstractness to something that was real, that was there before, in the sketch of a figure, for example.” The theme of one series of glasswork he completed was plus-sized models. “There are a lot of beautiful women who are plus-sized, and society has a way of eviscerating them – there is too much of that going on. I wanted, in my own way, to celebrate those women. So, I did one … then I did two … and eventually did five,” he laughs. 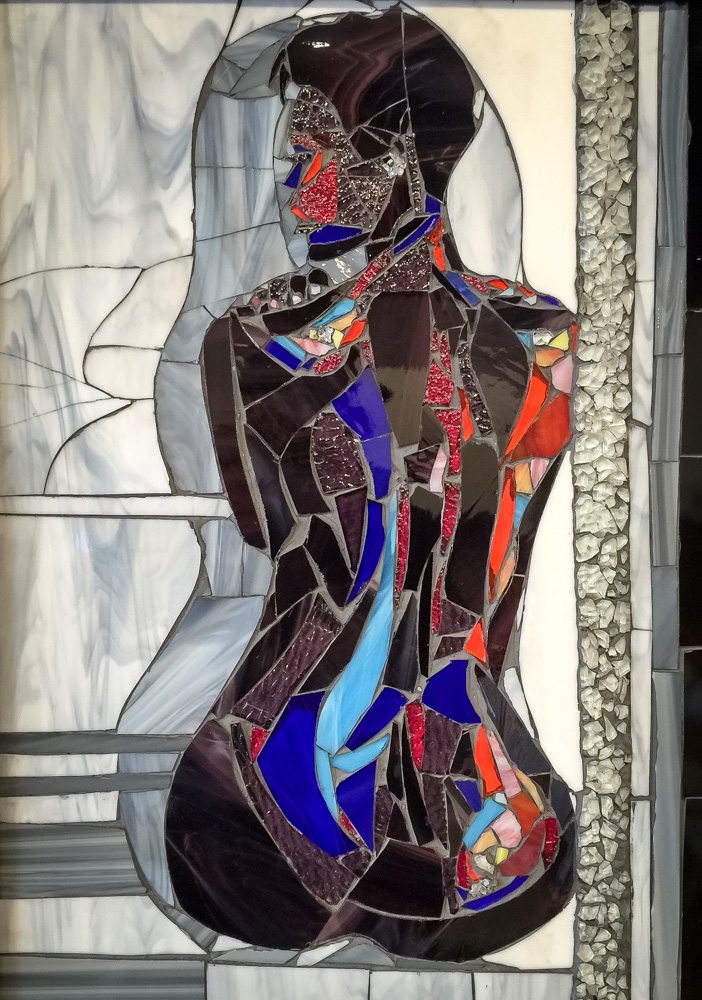 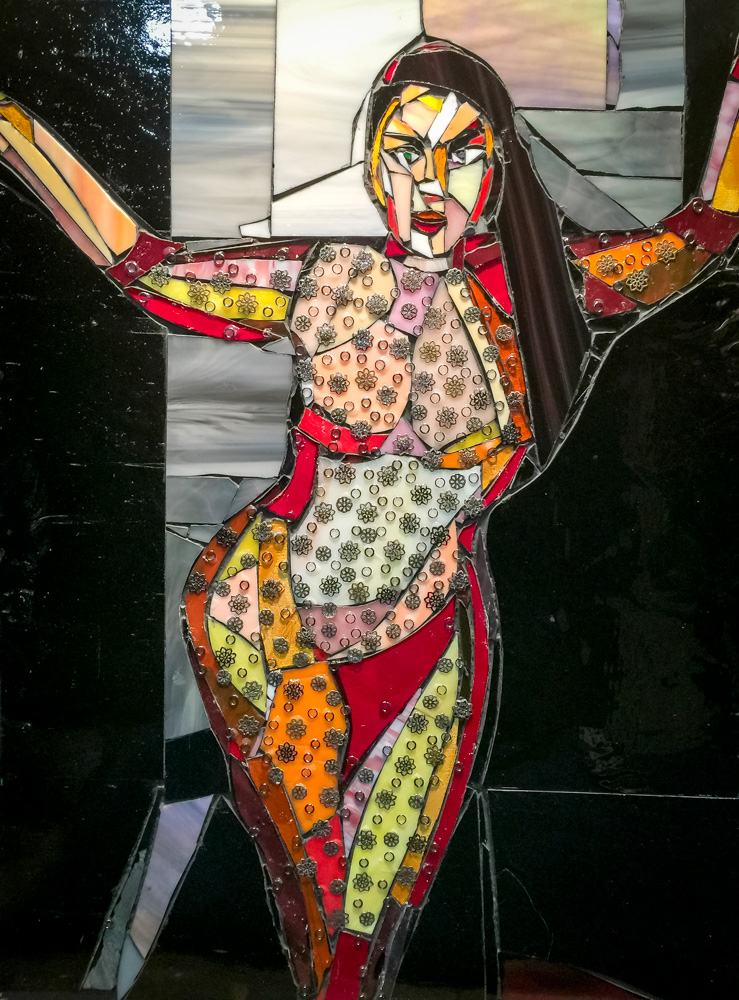 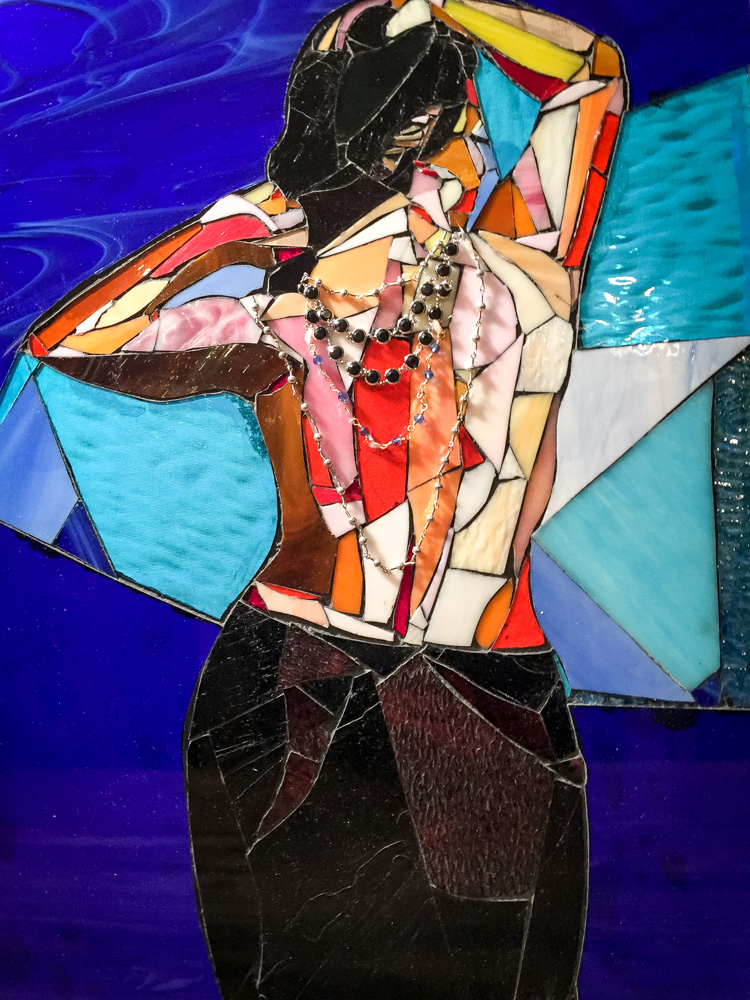 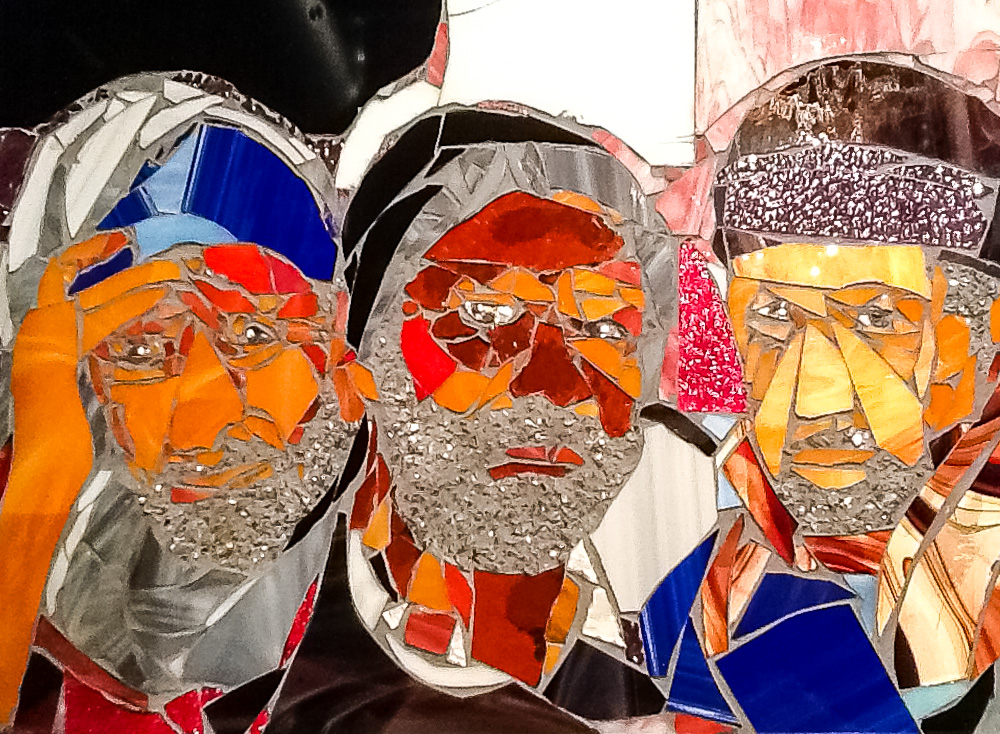 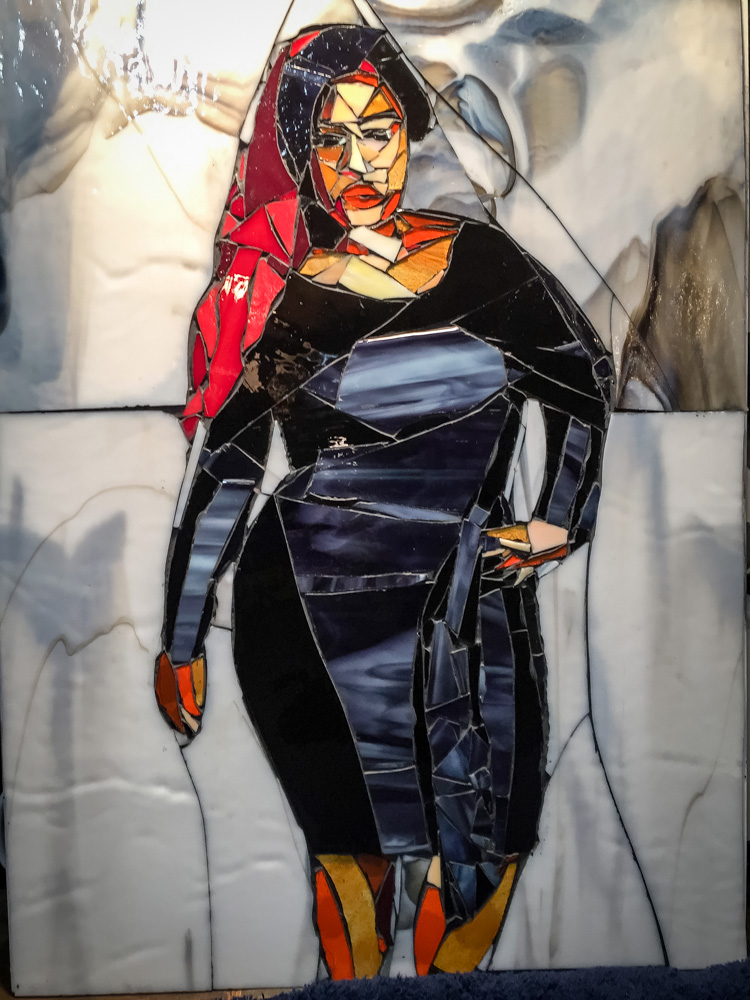 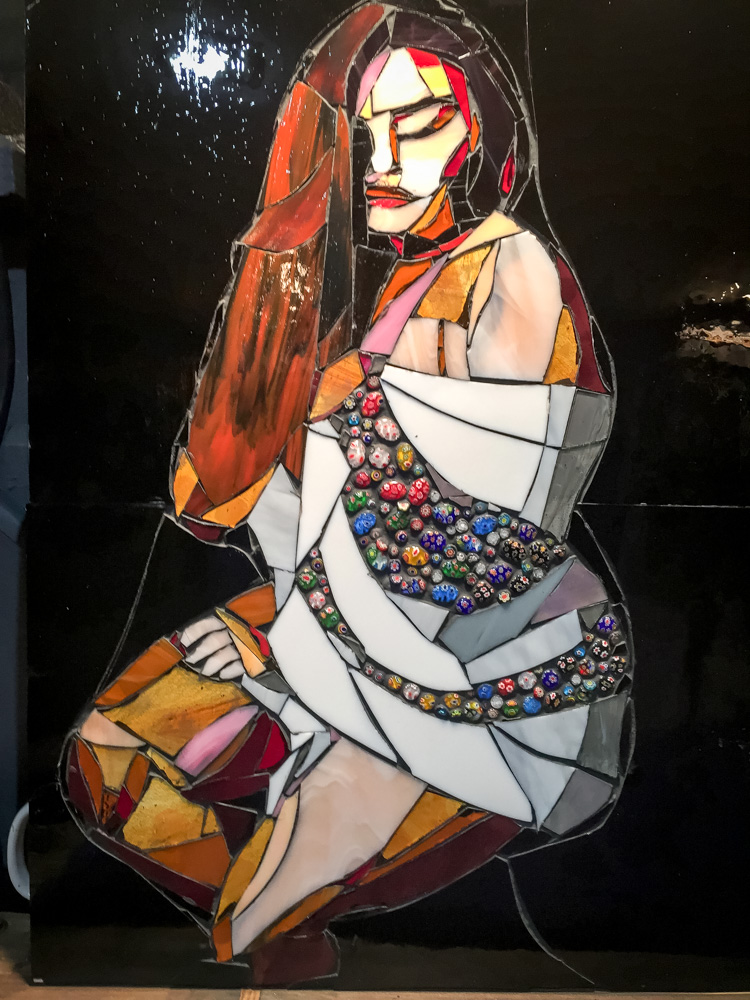 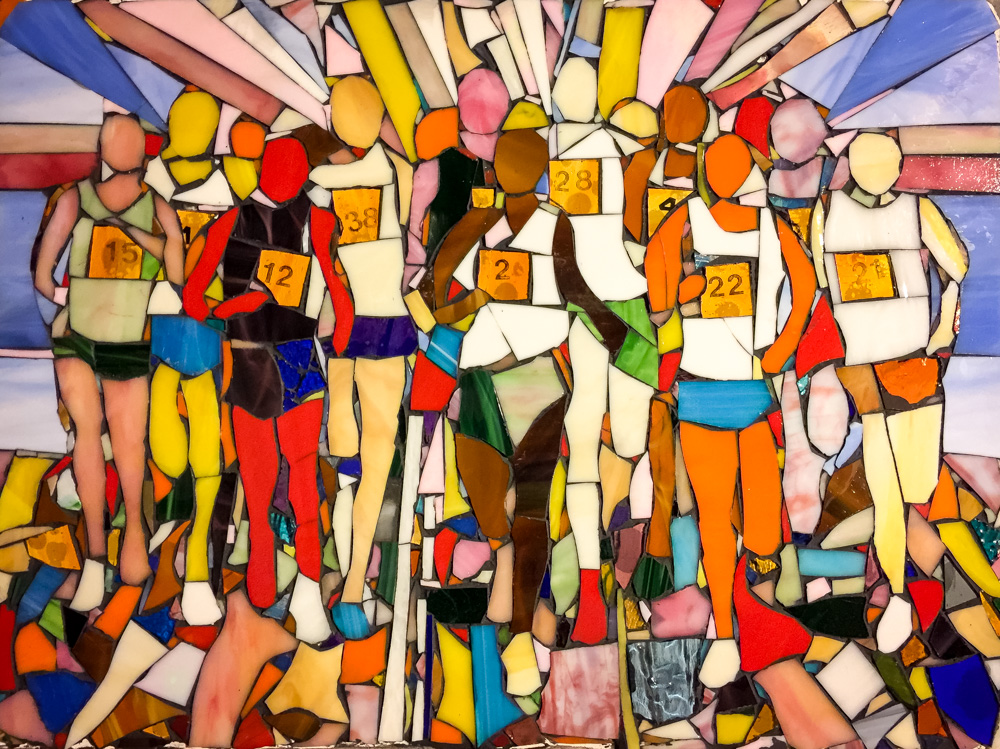 Each glass piece begins as a sketch on either canvas board or plywood board. “You need something that isn’t going to give a whole lot, but also that isn’t too heavy, since these pieces can get really heavy,” he explains. Then he begins cutting sheets of glass into shapes. “I’ve seen other glass artists sand and grind pieces to fit, and to me that creates almost like a realistic painting and I don’t want that. I want the different shapes, the color or the curve, as opposed to making it fit.” Littlejohn will begin with the larger pieces and as the spaces get smaller, he looks into his collection of glass sheets and scraps from previous work, and picks out the right ones. “It’s almost like working on a giant jigsaw puzzle,” he says. After the pieces are glued in, and he has found the perfect glass, the work is then grouted to complete the mosaic.

Although Littlejohn says he has always made art, he never heavily pursued arts education. Born in Connecticut, his family moved to Flint and then back to Connecticut; but, he stayed here. He took art classes through high school and basic art classes in college, as well, while he obtained his Bachelor of Science in Human Services from Ferris State University and a Masters in Counseling from Eastern Michigan University. He describes his relationship with art classes as rocky. “Me and my high school art teacher never got along – she always gave me Cs and Ds,” while a college art teacher wanted to endorse him and was encouraging him to go to art school. 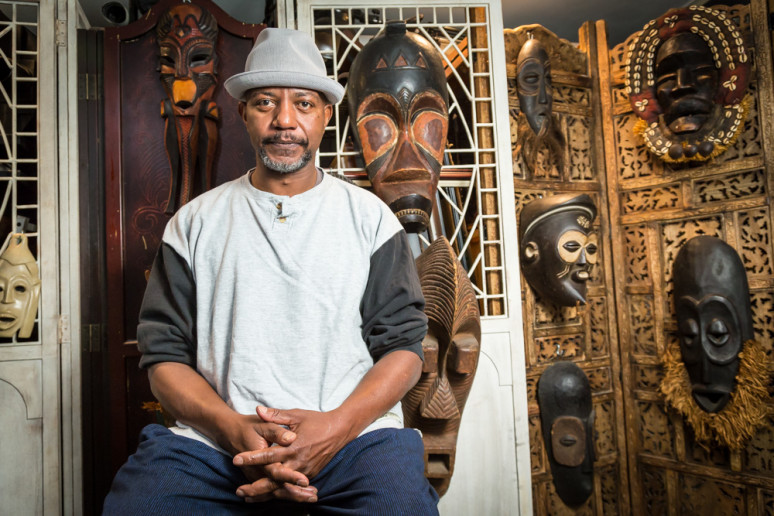