There’s no better way to enjoy the warm weather than dining with family and friends on a deck by the water. These area eateries offer a casual, waterfront experience. 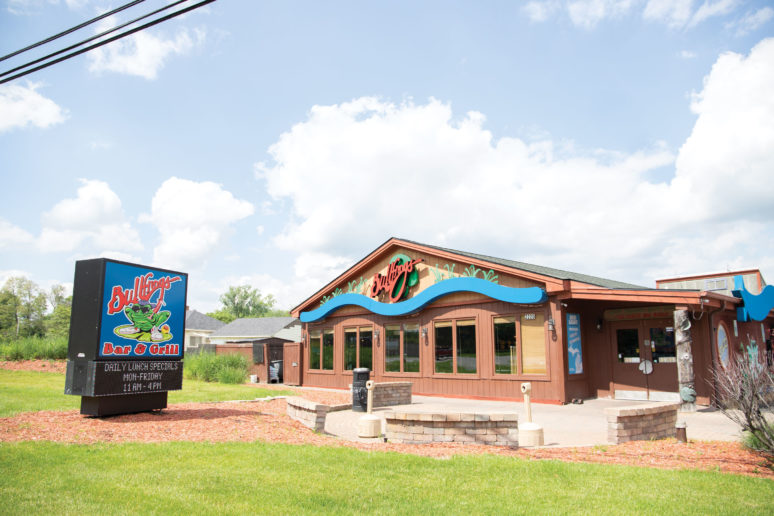 Have you checked out the coolest pad around? The laid-back sports bar offers casual, global fare including American burgers, pizza, festive Mexican and much more, according to General Manager, April Brown. What draws a crowd during the summer is the outdoor patio overlooking Lake Louise. With seating for 120 guests and a full-service Tiki Bar, it is a relaxing place to enjoy a cocktail and some good food.

Diners at Bullfrogs enjoy live music on Fridays and a deejay on Saturdays. While enjoying the music, you can sip one of their special cocktails – maybe Froggy’s Blue Margarita (tequila, Blue Curacao, lime juice, sour and Sprite), or a Froggy Colada. The bar offers 13 beers on tap and a good wine selection, as well.

Bullfrogs Bar & Grill is open for breakfast at 8am on Saturdays and Sundays. “People say we serve the best breakfast in Ortonville,” April reports. “Bring the whole family for some great food and fun!” 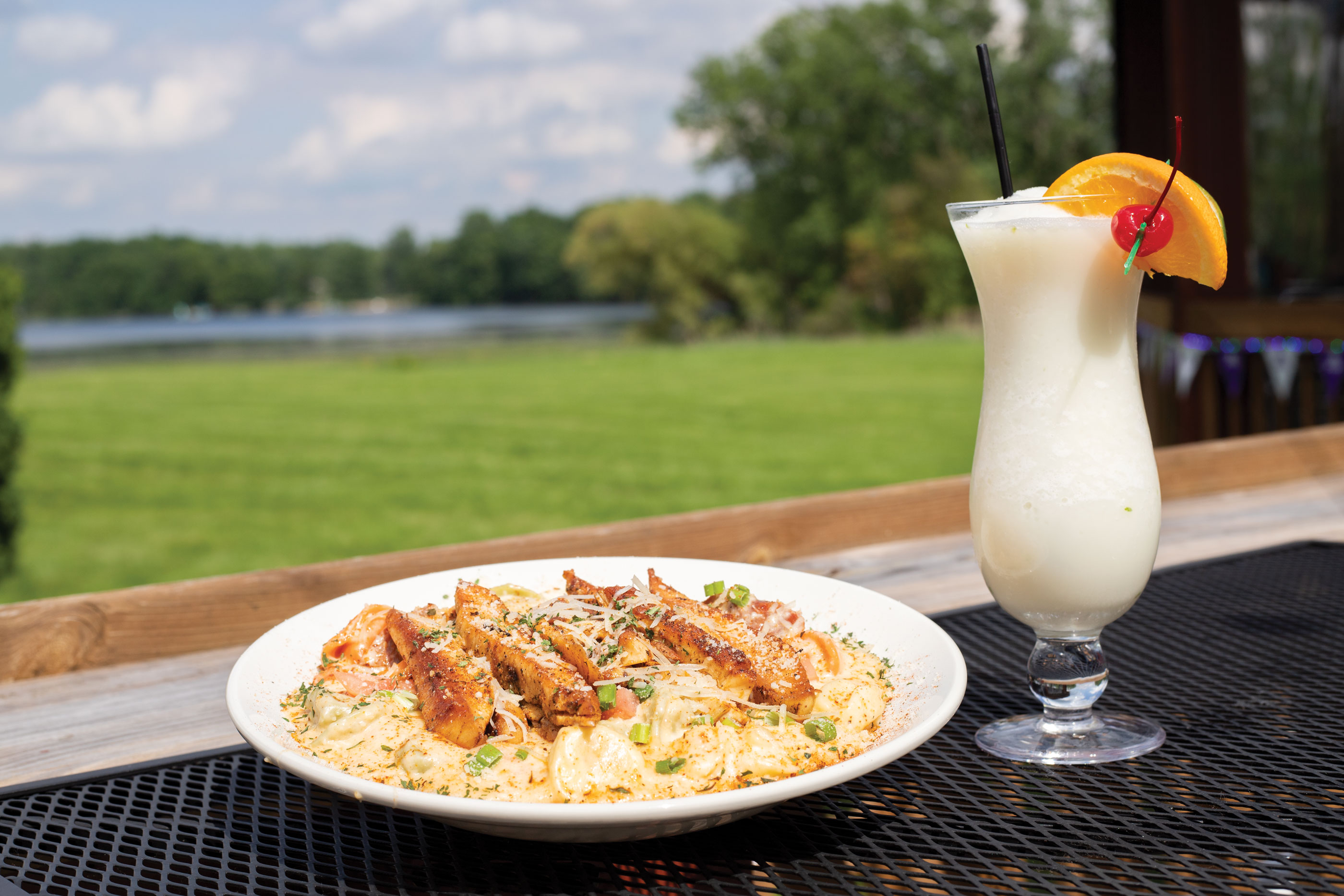 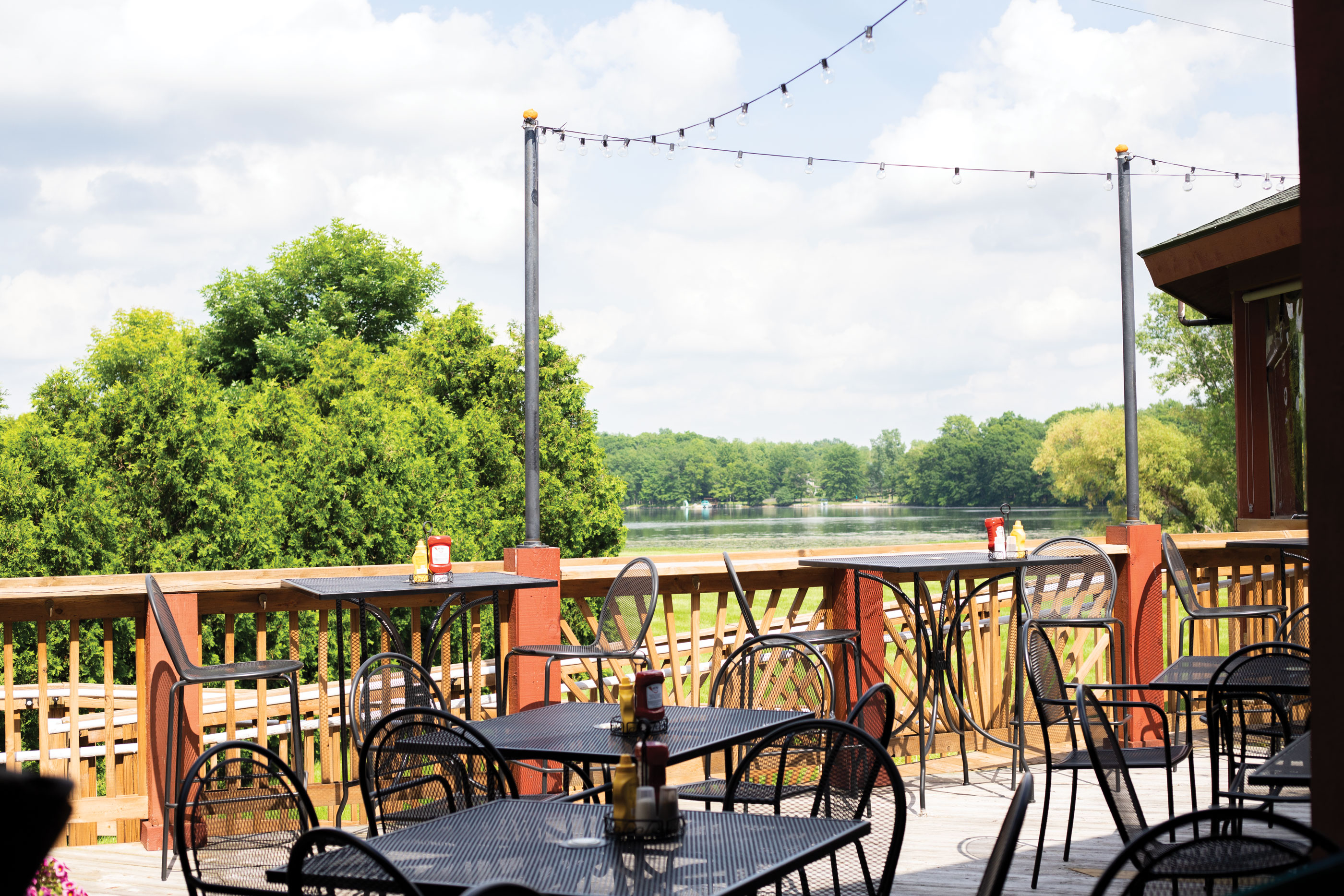 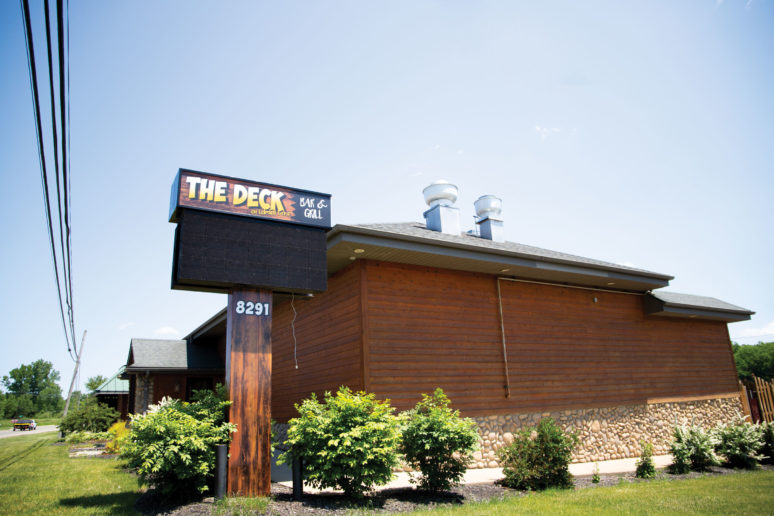 The Deck on Lobdell Lake

This family-friendly eatery is located off the stunning shores of Lobdell Lake, the second largest lake in the Fenton/Linden area. The menu features standard American fare, according to the chef, Drew Greeneisen, with a variety of house-made items including appetizers, soups, salads, sandwiches, burgers, brick-oven pizza, and assorted dinner entrees. And patrons love the hand-tossed specialty pizzas made with fresh dough and house-made sauce. The fresh and juicy char-grilled burgers, served with house-made rippled potato chips, are also a customer favorite. Of the many apps on the menu, the Muchacho Nacho is the best-seller. “Our nachos are just plain good!” says the chef.

Patrons can sip a delicious Pineapple Ginger Mojito on the deck, which has seating for 85-100. The refreshing summer cocktail is made with fresh pineapple, mint, rum and ginger beer. The Deck offers a wide selection of spirits and 20 beers on tap, including eight Michigan craft brews. On some weekends, you can enjoy live music on the deck and for those who don’t like the heat, there is seating inside for 178 guests.

You can get to The Deck on Lobdell Lake by boat and dock in one of 12 slips, Greeneisen reports. The restaurant is especially popular on long holiday weekends, he adds. “The atmosphere is light, easy and relaxing!” 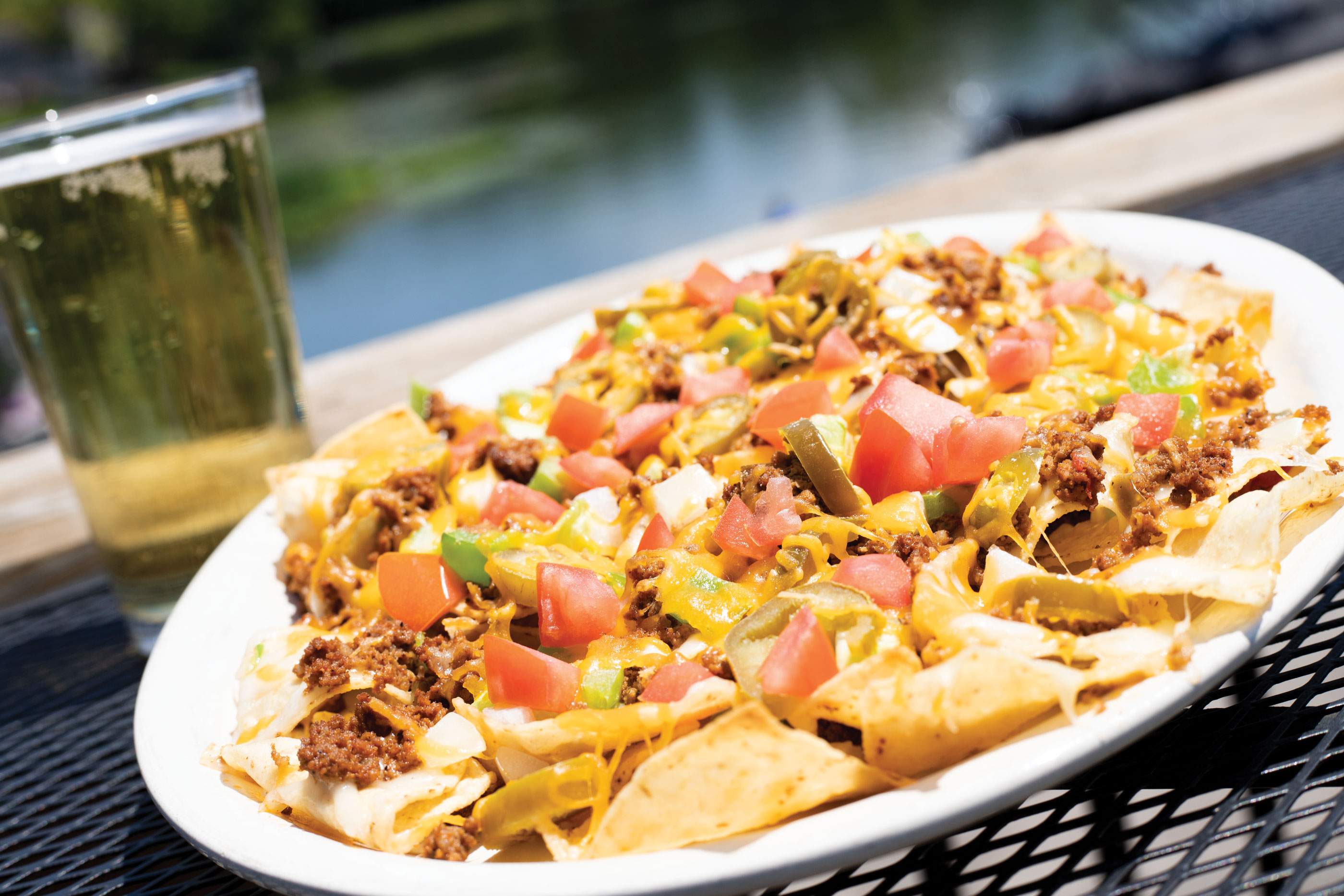 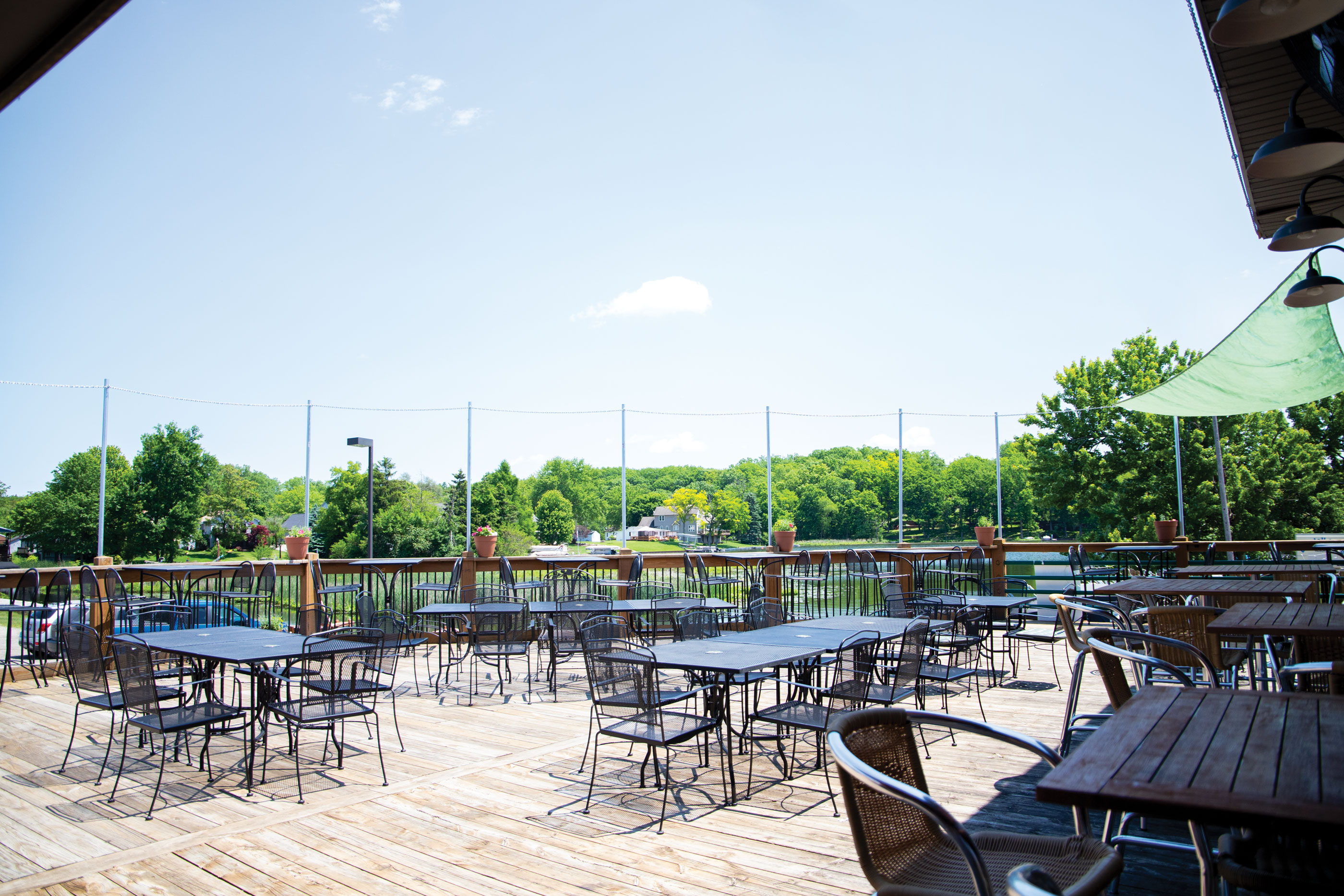 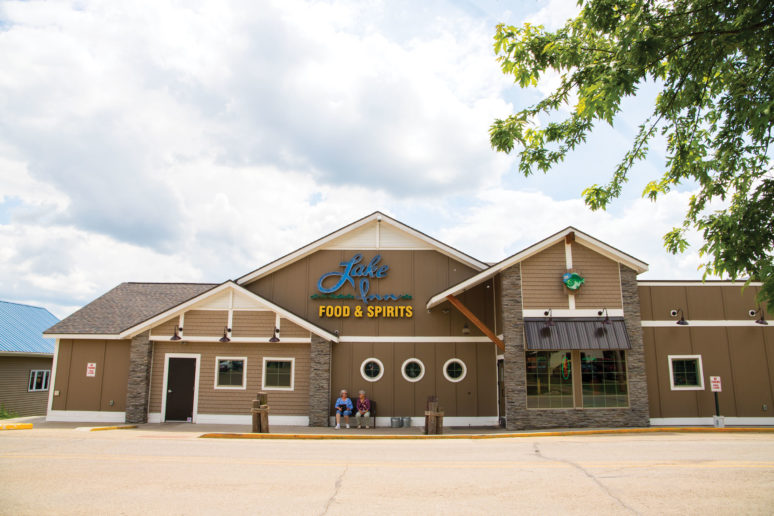 This family-owned-and-operated destination restaurant and bar is located on the shores of beautiful Lake Nepessing. According to Co-owner, Brett Knisely, patrons enjoy the cozy and charming “Up North” atmosphere, really good food and the large deck and tiki bar with a panoramic lake view. “It’s a family business that has been around since the 1930s,” says Knisely. His family took it over in 2011 and did a full-scale remodel of the building and deck in 2016.

During the summer, the big draw at Lake Inn is the deck, with seating for 120 guests. The cocktail menu includes the best-selling Watermelon Habanero Margarita. “It’s an eye-catcher,” says the co-owner. Lake Inn also offers an extensive wine list, as well as 40 beers on tap including brews from some of Michigan’s most popular breweries. “There is something really peaceful about sitting by the water, taking in the sunset and looking at the boats,” Knisely says. “Come and check out the deck. It’s a unique and special place to be.” 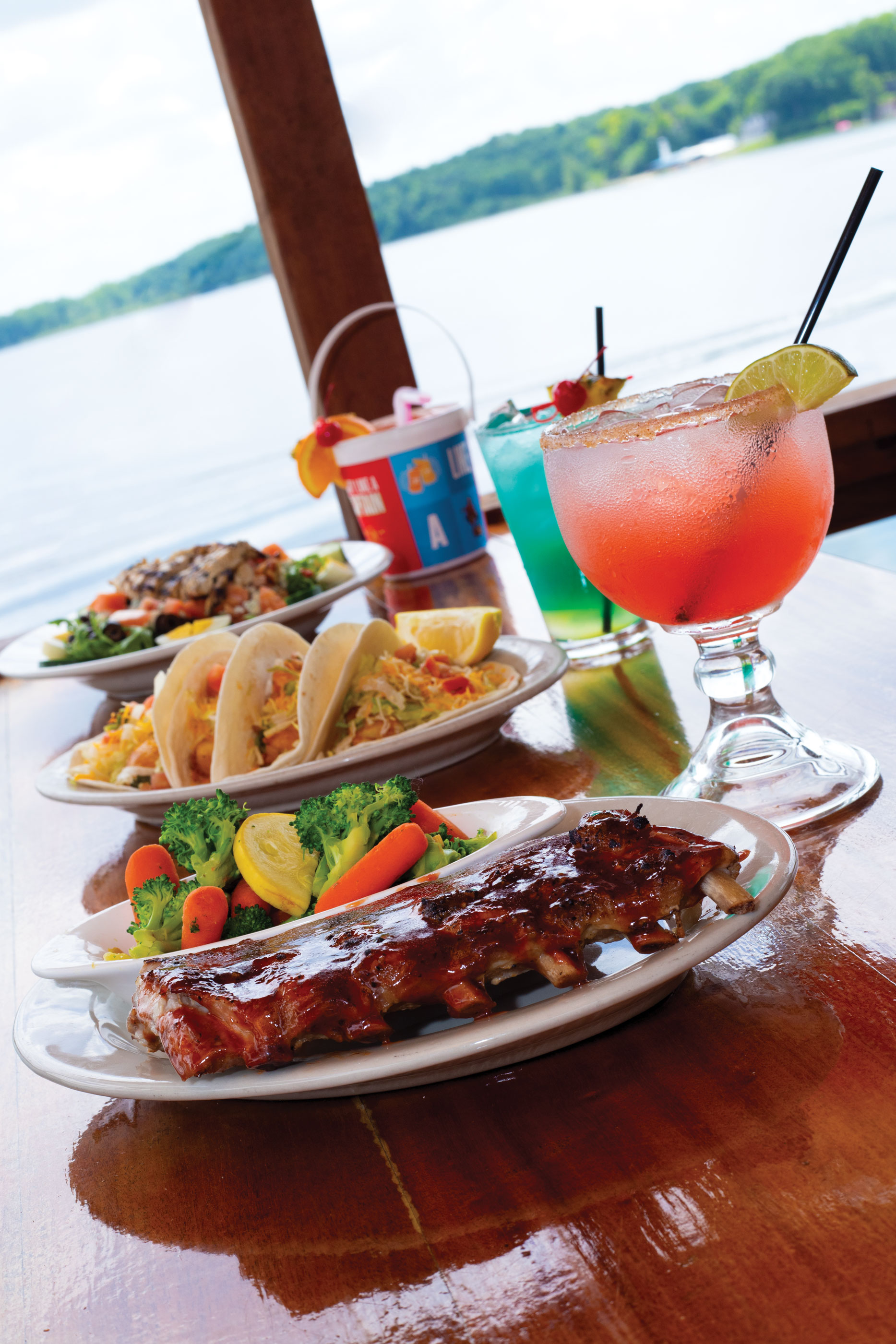 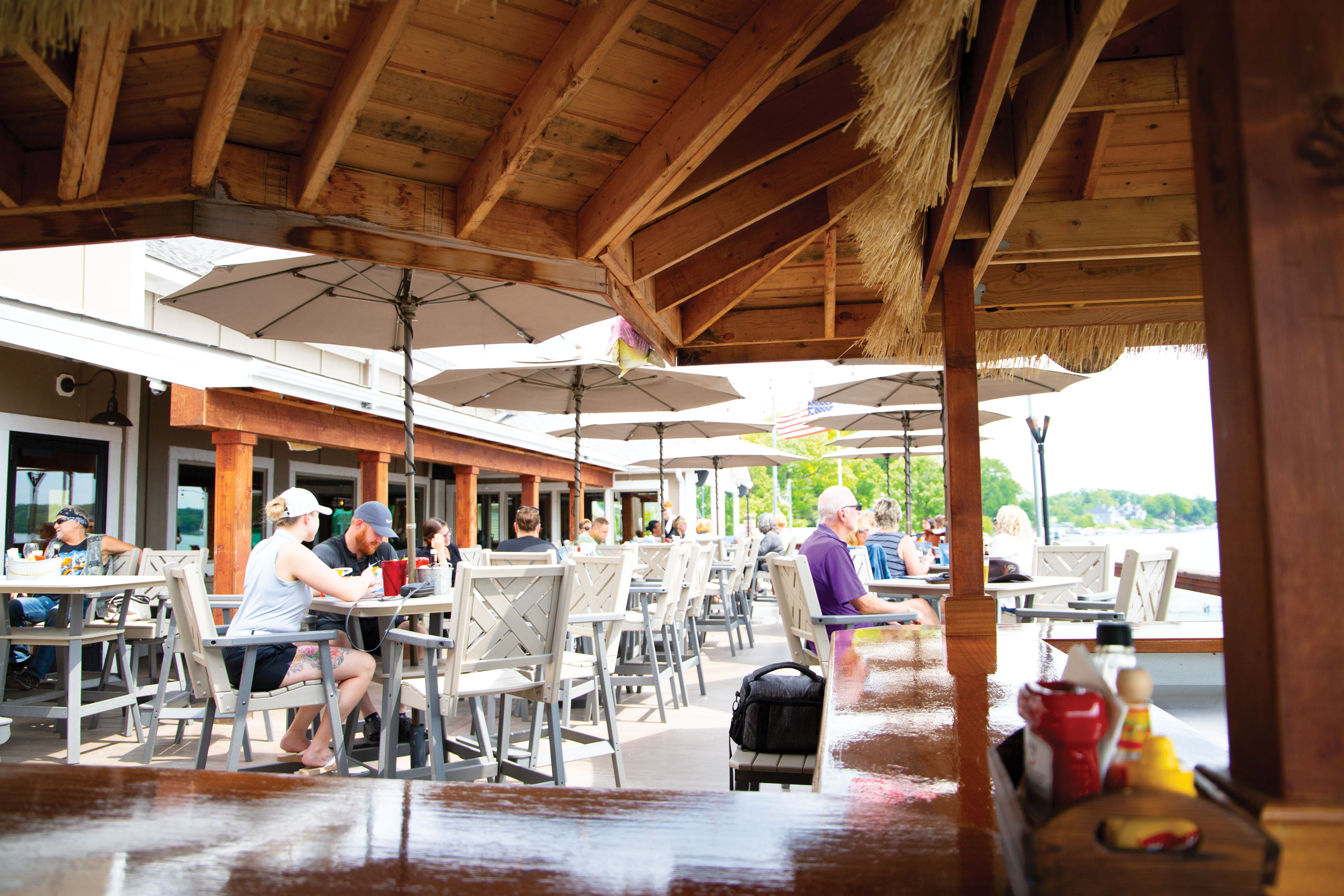 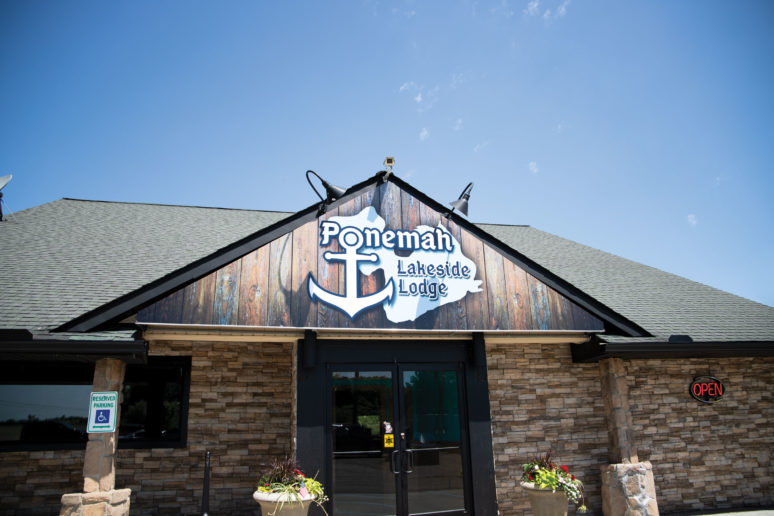 Diners at this recently opened restaurant will enjoy a picturesque view of Lake Ponemah and a magical sunset reflecting on the water. The eatery offers a casual and relaxing atmosphere with indoor and outdoor dining, according to Owner, Jason Warda. Overlooking Lake Ponemah, the large deck has seating for 120, a tiki bar and live music on the weekends.

Warda describes The Lodge menu as “upscale bar food.” He adds, “and when people sit by the water, they want to eat fish. Our lightly-breaded fish and chips have been really popular.” Other seafood choices include Catch of the Day, shrimp, fish tacos and crab cakes, which are made from a special recipe the chef brought with him from Florida. The menu includes a variety of salads and appetizers, Detroit-style pizza (rectangular with a thick, crispy crust), and their famous submarine sandwiches. “They’re just really big!” exclaims Warda, adding that the Ponemah Sub (salami, ham, pepperoni, provolone, lettuce, tomato, sliced cherry peppers, mayo, onion and Italian dressing) is the favorite. You can also enjoy a refreshing cocktail while taking in the lake view – a delightful, frozen Margarita or Piña Colada. There are six beers on tap and a good wine selection.

You can get to Ponemah Lakeside Lodge by car, bike, boat or a free shuttle service offered by Warda who owns two other restaurants in Fenton. “Come on in and check us out!” 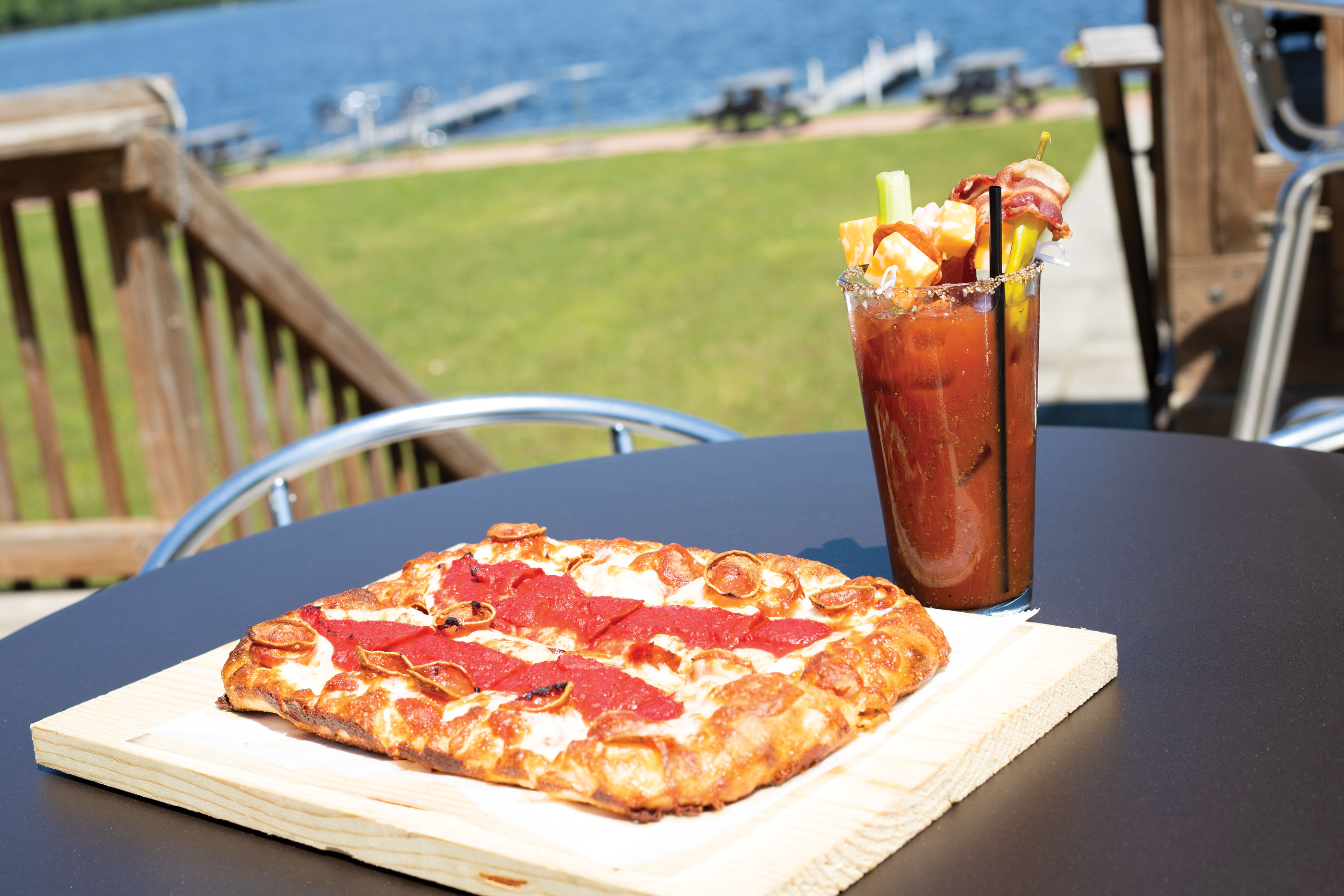 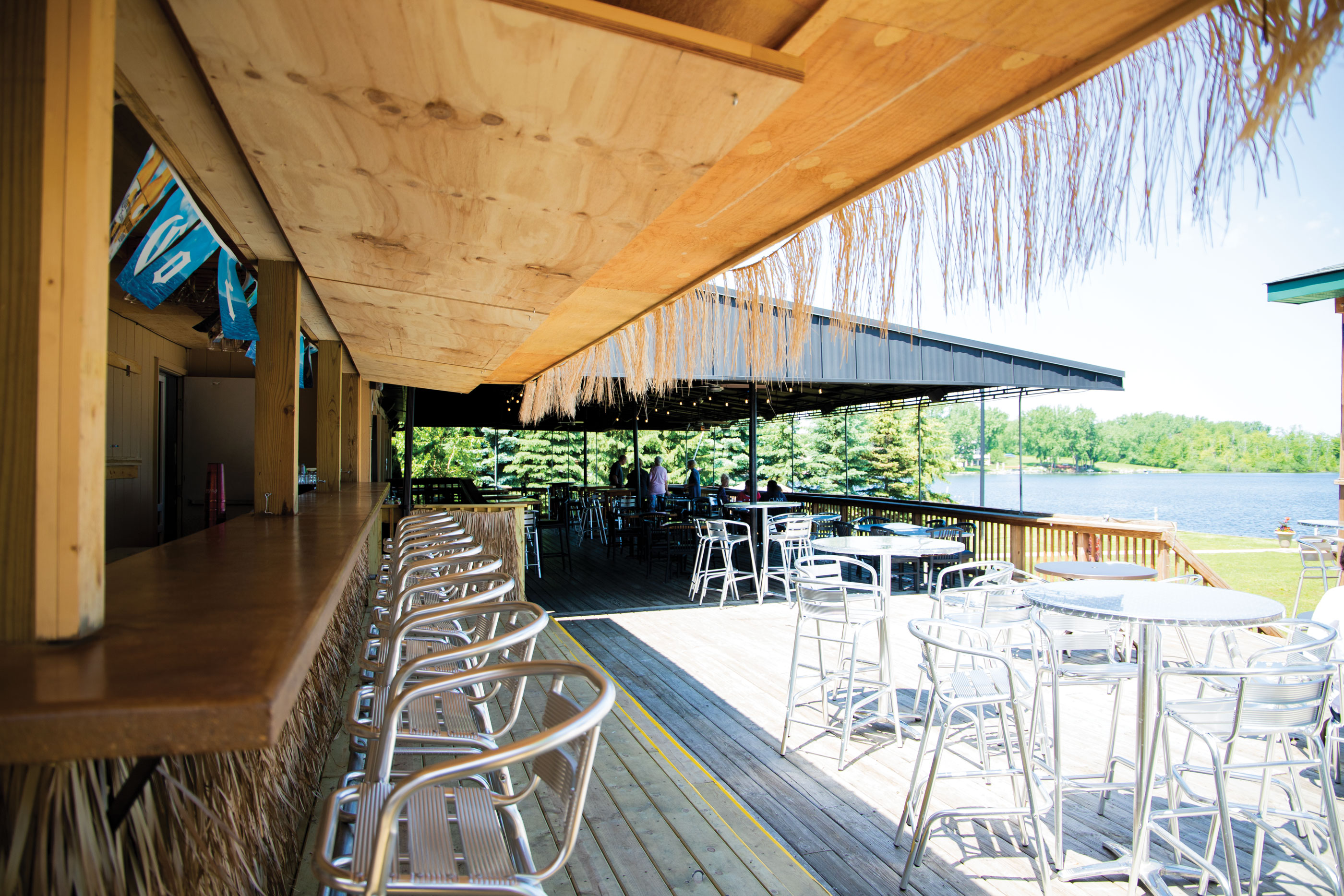 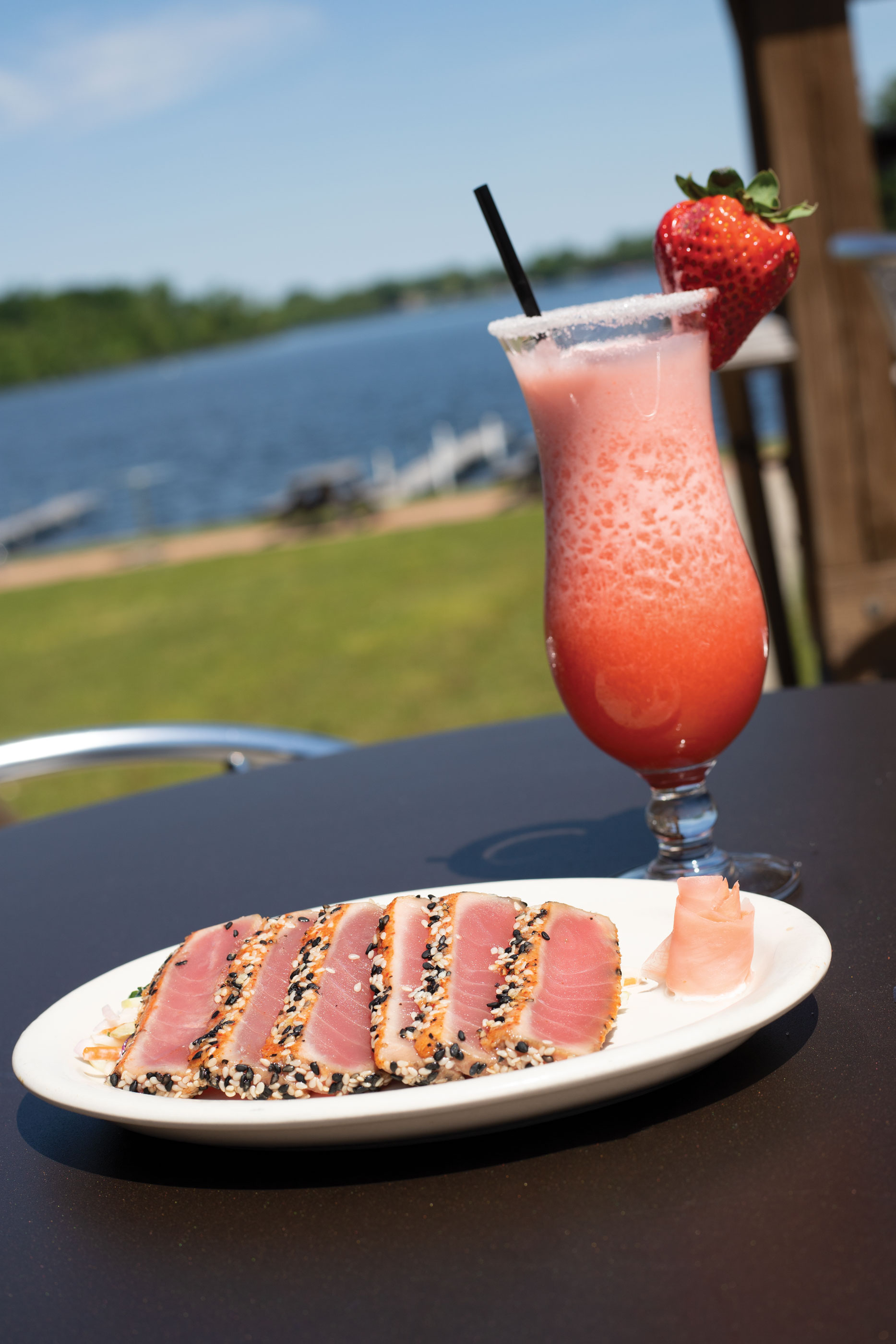 Ahi Tuna and a Signature Cocktail 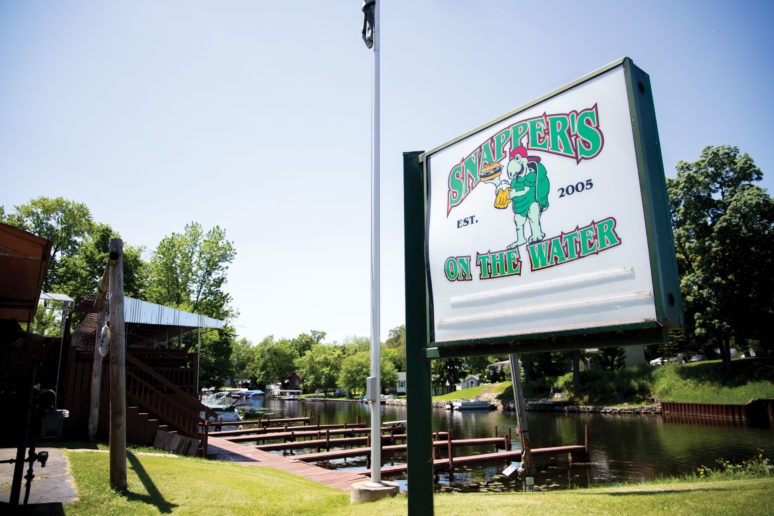 Snapper’s on the Water

For a laid-back and fun outdoor dining experience, visit Snapper’s on the Water. Outdoor dining can be enjoyed on the deck overlooking the channel between Bennett and Lobdell Lakes. The restaurant was purchased by Kirk Norman in 2004 and re-opened in 2005. Norman says you’ll find boats, bikes, beer and some really good barbeque at Snapper’s, which is family-friendly until 9pm when it is an adult-only crowd, with live music, plenty of beverages and karaoke.

According to Norman, Snapper’s is known for the Snapper Slapper – a cocktail made with dry ice and seven different liquors, it packs a powerful punch. “It’s pretty neat!” he exclaims. “No one else around here does it.” Along with the Snapper Slapper, the bar offers a variety of cocktails, 16 craft beers on tap, and wine.

On Sundays, Snapper’s features live music on the deck. Sunday Funday is a good time out here,” says Norman. “It’s a fun place. Come on out and join us!” 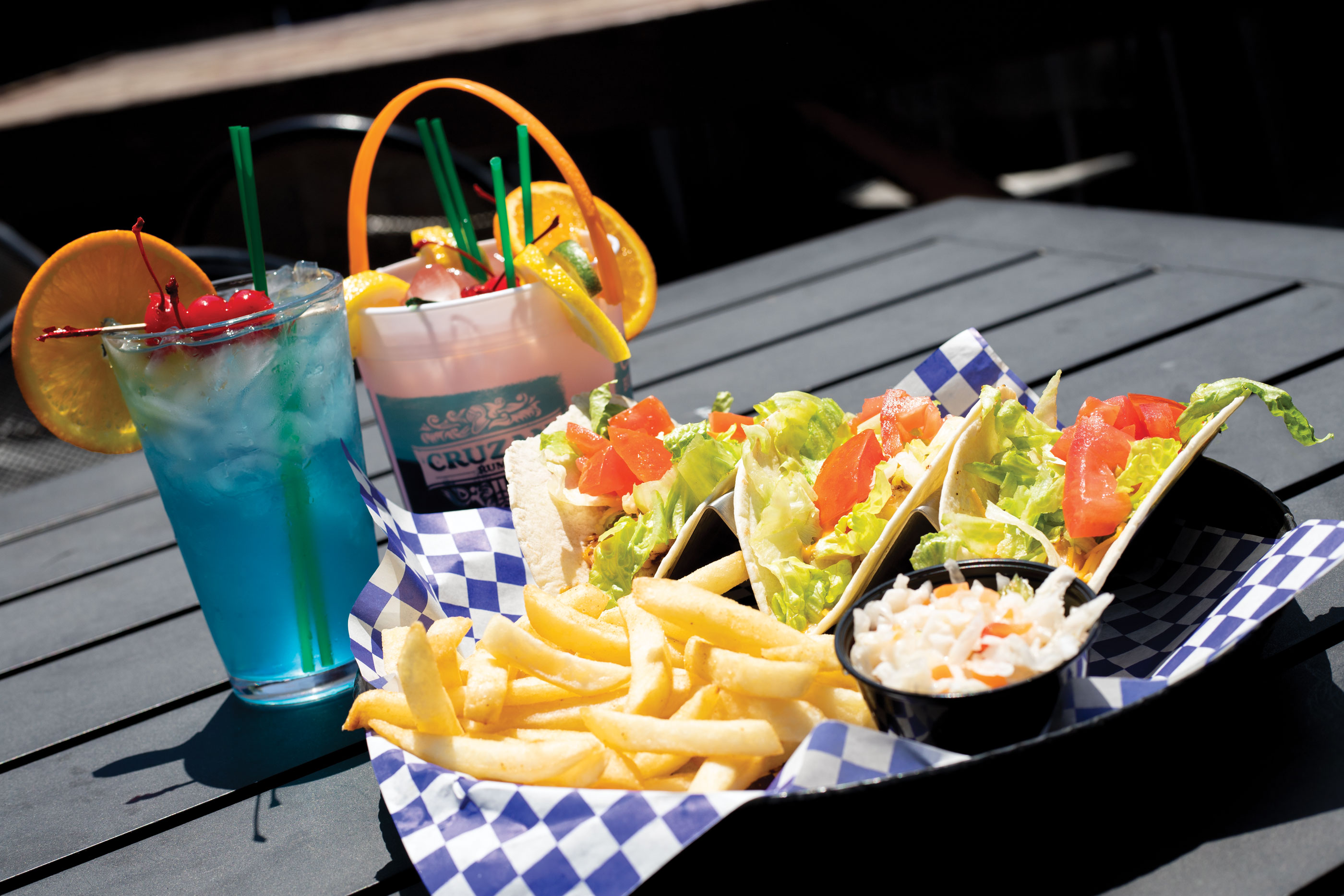 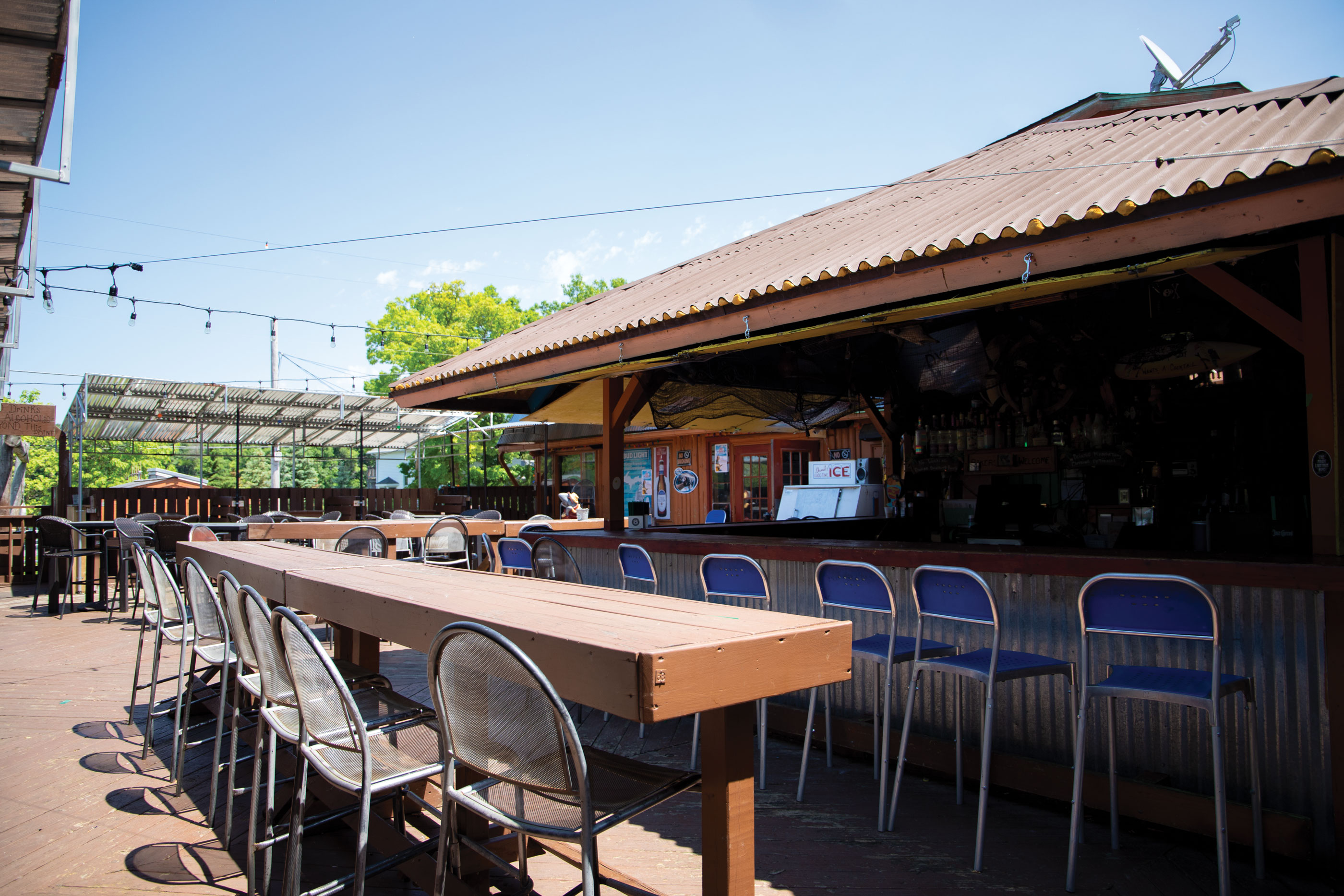