June 8, 1953 started out as a warm spring day in the Flint-Beecher community – but by nightfall, the day would be memorialized by a fatal natural disaster that precipitated numerous acts of humanity as rescue workers rushed to the aid of others in the chaotic days that followed.

The day fell on a Monday, and National Weather Service officials report the daytime temperature reached 82 degrees, falling only a few degrees by sunset. The dew point temperature, indicative of the moisture level in the air, was unusually moist for June at close to 70 degrees. Strong and warm southerly winds were blowing into Genesee County from the Ohio Valley at about 20 mph, connecting with a brisk cold front that was beginning to sweep into the region from Wisconsin. A classic supercell storm was brewing. Weathermen and newscasters had announced a severe weather alert over the radio. TV in those days was in its infancy, and high-tech weather maps and satellite technology were not yet at the fingertips of meteorologists. “There was no tornado warning system in place then,” explains Rich Pollman, NWS Warning Coordinator and Meteorologist in Genesee County. “It was a predecessor to our modern-day watches.”

As daylight faded, the storm suddenly intensified, bringing forth an enormous F5 tornado – one that produces the fastest wind speeds. At about 8:30pm it touched down near Linden Road and roared east along Coldwater Road at 35 miles per hour. With winds whipping past 200mph and a half-mile in width, the twister indiscriminately bulldozed a 27-mile path of grievous destruction before finally dissipating near Lapeer. Heavy rainfall and baseball-size hail pummeled the ground just north of the tornado’s path. 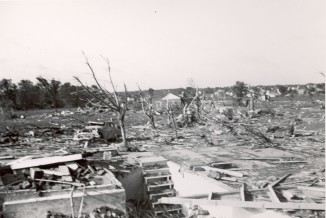 To view more images click the photo to go to the Flint Public Library photo gallery.

By the time the storm lifted, the tornado had claimed the lives of 116 people – nearly all of them Beecher community residents – and more than 800 others were wounded, many whose homes were literally blown to pieces. The winds had flipped vehicles and uprooted trees. The Flint Drive-In Theater and Beecher High School were both damaged – the school gym destroyed. Many of those killed had been at home that evening; some perished after escaping from the Drive-In, and others were caught in a panicked traffic jam at Coldwater and Saginaw streets.

In the aftermath of the storm, people from Flint and neighboring communities flooded the Beecher area with police and fire authorities to search for the dead and wounded and to find family members. They worked tirelessly night and day, combing fields and digging through piles of debris. Aid stations were set up and the wounded crowded area hospitals. The National Guard Armory and IMA Auditorium became temporary morgues. With power and phone lines down, the Genesee County Radio Club facilitated vital communications and was subsequently awarded the Edison Amateur Radio Award for the tenacious efforts of its club members. General Motors, UAW members and numerous local businesses, clubs and organizations contributed to disaster relief funds and donation drives for devastated families.

Construction crews and volunteers worked together to clear debris and rebuild more than 500 homes destroyed or heavily damaged by the tornado. In August of ‘53, Operation Tornado drew thousands of volunteers for a weekend building bee. Flint received recognition by the National Civic League as an “All-American City of 1953” for its outstanding civic accomplishment.

It is this humanitarian community spirit that Charlie Gage, now 85, remembers about the atmosphere following the Beecher Tornado. Charlie lives near Flushing today, but he grew up on a small farm near Beecher north of Coldwater Road, and graduated from Beecher High School. Luckily, his home was not in the tornado’s direct path. Just a few weeks before it struck, Charlie had returned home from the Army after serving in Korea.

On June 8, 1953, Charlie was hanging out with friends outside of Walli’s Drive-In restaurant in Flint, and he still remembers the high winds and seeing flying debris. “They didn’t have tornado warnings back then,” he said. For the next four days, he joined the rescue efforts, starting at Detroit Street to search for the wounded and carry several of the dead out of the rubble to be transferred to the Armory. “Everything was gone,” Charlie says. “Growing up in a place like Beecher, I knew most of the people – and not everyone had a basement. If they were alive, we brought them to a staging area.” He sadly remembers carrying the body of a young teenage girl out of the rubble. Charlie says his Army service hardened him to the horrific scene at home. “Being over in Korea, I learned to not let stuff like that bother me,” he says. “I had seen it over there.”

The Beecher Tornado was one of three massive twisters in 1953, the others occurring in Waco, Texas and in Worcester, Massachusetts. It was recorded as the single deadliest tornado in U.S. history until the one that struck Joplin, Missouri on May 22, 2011. Charlie Gage and other Flint-Beecher area residents were instrumental in the placement of the Beecher Tornado Memorial at the corner of North Saginaw and Coldwater Street to honor the 116 people who died. Although the memorial plaques were stolen in recent years and fundraising plans to replace them have stalled, the Beecher Tornado and the community’s recovery and rebuilding efforts remain an important and well-told piece of Genesee County history.