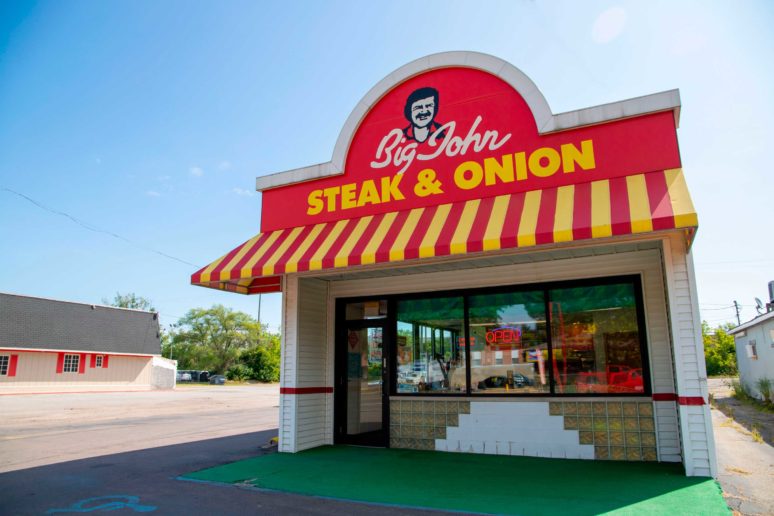 It’s been a delicious Flint tradition since 1972 – Big John Steak & Onion restaurant, with 10 locations in the Flint area and one in Saginaw and Owosso. The shop is best known for its original steak and onion sandwich made with fresh, 100% rib-eye steak, thinly-sliced and grilled to perfection with (or without) onion and piled high on a fresh-baked, Italian sub roll. And there is only one word that can describe it. Perfection!
John Klobucar was the original owner and namesake of the popular sub shop and was also the third person to own a Kentucky Fried Chicken restaurant in the state of Michigan. The original Big John opened on Dort Highway, near Court Street, and is still operating today. After John passed away eight years ago, the Big John Steak & Onion Corporation fell under the direction of his brother, Joe, who is the Chairman/President/CEO. “John started it, but Joe has kept the ball rolling,” says longtime friend, Steve Hoffman.
John and Joe were born and raised on Flint’s Eastside, and attended St. Mary’s School. Joe attended Flint Community College (now MCC), Ferris State University and obtained his master’s degree at Central Michigan University. “Our roots are in Flint,” Joe admits. “Our passion is in Flint.” 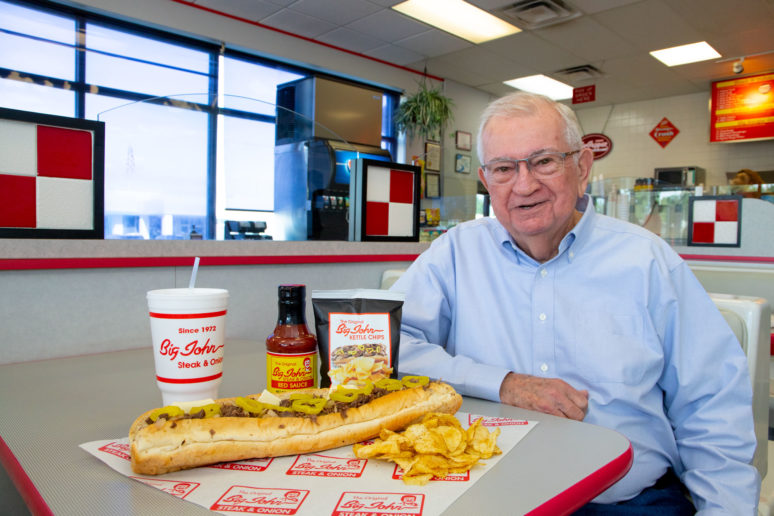 “Our roots are in Flint. Our passion is in Flint.”
Joe Klobucher President/Ceo

Joe lived in Caro, MI for many years, serving as the director of community education for the Caro School District and paving the way for vocational education and the fine arts in the Thumb area. He brought Big John to Caro in 1973 when he purchased a building there and opened Big John Chicken & Sandwich Factory. My City Magazine met up with Joe at the Big John corporate office in Flint to talk about the sub shop’s enduring popularity.
Big John’s cornerstone is the steak and onion sub, according to Joe. “We started out with one sub and it has continued to grow over the years.” Now, the menu offers a variety of subs, including: deli ham and cheese, turkey, and spicy Italian. You will also find the grilled Philly chicken sub, BBQ chicken sub, and a variety of burger subs. Other favorites include three Ultimate Salads, homemade chili and Big John Kettle Chips. 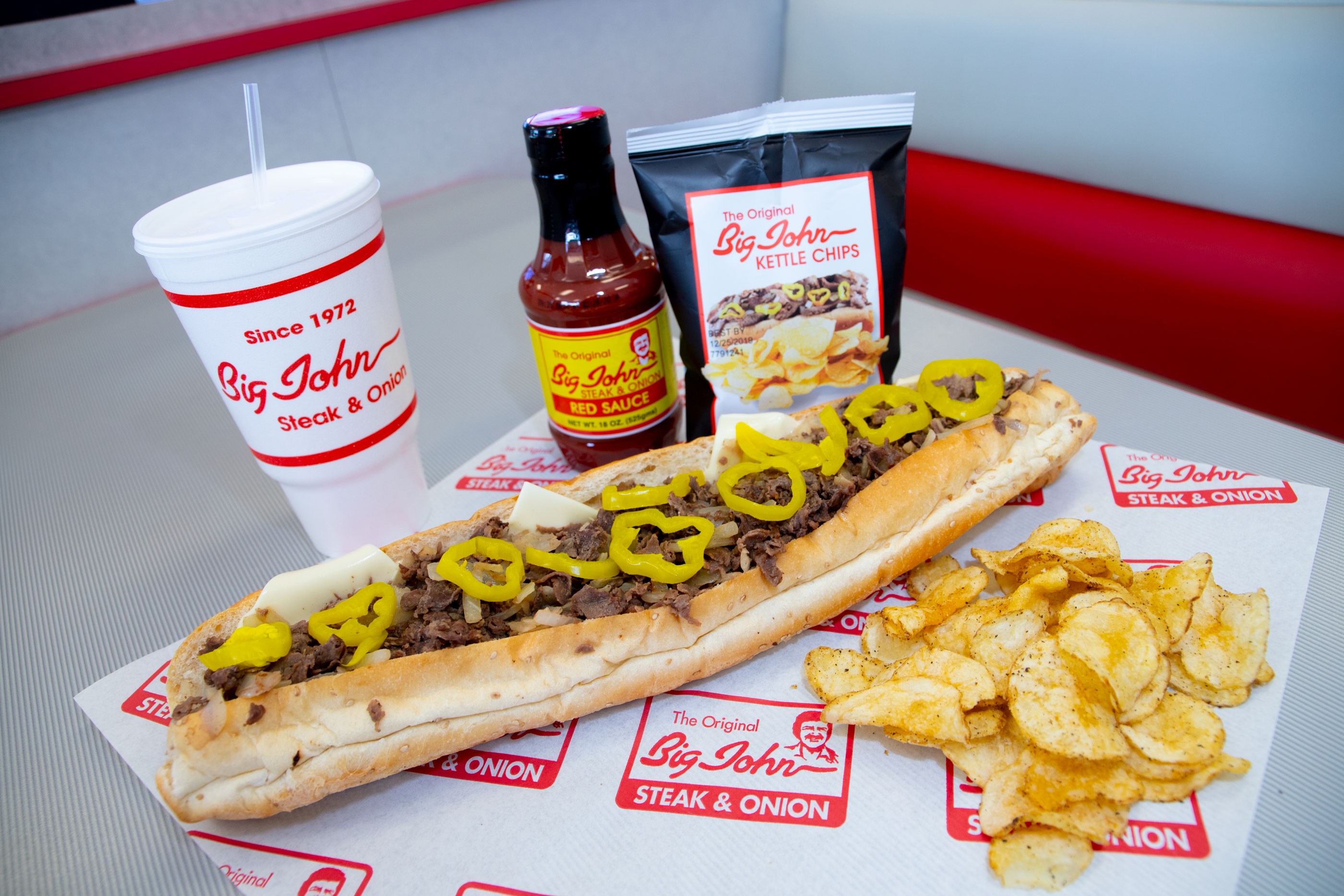 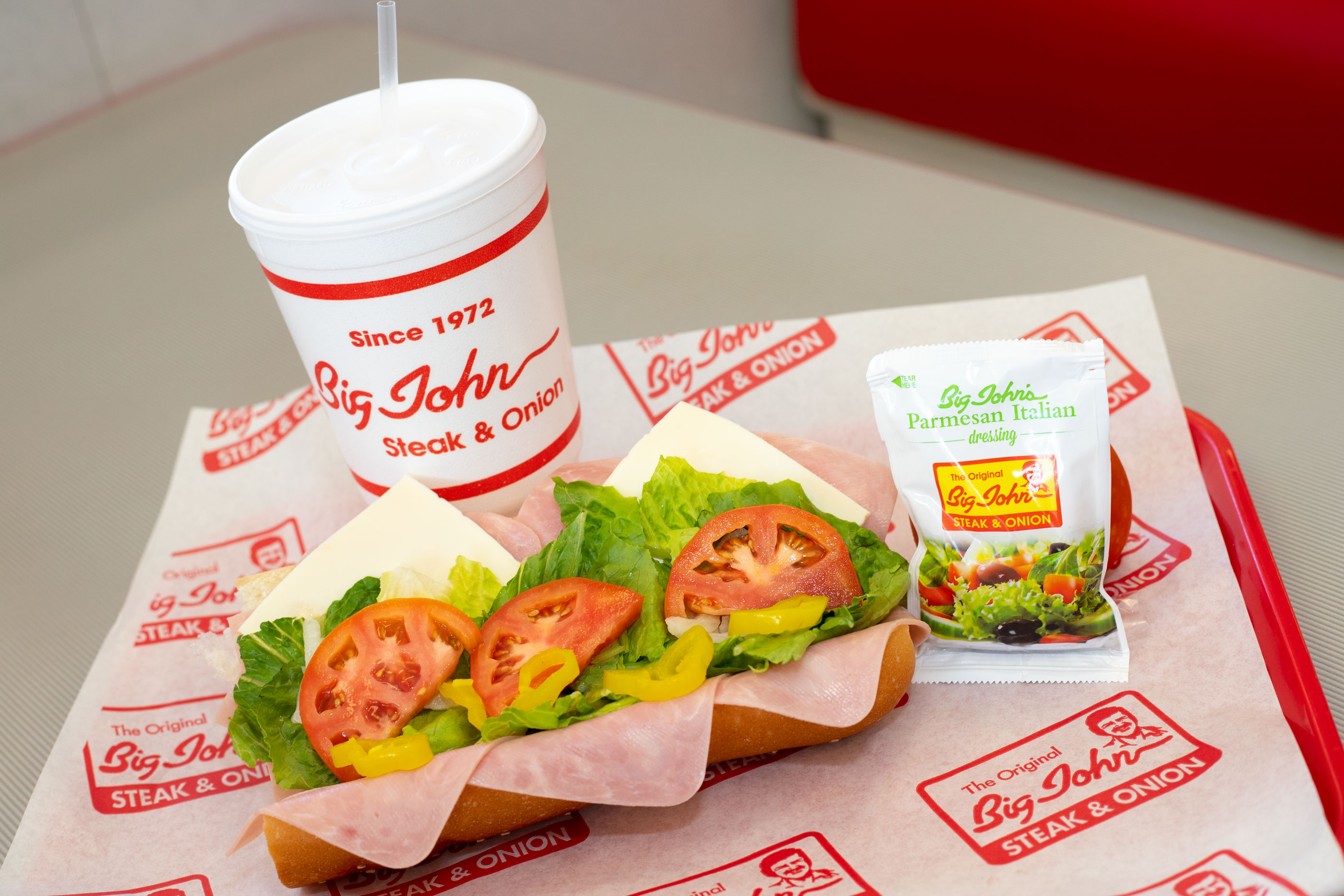 The Deli Ham & Cheese
What makes the subs really special is the bread, which is made by an Italian family in Detroit. “It’s a one-of-a-kind bread!” exclaims Hoffman. “It’s the same recipe; it’s never changed and has stood the test of time.” As a healthier option, the Big John menu also offers a wheat sub roll.
Another thing special about the Big John subs is their famous Red Sauce – a recipe credited to John Kish, owner of a famous former Downtown Flint restaurant, Uncle Bob’s Diner. The sauce has a tangy flavor that is like a cocktail sauce with a sweet/hot taste. “It’s just a delightful sauce,” says Joe. The Red Sauce is bottled and available for purchase. Customers also enjoy the Italian dressing that tops the cold meat subs.
Big John Steak & Onion has a dedicated following of longtime customers who can get a sandwich any way they want it by adding cheese, mushrooms, banana peppers and more. “And, we build the sandwich right in front of you!” Joe exclaims. Party subs, four-, five- and six-feet long, are available (call ahead) and still very popular. 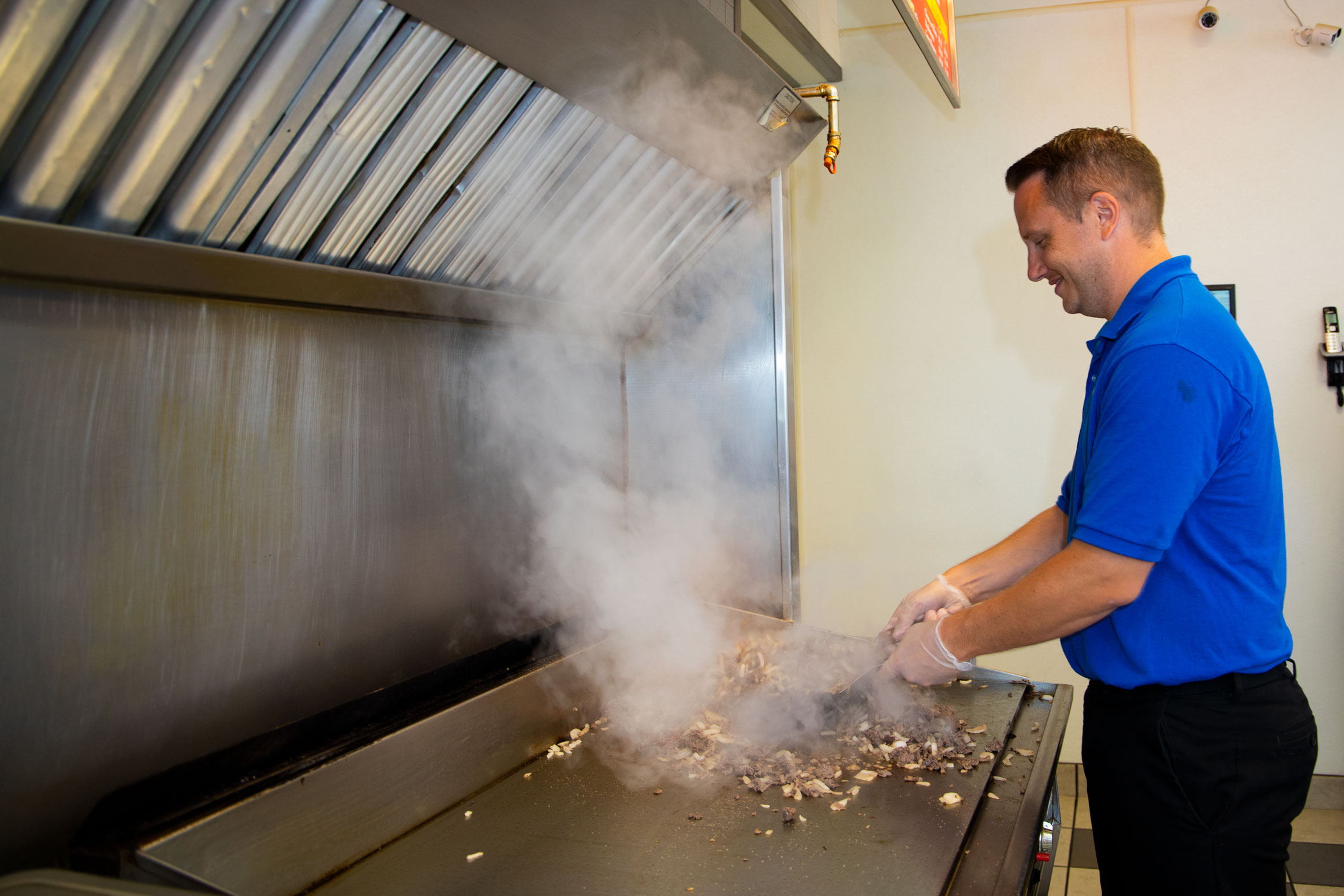 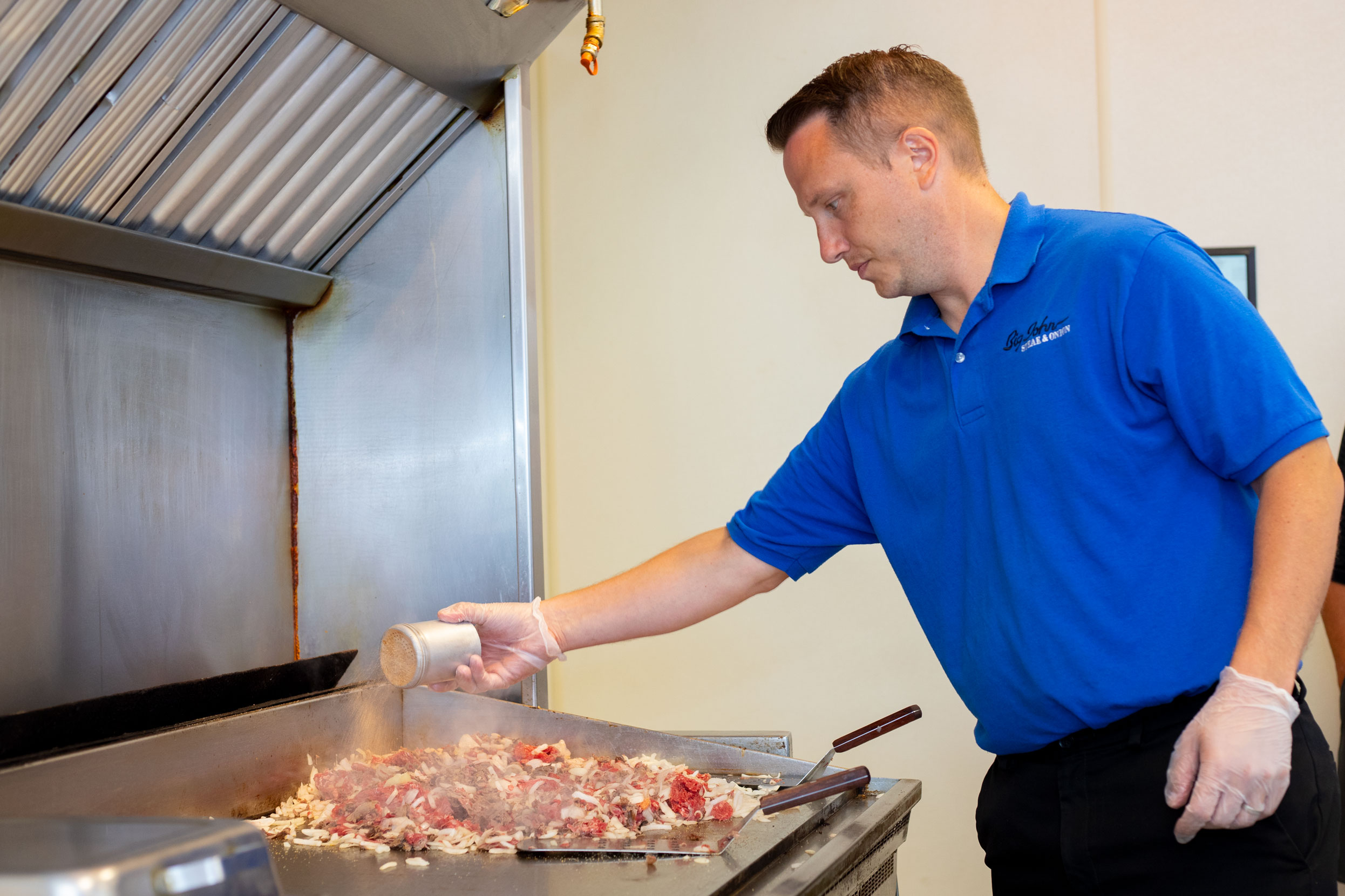 Many longtime Big John employees and partners have contributed to the company’s success, according to Joe. “We’re fortunate to have managers who have been with us a long time.” The restaurant is known to be a stable place of employment that offers employee benefits. “Our employees are valued,” Joe reports. “That’s why they stay.” Christine Ratza, responsible for bookkeeping and payroll, has been with the company for over four decades and has worn many hats over the years.
The Big John corporation is known for giving back to the communities that support it. Because of Joe’s passion for education, Big John Steak & Onion has been a longtime supporter of Mott Community College and recently made a substantial contribution to support scholarships for the new MCC Culinary Arts Institute. 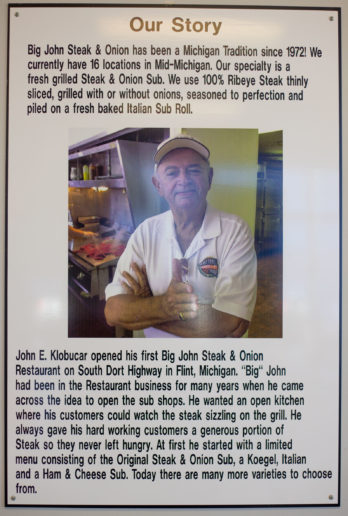 Big John Steak & Onion has stood the test of time since 1972. “It’s an institution, in my opinion,” says Steve Hoffman. “The steak and onion subs are still the most popular sandwich; it’s often imitated but never duplicated – the original and still the best!”