It’s all about the show. When that first note hits, when the riff takes off, Vicariant explodes. “It’s all energy and right from the start we are all into it,” says guitarist Jake Morrison. “We just want to play anywhere and everywhere,” adds guitarist Zak Held. “Really, we believe success is 40% music and 60% show.” The band’s frenetic live performances and raucous rock sound has been turning heads in Greater Flint and around the state since its inception nearly a decade ago. Their reputation is such that they were voted “Favorite Local Band” in the My City Magazine 2022 City’s Choice Awards, despite not being able to play a local live show since the pandemic began. It was an award of anticipation for their next big production. “Yeah, when I first heard that we had won, I was shocked,” says Held. “I mean, we haven’t been able to play live much for nearly two years.” That will change soon in a big way with the band rumbling straight forward, refreshed and hell bent on a dynamic end to the year with new music and upcoming shows.

Vicariant found its start when drummer Mike Roberts uncovered a hidden talent. “I probably shouldn’t tell this story but, why not?” says Held as the band laughs. As the story goes, Roberts and Held were both into playing the video games “Guitar Hero” and “Drum Hero.” Roberts stated that one day while playing “Drum Hero” he believes he figured out how to actually play the drums and told Held that the two should start a band. “I basically just told him ‘okay’ and left it at that,” Held remembers, “but soon after that, I heard him playing drums along with songs by Metallica and other bands. I immediately ran to grab my guitar and that was it.” Roberts and Held recruited bassist Jake Morrison, guitarist Matt Gilson and singer Noah Fox. “It was basically Noah who named the band,” states Held. “The premise of the whole thing is that we want our fans to live vicariously through us – we want to be the vicariant, so to speak. When we started, our slogan was “Tonight, We Live” and is one of the reasons we put everything possible into our shows.” After being together for nearly eight years, singer Fox and guitarist Gilson left the band to pursue new dreams and opportunities. To fill their spots, Vicariant has added singer Brandon Curry and bassist Dave Asbridge (Morrison moved over to guitar) and the band never missed a beat. If anything, they are hungrier and more driven to be the greatest show in metal.

Vicariant is known for the kind of “in-your-face” music that is not for the faint of heart. They play the hardest of heavy metal but, the band would like to point out, that’s not their only style. “We are the ‘mutt’ of music,” says Curry to the agreement of the rest of the band. “There’s variety to what we do.” “We have learned to adapt depending on what the crowd wants,” adds Held. “It’s all part of putting on the best show.” The variety and freedom to play the type of music he wants to sing to is one of the primary reasons why Curry absolutely loves being in the band. “I’m not pigeonholed into one type of song,” he states. “I don’t have to scream everything,” laughter fills the room as he continues. “We can do covers, ballads, whatever. All of us bring ideas to the table and have the respect for one another to offer constructive criticism or disagree.” Held adds, “In the majority of bands, there is just one guy who does all the songwriting. We all have equal say.” The feeling is seconded by veteran bassist Asbridge. “I have played in a ton of bands and I feel most comfortable here. We all get to be creative.” That collaboration has produced a trilogy of new songs that will debut this fall. “I love the new songs,” says Held. “I can’t wait to officially release them to the world.” 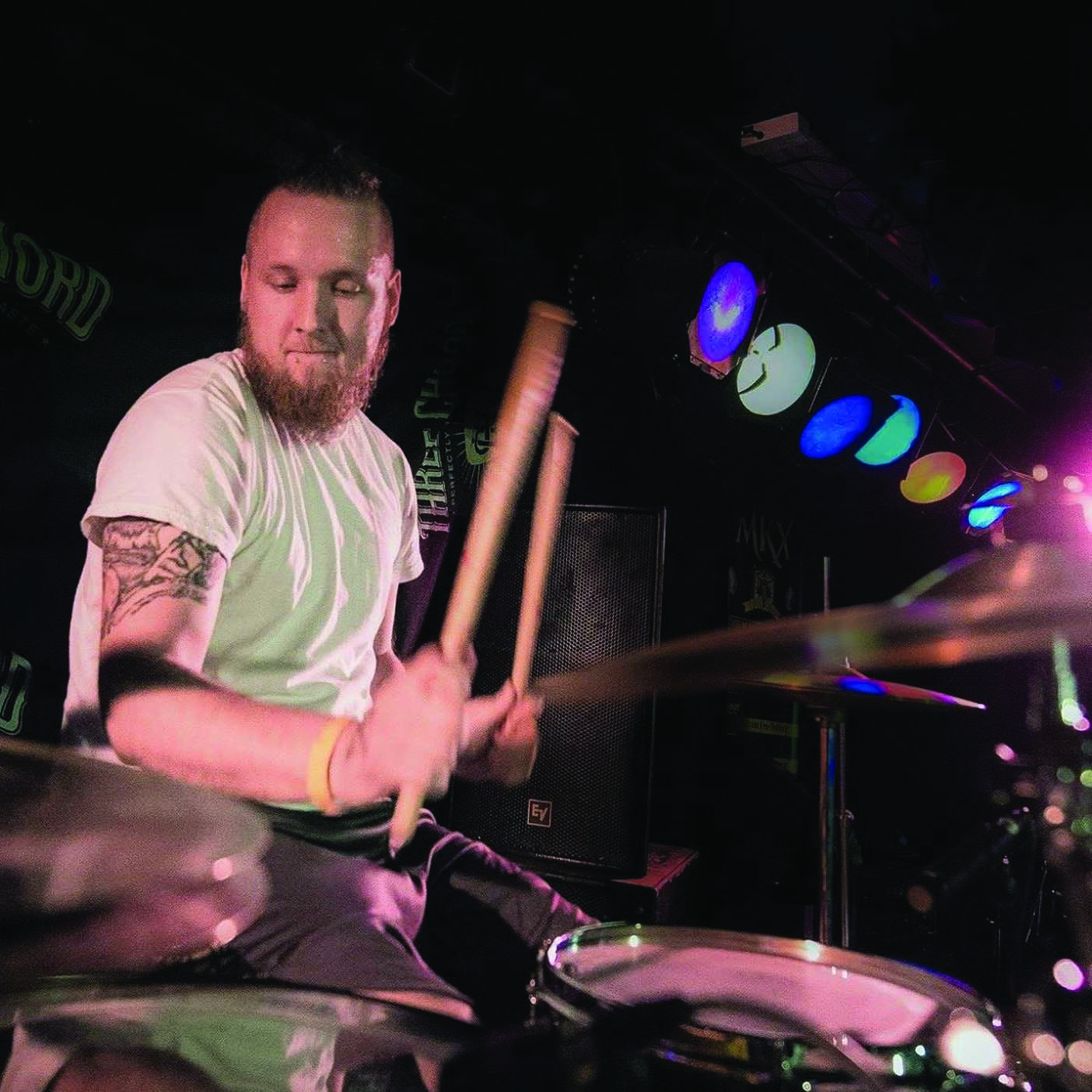 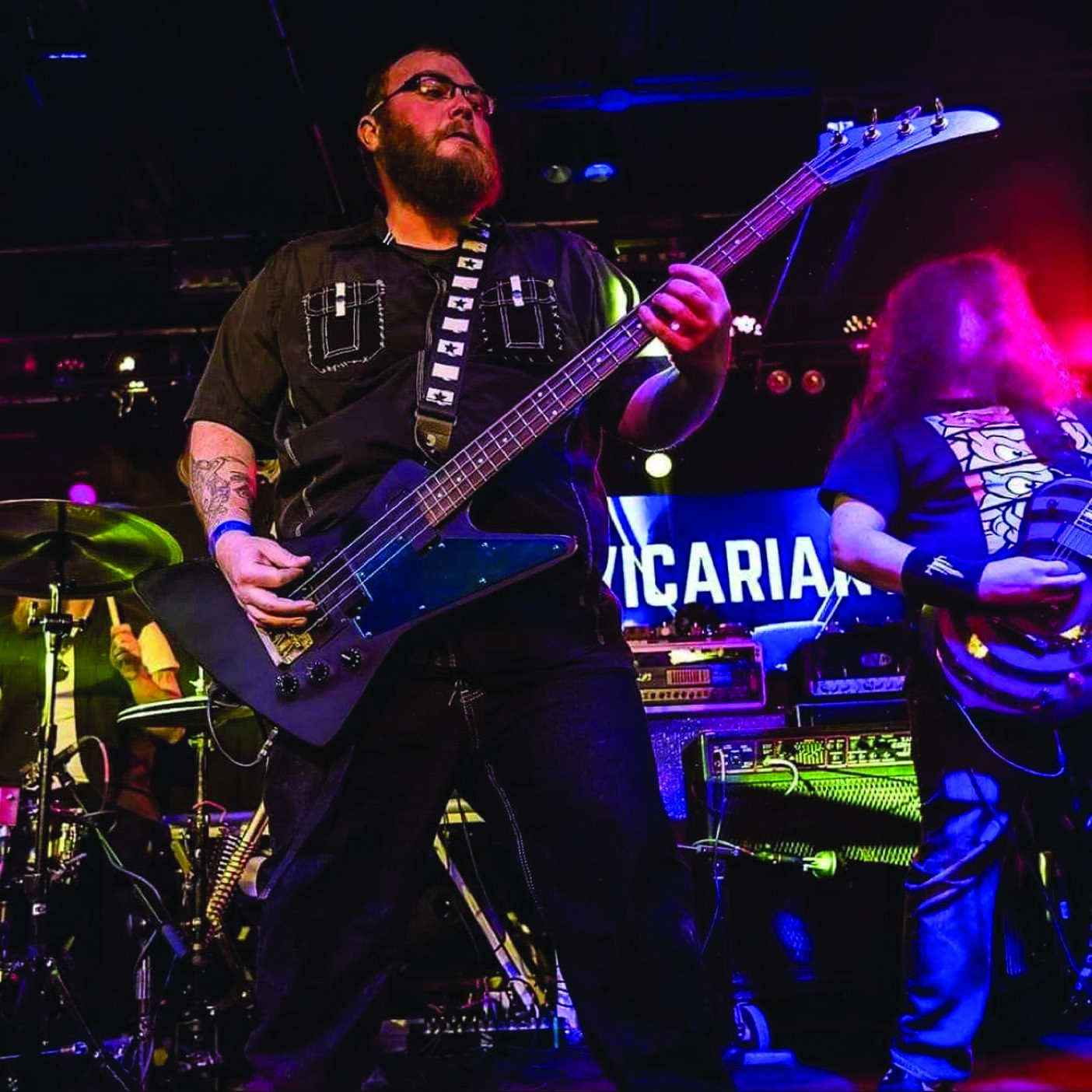 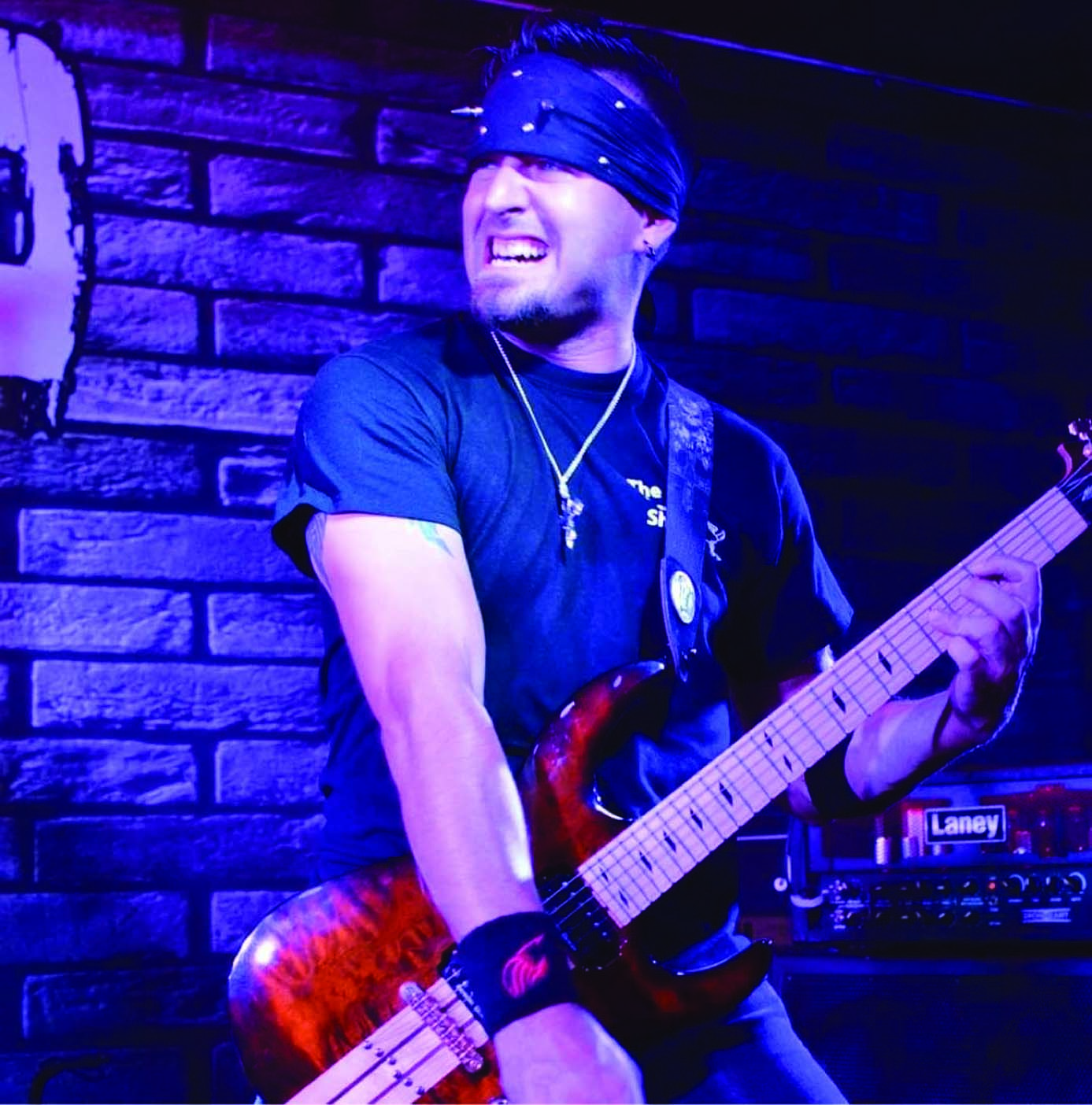 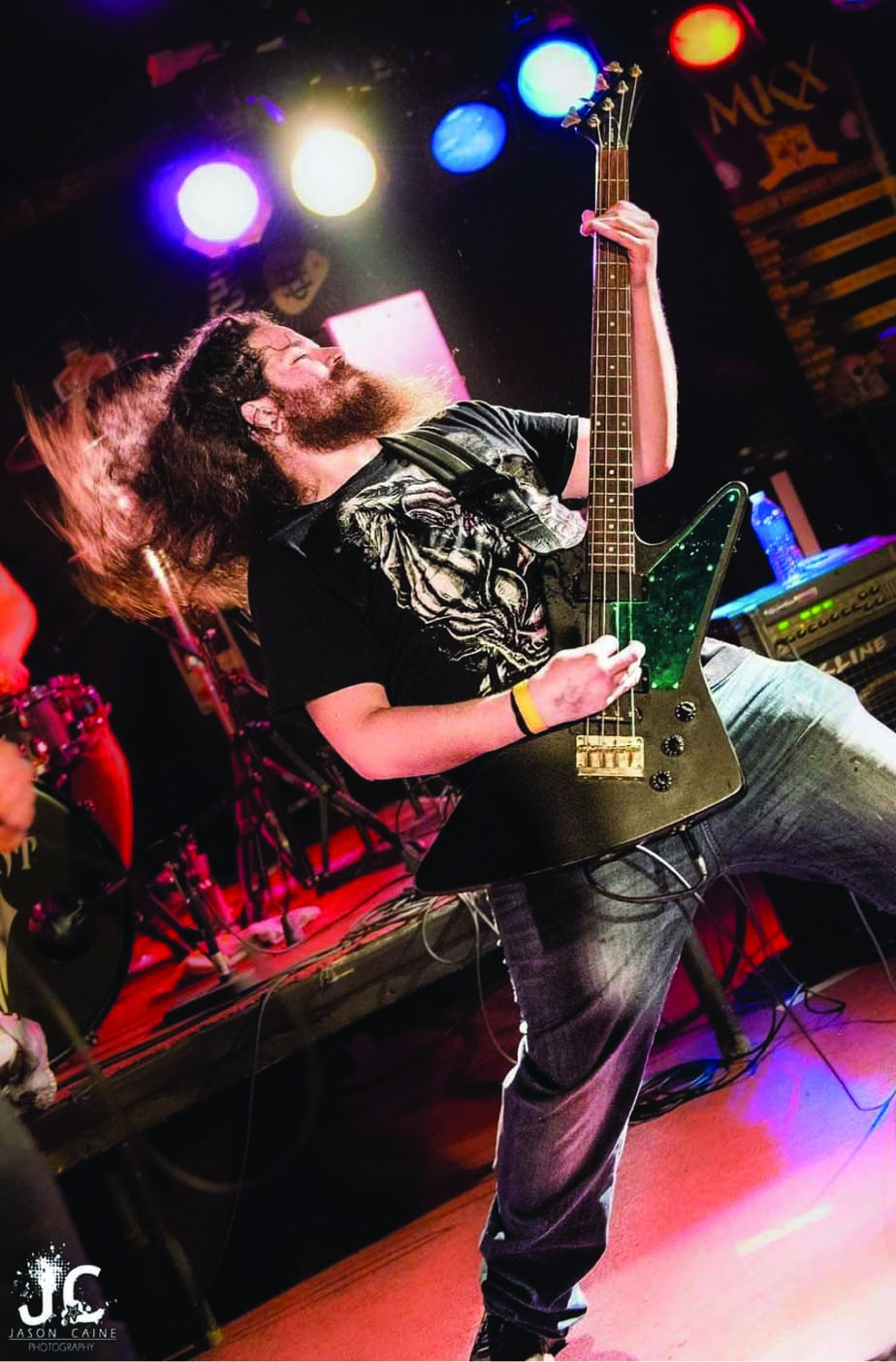 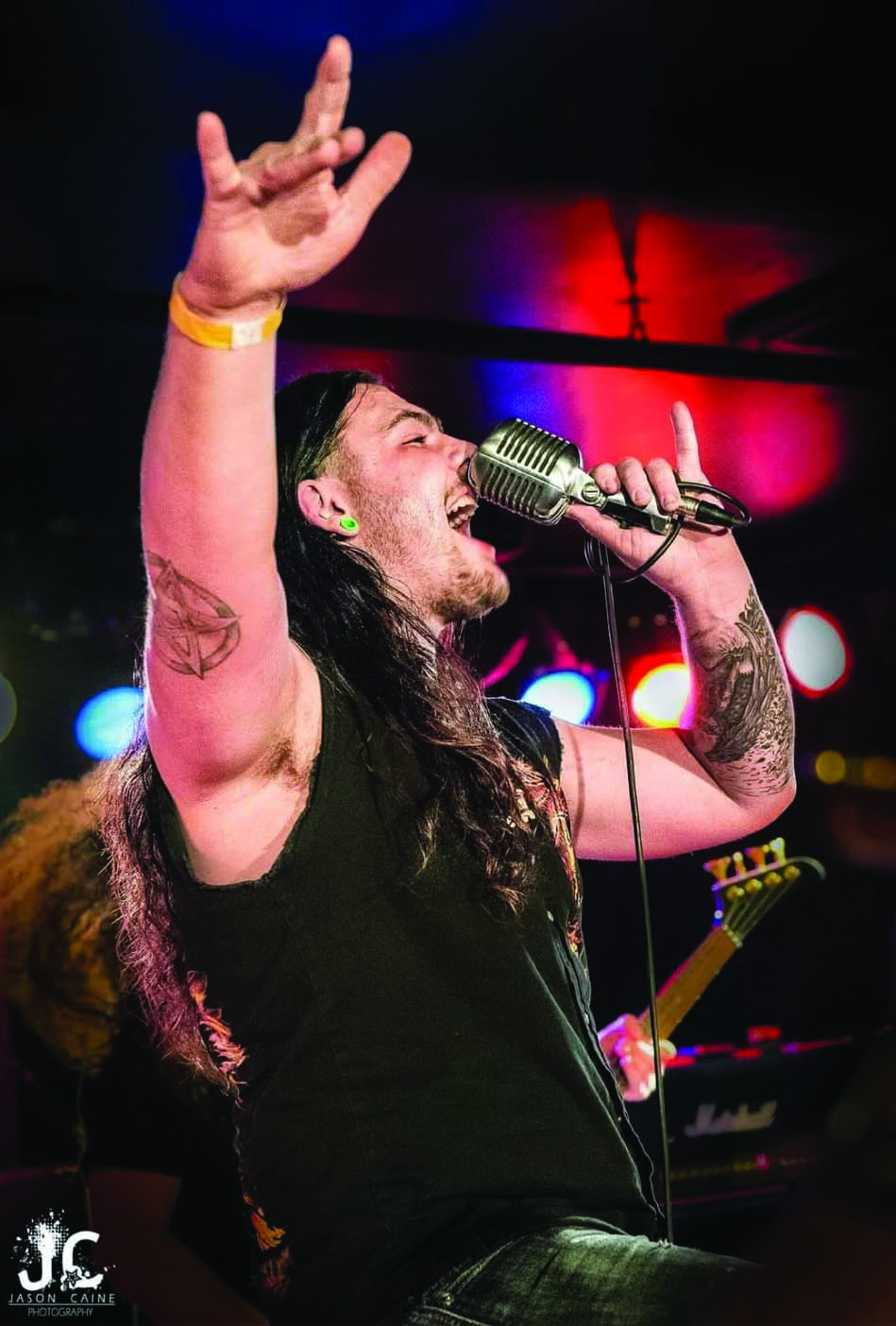 Vicariant is known for the kind of in-your-face music that is not for the faint of heart..

The premise of the whole thing is that we want our fans to live vicariously through us. We want to be the vicariant.

Anyone who has witnessed the phenomenon first hand will know that Vicariant’s live performance is what sets them apart from the rest; but besides that, the band believes that something else makes them unique in the music world. “It’s our professionalism,” says Morrison. “We are always the first to arrive, ready to go. We aren’t late. We get there, play the greatest show on this green earth and then support the other bands with us and,” he continues, “we don’t tolerate any big heads. If one of us starts to take themselves a little too seriously, you best believe we will be knocking them down a peg.” The band nods in agreement. “Yeah, that’s something we don’t tolerate at all,” says Held.

One thing is obvious: the band is itching to play. “Honestly, that’s all we want to do,” says Held. “I mean, it would be nice to be able to pay our bills and do this for a living but I think we are all happy being able to live on stage as much as possible. It is hard, though, to be a rock god for a weekend and then show up to work and operate anonymously on Monday. It’s a jarring transition.” “I would like to be able to travel and spread the word, for sure,” says Morrison. “I would love to go to Japan where they absolutely go crazy for metal.” “A simple goal of mine is to play in every state in the country,” says Held with a smile.

“Another thing I would like to see is more support from fans and bands,” says Morrison. “Bands in Flint used to support each other, no matter what. Sure, there was competition but that just made us all better.” Held adds, “The Greater Flint rock scene has changed. There was a time when Flint was becoming known as the Motown of rock or metal. That’s changed. We need people to get back into it.” “And, we need to support them when they do,” says Morrison. “Let it be known that Vicariant supports local music!” The band laughs in agreement. 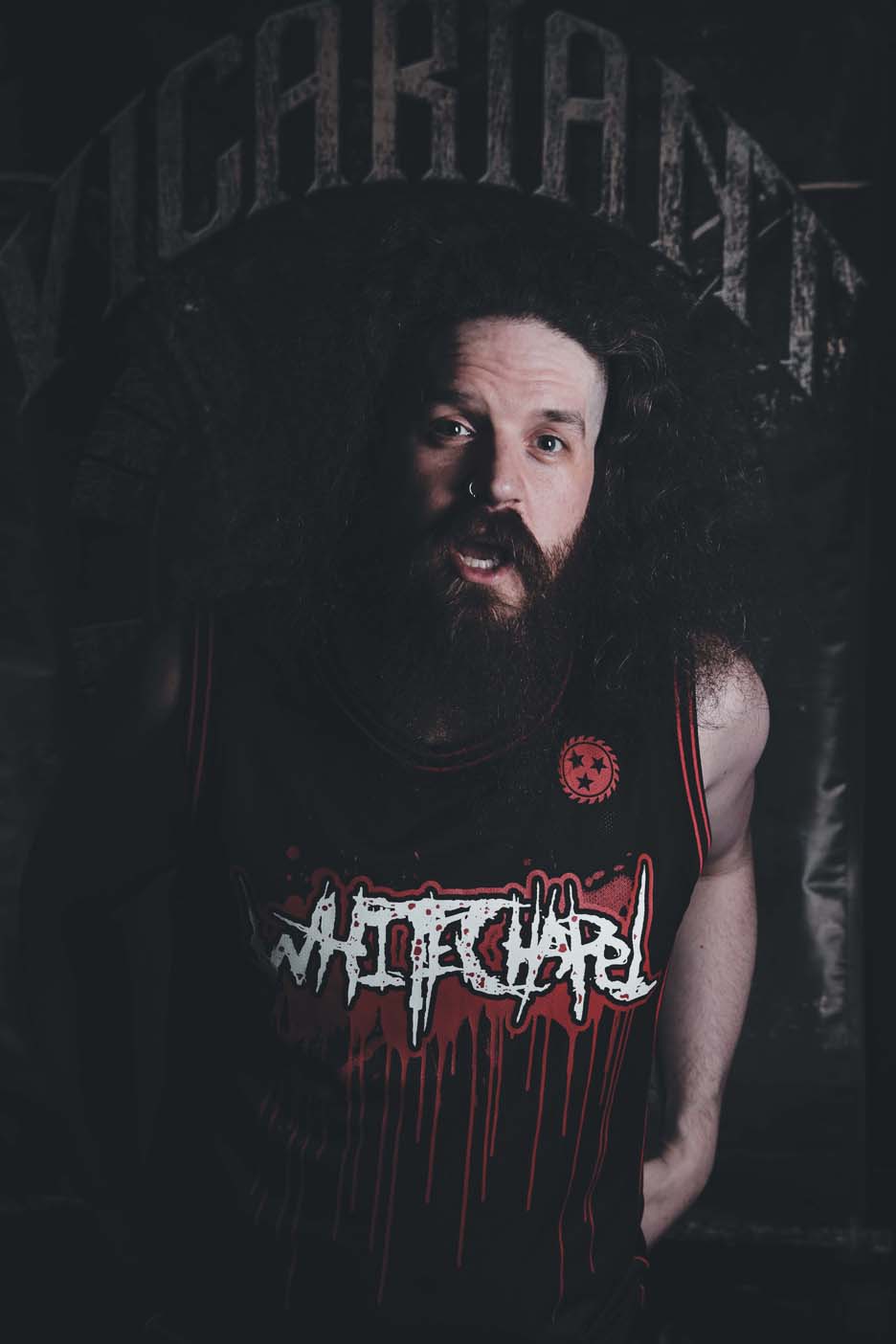 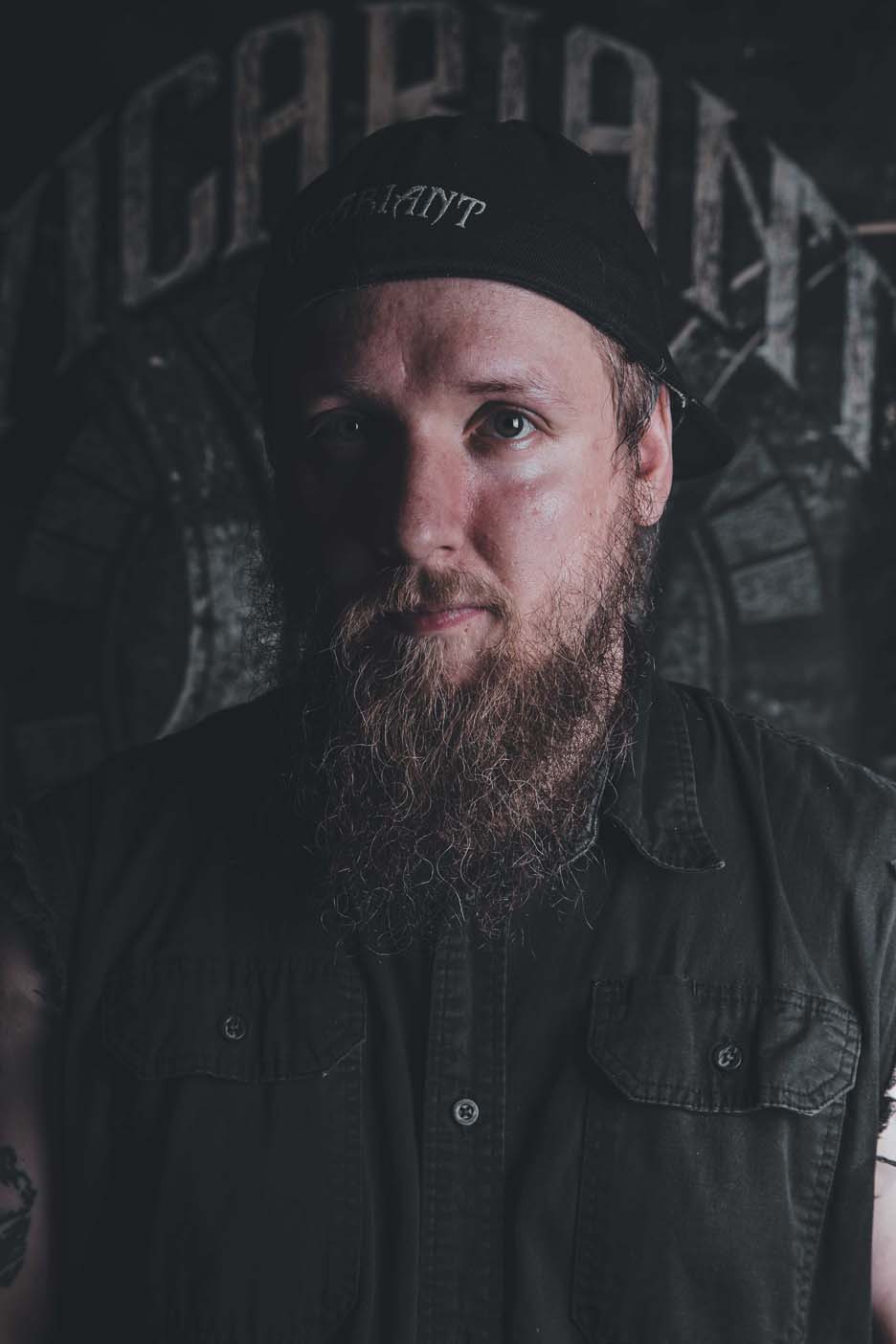 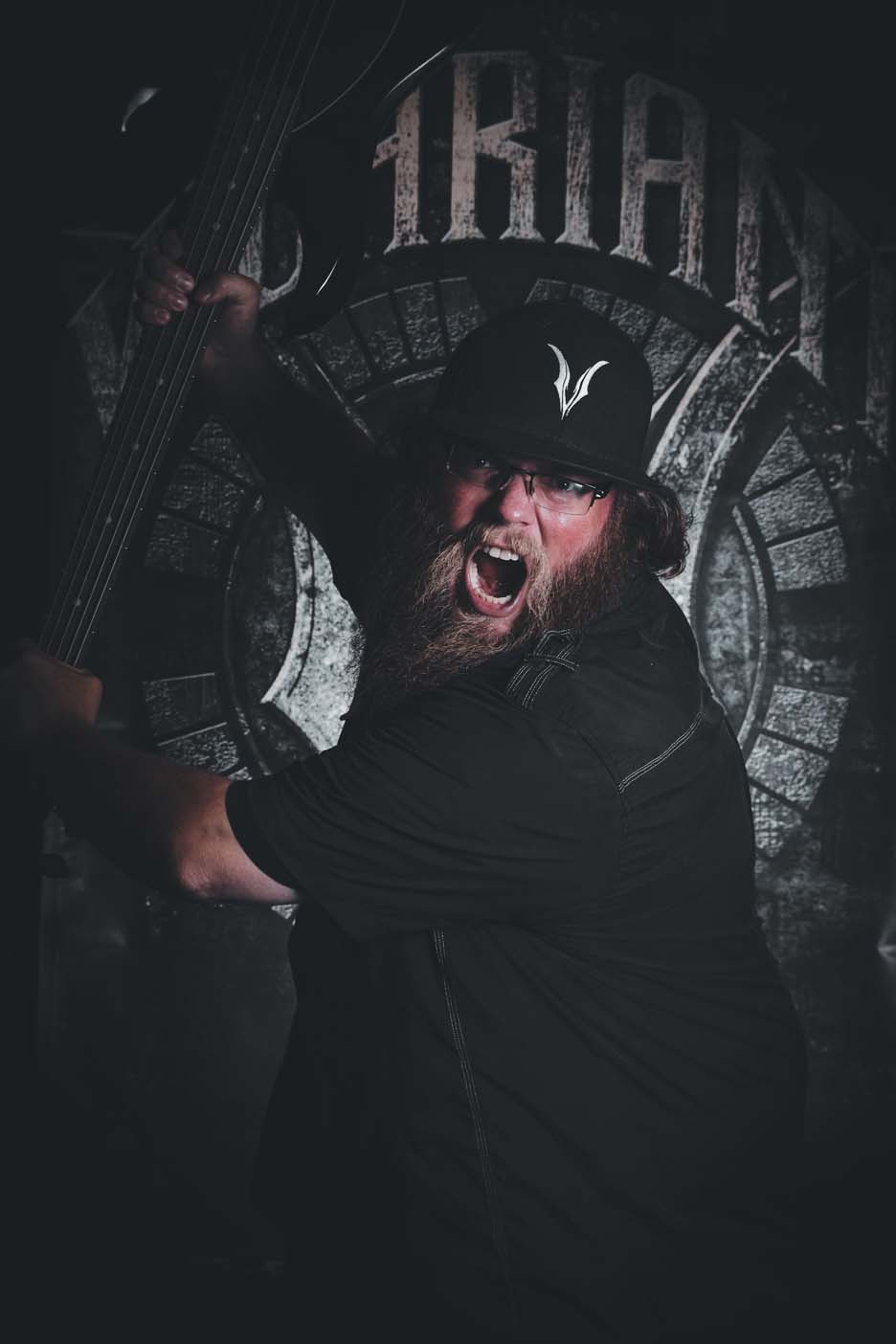 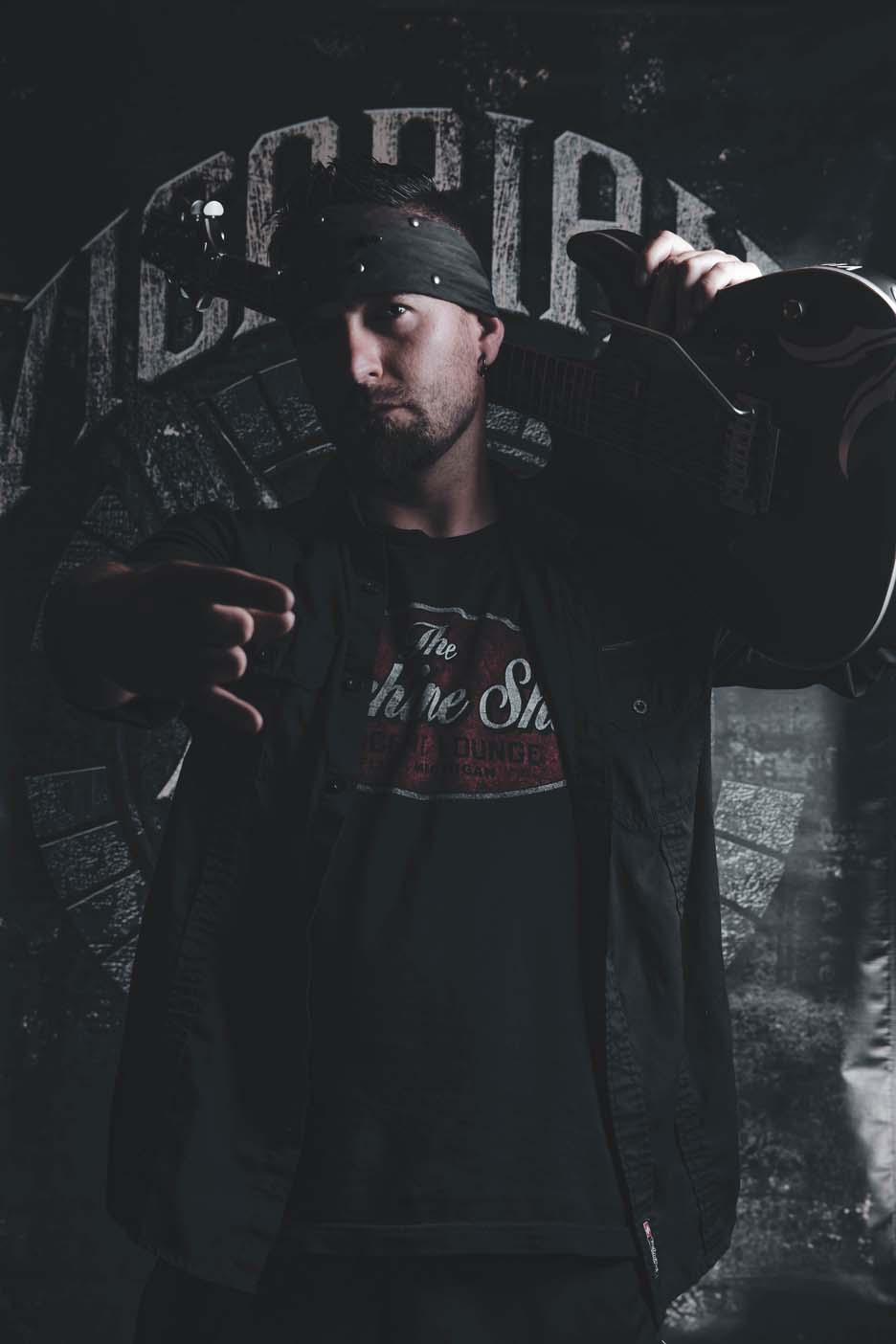 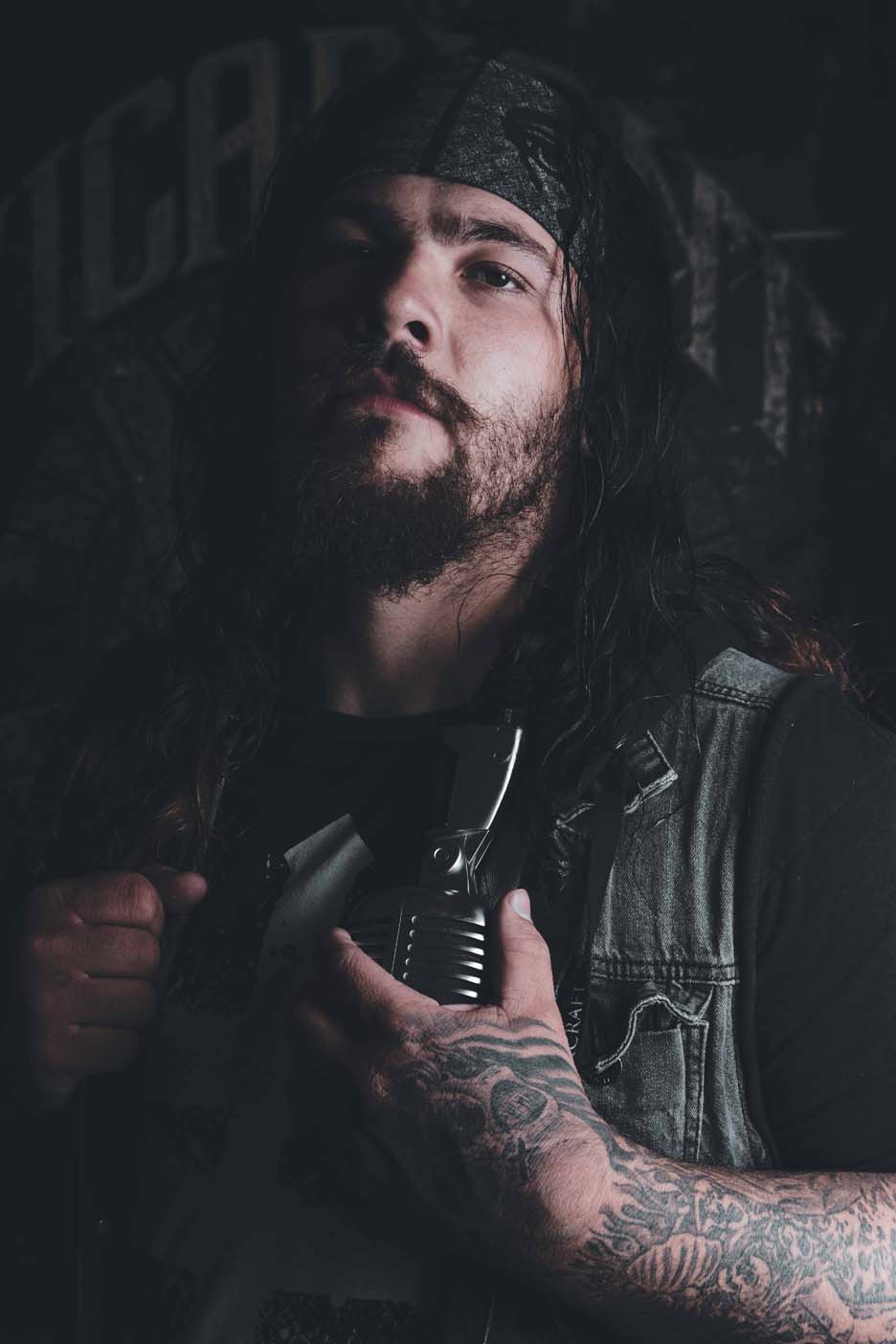 After a decade of metal, Vicariant is still going strong. The lineup has changed a little but the mantra is the same, “play an epic show, respect the fans, support each other and live.” As long as there is someone to play for, the band will continue to put everything and then some into their performances. “There is nothing like a live show,” says Held. “You just can’t replace it.”