As the century ended, Flint was poised to explode in both vehicle production and population. Carriages were going strong and utility companies were beginning to spring up around the city offering power to businesses and individual households. The mayors of this time period acted as stewards to the city’s upcoming growth and economic strength. At the turn of the century, an automobile hit Saginaw Street for the first time and forever change the city’s future, while one mayor would add something that would become iconic and central to Flint’s character.

This series chronicles Flint’s mayors throughout history, providing short accounts of their professions, lives and decisions in office (if known). Some were men/women of great deeds or of great controversy; some were simply placeholders in time. Each of them, however, chaired a city important to its country and its citizens on its path through triumph and troubles, and toward future revitalization. For Part 1, see the 2022 January issue of MCM!

Born in 1843 in Medina County, OH Ward moved at the age of six with his parents to Flint where he studied under his father as a brickmaker. When the Civil War started, he enlisted and served with the 4th Michigan Cavalry under General Wilson. He was there for the duration and part of the cavalry regiment that captured Confederate President Jefferson Davis near Irwinville, GA before he was able to flee overseas after the surrender of Confederate forces. Upon his return to Flint, Ward renewed his trade as brickmaker and expanded it to include construction. In fact, he and his associates were responsible for building many of the downtown structures and city blocks. Immediately after his stint as mayor and the death of his first wife, he took a contract to build the courthouse in Ottawa County. Upon arriving in Holland, MI Ward met Ms. Lucy Harrington, decided to stay and the two were soon wed. In Holland, he was elected city supervisor and then held the title of register of deeds for two terms. Near the end of his life, Ward continued to work in construction. His final job was repaving several city streets. A man who preferred to be busy, he would tell his friends that he would rather “wear out than rust out.” Ward lost a battle with cancer in 1914 and was buried in Lake Forest Cemetery in Grand Haven, MI. 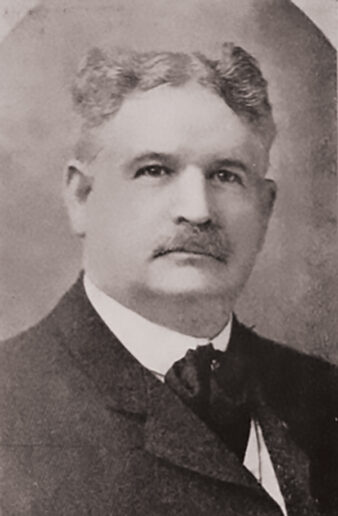 Born in 1852 in Onondaga County, NY McCall moved to Grand Blanc with his family at the age of 15. He worked with his father making harnesses until 1881 when he was elected deputy sheriff and turnkey of Genesee County. In 1884, he entered the race for county sheriff just three days before the actual election was to take place. With great public backing, he won and was easily reelected to a second term. While sheriff, four men were convicted of murder in the first degree and five men sentenced to life without parole – a sheriff’s record unheard of before his time. After his terms as sheriff, McCall entered the clothing business with partner Milton Pettibone while serving as city alderman for two years. After his mayoral term, he was once again elected county sheriff serving for another four years. After retiring from office, McCall left Genesee County to run the Dunlap Hotel in Jacksonville, IL and nearly two years later returned to Flint, where he died in 1916. In Flint, he held shares in the Flint Carriage Company, acted as Eminent Commander of the Knights Templar and was a member of the Flint FreeMasons. While in office, the Flint Telephone Co. began service. Arthur C. McCall was buried in Evergreen Cemetery.

Born in Frankfurt, Germany in 1835 Zimmerman emigrated to the U.S. in 1853. He arrived unable to speak a word of English and was taken on by Alexander Ward’s brick company as an apprentice working alongside Andrew J. Ward. In this position, he had a hand in building a majority of the city including Flint’s first two brick buildings: the Crapo store (1853) located on N. Saginaw St. and the Hazelton store (1854) to the south. The buildings were home to the business interests of former mayors Henry Crapo and Jerome Eddings. (In the Crapo building, it seems a mysterious love story took place as evidenced by a box of old love letters found hidden in a brick wall. The letters were addressed to Edward James Curren from a mysterious woman from New York … but that is a tale for another time.) After his mayoral term, Zimmerman acted as city alderman for as long as he was able. His son, John C. Zimmerman, Jr. was elected sheriff in 1904 and re-elected for consecutive terms. Zimmerman died in 1935 and was buried in Glenwood Cemetery. 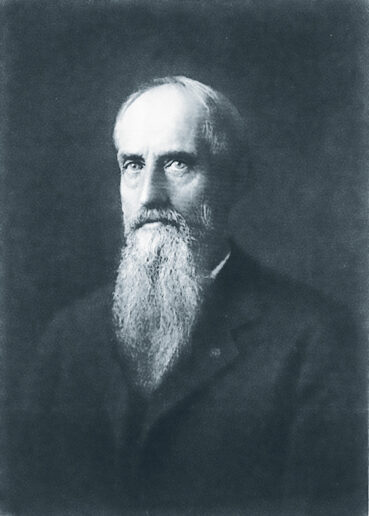 Born in Vestal, NY in 1837 Randall came to Flint in the early 1850s. When the Civil War broke out, he enlisted in the Army and served as a captain with Company K of the 23rd Infantry from Genesee County. He took part in numerous battles including Campbell’s Station, the Siege of Knoxville, the Capture of Wilmington and the battles of Atlanta, Jonesboro, Franklin and Nashville. He made it through unscathed and was mustered out of the Army in 1865. Upon his return to Flint, he went into business with his brother to found the Randall Lumber & Coal Company and quickly thereafter, the Randall Carriage Company. After his mayorship, he became the director and vice president of the National Bank of Flint. While Randall was mayor, even more carriage companies started operations in and around Greater Flint including the Diamond Buggy Co. and the Spot Cash Carriage Co. In 1927, the Industrial Mutual Association (IMA) bought the Randall Lumber & Coal Company property to build the IMA Auditorium in 1929. Randall died in 1909.

Milton C. Pettibone was born in Howell, MI in 1843 to farmer Roswell Pettibone and his wife Letitia. He was educated in Howell schools until the age of 19 when he joined the dry goods firm of Jewett & Crossman in Howell. In 1867, he migrated north to Flint taking a job as a clerk with Judd, McCreary & Avery. After five years’ work, he was named firm partner. Four years later, the partnership dissolved and Pettibone moved on to work with the legendary Smith, Bridgeman Co. In 1878, he opened his own clothing business and soon joined up with Arthur C. McCall to open Pettibone & McCall clothiers at 609 S. Saginaw St. The father of his wife, Elsie, was one of the first to bring thoroughbred cattle to the State of Michigan. Pettibone was active in most of the Flint social groups in his day including the FreeMasons, the Royal Arch Masons, the Genesee Valley Commandery, the Knights of the Maccabees and the Royal Arcanum. Pettibone died in 1916.

Coming to Flint from Cornwall, CT Gold was born in 1830 to a rich legal family. Following in the footsteps of his father, he studied law at Yale along with his two brothers, and was the only one to leave his hometown. As soon as he began practicing law in Flint, he gained notoriety as a man with skills equal to the likes of locals William Fenton and D. D. Aitken. He first settled in Pine Run at the county’s north end (Clio area) and taught school before beginning his affair with the law. In 1867, he moved to Flint and was elected to two terms as city recorder and then elected to 15 consecutive terms as city attorney. During that time, he also acted as judge of the probate court from 1868-1876. After his time as city attorney, Judge Gold opened a firm with lawyer Charles D. Long and then with lawyers Sumner Howard and William Newton. In 1888, he protected the holdings of Josiah Begole in court after his son Frank’s untimely death raised questions of ownership amongst Frank’s second wife and his infant son Paul and toddler, Josiah W. Frank’s second wife, Louisa, claimed that Frank verbally promised all of his lands and holdings to herself and her family without documentation. The case helped set precedent for the importance of legal and written documentation over witnessed verbal claims. While Gold was mayor, Kearsley Elementary School was built in Flint. He died in 1902. 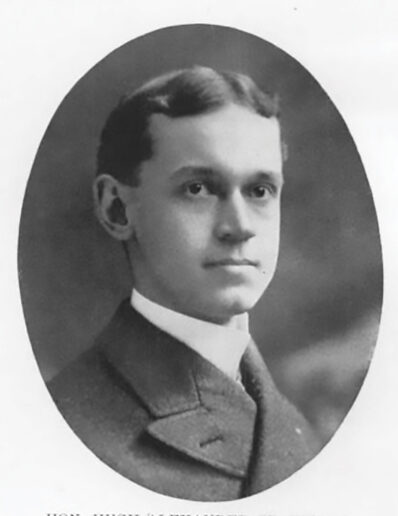 The youngest municipal executive ever elected in Flint, Crawford was just 26 years of age when he became mayor in 1899. He was born in Otisville in 1873 where his family operated a lumber company. He acquired his business and workplace knowledge on the job with his father while he worked to complete his studies at Flint High School. After graduating in 1891, he worked first as a clerk in M.E. Calkins Bookstore and then as a shipping clerk at W. A. Paterson & Co. Mr. Paterson soon took a shine to the lad and promoted him to superintendent of the Paterson Carriage Factory and private secretary to Paterson himself. During the 1899 mayoral election, the Democratic city convention needed a nominee to run against the Republicans; they chose and ran young Crawford without his consent.

He won the election by a large margin as many of the youth who had filtered into the city during the vehicle boom turned out en masse to vote. Even though it was something he didn’t necessarily want, Crawford took his role as mayor seriously. His administration was extremely successful in making substantial public improvements. For example, he implemented a new way of street-sweeping and cleaning known in the day as the “white wings” system that made a profound impact on a visitor’s impression of the city. Perhaps his biggest addition to the city, however, was commissioning Genesee Iron Works to build eight steel arches that were erected over downtown Saginaw St. In a stroke of genius, Crawford requested that each arch be outfitted with electric lights to illuminate the downtown atmosphere at night. Saginaw Street would be the first in Michigan to be lighted in this way. The arches, of course, became a Flint icon and, although they are no longer the originals, continue to line Saginaw St. Indeed, travelers headed through the heart of downtown Flint pass beneath the product of Crawford’s vision each and every day. Crawford was also heavily active in the many social groups of the day, belonging to the Genesee Valley Commandery, Knights Templar, Michigan Sovereign Conservatory of Detroit, Independent Order of Foresters, Knight of the Loyal Guard and Flint Order of Elks. He left the city in 1916 to pursue other opportunities throughout the state and passed away in 1951.

When Cumings took the reins as mayor, the city of Flint was poised to take the next step in its evolution toward becoming the Vehicle City of today. At the turn of the century, the first automobile made its appearance in the city, changing the course of its history. Cumings was born in 1872 and like Crawford before him, was very young when he was elected. He was another business whiz and investor who supported multiple social and cultural exploits in Flint. At 28 years old, he was elected mayor by the youth of Flint and continued the progressive policies of his predecessor to much acclaim. After his term, he acquired a significant interest in the Flint Wagon Works and then in the Buick Motor Company. In 1910, he worked with J. Dallas Dort and others to develop the Flint Golf Club and then again in 1917, with the founding of the Flint Community Music Association (the foundational building block of today’s Flint Institute of Music). Charles A. Cumings died in 1960 and was buried in Glenwood Cemetery.