Honor, dignity, humility, service, respect. These are a few words that come to mind after meeting with Rico Phillips, a longtime Flint firefighter who recently brought home the NHL Willie O’Ree Community Hero Award. The award recognizes an individual who, through the game of hockey, has positively inspired his or her community, culture or society. Willie O’Ree is a Canadian former professional ice hockey player, known best for being the first black player in the National Hockey League and for his community service. “He broke the color barrier,” says Phillips. “Today, he is known as the Jackie Robinson of hockey.” 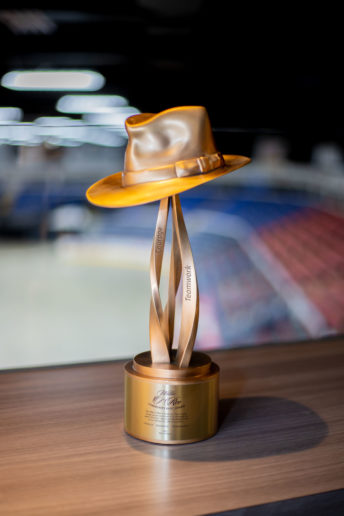 Phillips founded the Flint Inner City Youth Hockey Program (FICYHP), which provides a free introduction to hockey for children who otherwise would not have the opportunity to play the sport. Through the game of hockey, the program teaches life skills such as sportsmanship, character and cultural diversity.

My City Magazine sat down with Phillips to talk about the award and what it means to him. “I never would have imagined getting an award of this magnitude!” he exclaims. This is how his journey unfolded.

Born and raised in Flint, Phillips has three sisters. He graduated from Southwestern High School and always dreamed of becoming a firefighter. When he was seven years old, he begged is father to take him to the fire stations to see the trucks. “From that moment forward, I knew I would be a firefighter,” he remembers. He has been with the Flint Fire Department for 27 years.

While in high school, Phillips served as the student athletic trainer, taking care of injured athletes. “It was an avenue leading me to where I wanted to be,” he adds. Ironically, when he was a sophomore, Phillips was assigned to work with the ice hockey team as a trainer. “I knew a little about hockey and I was intrigued by it,” he shares, “and when I saw my first game at ice-level as a trainer, I was hooked by the speed, the skill and the amount of passion the players had for the game.”

Phillips moved on to become a referee, which was quite challenging. During his first season, he was subjected to racial slurs and taunts from one of the coaches. “It became abundantly clear that the sport was not diverse,” he shares. “I stood there in utter disbelief and was so shocked, I didn’t know how to react. All this over a kids’ game!” The coach was penalized and removed from the game.

Phillips continued as the only referee of color for 33 years. The experience led him toward his mission of helping to diversify the sport in his own community. In 1998, he began pursuing his concept for a hockey program for inner city kids after learning that the NHL had a Cultural Diversity Task Force, which was headed by Willie O’Ree. Although the idea was there, Phillips (a young parent at the time) didn’t have the resources to make it happen. He received an offer of funding from an individual for ice time, but still needed funding for equipment. So, he went to Perani’s Hockey World and asked if they would be interested in contributing to his project. “Perani’s donated 54 sets of brand-new equipment, head to toe!” he exclaimed. “That was a godsend. This program would not have happened without Perani’s.”

“It was such a humbling moment. No words can describe it.”
Rico Phillips

In 2010, the FICYHP was set in motion but it was off to a rough start. The funding for ice time fell through. To make matters worse, Phillips broke his leg four weeks into the program while playing hockey. “My biggest fear was telling the kids how I broke my leg and still telling them that ‘hockey is fun!’” Despite that, 54 kids participated in the program, 35 kids completed it and one pursued a continued interest in the game. But Phillips soon discovered that it was too much of an undertaking for one person and the program was put on hold in order to pursue more funding.

In 2014, Timm Allen, a Boys & Girls Clubs board of directors member, called Phillips to ask him about FICYHP. Phillips told him funding was the holdup, and Allen arranged a meeting with Jamie Gaskin, the CEO of United Way of Genesee County. Phillips wrote a Recreation Grant to United Way for CDBG funding from the City of Flint. It was approved and in January 2015, the program began again. “Without Timm and Jamie, I wouldn’t be where I am today,” says Phillips.

After that, other funding sources began pouring in. The program has a paid instructor sponsored by ELGA Credit Union. Dort Federal Credit Union contacted Phillips to help, as well as the Mid-Michigan High School Hockey Alumni Team who provides the jerseys. The Flint Firebirds Foundation pays for ice time, freeing up the grant money for replacing equipment. “The Flint Firebirds Foundation is pinnacle to our success,” Phillips reports. The MTA is another sponsor, providing transportation to and from the arena. “That’s huge to me. We have eight to nine kids who wouldn’t be able to participate without MTA,” he adds. 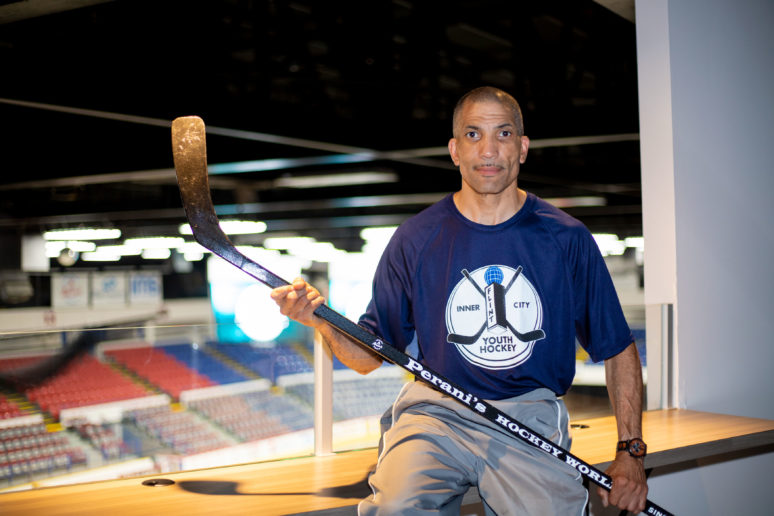 Willie O’Ree, who lives in San Diego, CA, came to Flint in March to participate in the final day of the FICYHP. “We got the treat of our lives having a living legend here in our backyard,” says Phillips. After O’Ree’s visit, Phillip’s wife, Sandy, learned about the Willie O’Ree Community Hero Award. She said to herself, “Wow. That sounds like Rico.” But the deadline for nominations was just six hours away. “Unbeknownst to me, my wife went out on a limb and nominated me,” Phillips shares. A month later, he was shocked when he received an e-mail congratulating him on being a semi-finalist. “My wife, with tears in her eyes, told me, ‘I nominated you.’ I was so touched. Sandy is my closest advisor, my best friend.”

About three weeks later, Phillips received a call from O’Ree, himself, telling him that he was one of three finalists – now, it was time for the public to vote. Four days after voting closed, it was determined that all three finalists would be invited to the 2019 NHL Awards Show in Las Vegas on June 19. “None of us knew who won. It was a secret until the name was called.”

At the awards show, Phillips was on pins and needles waiting for O’Ree to announce the winner. At home, the whole fire department was watching and rooting for him, as well as people from all over. When they announced his name, Phillips was ecstatic. Walking to the stage, he stumbled and almost fell and heard an audible gasp from the audience. “It broke the tension and I could be myself. I asked, ‘How’s that for an entrance?’” Before his speech, he thought about the advice given to him by his 18-year-old daughter: ‘Take a deep breath, breathe and give it all you got!’ “I did just that!” That night, Phillips received 200 congratulatory texts from people all over the world. “It was such a humbling moment,” he says. “No words can describe it.”

To Phillips, winning the award is about being a beacon of light for Flint and bringing the community together. And there are two very important lessons that Phillips teaches in the program that are not only important for the students to learn, but also a reflection of Flint’s resiliency. “The first lesson I teach them is how to fall down. The second lesson is how to get back up. It’s really a lesson about life. We all fall, but you have to be able to get back up again. The same goes for the city of Flint,” he says. “We are all doing our part to make this community stronger, healthier and more fun.”

Phillips proudly displays his Community Hero Award, a trophy inscribed with these words: teamwork, perseverance, courage. Phillips is a shining example of those words. He is well known in the community and admired for his service work with the fire department, teaching fire safety, attending community events and working with inner-city kids. “I get so many rewards from doing that.”