A well-known musician in the Flint area, his stage name is Blu Mykals – but most people just call him “Blu.” The solo performing artist plays five instruments: tenor, alto and soprano saxophones, flute and keyboard. He plays a variety of music such as pop, Top 40, country, Motown, smooth jazz and old jazz standards. His credits include performing in the backup band for one of Motown’s all-female groups – The Marvelettes – and has shared the stage with the world-renowned funk/rock/soul band, War. Traveling all over the state of Michigan and beyond, Blu performs at family reunions, weddings, anniversaries, graduations, private and corporate parties and other events.

Blu, whose real name is Michael T. Jamerson, was born and raised in Flint. He started playing the trombone in the fifth grade at Stewart Elementary School. His dad, Willie, a pastor, wanted him to play the trumpet. “He told me the trumpet was one of God’s first instruments,” Blu shares. One day his mother, Cordelia, was watching (famous trumpeter) Louis Armstrong on TV and asked her son to come watch with her. “I was inspired to be a trumpeter after listening to him blow!” Blu exclaims. But then, he watched a close-up of Armstrong pulling the trumpet away from his lips to sing. “Yuck!” he said to his mother. “What’s wrong with his lips?” She told her son it was called “trumpeters lips” and that is what Blu’s lips would look like after many years of playing. He thought to himself, “not MY lips!” He continued playing trumpet, but was a little less inspired.

Blu was more interested in playing the saxophone – he liked the way it looked and sounded – but neither his dad nor his music teacher wanted him to switch. “But my mom, she encouraged me to play whatever instrument I wanted to play,” he says. One day, Blu’s dad called him and said, “If I get you a saxophone, will you promise to still play the trumpet?” He agreed, but quit playing trumpet shortly after receiving the sax.

Blu finally had his saxophone, but couldn’t find anyone to teach him how to play it. He went to Shore’s music store on Clio Road and bought a book about how to play the sax. “I taught myself how to do it,” he says, laughing. “The sax is easier to play than the trumpet.” 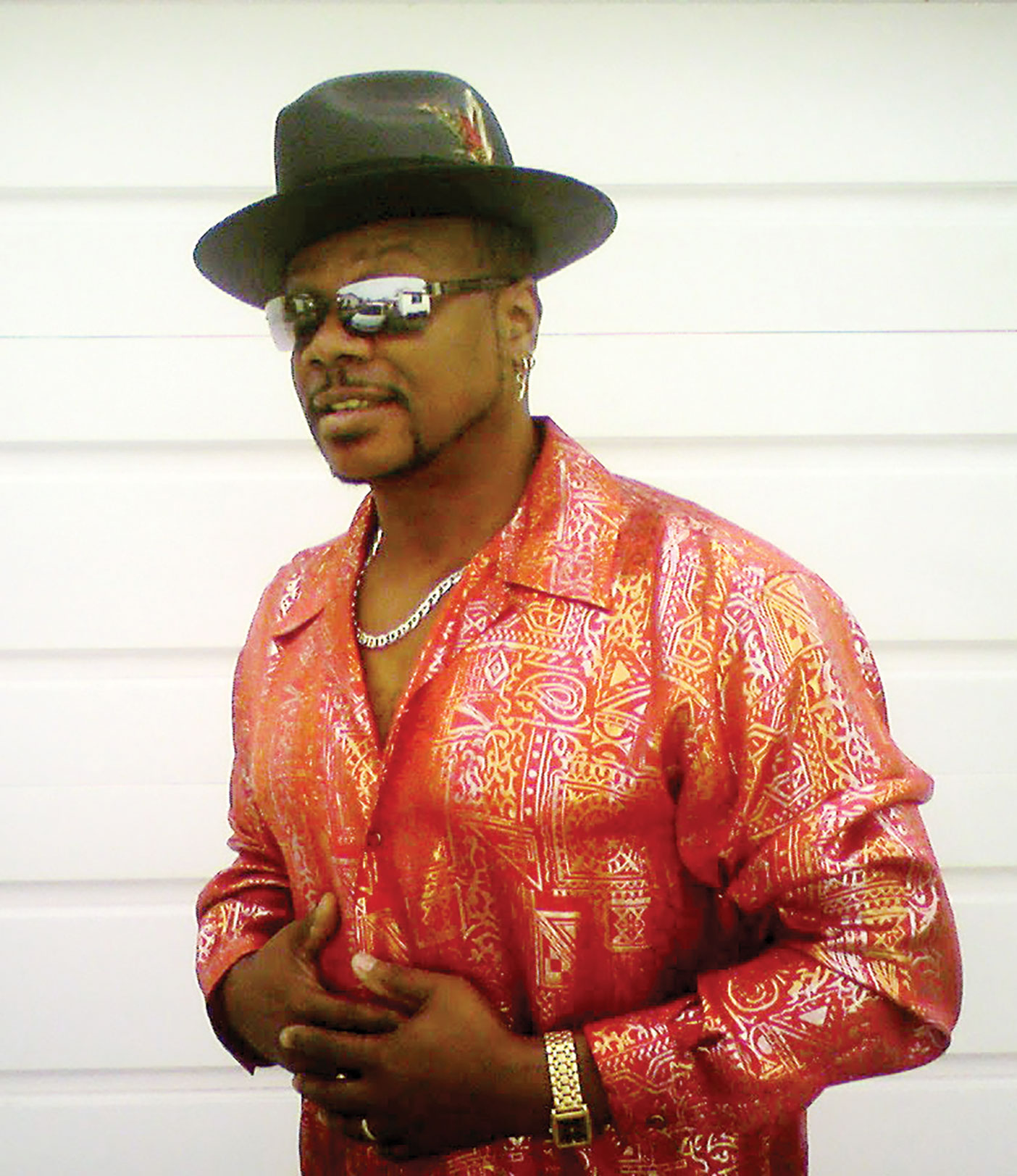 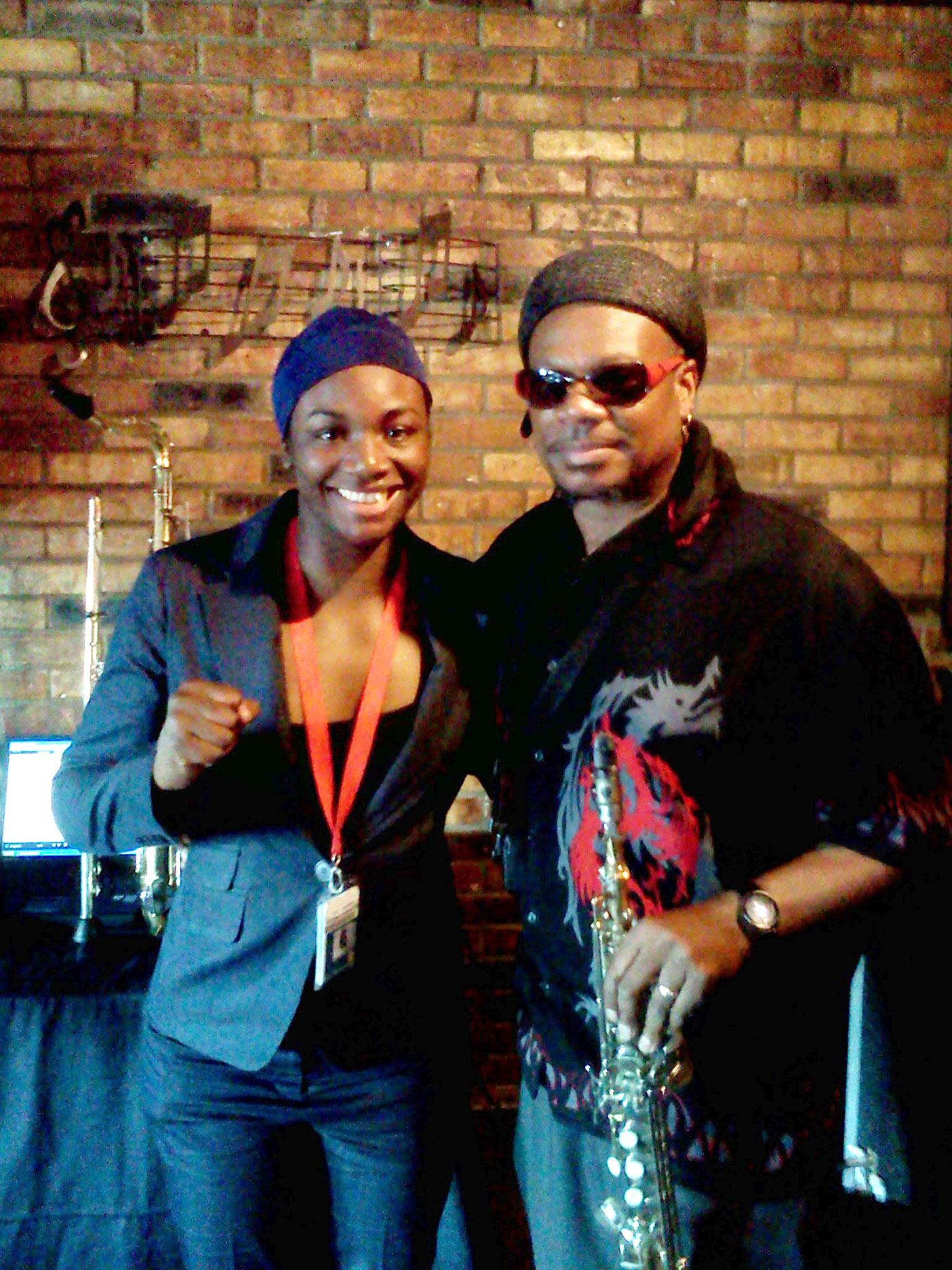 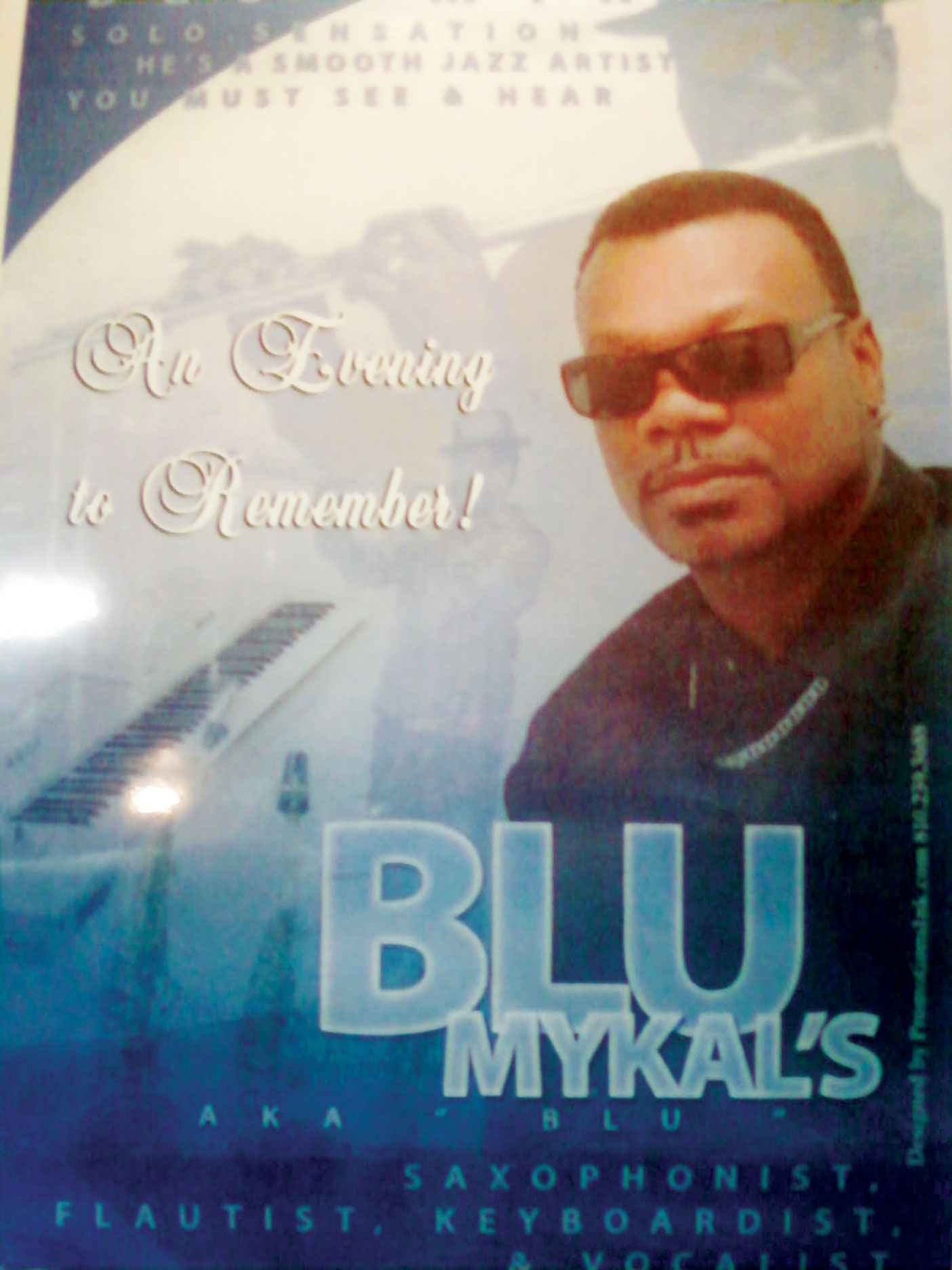 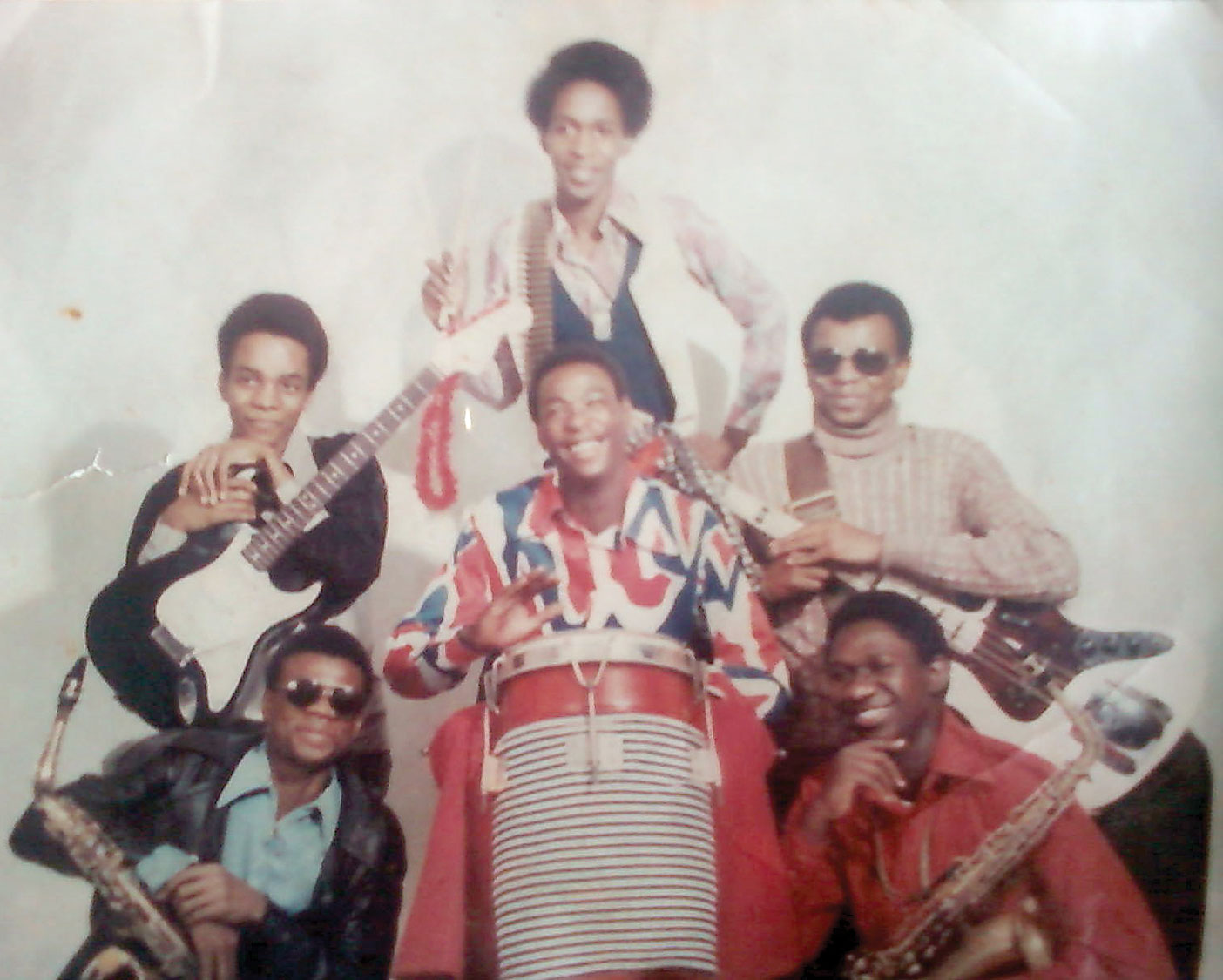 Throughout the years, Blu continued to learn to play other instruments and picked up the flute and piano in his early 30s. The list includes the tuba, French horn, clarinet, drums, bongos and congos.”For me, music is my medicine, my getaway,” he admits. He became interested in the flute after hearing a musician who owned a Flint instrument repair shop playing one. “It sounded so good!” Blu exclaimed. “I was fascinated by it from that point on and, once you learn the basics and the structure of music, you can play anything!”

At age 12, when Blu’s family moved to the Beecher/Mt. Morris area of Flint’s north side, is when the talented musician began to play professionally. He and his brother and some friends formed a band. “My brother was the bass player,” he remembers. The band’s first gig was at the Rose of Sharon Masonic Hall back in the 70s. “We played all types of music – all of the Top 40 – we played everything.” They performed all over and also played at schools and parks. “Wilson Park in Downtown Flint was the best place to play,” he shares.

Things began to change for the band in the 80s when disco and deejays became popular. “The popularity of bands died down,” the sax player remembers. He started working in construction during that time, but he and his band continued to perform. They did a lot of traveling for three to four years and then eventually, went their separate ways.

It was during this time that Blu enrolled at Mott Community College to study music. “Musicians who could read music did better,” he says with a smile. After about six months, he dropped out of MCC and decided to go out on the road on his own. He opened shows at The Pavilion and played sax for The Marvelettes.

As the popularity of bands continued to have its “ups and downs,” Blu became discouraged. This is when he learned to play an electronic keyboard which enabled him to make his own background music. He met up with a guitarist and they played gigs in the Flint and Detroit areas and all around Michigan. Unfortunately, they had a falling out and parted ways. “This is when I started doing shows by myself and when I took my stage name,” he remembers. “I have been doing solo shows since then.” Now, he continues to perform in Michigan and locally, at venues including Signature Chop House in Flushing, Warwick Hills Golf & Country Club, The Greater Flint Art Council and many others.

Blu has been told by many people that he is a gifted musician.”Even if you are gifted, you have to learn to take control of it, perfect it and master your gift to enable you to use it for its purpose and that takes practice, practice, practice.”

Blu plays a variety of music for his fans. “I play all kinds of songs – country, R&B, jazz, you name it. I have a lot of fans.” He refers to himself as performing “rhythm and groove,” not rhythm and blues.

“Music means everything to me,” he admits. “My mother would let me play all day. She was one of my biggest fans until she passed.” He dedicated Whitney Houston’s song “I Will Always Love You” to his mom on her 80th birthday. “People really enjoy listening to me play. I have to feel it. If I play with a feeling, then the people will feel it. I’ve got to feel a song – or put some feeling into the song.”

When on stage, Blu’s many instruments are lined up in front of him and each has a name. “My instruments are my girls,” he smiles. Their names are Cordelia (tenor sax), Angela (alto sax), Gloria (soprano sax) and Florence (flute), all of which have personal meaning to him.

What the musician loves most about performing is when his fans let him know how much they appreciate his music. “That is the cream of the crop for me. That’s why I do what I do. I enjoy my life and I don’t regret anything. God has been good to me.”