Click play and the music begins – a calming folk melody with a country feel, sometimes a little more bluesy or upbeat – it brings you back home. Back to warm days in the sun, walking the bricks of Saginaw Street in the heyday of Flint past. “Hello,” greets the soft voice of the host, “You are listening to Radio Free Flint. Thanks for joining us. Today, my guest is …” Settle in as the Radio Free Flint podcast rolls on through the past, present and future of Greater Flint.

Described as “dedicated to the beleaguered American city of Flint, Michigan and communities like it across America,” Radio Free Flint podcasts began in April 2020 and are hosted by the creator and former Genesee County Prosecutor, Arthur Busch. Offering informational discussions, videos and stories, the episodes showcase true crime, life histories and viewpoints of the people who have participated in the Flint experience – both today and yesterday. It was originally a Sunday morning radio show hosted by Michael Moore with support from the legendary local rock radio pioneer Peter C. Cavanaugh, Busch explains. “The show wanted to give truth to people in the city and that is something I think about.” During the pandemic, Busch found himself stuck in his St. Petersburg, FL retirement home, a hostage of his television set. He watched a news report about a water distribution center on Flint’s east side. “I felt helpless,” he remembers. Flint was going through a public health crisis that still was not sufficiently addressed and Busch wanted to help. “In Flint, I was very involved with civic life, even chairman of the Public Works Committee; but now I’m more of an outside observer,” he states. When a friend from South Carolina floated the idea of doing a podcast about baby boomers in society, Busch took the idea and refocused it toward the city he loved and Radio Free Flint was born. “What started as a hobby turned into a job with deadlines,” he laughs. “I’m releasing it in seasons now just to get a break.” 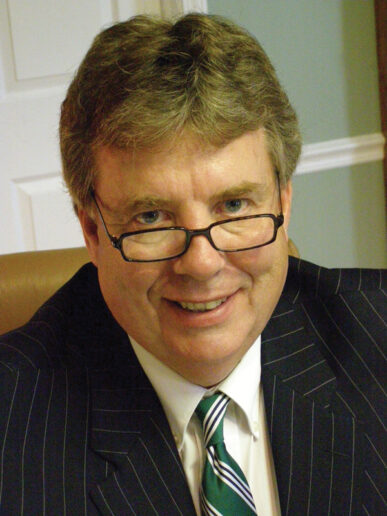 Busch grew up on Flint’s south side and graduated from Flint Southwestern High School in 1972. He then went on to attend Michigan State University where he earned his bachelors and master’s degrees. “I specialized in public policy at James Madison College at MSU,” he adds. “Growing up, I was very interested in city politics and it was a dream of mine to serve on the Flint City Council.” He went on to obtain a law degree from the Thomas Cooley Law School in Lansing. He immediately returned to Flint and took a job representing UAW 581 and then in 1983, took a position in Mayor Sharpe’s administration. At the age of 37, he was elected Genesee County Prosecutor and in that office handled nearly 700 homicide investigations (including the famous Margarette Eby case). He also successfully argued a case before the United States Supreme Court.

During his time in Flint, he served as Flint Township Commissioner, Chairman of the Board of Jobs Central, Inc., and Chairman of the Public Works Committee. He was also a board member of the Genesee County Parks & Recreation Commission, Genesee County Planning Commission, VAAA, and Urban League of Greater Flint. “One of the things I am most proud of is that I put together the Bishop Airport Authority that helped make today’s airport a reality. I can’t help but smile every time I fly back to Flint,” he adds. With all of his experience in Flint, he has amassed a large rolodex of people he invites to be on his podcast including musicians, athletes, writers, lawyers and government professionals who speak on a wide array of topics.

“On one of my most listened to casts,” he shares, “I had a young musician from Flint named Joe Ryan III who wrote a song about the water crisis with his grandmother who still lives in Flint. That one went viral.” Other Radio Free Flint podcasts focus on Flint’s history, culture, current events and institutions. Past guests include Flint’s Poet Laureate Semaj Brown, hockey’s Rico Phillips, Judge Duncan Beagle, Rev. Robert McCathern, author Connor Coyne and many others.

“My goal is to go in-depth into the subject matter to get people to think or to present issues that have affected and continue to affect the city,” he explains. “I also found out that listeners are tired of conflict. Most of them want something to make them feel better and I include some of that as well, by focusing on history.” Not all podcasts are bright and sunny, however. Busch is not afraid to bare the truth about the circumstances concerning Flint. “I spoke to an expert on deindustrialization from Nuremberg, Germany and some of what he had to say was alarming,” he says. “It really made me question whether Flint can make it in its current form.” Sometimes others don’t like to learn what he has found. “I did an episode on Buick City and it got the attention of GM,” Busch laughs. “I couldn’t believe they took the time for the podcast.”

Busch is always surprised, encouraged and sometimes shocked by what his guests have to say and by what he uncovers during his research. “I’ve really learned a lot,” he states. “My biggest surprise has been the whole ‘Flintstones’ thing – this collective identity has emerged in the heads of anyone from Flint including the suburbs.” During conversations with his guests, he has found that being a “Flintstone” can mean something a little different for everyone. Commonly, the term refers to the resilience and toughness attributed to the city and its citizens. Nearly everyone who has come from Greater Flint has taken pride in being able to wear the Flintstone label, especially those who have left – such as Joe Ryan III, Terry Crews, Kyle Kuzma, Glen Rice and many others from all walks of life and professions. It’s also about giving back and staying true to your roots. For the older or “golden”generation, aka “boomers” it means even more. “It’s about the memories,” Busch explains. “It’s about remembering all of the best of Flint and sharing in that memory. Safetyville and the old IMA come to mind.”

Busch only visits Flint now from time to time but the love for his old stomping grounds shines through during each and every podcast episode, whether he is uncovering a secret, reminiscing with a friend, or looking for a solution to the many problems Flint faces. His conversations and research have given him a unique viewpoint on the city’s future. “I think the best way forward for Flint is for the people to come together and work collectively on making their corners and neighborhoods better,” he advises. “Put a light in their corner. The city needs to also forget about what Flint isn’t and realize what Flint IS. Change the philosophy and truly determine the size the city needs to be.”

Arthur Busch has always put his heart and soul into the City of Flint and now, from afar, he continues to do so through heartwarming and informative stories and interviews on Radio Free Flint. “It’s my gift to the city,” he states with a smile.

To enjoy more than 80 (and counting) interesting podcasts about Flint and its inhabitants, visit radiofreeflint.media or visit the Radio Free Flint Facebook page.