Everything about the gritty, blue-collar basement boxing gym at Berston Field House seems to embody Flint. The atmosphere, aesthetics and attitude found here capture the spirit of the city.

This sometimes-sweltering room, awash in purple and yellow, is where the FWC Berston boxing club members gather to practice the sweet science. Every weeknight, trainers Jason Crutchfield and Eugene Gill welcome roughly 15 – from novices to champions.

Boxers hone their craft in a ring containing the names of club founders and legendary trainers Floyd Fielder, Lissus Walker and Dee Cavette and on punching bags of various colors, some repaired with tape, hanging from the ceiling.

Adorning the walls are photos of Berston’s champions and four title belts they have won along with mirrors for instruction. Treadmills and mats for conditioning are pushed up against them.

Here, the equipment is functional, not fancy. 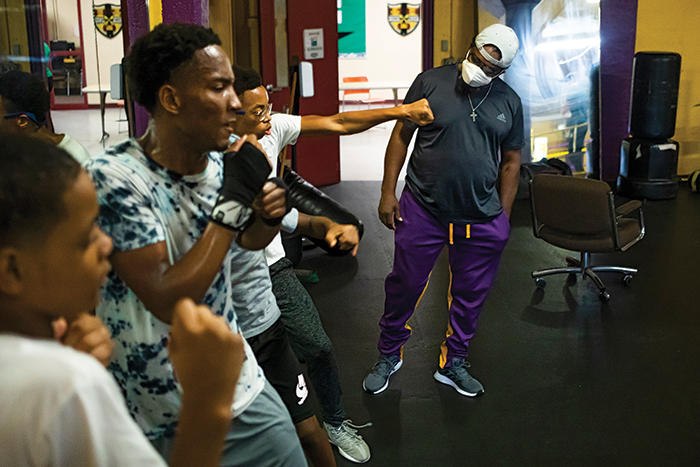 “We have everything we need here to run a quality boxing program,” says Crutchfield, a four-time Michigan Golden Gloves Champion who is nearing three decades as an FWC instructor. “The biggest thing is replacing bags because eventually, they become worn out; but all the equipment we have works great for us.”

This place of no frills has produced boxers who have provided countless thrills, perhaps none bigger than two-time Olympic Gold Medalist and unbeaten Women’s World Unified 154-pound and 160-pound Champion, Claressa Shields. She is second in ESPN’s current pound-for-pound women’s rankings.

World Champions Chris Byrd and Anthony Dirrell have also spent time training here along with Olympic bronze medalist Andre Dirrell, who has fought for world titles. Professional junior middleweight contender Ardreal Holmes, who is 12-0, also got his start at Berston and is training here again. 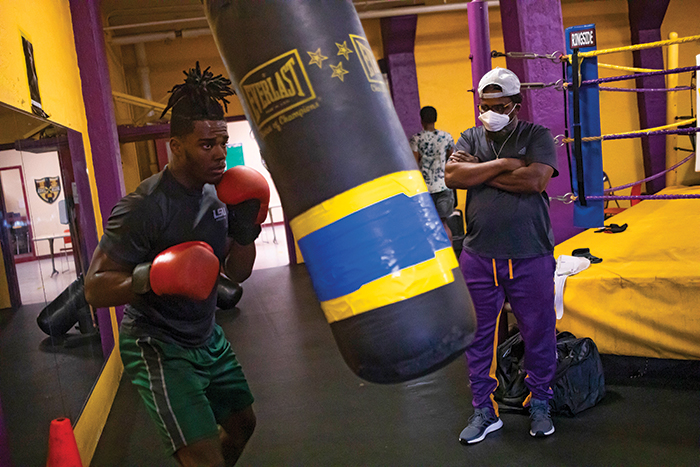 “Being part of FWC Berston is about more than boxing, it’s like a family,” says McElroy, who has won three national tournaments and is already in his 11th year with the club at age 23. “Coach Crutchfield has been a part of my life since I was a kid and has greatly impacted my life. He is just a great person who (provides) great coaching that boxers respond to.” 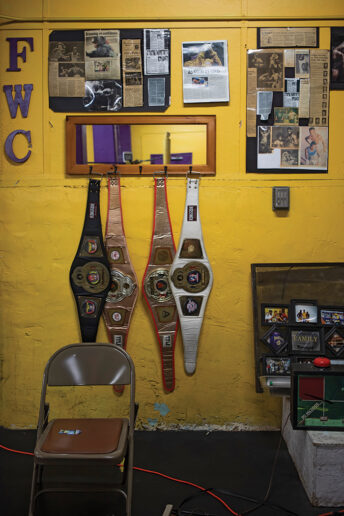 McElroy is not the only member of his family influenced by Crutchfield. Ardreal Holmes, his older brother, joined FWC Berston first and later encouraged McElroy to join him. After seeing what boxing was doing for Holmes, McElroy didn’t require much coaxing.

“Ardreal definitely inspired me to start boxing because I saw all the attention he was getting after he started bringing home trophies and stuff,” he says. “I wanted some of that same attention.”

Success came quickly for McElroy, who won his first seven bouts and began racking up accomplishments while absorbing the teachings of Crutchfield and Berston’s other trainers.

In addition to national titles, he is a four-time state Golden Gloves champion, just like his brother, has been ranked as high as second in the nation by USA Boxing in the 152-pound weight class and was named Michigan’s 2017 Amateur Boxer of the Year.

All those accolades are the result of dedication and discipline instilled at Berston. McElroy juggles boxing with a full-time job at Kids Foot Locker and usually squeezes in a run or other conditioning exercises prior to two-hour weeknight training sessions.

“I just took to all the training really fast and winning the first seven fights really gave me the confidence to keep going and fulfill my potential,” he says. 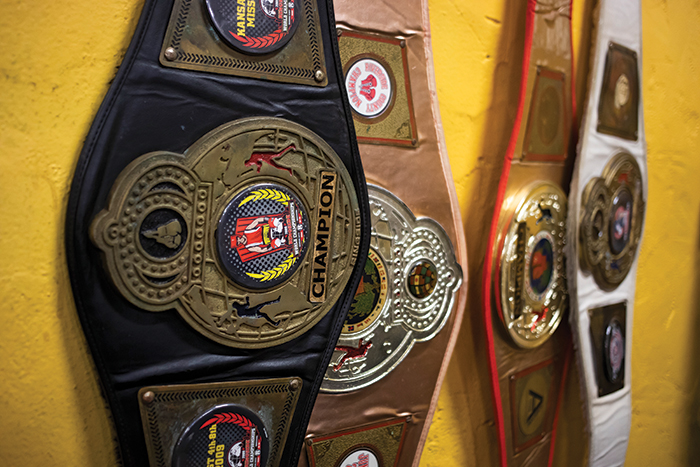 Not to be outdone by his younger brother, Holmes rose to the top of the 147-pound national rankings and reached the 2016 Olympic Trials championship match, making him an alternate for the Games.

Holmes, who turned pro in August of 2016, is tentatively scheduled to fight on Showtime later this year. 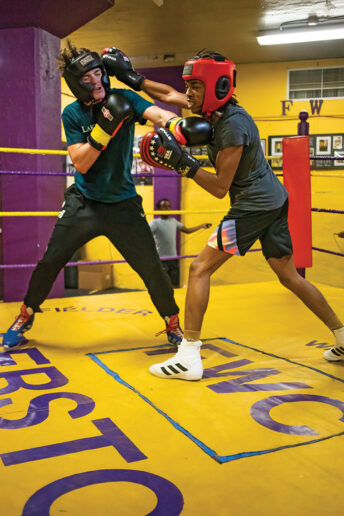 Adam Lagueux and Robmetric Callaway, both 18, practice in the ring.

“Having Ardreal back in Flint training with us has been awesome,” Crutchfield says. “He is really on track with his pro career and we’re obviously excited about what’s next for him.”

McElroy is excited about training in the same gym with his brother again.

“Whenever one of us watches the other train, we can see and have a sense of what each other needs to work on,” he says. “Ardreal doesn’t hesitate to look over my shoulder, telling me what I’m doing wrong which really helps. We have a great connection through boxing and there are things said that probably only brothers can say to each other.”

The success McElroy and Holmes have achieved in the boxing ring and as human beings serves as a prime example of what keeps the 58-year-old Crutchfield passionate about dedicating himself to the club while also working full-time as a cable television contractor and remaining a devoted family man.

“What keeps me going is that I want to make all the boxers who come to Berston champions, but equally important is helping them stay on the right path in life,” he says. “Being dedicated to boxing gives them some structure, consistency and stability in their lives. That’s why I feel our program is very important for the community.”

Crutchfield’s association with the club dates to the late 1970s when, like McElroy, he was urged to join by his brother who already had.

“I probably started there when I was about 14 and it was because of my brothers joining first,” Crutchfield recalls.
“Like most boys growing up, I wanted to do what my brothers were doing.”

After getting a taste of Berston boxing, Crutchfield left for a few years before rejoining the club at age 17 and winning seven city titles in addition to his state championships. He also met Trainer Eugene Gill during that time and the two have been friends ever since. 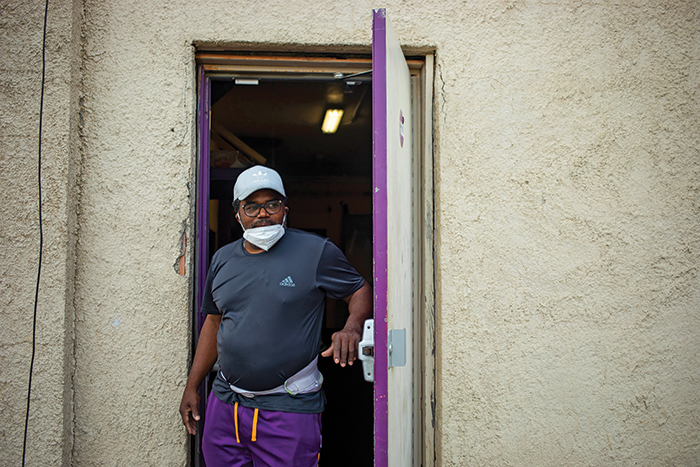 Crutchfield also feels fortunate to have worked with all three of the club’s founders, who first trained boxers at the old Flint Interracial Community Center before moving to Berston about 60 years ago.

What keeps me going is that I want to make all the boxers who come to Berston champions, but equally important is helping them stay on the right path in life.
Jason Crutchfield

Dee Cavette and Floyd Fielder are both Greater Flint African American Hall of Fame members. Cavette is also in the Michigan Amateur Sports Hall of Fame.

Their tutelage helped Crutchfield launch his professional career and in 1990, he continued his development under one of the most successful trainers in boxing history. That’s when Crutchfield joined the iconic Kronk Gym in Detroit run by Emmanuel Steward, who trained an astonishing 41 world champions before his death in 2012.

Crutchfield racked up a 7-1-1 record with five knockouts through 1993 before ending his career in part due to family matters that required his attention.

“I was feeling I had accomplished all I could in boxing and that’s why I drive the guys I train so hard because I want them to get the most benefit out of the sport and maximize their talents,” he says.

Crutchfield’s boxing hiatus was short-lived, however.

Not long after Crutchfield’s final fight, Lissus Walker announced he was leaving FWC Berston to become a minister. Crutchfield was asked to replace him.

“The timing actually worked out pretty well when they wanted me to step in and coach,” Crutchfield admits. “I was ready to do that.”

Roughly 13 years later, an 11-year-old girl who would become Crutchfield’s most famous pupil, walked into Berston’s gym. At first, Crutchfield was reluctant to work with Claressa Shields, but soon changed his mind upon seeing how she was getting the better of most boys.

Crutchfield took Shields under his wing in more ways than one. Due to a turbulent, inconsistent home life, she even lived with Crutchfield and his family for a time.

“Claressa is the only one I’ve provided a place to stay during my time at Berston,” he says. “I won’t hesitate to do it again, though, if I feel it’s necessary.” 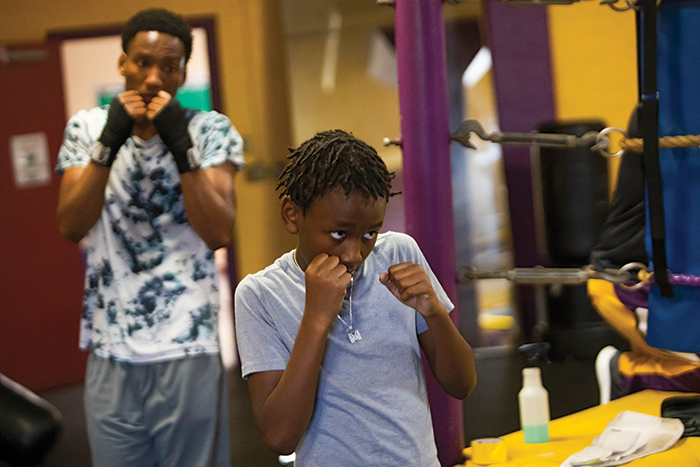 Makai Taylor, 12, works on his stance.

A mere six years following their first meeting, Shields was a gold medalist.

“Jason was like a second father to me,’’ Shields told the New York Daily News in 2019. “He always told me the truth and led me in the right direction.’’

McElroy, Chris Thompson and Sardius Simmons certainly feel Crutchfield is leading them in the right direction.

Thompson, 29, has been with Berston for 11 years and captured his third Michigan Golden Gloves title in four years in May with a 5-0 victory in the 178-pound title match. 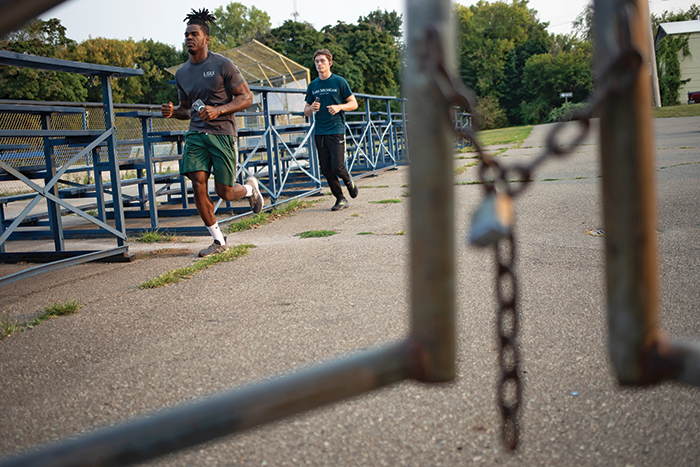 Simmons, 28, was a national Golden Gloves champion in 2016 before rotator cuff surgery on both shoulders sidelined him for several years. Finally healed, Simmons took the state heavyweight crown this year with a 5-0 decision in the title match.

McElroy, meanwhile, scored the most impressive victory in the state tourney, edging defending champion Justin Lacey-Pierce, 3-2, in the 156-pound final and earning a measure of sweet revenge in the process.

Lacey-Pierce, ranked No. 1 in the nation at 71 kilograms, beat McElroy by the same score in last year’s Golden Gloves state championship bout before winning a USA Boxing national title.

Unfortunately, only Thompson won a bout at the National Golden Glove tournament in August. He opened with an impressive 5-0 win over Pennsylvania’s Damian Tinnerello, ranked No. 10 in the country at 80 kilograms.

Thompson, who reached the semifinals of the 2019 national tourney, dropped a 3-2 decision to Texas State Champion Julian Delgado in his second match.

“I feel fortunate to have worked with all those who have come to us as young kids with little or no boxing experience and then put in the work to have success,” Crutchfield says. “To watch them grow and develop and coach them in big-time events like the National Golden Gloves is special. I always want them to win more, but just taking three to nationals in one year is a big accomplishment.” 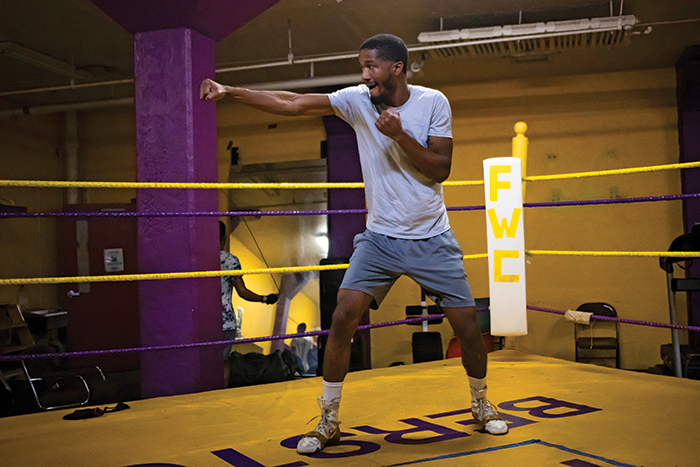 Professional junior middleweight contender Ardreal Holmes (12-0) also got his start at Berston and is training there again.

“I feel I’ve gained the experience and developed the skills needed to be a professional,” he says. “I’ve been talking with Jason and Eugene and the goal is to schedule my first professional fight by the end of the year, which is really exciting.”

After spending more than a decade under Crutchfield’s guidance, McElroy will undoubtedly be well-prepared.