Whenever and wherever you meet Michael D. Melet, you can be sure of two things: 1) He’s got something special in the works, and 2) In his coat pocket or his bag is a small sketchbook and a pencil – his steady traveling companions. “I take a pad of paper with me and I draw every day,” he states. “I draw what I see at the moment. It keeps me busy.” The pictures he dubs “waiting fors” happen spontaneously whenever he sees something that piques his interest, usually during the quiet periods when he is waiting for something else such as picking up a grandchild, waiting for a meeting to begin, or a show to start. His sketchbook contains images such as a man at a piano, the back of heads in an audience, a piece of scenery, etc. The drawings are simple but it was one of these “waiting fors” that led him to his second career as an artist and his first exhibition at Buckham Gallery in 2011. 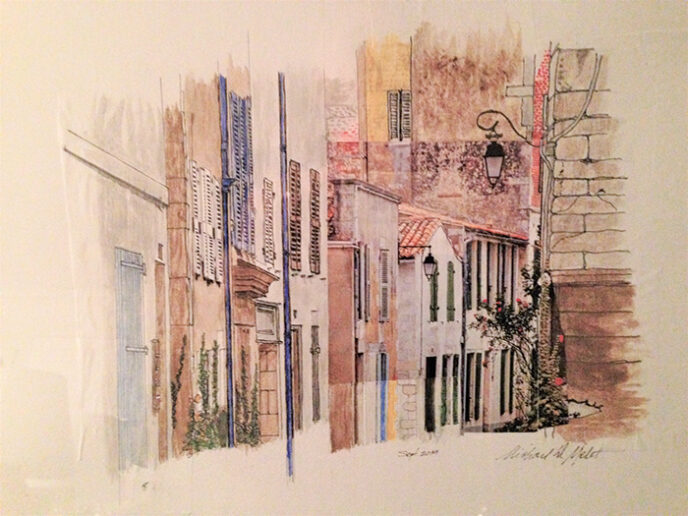 Born and raised in Flint, Melet attended Cook, Longfellow and Zimmerman schools until finishing high school at Cranbrook School in Bloomfield Hills. After graduating, it was always his goal to work with his father in fashion back in the city of his birth. In Melet’s youth, Downtown Flint was bustling and his family was part of the reason why. They owned and operated the iconic Vogue Fashion Store on Saginaw St. and young Michael couldn’t wait to contribute. “After I graduated high school in 1958, I was accepted to the University of Michigan,” he recalls. “I wanted to start working immediately but my father believed that everyone should have a college education and I couldn’t convince him otherwise.” However, after a stint working in New York’s garment district and his sophomore year at college, Melet was allowed to join his father and officially embrace Flint. He was given the reins of the business in 1972 and took it as far as he could, while at the same time serving on boards including Flint Institute of Arts and Buckham Gallery. It was while serving on the board for Buckham when a casual glance over his shoulder shed light on a talent that had been kept behind closed doors.

“I’m sticking with collage for now – although, I was thinking about going back to the beginning and working with watercolors and pen & ink. Take it back to my first show, so to speak.” 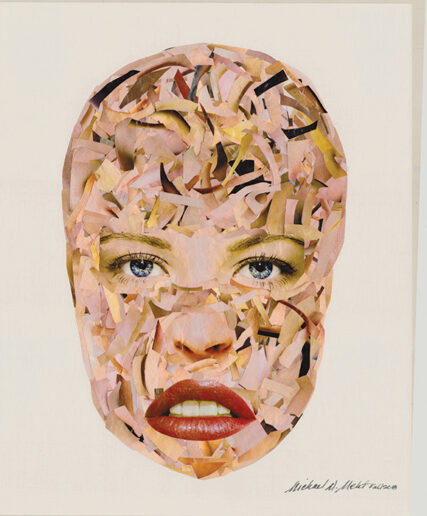 Melet had been a private artist nearly his entire life. He worked at and appreciated art in secret, collecting art literature (he and his wife boast a library of over 3,000 art publications), fashion and art magazine clippings, and hundreds and hundreds of personal drawings. “I doodled and sketched all the time,” he says, “and I keep all of my sketches. I have files and files of them.” (One of his shows included a 4ft. by 4ft. creation called “Waiting For” where he displayed a good portion of the sketches.) As he was sketching during a Buckham board meeting, another attendee noticed and appreciated his picture. Buckham Gallery co-founder Sam Morello got wind of it and inquired. “I had more sketches and drawings at home along with a few paintings
I had done,” remembers Melet.
“I never showed anyone. Morello took a look and convinced me to do a show.” His first show was well-received.

At that point, Melet got serious. He expanded his skill set and began exploring mediums beyond sketching, drawing and painting. His portfolio includes sculpture, glass, acrylics, mixed media and collage. His most recent show in December 2022 entitled Recent Work features charcoal drawings and nine collages, each representing a primary color and his fashion-dedicated past. “Each collage is made of clippings I have made from fashion magazines over the last 40 years of my life,” he explains. “Anytime I saw a photo or object in a magazine that I enjoyed, I kept it. I have file cabinets full.” The clippings were separated based on color and arranged in any way he seemed fit … with a few added surprises. Each collage includes a few unusual things and, for those paying close attention, each one has eyes. As you are looking at them, they are looking back at you. 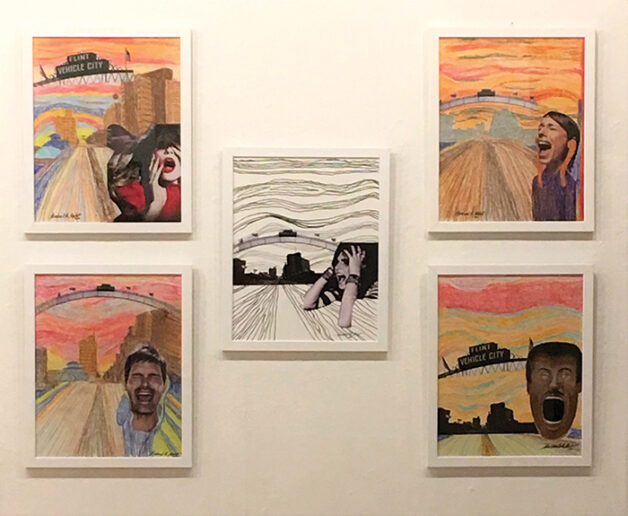 Melet created one of his most impactful art series in response to the Flint water crisis. According to him, it epitomized everything he saw, heard and felt at the time.

Melet created one of his most impactful art series in response to the Flint water crisis and it accurately reflects Flint’s collective mind at the time. “I was asked to do a piece for the Flint water crisis and the first thing that popped into my mind was ‘The Scream’ by Edvard Munch,” he says. To create the series, Melet dove into his magazine clippings. Paying homage to Munch’s style, he drew five illustrations of the city and matched each to a magazine clipping depicting a screaming head. According to him, it epitomized everything he saw, heard and felt at the time.

“I take a pad of paper with me and I draw every day. I draw what I see at the moment. It keeps me busy.” 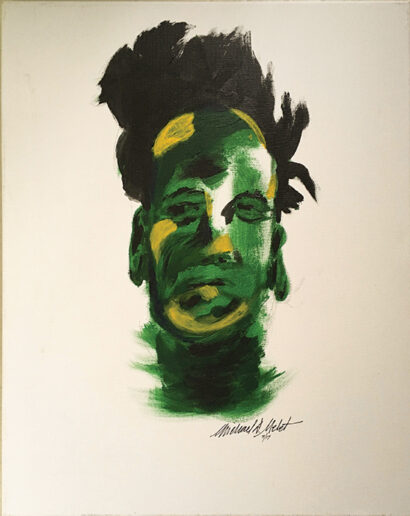 Going forward, Melet is content to further explore his current medium. “I’m sticking with collage for now,” he says with a laugh. “Although, I was thinking about going back to the beginning and working with watercolors and pen & ink. Take it back to my first show, so to speak.” He is also working on finishing two books. One entitled “Family, Flint and Fashion” is an autobiographical account of his time growing up, running a business and playing a part in the city he loves. The other will be a book of photographs taken by a dear friend recently lost – the fulfillment of a promise.

Wherever the future takes Michael D. Melet, he will be waiting, pen and paper in hand, for his next idea or moment of inspiration and you can bet that whatever he creates will certainly be art worth waiting for.