For Doris Sain, 82, every decade of her life could be the subject of its own novel. Those decades are filled with adventure, learning, networking, building relationships, and mostly opportunities she discovered – or created for herself.

“I think I’ve lived about three lives,” Sain laughs, “and I’m not afraid of a new challenge.” In the mid-1980s, she founded, with the help of Court Street United Methodist Church, a 12-acre spread known as Court Street Village Non-Profit Housing Corporation, which is still in operation and provides housing options for senior citizens and people in need – a segment of the population for which she has deep compassion.

Lately, Sain counts on Norma, her daughter, now the executive director of Court Street Village, to help write grants to procure funds for their latest ventures and projects. 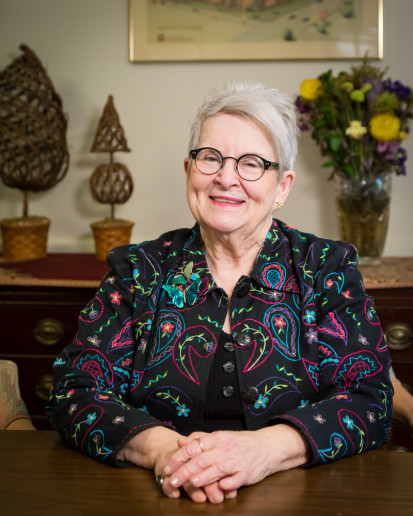 Norma’s mentored by the best. “She’s a great teacher,” Norma says about her mother. “She’s taught me so much about these downtown neighborhoods.”

“Court Street Village has rehabilitated 45 homes in four neighborhoods to help stabilize it,” says Norma. “A safety initiative project converted an old lighting system into modern LED-lights throughout the neighborhood. It allows residents to feel safer and if you drive around, you can see the impact; it’s brighter, crisper and clearer – it’s gloriously lit up.”

Long-lasting work like this is what Sain’s legacy to Flint is all about. “The new LED lighting is maintenance free for up to 20 years and will provide significant savings to the City of Flint and neighborhood residents,” she says.

It’s not surprising that Sain is a woman of many titles, awards and honors, including induction into Genesee Regional Women’s Hall of Fame a few years ago. Through the years, she served on the boards of many organizations in Flint. “I can’t remember all of these titles,” she laughs.

First and foremost, she is a mother to eight children, 13 grandchildren and eight great-grandchildren, and the wife of her late husband, Danny, who supported her risk-taking (which always seemed to pay off) and community involvement for 50+ years.

Professionally, Sain is the vice-president of advocacy for the League of Women Voters of the Flint Area and a recipient of the Making Democracy Work Award; a member of Stockton Center Museum at Spring Grove; a member of Zonta Club of Flint, a business women’s service group; tutored at-risk kids in Beecher in the 1970s, which led to establishing Common Concern, a non-profit drug intervention program; was the first woman to sit on the YMCA Board of Directors and received the Nina Mills YWCA Award; is a member and volunteer at Court Street United Methodist Church; volunteers and advocates for the hungry and poor at Riverside Tabernacle Church; was a licensed real estate, insurance and securities specialist; and once owned and operated her own business in Arkansas called Sain’s Stripp Shop.

She actively contributes to causes and groups. In fact, she says she derives joy from her weekly connection to Riverside Tabernacle’s food outreach program as one of 20 volunteers who pack 650-1,000 bags of groceries to distribute.

Sain has been known to get in her car and actually go out to find genuinely hungry people. For the past 12 years, she’s made her own deliveries to homes where she knows needy people live.

“I love knocking on doors,” she says. “That’s how I know what’s going on.” Her door-to-door efforts brought stark realization to her own eyes. “There are people with no refrigerators, no stoves and no extra money at the end of the month. I know some who put milk and meat between their storm door and trailer door to keep it cold in the winter.”

Hard times and hard work hardly deter Sain from her mission of advocacy and love of helping people. “I’ve always wanted to serve others,” she says. “It all stems from my early involvement in church. I’ve always been the kind of person who gets more and more involved.”

Sain, the daughter of an Arkansas cotton farmer-father and substitute school teacher-mother, believes the key to any of her successes has been rooted in two things: her family and her church.

She recognizes the first time her father placed his trust in her as the building block of her confidence to try new things.

“I’ll never forget the day my father handed me the keys to his two-ton truck that you had to double clutch,” Sain says. “Man, did I feel powerful! I felt strong and in control.” As a young teen, her admiration for her father transformed her the moment he placed her in a position of authority on the farm.

She recounts another early turning point.

“I was 13 years old and sitting in the front pew when the church pianist wiggled her finger at me. She told me to put on a choir robe and join the choir,” Sain says, acknowledging this as the beginning of many opportunities to come her way.

“Opportunities would just come to me,” she says. “How could I say ‘no’? It started right there. From then on, I learned what I could, gained knowledge, confidence and poise, opportunity after opportunity.”

That knowledge and confidence would expand and continue for the next seven decades.

She got the entrepreneurial itch in the 1970s, after her husband suffered a heart attack and she realized she might one day have to support her eight children. “A good friend taught and trained me in the art of stripping and refinishing furniture,” she recalls. “I fell in love with it, but didn’t want to compete with her business, so I took a chance and asked my husband if he’d support my dream of owning my own shop in Arkansas. I packed up four kids and left him the other four kids. We had an agreement that I’d work to get my furniture shop started and in one year, we’d evaluate whether or not to move.”

In Arkansas, she didn’t waste time. In her own words, she certainly “woke up the town of Jonesboro” when she opened up Sain’s Stripp Shop. “The name alone drew people to my shop,” she laughs. In ten months, she had a viable, thriving business and couldn’t wait to tell Danny it was time to relocate.

But Danny had other plans.

“He was very involved in the UAW at General Motors and rising in his job,” says Sain. “We both knew we couldn’t keep our family apart any longer. The year was up and it was time to decide.”

Having Danny’s health insurance coverage for the family trumped everything. “It was important that our family had insurance. So, I knew what I had to do. The business sold in three days.”

She and the four older kids moved back to Michigan, where she dove back into real estate and land acquisition, soon developing Stone Hearth Restaurant, which was later sold and became what is now the popular Brick Street Bar & Grill in Grand Blanc.

Linda Hoff, president of League of Women Voters, is grateful for Sain’s strength. “At her age, she is absolutely amazing,” Hoff says. “She’s like a farm ox and keeps on going. There’s no stopping her. She’s still there for us at the League taking care of business, taking care of her family, and I find her to be so inspiring.”

“It’s all been such a good time,” Sain says, reflecting on her life’s achievements. “Sure there’s been heartaches along the way, but I’m strong because of the things I’ve experienced. “We can’t walk around like we’re in the land of the dead in this life. You’ve got to move forward, embrace change and seek out opportunities. That’s living.”