Every so often, a poignant moment or life milestone reminds Tracy Ramin of how fortunate he is or the reasons why he is still alive and thriving 24 years after losing part of his left leg and very nearly his life in a horrific accident.

The Montrose resident was struck by a speeding pickup while attempting to retrieve a ladder that had fallen from his construction truck onto I-75.

Now 50, Ramin has seen his two children, one of whom was born after the accident, grow into adulthood, held his first grandchild and refused to let having to wear a prosthetic limb prevent him from enjoying two of his favorite sports.

The 6-foot-3 Ramin, who played varsity basketball for Mount Morris High School, continued taking to the court for competitive games until about ten years ago.

His greatest sporting passion, however, is golf. Ramin’s love for the game grew after first playing it with his father at age 13. They later won a league title together.

“As an ambassador within the adaptive golf community, Tracy is working hard to improve events and participation on a global scale.”

Returning to the course a mere three months after leaving the hospital, Ramin began adjusting to his new normal and was playing in adaptive golf events less than two years later, gradually rising to a place among the top ten Americans in the World Rankings for Golfers with Disabilities (WR4GD).

This ignited a burning desire within him to help those with physical or mental disabilities to still enjoy the sport and expand competitive opportunities for them.

Thus far, the most significant result of the tireless efforts of Ramin and others was the first U.S. Adaptive Golf Open, held in July at iconic Pinehurst Golf Resort in North Carolina,the site of three U.S. Opens.

From an initial pool of 300 applicants, Ramin was the only player among the 96 selected for the historic event asked to speak at a pre-tournament banquet. He could not help but become emotional after being introduced by United States Golf Association Director of Communications, Beth Major.

“It’s so great to see everybody here,” Ramin told the crowd of more than 300 before thanking the USGA and revealing some unforeseen positive aspects of being an amputee. “I used to have to put both shoes on every time and now one of my shoes is already on, so I’m a step ahead. Also, I never had any friends outside of the United States before the accident and now, I have made friends in almost 60 countries.”

As a founder of the U.S. Adaptive Golf Alliance, a group aligned with 42 regional organizations and Executive Director of The National Amputee Golf Association, Ramin had been lobbying the USGA to create a U.S. Adaptive Open for years. 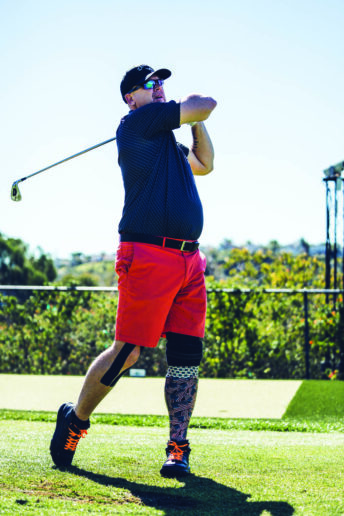 A turning point came when Beth Major attended the 2018 National Amputee and Disabled Championship at The Fortress in Frankenmuth, which Ramin helped organize and played in.

“The Adaptive Golf Alliance bringing so many adaptive golf organizations gave us a loud voice and Beth loved our tournament which led to positive conversations,” Ramin recalls. “A few months later, I was on a phone call with about 12 people from the USGA talking about how we can make a U.S. Adaptive Open happen.”

“Yeah, it was an incredible moment because adaptive golfers now had a major championship,” he says. “I was so happy for all the players who were going to benefit.”

Ramin applied for entry into the tournament in February, but preparing for it was going to require some work. He began sharpening his game which had taken a hit last year after he began a new job running a business which places massage chairs in malls.

“I felt I was going to get into the tournament because I had done so much to set it up, but was a little worried about how I might do because I had not been able to play as much golf and my handicap slipped to a three,” he says.

Soon, Ramin’s handicap began to improve, which was important because another major competition was looming sooner.

Ramin was named captain of Team USA for the Cairns Cup which pits adaptive golfers from the United States against a European team in a Ryder Cup-style series of matches. He led a 21-2 Team USA trouncing at The Shire Golf Club in London May 7-13. He returned home after celebrating with teammates and taking a drink from the Cup.

Just five days following that celebration, Ramin was officially notified that he made the U.S. Adaptive Open field. By the opening round on July 18, Ramin had whittled his handicap to about 1.7. He also takes pride in shooting scores in the 70s for 18 holes more regularly than before the accident.

Unfortunately, Ramin struggled to a 94 in the first round before rebounding for an 81 in round two and finishing with an 89. His 264 final score left Ramin tied for 51st in a field of 78 male entrants.

“I was hitting the ball well, but had trouble whenever it wound up in the sand,” he shares. “I struggled to find the best way to get the ball out of it which probably cost me 20 shots or more. I had a bunch of silly bogeys and took a nine on one hole, but the overall experience at Pinehurst was phenomenal.”

It’s difficult to imagine how Ramin’s commitment to furthering adaptive golf could be any better.

In addition to his U.S. Adaptive Golf Alliance and National Amputee Golf Association duties, he is a Michigan Amputee Golf Association board member, helps oversee WR4GD rankings and conducts clinics for disabled and special needs golfers around the country, including working with Shriners kids during the annual Shriners PGA Tour event in Las Vegas. 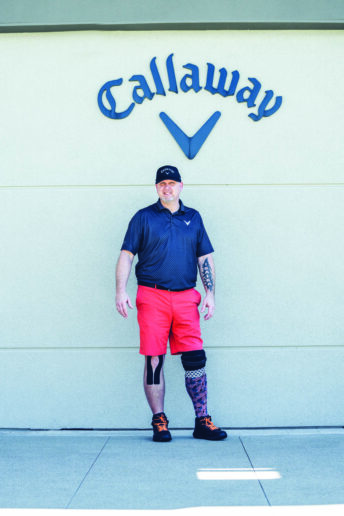 “Things I’ve been privileged to take part in, like a clinic in Houston for 200 kids missing both arms, are so important to show people who are disabled in any way that they can get out and play golf,” says Ramin, who was scheduled to lead a clinic for adaptive golfers during last month’s Ally Challenge at Warwick Hills. “You never know who you are going to inspire. “

Ramin’s loaded schedule also includes serving as a teaching professional at Briar Ridge Golf Course in Montrose. He provides roughly four lessons per week to golfers of all ages and ability levels. Last year, his students ranged from a three-year-old boy to a 92-year-old man.

“As an ambassador within the adaptive golf community, Tracy is working hard to improve events and participation on a global scale,” says Midwestern Amputee Golf Association President Bradley Schubert. “As a player, he is someone many others look up to. Tracy has a competitive nature, but is always willing to assist others in improving their games.”

That sums up Ramin’s mission in life. Clearly, he is one of the greatest examples of why everything happens for a reason.

Things I’ve been privileged to take part in are so important. You never know who you are going to inspire.

In the fall of 1998 Ramin, then a married 26-year-old father of a three-year-old son, was not far from home, traveling on I-75 to a job site when a 40-foot extension ladder broke free from his truck, landing between the right and middle lanes.

“I felt I had to get the ladder off the road because I was worried other drivers would hit it and possibly get hurt,” Ramin recalls. “I got out and the road looked clear enough.”

A semi was approaching, but moved to the left lane. Just then, a pickup truck emerged from behind the semi, passing it on the right at nearly 80 miles per hour.

“Then boom – lights out,” Ramin says.

Ramin’s right leg was broken, bones had been ripped from his left leg and his right arm was a bloody mess. There was a hole in Ramin’s side deep enough to hold a baseball while his head swelled to the size of a basketball. Ramin’s jaw was also broken in two places and his shoulders severely dislocated.

At Hurley Medical Center, Ramin lost all of his blood plus two pints as doctors fought frantically to save him. He was stabilized, but in a coma and given only a two percent chance of survival.

That was better than no chance and, miraculously, Ramin began showing signs of improvement. Within a week, he was out of the coma. After 24 days, he was out of the hospital, albeit with a makeshift prosthesis after his left leg could not be saved.

“I had no idea how bad it was until my mother and (then) wife explained everything to me after I woke up,” Ramin recalls. “I am a naturally positive person and there was no sense in crying about the situation. The leg wasn’t growing back.”

A long period of rehabilitation and recovery followed, including ten surgeries and continual re-fitting of his prosthesis as what remained of Ramin’s leg shrunk to the size it was permanently going to be.

He persevered, returning to the golf course within months and welcoming daughter Jules about 18 months after the accident.

In 2000, Ramin entered the Michigan Adaptive Golf Championship for the first time and discovered something.

“There were a lot of great players there, including past winners, which showed me I was not back to where I needed to be,” he says.

It took some time, but Ramin reached the next level, winning his first state championship in 2010 around the same time he was watching son Cruz become one of Montrose High School’s top golfers. 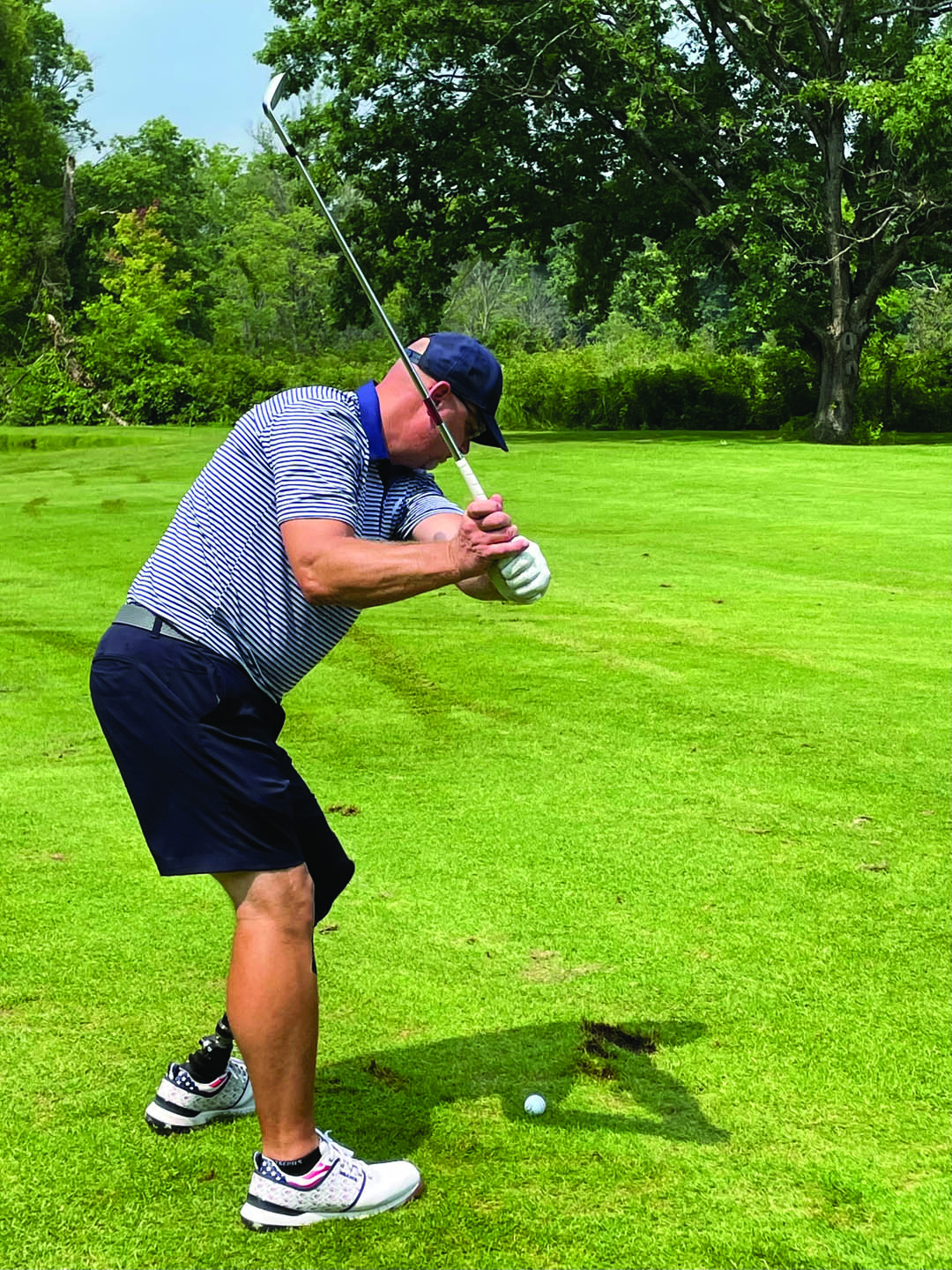 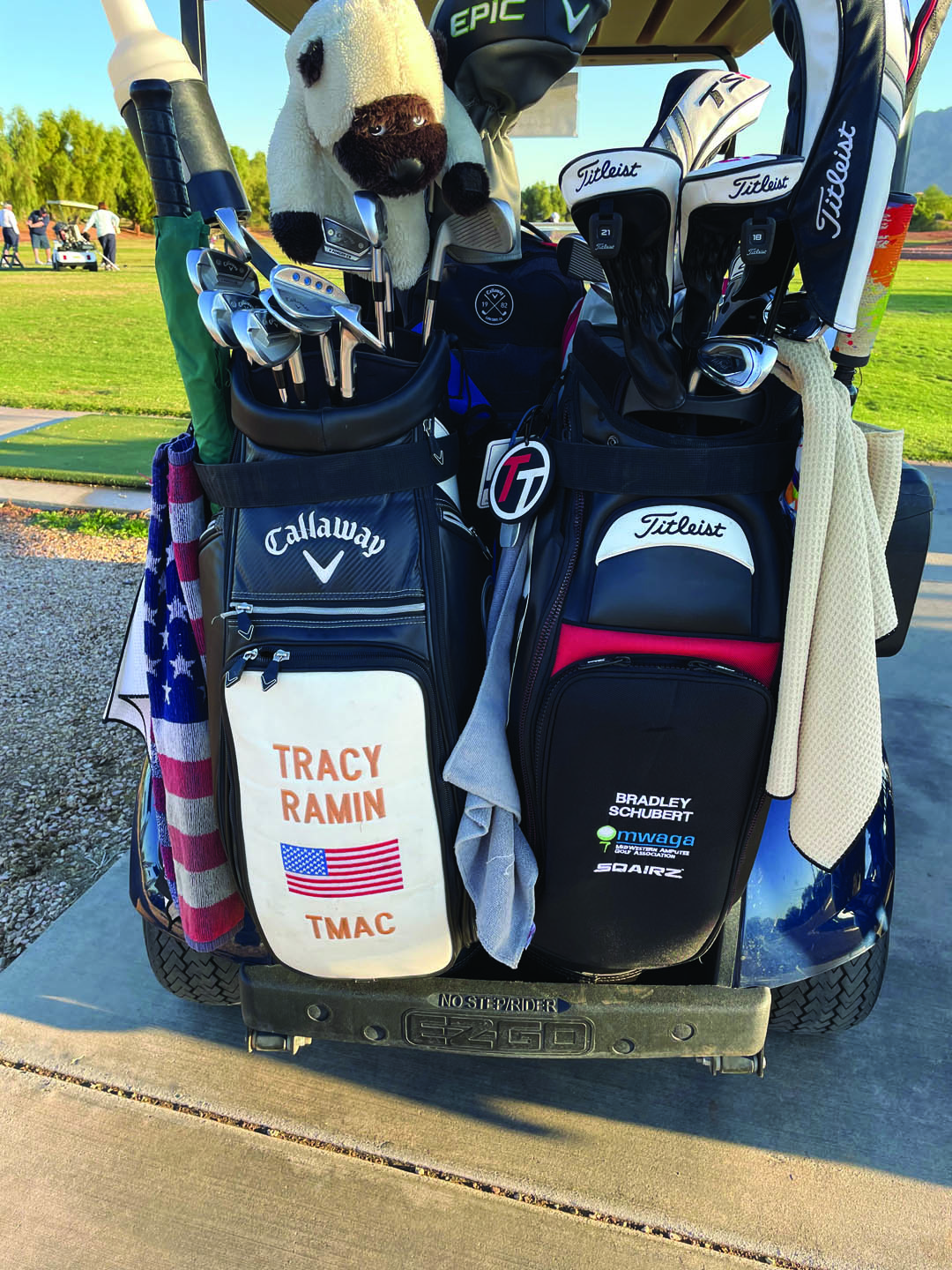 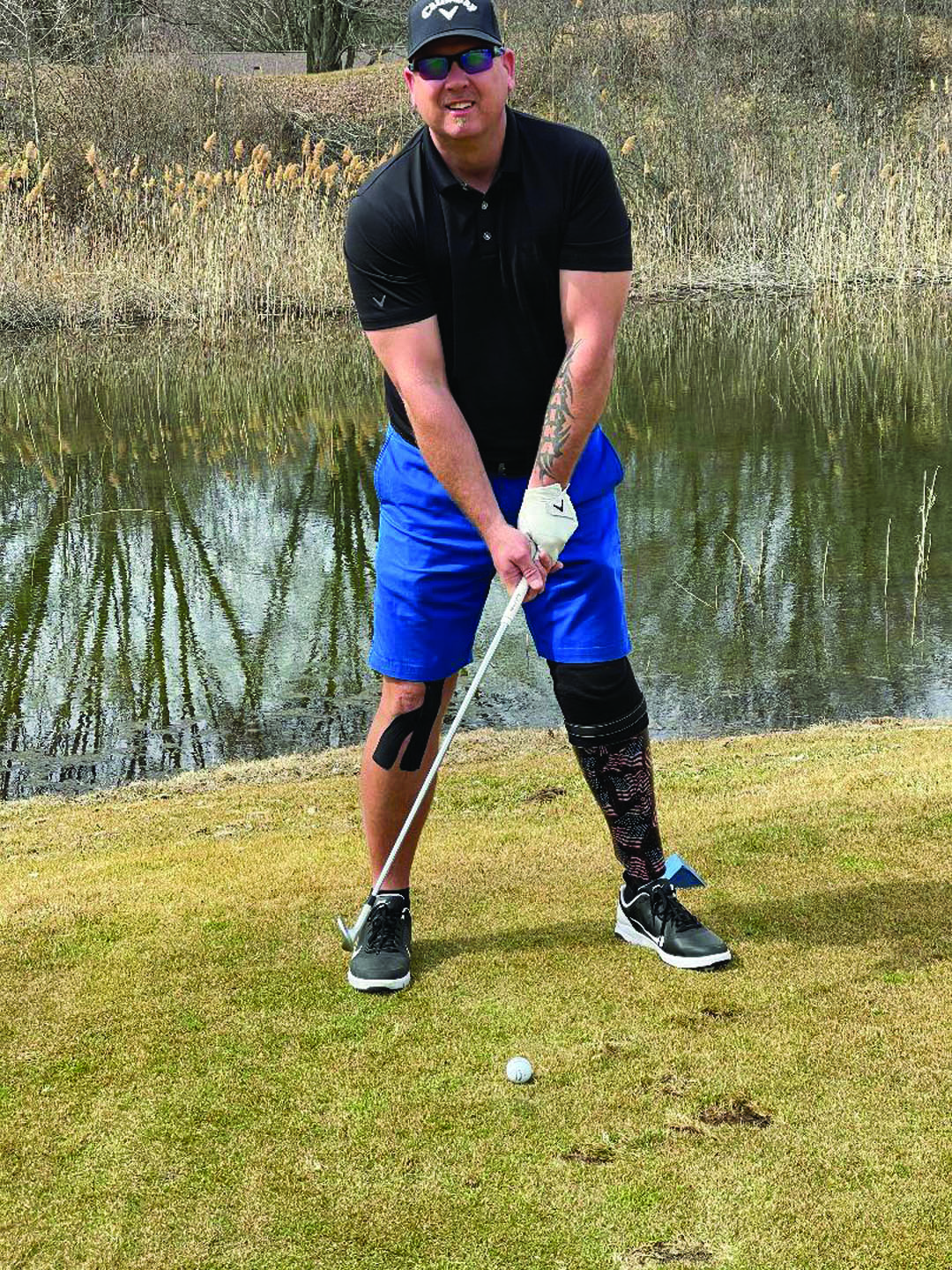 Ramin has won more than a dozen tournaments, including the Georgia State Golf Association’s inaugural adaptive championship by five strokes in 2018, closing with a 73 at Bobby Jones Golf Course in Atlanta. He also boasts several top-10 finishes at national events.

Golf equipment and apparel giant Callaway began sponsoring an adaptive golf team in 2019 and Ramin accepted an invitation to become one of its four members. Membership has its benefits as Ramin is fitted for new clubs every year at the company’s performance center in Carlsbad, CA and provided roughly two dozen golf balls and a dozen golf gloves per year.

“Tracy’s presence within and commitment to the adaptive golf community made him an ideal choice for us,” says John Mlynarski, Callaway’s Custom Fitting and Strategic Partners Manager. “There is also his well-rounded golf skills, especially driving power. Tracy is a great person and a very helpful resource for our adaptive golf efforts. He’s a rock star.”

Ramin’s next major focus is bringing adaptive golf to the Paralympics. Another one of his friends feels it will happen.

“Tracy has a real passion for golf and most importantly, the people,” says Michigan Amputee Golf Association President Bryan Biagioli. “He does an incredible job bringing the adaptive community together and is driven to see that adaptive golf gets into the Paralympics. He won’t stop until that vision is a reality.”

As for Ramin’s more immediate future, he is set to wed fiancé Tonia Allen early next month before competing in the National Amputee & Disabled Golf Championships in Celebration, FL October 24-28.

He will also conduct more clinics before the year ends.

“Many people go through life not realizing what their mission is, but God has shown me mine,” Ramin says. “I enjoy every day because I know better than almost anyone that tomorrow is not promised.” 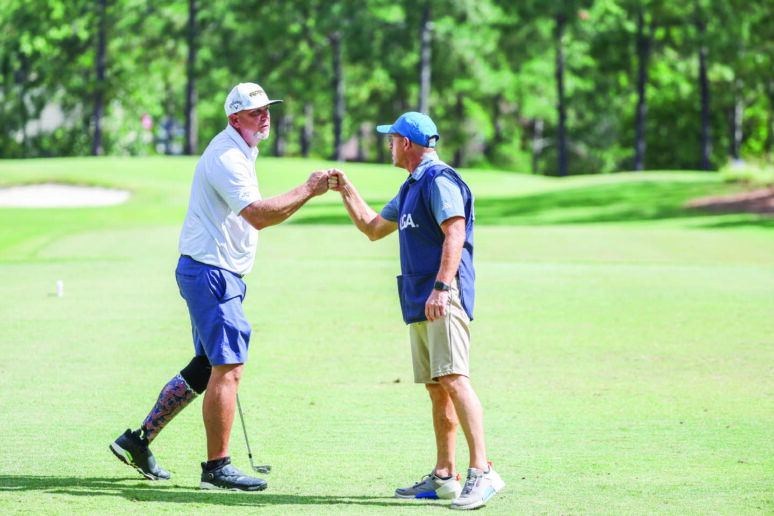