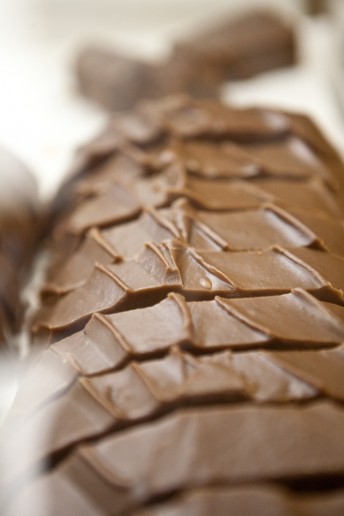 The minute you step off the ferry, you’re greeted by the delicious scent of Mackinac Island fudge! Its aroma is ever present – there are several different shops and more than one of each scattered around the island. They include Murdick’s Fudge Kitchen, JoAnn’s Fudge, Ryba’s Fudge, May’s Candy Shop and Murray Hotel Fudge Company. The rich, creamy and decadent treat is one of the island’s most popular attractions and a must-have during your visit. With so many flavors to choose from, the only problem is deciding which one your taste buds will love most.

The oldest fudge shop is Murdick’s Fudge Kitchen, which opened in 1887 as Murdick’s Candy Kitchen at a time when the island was becoming widely known as a vacation destination. According to Murdick’s, sailmaker Henry Murdick and his son Jerome (Rome) initially went there to construct canvas awnings for the new Grand Hotel. Rome started making fudge from his mother Sara’s recipe using a marble table, and soon began teaching his son how to make it.

Although Mackinac’s fudge industry struggled through some difficult economic times over the years, the Murdicks continued their family tradition, making improvements to the business by adding music and installing ceiling fans to carry the sweet aroma of fudge outside to passersby. Today, the company still follows Sara Murdick’s original recipe and uses the old-fashioned techniques that have been passed down through the generations. The Benser family is keeping strong the Murdick’s tradition of making high-quality, all-natural fudge, with the addition of many new flavors.

The temperate climate conditions on the island are perfect for fudge-making. According to Ron Steensma, General Manager, Murdick’s prides itself on being the only shop that uses only fresh and natural ingredients. “We still use real cream and butter in every batch!” he exclaimed. The most popular varieties are chocolate – including plain chocolate, double chocolate, chocolate walnut and double chocolate caramel sea salt. But it isn’t just the fudge that’s popular. They also sell a variety of nut brittles and toffee as well as caramel and cheese popcorn. During the summer months, Ron reports that the fudge shop, which has three island locations and one each in St. Ignace and Mackinaw City, will see anywhere from 900,000 to one million visitors.

Fudge is so popular on the island, there is a festival in its honor. This year’s Mackinac Island Fudge Festival happens on August 21-23 and includes a variety of fudge-inspired events. For most island visitors, buying fudge to take home to friends and family is a tradition. And if you happen to overhear one of the locals chuckling about the “fudgies” around town, rest assured that it’s just an affectionate reference to the thousands of tourists who visit the island each summer and simply must get a taste of that famous and delicious treat before they go home.
JoAnn’s Fudge
7408 Main St.